I only remember going to the Santa Claus parade in Toronto once as a child.

We grew up an hour outside the city and my Dad hates crowds. And lines. And crowds in lines.

But what a memory it is: my red mittens cupping hot cocoa that we brought in an old-skool Thermos. Watching my breath cloud into the winter air as I sat beneath a plaid wool blanket. And I remember watching the larger-than-life floats pass by, with their bright lights and music and smiling faces.

And of course there was Santa, in all his ho-ho-ho glory. And as his black gloves waved, I felt the magic of Christmas wash over my eight-year-old self.

Thirty-three years later, those memories are crisp. And they’re stronger than any other Santa Claus parade we ever went to for the rest of my childhood.

Because the Toronto Santa Claus parade puts your community parade to shame. Sorry, but it does.

And, yes, parking is ridiculous and, yes, you have to reserve a good spot pretty early. But sometimes that’s part of what makes the memory so, well, memorable.

So this year, I’m doing it. This Sunday (November 20), I’m taking my kids to the parade for the first time. They’ve been to the Santa Claus parades in Newcastle and Bowmanville, so I’m fully expecting this to blow their minds.

Between its 25 floats and 2,000 participants, Toronto’s Santa Claus parade is HUGE. And it’s also the world’s longest-running children’s parade and broadcast as far away as Norway and Ireland.

The parade has a lot of corporate partners that help bring the magic to life. In 2014, Maple Leaf Sports & Entertainment (MLSE) and the Santa Claus Parade began a multi-year partnership that’ll ultimately see $1 million invested over five years into the community through the MLSE Foundation. 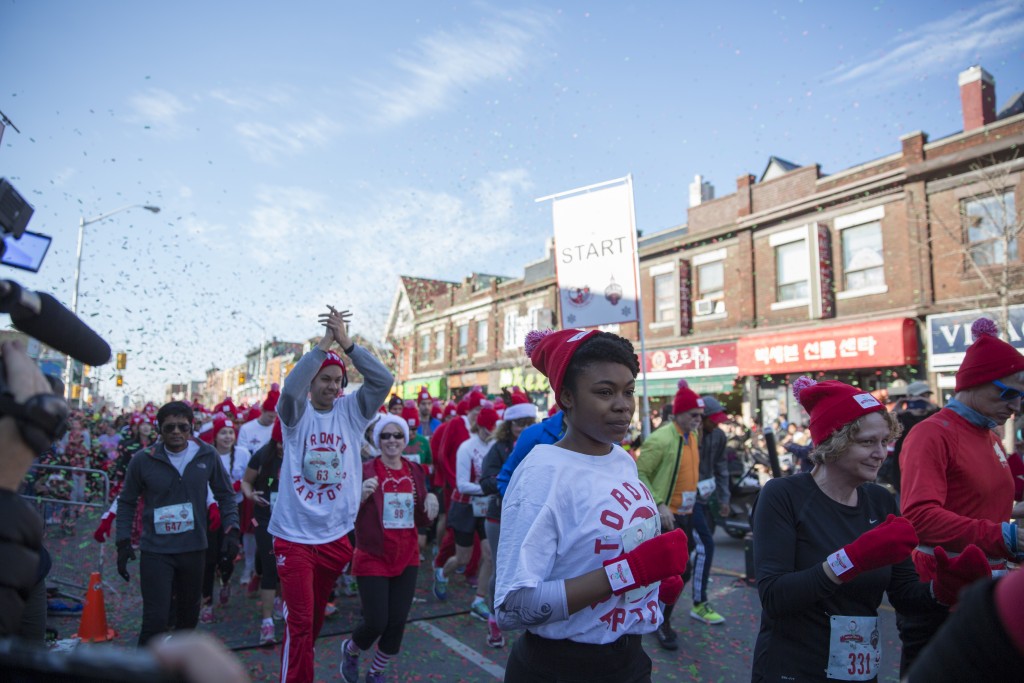 Running 5 kilometres with my family at the beginning of winter isn’t exactly my cup of tea, but it sure looks like these folks are having fun. And you appear to get a cute hat for participating, so… (Photo credit: Light Imaging.)

A big part of MLSE’s parade partnership is the Holly Jolly Fun Run. If a 5k run with your family sounds like holly jolly fun, act fast because it’s almost sold out.

Off I go to pack some red mittens, a wool blanket and some delicious hot cocoa…