We were at The Post Hotel in Lake Louise, and the “house car” — as it’s often called at fancy hotels — was a slick, black SUV.  We hopped in the back, greeted with heated leather seats, and I scanned the interior for clues about which luxury auto company made this gorgeous beast.

“It’s a Toyota,” answered our friendly driver, when I finally asked.

TOYOTA? We were in a Toyota Sequoia.

I was expecting to hear Cadillac, Lexus or Infinity. Not Toyota. And that’s not a mark against Toyota in any way — but it’s a vehicle brand I associate with soccer moms and minivans. Not typically with luxe.

So when we took a recent trip to Tremblant for some family skiing, Toyota Canada was kind enough to loan us a 2018 Toyota Sequoia to test drive and review.

From our home all the way to Chateau Beauvallon, the 2018 Sequoia was a pleasure to drive.

The Toyota Sequoia is big. Really big. As a CUV owner, I can tell you that the amount of space you get in the Sequoia is far, far greater than even the biggest CUV on the market. I had more room on either side of my seat, the kids had plenty of space, and with the third row of seats tucked away, all of our luggage and ski gear for a five-day trip fit with ease. I estimate it provided the same amount of storage as Big B’s Ford F150 — and that’s a lot. 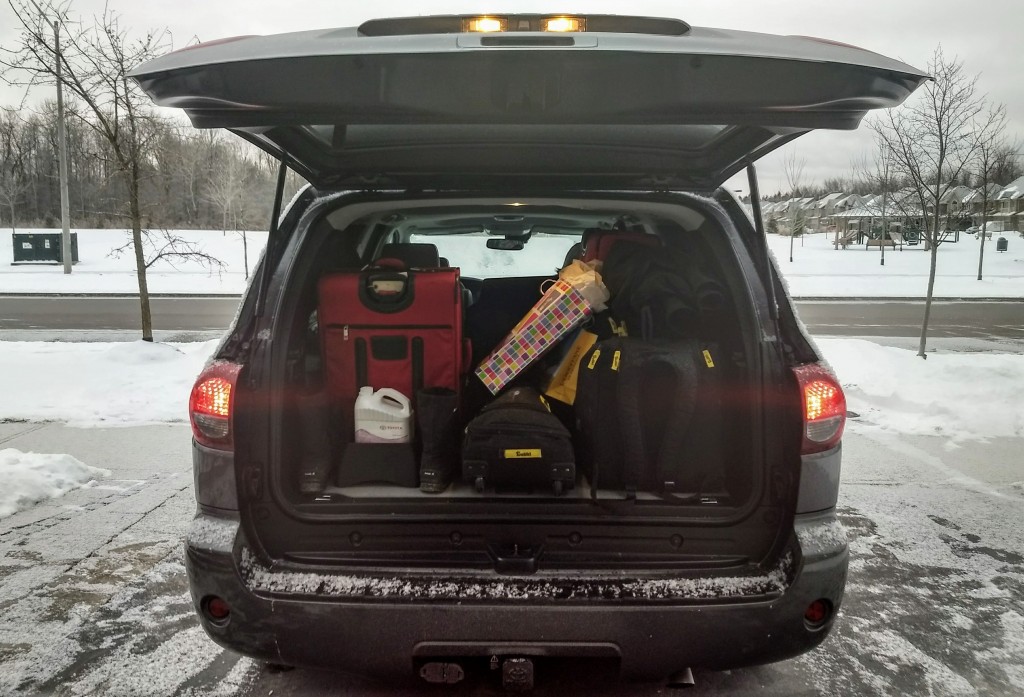 Ski equipment and apres outfits galore, with room to spare!

Speaking of that third row, the seats not only go down but they literally descend into the vehicle rather than simply folding forward. This is what gives you so much extra space when you don’t need those three extra seats for bums.

Probably my favourite feature of all in the 2018 Sequoia is the Toyota Safety Sense package, which includes automatic high beams, a lane-departure alert, pre-collision system with pedestrian detection and dynamic radar cruise control. Now, I already have lane-departure and collision prevention alerts on my personal vehicle, so these were nothing new to me. However, the auto high beams and dynamic cruise control totally WOWed me! If you live semi-rural like we do, you know that high beams are a must on country roads at night; on hilly roads, though, you can be in a constant state of high-beam management. On. Off. On. Off. You get the point. Toyota’s Safety Sense high beams automatically detect oncoming vehicle lights and both turn themselves off and back on again when the road ahead is dark again.

The cruise control is similarly magical and was, without a doubt, the best thing about our road trip test drive. I am a bit of a leadfoot, so I like to use cruise control to ensure I don’t get speeding tickets — especially on long road trips, where I’m often on auto-pilot as I deal with hungry or bored children. But on any given highway, you’re bound to come up to other vehicles who aren’t doing a strategic eight kilometres above the speed limit, and you need to break to shut off the cruise and then resume it with a press of a button when you’re in the clear. Not so with Toyota’s dynamic radar cruise control! You can set it to detect vehicles up to three different distances ahead and respond based on those in front of you. We liked the farthest setting best, and at one point, I had the cruise on for two hours straight and never once had to touch the brake or gas pedals.

The 2018 Toyota Sequoia is a really nice looking vehicle, inside and out. Nice details everywhere; its buttons and controls are within good reach of the driver’s seat; leather seats are standard; running boards that made it easy for my littles to get in and out on their own. The standard 4WD was ideal for winter conditions in Tremblant. 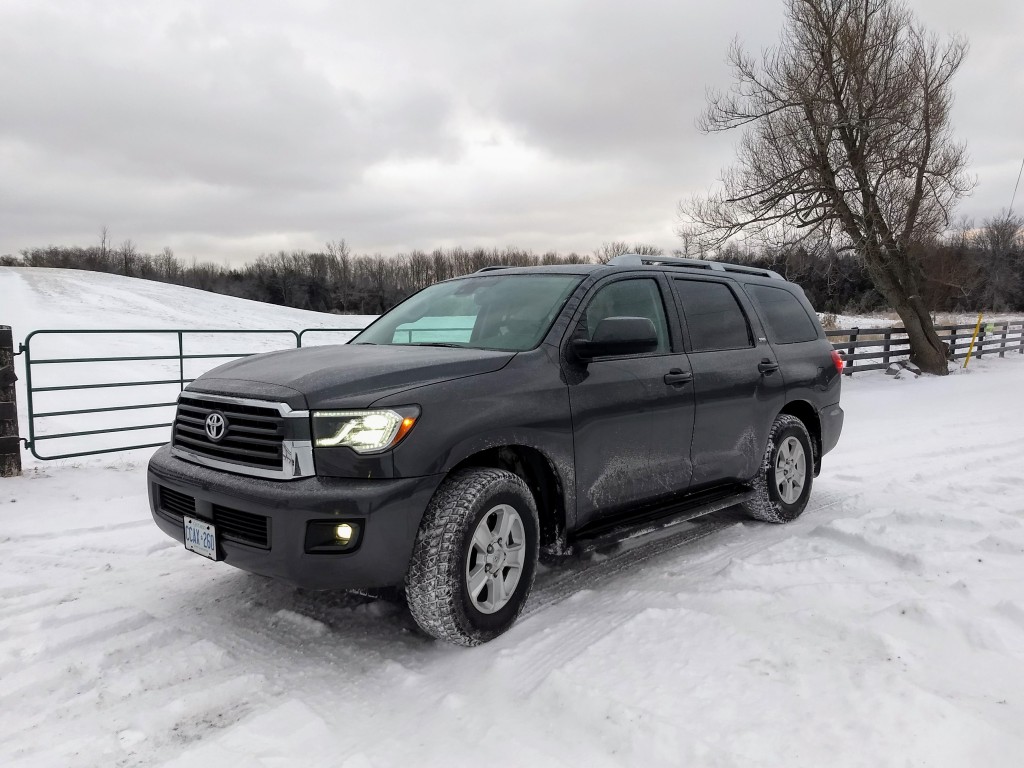 Driving the Sequoia is an exercise in powerful control. For its size, it speeds up beautifully without that tugging feeling you sometimes get when you ask a large vehicle to move faster than it really wants to. Our drive involved a lot of different situations, from side streets to long highway stretches, pit stops and quick stops. Roundabouts and three-point detours. It handled perfectly in every scenario. And I liked sitting up so high!

I’m not an actual car geek who is capable of properly discussing some of the more technical aspects of this SUV, so I’ll direct you to this news release that has more info if you really want to nerd out.

There’s a backup camera, of course, which I couldn’t drive without anymore, but there are also sensors at the front of the vehicle — something I wish my personal vehicle had! These are incredibly helpful when you’re parking a full-size SUV, especially if you’re not used to something so large.

We listened to the built-in Sirius XM radio most of the way, and sound quality was excellent — even when tested at higher volumes.

I’ll admit that I was disappointed we didn’t get to test out the higher-end model in the Sequoia lineup — which was likely the one we experienced at The Post — so it’s difficult for me to call the entire Sequoia range “luxury.” For a starting price of $60k for the SR5, I would definitely expect even the base model to come equipped with basics like GPS navigation, several USB ports and a standard plug outlet; ours had none of these (OK…I think it had one USB port). Without question, I would fork over the extra $15k to upgrade to the Platinum model, which is a really good price point for a vehicle I do consider luxury class.

If you’re quite tall — in the 6’4″ range or taller — you’ll probably find your knees get cramped in the Sequoia. Big B is 6’6″ and had aching knees halfway into our 5.5-hour drive to Tremblant; we switched seats then and on the way back home. He was fine in the passenger seat, but found his head was within an inch or two of the roof no matter where he sat. Keep this in mind if one of the vehicle drivers in your home is gargantuan like my husband. I’m 5’7″ and had more than enough space in every direction.

You need to learn in advance how to set and use the dynamic radar cruise control, since it’s not totally intuitive — especially during highway driving. Once you do it a couple of times, it won’t be an issue, but don’t wait until you’re already on the road (like I did) to learn how it works. If it’s slushy and gross outside, you might end up with Mother Nature totally screwing your radar detector and the cruise won’t work at all. Sometimes this cleared on its own, but it definitely impacted the cruise control use at times. It is still my fave feature, though!

We didn’t find it great on gas. Not the worst of any vehicle we’ve driven, mind you, but not awesome. That said, it hadn’t broken the 15k mark on the odometre and it’s likely more efficient after the engine’s been more “warmed up.”