I’ve always said that whoever invented winter didn’t have babies.

Going out for walks is a daily pleasure for us; barring temperatures dropping below, say, minus-25, we go out every day regardless of the weather. We’re like the postman.

But I would get soooo frustrated that it took 20 minutes to gear up and get out the door in wintertime. Venturing out in the car in the snowy season isn’t much easier. When The K Man was really little and still in his first (portable) car seat, colder weather wasn’t the hell it became once we had to install the permanent car seat, when we could no longer do all the fussing about indoors. Gearing up the two of them? It sucks the big old suck-suck.

While the JJ Cole Bundleme is a great alternative to a blanket in fall and spring (and also does a great job keeping the stroller seat clean), it just isn’t warm enough for the really chilly days we get here in Ontario between December and March – sometimes April. And, as a side note to parents considering purchasing a Bundleme: be sure to purchase the “toddler” size, even if it’s for your newborn. That way, you’ll get more than just one season out of it, and if your child is smaller-than-average, you might get three.

Not only is our Bundleme not warm enough for our winter walks, it doesn’t help us get out the door any faster either. Enter the 7 a.m. Enfant Blanket 212 evolution – described by its makers as “the ultimate baby bunting.” This is no lie. This is, without a do 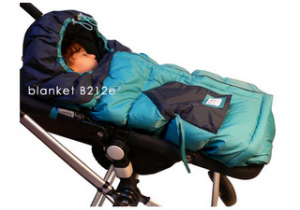 ubt, one of the best investments we’ve made between both kids. And make no mistake – it is an investment; at about $200, you want to be sure that you’ll get enough use out of the thing to bring down your price-per-use (calculated by taking the total purchase price and dividing by the number of times you use or wear an item).

And this is precisely the reason I’m reviewing a winter item on the outskirts of spring: maybe, if you’re lucky, you can find the Blanket 212 evolution on sale right now.

The number one reason we bought the 212 evolution? It replaces the snowsuit. Yes, replaces! I just throw a light hat on my little one (if it’s extra cold, otherwise the built-in hood suffices) and strap her into her stroller, engulfed in this über-blanket. This allows us to get out of the house in less than five minutes, just as we do in the summer.

None of the gaffes are deal-breakers, though. The sheer ease-of-use and the efficiency it brings to my winter days make these small things not worth sweating.

« Utterly Yours breastfeeding pillow
Rock•ease by Teethease: the fashionable teether »