By now, whether you live in Canada or not, you’ve probably heard about the devastating forest fires in Fort McMurray, Alberta.

And while we’re now hearing about people posing as Fort Mac evacuees to take advantage of Canadian generosity, these are few and far between among a glut of gracious hospitality, donations, fundraisers and downright selflessness.

It is a proud time to be a Canuck.

Evacuations were so swift that brides-to-be like Natasha Newman were forced to leave town without their wedding gowns, still at the seamstress for alterations. Heartbroken and unable to buy a brand new wedding gown (if you’ve been married, you know that just one is expensive enough!), she turned to Facebook: 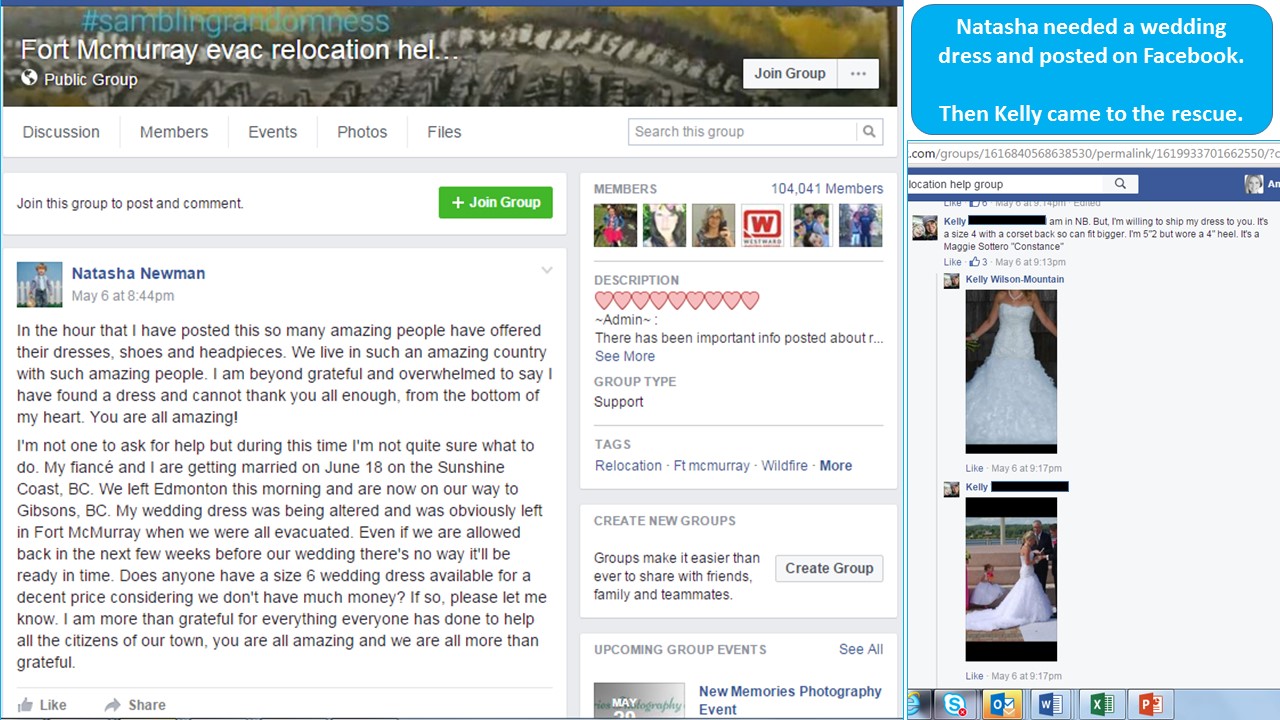 More than 50 people shared Natasha’s post and many posted available wedding dresses. But along came Kelly, who offered her beautiful gown for free.

But then there was the shipping. Kelly and her dress were in the Maritimes, but Natasha and her fiancée had gone to British Columbia to stay with family. And with a wedding in just a few weeks, economical ground shipping would be too risky. Kelly worked social media and got Air Canada’s attention.

Ultimately, Air Canada Cargo’s crew personally picked up the dress from Kelly in Saint John, and it flew (solo) first to Montreal and then onto Vancouver. More than a dozen employees were involved in the logistical juggling act, and the team has also agreed to return the dress to Kelly should she want it back following Natasha’s wedding. 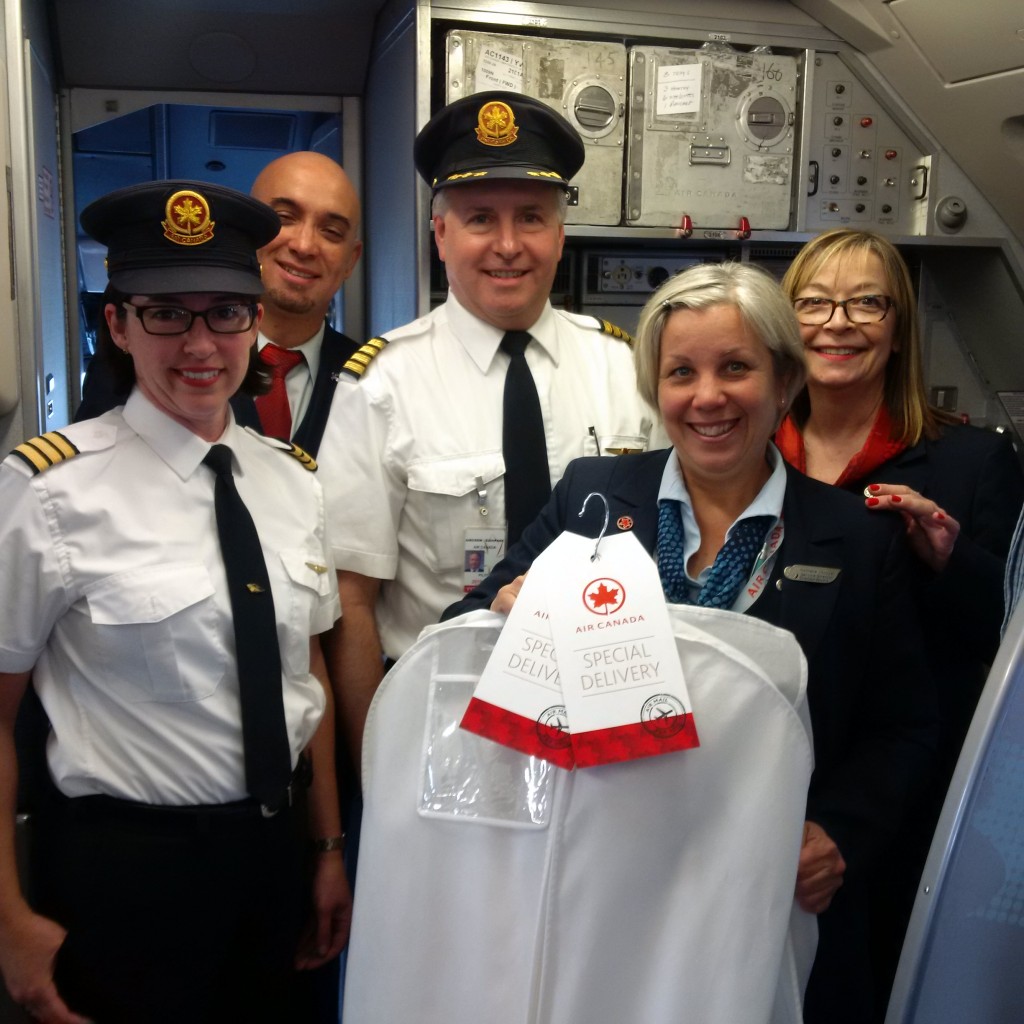 Natasha ended up with more than just a Good Samaritan story, however, because Air Canada also gave the couple two tickets to anywhere in North America along with two Maple Leaf Lounge passes to use when they’re ready. Hello! 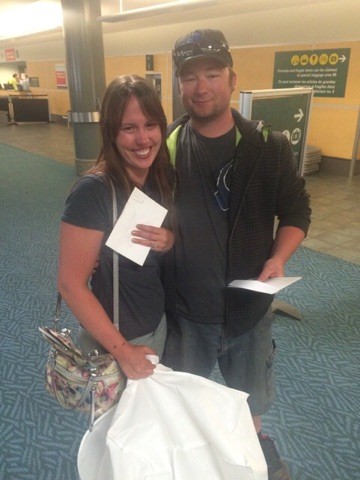 Natasha and her fiancee pick up her donated dress in Vancouver thanks to Air Canada Cargo.

I chatted with Natasha over the weekend, who was — clearly — deeply moved by the experience. Although Cancun is high on the list, they haven’t decided where to honeymoon using those two open tickets. But the soon-to-be-wed couple wanted to share a heartfelt thanks to everyone who has helped make their special day more memorable than they ever could have imagined:

“We cannot begin to thank all the kind people of Canada who have come together throughout this hard time for all of us Fort McMurray residents. Kelly and Air Canada really went above and beyond to ensure we have a wedding we deserve. If it wasn’t for Kelly who so graciously offered up her dress to me, none of this would have happened; she was the one who asked Air Canada if they could help. When we heard Air Canada Cargo agents were personally flying up my new dress, we knew it was in good hands. When we went to pick up the dress in Vancouver and the agents handed me my dress along with the free flight tickets for our honeymoon and passes for the Maple Leaf Lounge, I was overwhelmed with the generosity of everyone involved. We don’t have much extra money, so we weren’t planning much of a honeymoon. After all we’ve been through, it’ll be amazing to have a little vacation together after our wedding. This is nothing we ever would have anticipated and cannot thank Kelly and Air Canada enough for everything they have done for us — we will never forget their generosity.”

Natasha, I know that I speak for the rest of this great country when I say congratulations on your upcoming nuptials! You do deserve a fabulous wedding.

Please pay attention to the kinds of donations residents and evacuees need rather than just purging your home of stuff YOU no longer want. If you aren’t close enough to drop off donations at the Edmonton warehouse (3870 98 Street), consider donating to the Canadian Red Cross — or directly to the Alberta Red Cross branch. Last time I checked, the federal government was matching donations dollar for dollar, making your monetary contribution go twice as far.

Let’s continue to do our countrymen proud.

« Canada’s Wonderland thrills the kid in you
Petite & Posh Vaughan »