I’m often carrying around two or three phones with me at any given time. I have my smartphone that’s used primarily for work (my other work: my day job in PR) and then I’m usually reviewing a phone or two as well.

And while I’m no tech nerd, I do love the convenience technology offers — and I’m no stranger to offering my phones to the kids to make running errands a lot easier to manage without the “are we done yet?” whining.

So if you’re here to find out how the Alcatel OneTouch Idol3 smartphone performs with a busy working-mom lifestyle, this is the review for you. However, if you want to know technical specs and other fancy techy things, I suggest you head on over to MobileSyrup instead.

Overall, it’s a good-looking smartphone that sits well in the palm of your hand. I have relatively small hands and it doesn’t feel too big in them. And the slightly curved backside reminds me of the Moto X (though it’s not as curvy).

The Idol3 comes with a USB cord and wall adaptor — the latter of which is a nice addition considering the lower price point on this phone.

I found it really easy to operate right out of the box, without needing to look at a manual or even the quick-start guide.

Overall, the biggest selling feature of the Idol3 is that it’s pretty inexpensive compared to many other smartphones. If you’re considering the major smartphone players, a two-year contract can get you an iPhone6 right now for around $350 (plus cost of plan), while a Samsung Galaxy S6 is ringing in around $200. But the Idol3? $0. Yep — you read right. I just saw it available with a major Ontario mobile service provider for free when you sign up for a two-year term. Just think about how many lattés you can buy with the $200 you saved…

Idol3 has nice, big screen that floods the picture right to the edges of the phone, which is great for watching videos or playing games. Both of which my kids do without fail every single time they get their hands on a smartphone!

It operates like any other Android phone, so if you’re used to Android already, this will feel very familiar.

Its pulldown menu leads easily to shortcuts and settings.

The “one touch” (get it?!) access points on the Idol3’s home screen are intuitive and easy to navigate: back, home and open apps.

For those of you who like to improve readability on your smartphone screen, this one comes with four font-size options.

Some of the available gestures are neat, albeit not exhaustive or overly innovative (turning over phone to mute a call, for example). 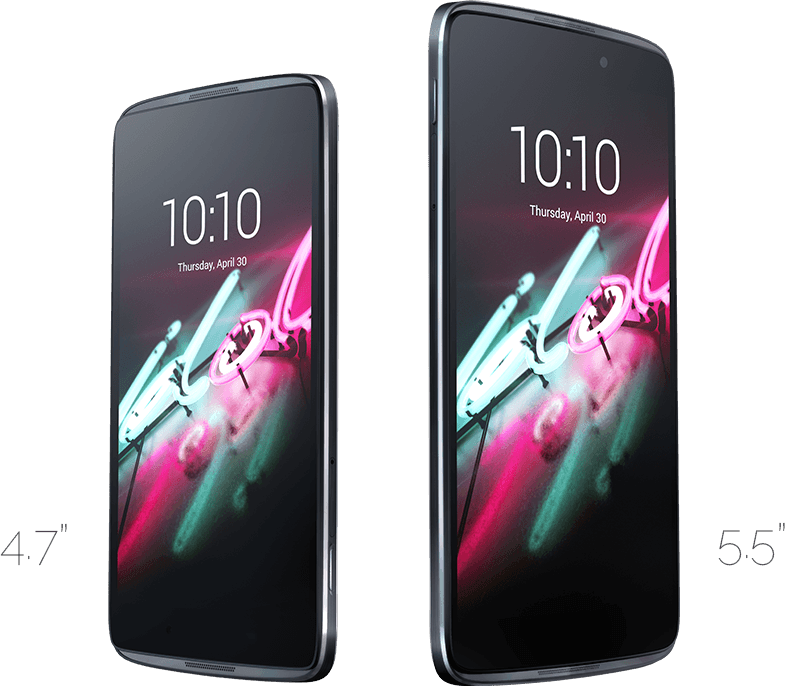 The only thing that I really hated about the set-up was that I had to rummage for a paper clip to open the SIM card door. Honestly, just include something in the packaging. Alcatel is not the only brand guilty of this.

From the lock screen, it was nice at the beginning to have instant access to the camera, phone, calculator, selfie-taker, music, contacts and QR code scanner (although, does anyone really use those anymore?). However, somewhere along the way, most of these have disappeared and now I can only make emergency calls or grab my camera from the lock screen. Huh.

I set it up to double tap the screen on and off (otherwise, you have to push the power button every time it goes to sleep) — but it’s temperamental and sometimes that double tap becomes a sextuplet tap verging on a double punch to the throat. You know, if the Idol3 had a throat.

I CAN UNLOCK THIS PHONE WITH MY EYEBALLS!!! But only sometimes. Sometimes it tells me my own eyes do not match my eyes. So there’s that. And then I have to use the PIN anyway.

Speaking of the PIN… Going from lock screen to PIN to an unlocked screen takes a LONG time. And it drives me cray.

The biggest problem for me with the Idol3 is that there are no voice-activated commands. This will be a problem for car commuters like me who are constantly begging Siri to take a note, jot down a reminder, add a calendar event or text your husband to bring home organic milk. I absolutely cannot function with a phone that doesn’t do what I say.

Compared to every other smartphone I’ve used, the Idol3’s sound quality when talking on the phone isn’t amazing. Which is odd since the volume on games and videos is pretty good.

Not a deal-breaker but definitely a gaffe worth noting, the Idol3 holds a charge about as well as iPhone6 — but can’t hold a candle to the Samsung Galaxy lineup. Battery life is just not very good. When in standby mode, I find that the battery can last for a couple of days. But with heavy use, you won’t make it through a full day. Not even close. If I use it during my 45-minute train commute, for example, then on and off throughout my workday, I rarely had enough battery left for my return train ride. This is pretty similar to my iPhone 6, but pales in comparison to the Samsung Galaxy S5 (and I imagine the new S6 as well).

It gets very, very hot when charging or during heavy use. That sorta freaks me out.

« Lab Consignment: high-end designer style for less
FALL in love with Wheat Canada (because it’s hard to “autumn in love”) »