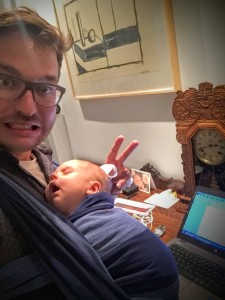 Guest reviewer Zack Sandor-Kerr has never, ever written an honest-to-goodness product review before. This may seem surprising, given that he has no shortage of opinions on the products he chooses and the lengths he goes to learn about them. Zack works in the communications biz, with fellow word nerd, Andrea [editor’s note: that’s moi].

Living in Toronto, Zack is a rookie dad to an eight week-old fellow named Jasper, the not-so-rookie husband to a mega-babe named Kaitlin and a long-time appreciator of a well-executed high five. Zack cultivates a variety of interests, including boardgames, whiskey, backyard curling and most recently, urban beekeeping.

While my yet-to-be-born son was peacefully chilling in utero, plotting his grand entrance, Andrea asked me many of the water cooler (OK, we don’t have a water cooler; we have a kitchenette) questions that veteran parents ask of their newbie colleagues: How’s your wife doing? (Pretty darn well, all things considered.) What’s her due date again? (End of May.) Have you picked out names? (Yup, but they’re all secret…let’s just assume we’re calling him Albus Percival Wulfric Brian Sandor-Kerr.) Are you ready? (Ummmm…)

And most notably: “Have you got all your gear?”

At that point, we had a pretty good load. We had most of the big items covered – our guy has a few older cousins, so we inherited a lot of lovely equipment (including a great-grandfather-made rocker, bearing the names of all the babies who had slept in it, dating back to 1983). But we didn’t know what we didn’t know… and I was sure we were missing some things.

“Do you have a bouncer?”

“Oh, I really don’t think Jasper will need one of those for quite some time,” I replied, confident in my knowledge of both the Compendium of Tiny Human Equipment™ and the Baby Gear Usage Continuum™. Andrea gave a knowing smile, and suggested otherwise. I had in my brain a baby jumper, not a baby bouncer. Rookie mistake.

And that brings us to the Bjorn Bouncer Mini. Contrary to my initial inferences, this contraption is not a doorway-mounted aerial acrobatics machine; but rather the lovechild of a hammock and rocking chair, made for very small humans. 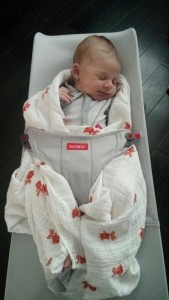 This ergonomic baby day bed features simple construction, clean lines, and minimalistic design. All things that I like.

We live in a small row house in Toronto. Space is at a premium at Sandor-Kerr Manor. We don’t have room for bulky, plastic, rainbow-coloured baby accoutrements with large footprints and improbable folding mechanisms. We were intentional about selecting low-profile gear that would stow away easily, and wouldn’t dominate our place. This bouncer’s simplicity is what makes it great.

And speaking of simplicity, unboxing and setting it up was a breeze. Snapity-snap the frame together, a little slidey-slidey of the fabric over the frame … and voila! You’re done. 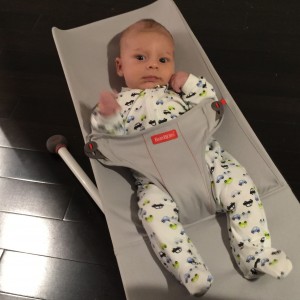 When we first put fresh-out-of-the-womb, newborn Jasper in the bouncer, he seemed happy enough. The seat held him in a natural, comfortable-looking position. His head, neck and back were well-supported. The harness is simple to use, and fastened easily. The two lateral arms of frame are springy metal, giving a pleasing bounce when the baby is in place. I initially thought that with a little force, I would catapult the little guy into the next room; it was not so. We set him down and gave him a little rhythmic bounce with our feet, and kept the little dude happy enough to for us to shovel a few forkfuls of dinner into our weary mouths before he grew tired of his new toy and erupted into shrikes and gesticulations of dismay.

As he has grown a little older, bigger, stronger, his threshold for bouncing has increased. At eight weeks old, we can now set him down for longer stretches of time. These days he’s topping out at about 45 minutes of contented bouncing before he gets ornery and demands a change in scenery. Incidentally, that is his parents’ threshold for going without snuggles, so it all works out well.

In a recent bouncing session, we encountered the Great Bowel Eruption of 2015. Suffice it to say, we were granted the opportunity to test out the washability of the bouncer’s fabric seat. For this, I give it top marks. With its simple design, it was just as easy to remove the fabric as it was to put on. Following the washing instructions, we gave it a good clean, and the seat came out looking as good as new. Back on the frame and we were back in action.

The bouncer is adjustable, with two settings. The more upright configuration leaves the little guy just as well supported and comfy as when reclined, and affords him a different vantage point from which to ponder the universe.

There isn’t really much to complain about with this wee contraption.

Our one (relatively minor) gripe pertains to fastening the harness. It features a simple design with no moving parts, which suggests to me this thing will withstand the test of time—which is excellent. One end of the fastener has a slot; the other end is a disc that slides through the hole and holds things in place. It’s adjustable, with two size settings. As I mentioned earlier, it’s easy to secure the little one into the harness. However, detaching the harness is slightly more clumsy. It’s not hard, it’s just not as seamless as everything else. As he has gotten a little bit bigger, I’ve noticed that a little more pulling action is required to get enough slack to thread the disc through the slot. Add a flailing, wailing baby who is demanding out of his seat immediately, and it becomes slightly less convenient. And after an unfortunate hand injury that has put my non-dominant thumb out of commission, all of my baby gear now—by necessity—needs to pass the one-hand test. In this case, I wonder if your standard clip wouldn’t do the trick. Like I said, it’s minor. Operating the fastener isn’t hard. It’s just cumbersome to de-fasten.

« It’s #VarageSale: a virtual garage sale…get it? (Twitter party on Aug. 5!)
Tieks: a two-year update on my fave flats »