It doesn’t matter how old my kids get, they still love to be carried. The trouble is, at nearly 30 lbs. and 50 lbs., respectively, Miss Q and The K Man are darn near impossible for me to carry longer than a couple of minutes without a baby carrier.

Of course, it sounds pretty strange to call it a baby carrier when I no longer have anyone who resembles a baby. But call it a child carrier and it sounds more like a stretcher than an upright, soft-structured carrier.

About a month or two after I reviewed the Boba 3G – unquestionably one of my most-read posts of all time – the Boba Family company unveiled the BobaAir. It immediately landed itself on The Covet List, and I’m thrilled that Boba’s Canadian distributor sent one for me to put to the test.

Incidentally, if you’re going to be doing a lot of babywearing this spring, please check out my article in the spring/summer 2013 issue of Pink & Blue Mag (pages 20 & 21), where I showcase some of the best babywearing outerwear. And don’t forget that I’ve done a comparison of some of the best – and worst – babywearing apparel available, too.

Less than a pound. That’s how much the BobaAir weighs. What else weighs just 0.7 lbs.? A small head of broccoli, several sheets of paper, a Venti latté, perhaps… Anyway, you get the point – this baby carrier is super-light. If you can’t manage to carry this around in your purse, there’s a problem. 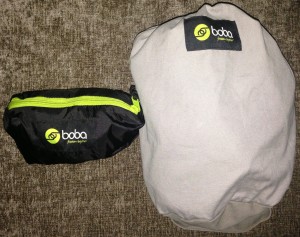 BobaAir on the left, versus the Boba 3G in its stuff sack on the right.

It folds into itself. I’m showing my age here, but remember K-Way jackets? Those sweet wind-breakers from the ’80s that don’t give a rat’s ass that you might be sporting a womanly shape underneath? Remember how awesome it was that you could just stuff your entire jacket into the hood and toss it into your school bag? Well, the BobaAir does the same thing – you literally just shove every corner of the carrier into what is otherwise its front pocket. I’m telling you, this thing packs up into NOTHIN’! Not that the Boba 3G is even a very bulky carrier to tote around, but see the difference in the photo to the right. This is the ultimate baby carrier for travel. The only other baby “carrier” I’ve seen pack up this small is the bamboo Monkeywrap, which of course is better for tiny newborns but is not going to comfortably hold a baby weighing in at more than 30 pounds.

On that note, it has a big front pocket – hallelujah! If you have a soft wallet, you can store it here. Just be mindful of putting keys or phones in it because the nylon is so thin and you don’t want anything digging into your baby’s spine or preventing your babe’s back from having a nice, round curve.

With it being so lightweight, you’d think you wouldn’t be able to carry much more than a baby in the BobaAir. You’d be wrong. It’ll support any baby or child in the 15- to 45-pound range – which for most people will take them well into their child’s fourth year.

The nylon fabric means you can wipe off spills with ease and that the hood can actually act like a rainhood if you’re running to and from the car, for example.

At about $70 to $75, the BobaAir is well-priced for a carrier with serious convenience-factor.

It features the same military-grade buckles that I love on the Boba 3G. Ultra-secure.

Like its sister, the Boba 3G, the BobaAir’s waist and shoulder straps are very generous and will fit the vast majority of babywearers.

But let me tell you this: aside from travel, I could see this being a pretty stellar option as a baby carrier for twins. Without any of the bulk associated with other soft-structured carriers (SSCs), you could put one on your front and one on your back and not feel like a pack mule. Well, at least I don’t think you would. I have never actually been a pack mule nor a mother of twins.

And yes – that means both front and back carries are both possible; but…

…I found the back carry much more challenging to do on my own with this carrier. Because the straps are so much thinner, they don’t just catch and slide onto your arm and shoulder without twisting to and fro. Perhaps I’d been out of practice, as well, since I don’t wear Miss Q nearly as much as I did when she was just getting mobile last summer, but without the added weight that other SSCs have on the straps, I found it trickier.

You just can’t have it all. Something as light and compact as the BobaAir has to come with a little bit of sacrifice, and where this really shows is in the lack of padding on the straps. If you’re carrying a baby who’s less than 20 pounds, you probably won’t notice this as much. But as I carried Miss Q and approached the 30-minute mark, I could feel the straps digging into my shoulders – only a little, but I could feel it. So while the BobaAir would absolutely be my carrier of choice if we were going on a trip, it’s only because she generally doesn’t want to be confined for longer than 10 to 15 minutes here and there throughout the day. If you have a 23-pound baby monster on your hands who doesn’t yet walk and is happy to be carried for several hours at a time, however, this may not be the right carrier for you.

Similarly, the nylon is so thin (durable but super-thin) that if your baby’s legs dangle beyond the knee out either side of the carrier, you can expect your little one to complain. I start to get swatted and told “Mommy – bad!” when Miss Q’s legs start to feel the cinch. A wider, deeper seat could help alleviate this, which is really only going to be an issue with an older, taller child.

This is tough to rate because it really depends on your situation. I don’t normally give two ratings, but I make the rules, so here goes:

3.5/5 if you’re planning to buy this as your ONLY baby carrier – it’s not the most ideal option, but it’s still better than, say, the pikkolo carrier

4.5/5 if you’re planning to use this for day trips and vacations, but you’ve got another carrier at home to back you up for longer periods of wear with heavier babies when you’re not in transit