My original Casper mattress review features The Casper Mattress — what I originally thought was the best bed-in-a-box mattress. We have since passed that along to one very lucky 11-year-old boy (seriously, what kid gets a Casper king mattress in his room?!). Incidentally, The Casper makes a great platform bed! We had always used ours with the Casper foundation, but we found a cheap and cheerful platform bed for The K Man and — I can tell you after falling asleep putting him to bed many nights — it’s just as comfortable.

This Casper Hybrid review, however, comes after testing it out for nearly the full 100-night guarantee period. To be clear, this is also The Casper Mattress, but as a “hybrid,” it has both foam and coils (springs). 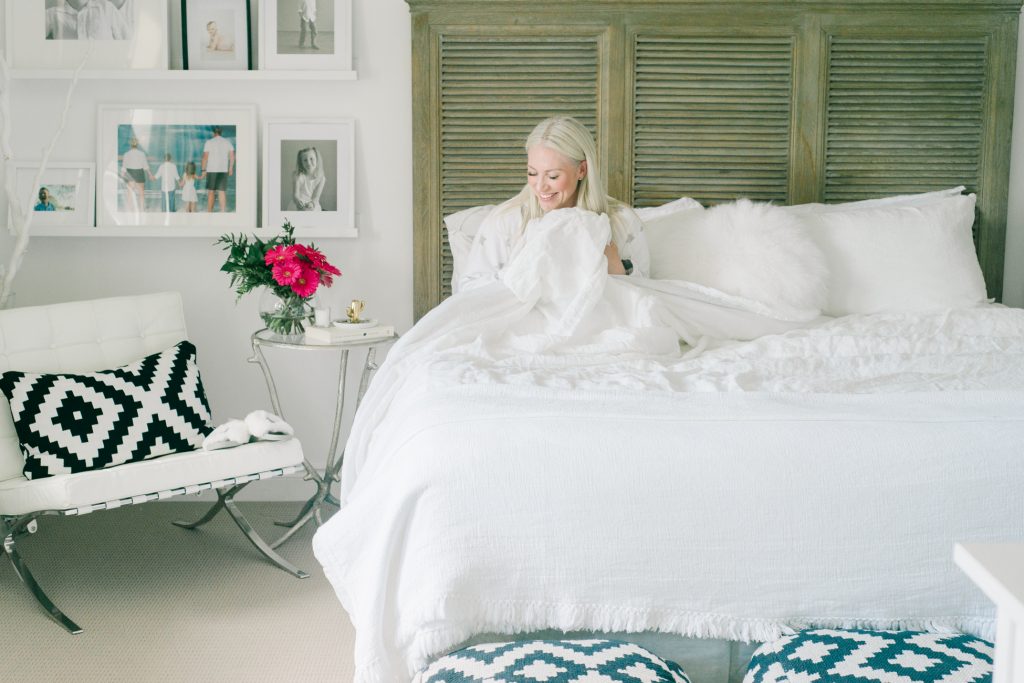 I thought it was only fair that I write my Casper Hybrid mattress review after spending nearly the entire trial period sleeping in one. (Photo credit: Kristen Recalis Photography)

We ordered a Casper king-size mattress in the Hybrid version to simply replace what we had. And while I knew the Casper Hybrid would fit seamlesssly over our Casper foundation and frame, once the mattress unfurled itself (it still comes wrapped tightly in a box, even with springs in it!), I wasn’t so sure how our Casper sheets would fit since it’s a thicker mattress. (Thankfully, our beloved Airy Linen sheets still fit perfectly. We also added The Humidity-Fighting Duvet to our bed and I feel like we’re in a cocoon of goodness each night.)

And that thicker mattress is one of the things I love most about our newest Casper mattress. It’s probably only an inch or so of extra height but I really do enjoy being propped up even more.

If our original Casper foam mattress was a win, the new Casper Hybrid is a win-win. See, with a 300-pound husband in bed next to me, we went through two or three traditional spring mattresses before someone suggested a TEMPURpedic (more on that below) memory foam mattress. It saved me from bouncing every time Big B shifted positions at night or got up to pee. And I never thought I’d want anything but memory foam again — until we tried the Hybrid.

Memory foam mattresses are prone to running hot. I certainly noticed a big improvement when we moved to The Casper, but I noticed an even bigger difference with the Casper Hybrid. The pocket coils throughout the mattress are apparently what moves the air around better, making it more temperature-regulating.

While we’re on the topic of those coils, Big B and I also agree that although they don’t add “spring” the way they would in a traditional mattress, they do add far more support overall. One of my only gripes about our first all-foam Casper mattress was that it lacked edge support. Not so with the Casper Hybrid! I can sit on the edge of my bed with one leg hanging over the side and my body stays aligned — no more flopping to one side and trying to stay even.

I truly didn’t even know what I was missing until I had what I wanted. Because, make no mistake, despite that one complaint, I was extremely happy with our original Casper bed.

Big B and I are both side/tummy sleepers, but I have occassionally forced myself to sleep on my back (to salvage fresh lash extensions for an upcoming photo shoot…because vanity), and I’m here to tell you that no matter which way I sleep on the Casper Hybrid, I feel perfectly aligned and fully supported.

That said, I did need to give it two nights before I fell in love with it. The first couple of nights, it felt too soft and I was having mattress regret. I think perhaps it hadn’t quite totally “undone” itself. Clearly, it took a bit of time to reach its full potential! So I’d urge you to just give it a good chance if it’s not the desired firmness you’re after at first.

One of my biggest fears was that having any coils in our mattress at all would take me back to the days where I’d get air if Big B moved around even a smidge. Most gratefully, the coils don’t impact the anti-movement of memory foam. They just make the memory foam upper better.

Since this is the only hybrid bed in which I’ve ever slept, my Casper Hybrid mattress review is certainly not coming from a place of expertise — only my personal experience with this one. I have read a couple of other reviews, though, and the consensus seems to be that this is the best mattress to buy if you’re looking for a hybrid construction.

Honestly, I can’t think of a single thing I don’t like about this mattress. And it’s unusual for me not to share at least one or two cons…but with the Casper Hybrid, I just don’t have any. 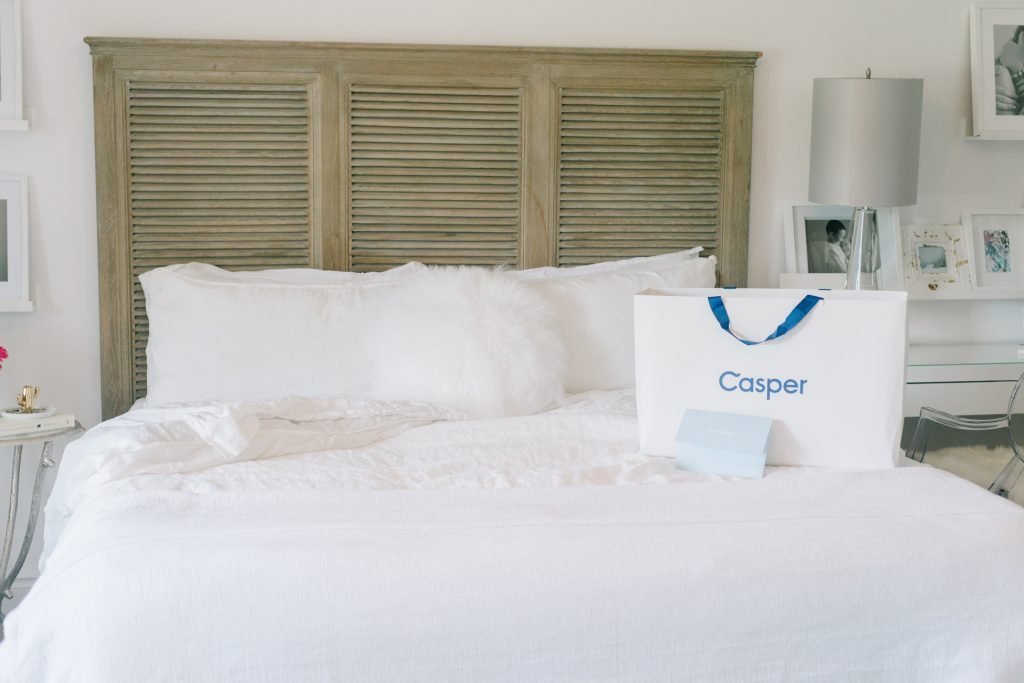 We haven’t covered the Casper pillows, sheets or duvet too much in this Casper Hybrid review, but I’m a big fan of all of them. (Photo credit: Kristen Recalis Photography)

Where to buy a Casper mattress

You can certainly still buy a Casper mattress the original way — online. But with so many brick-and-mortar stores opening up across the country, you also have the option to go try each of the different mattresses out in person and buy directly from a sales associate in-store.

Use the Casper store locator to see if there’s one near you.

How much is a Casper mattress?

If you’ve read this far and you’re feeling like The Casper Hybrid is for you, you’re probably wondering what the Casper mattress cost is like. A lot of the mattress-in-a-box reviews I’ve read send you on your merry way before breaking down the price of each bed size. Not this girl.

Here’s a full run-down of the Casper vs Casper Hybrid mattress prices:

Yes, the Hybrid costs more — but not so much more that I don’t think it’s worth the extra bump for the additional comfort and support:

I also strongly suggest adding the Casper mattress protector ($95-125 depending on the size of your mattress) to your order. It’s a drop in the bucket once you’ve spent a grand or so on your bed, and this thing is GOLD.

Without going into detail overload, let’s just say that this mattress protector is the only reason our Casper mattresses are both still white. The protector fits like a fitted sheet and washes and dries like a dream. The first time you put it on (if you haven’t put it in the washer or dryer first), you’ll notice it’s a bit big for your mattress — this is good. It will shrink a bit after the first few times in the dryer, but then it will be a perfect fit.

Interested in adding to the best sleep of your life? Then you’ll have to read my Casper pillow review to read why they’re worth the investment.

Most of the bed-in-a-box mattress companies have some kind of sleep guarantee. And when you’re getting a mattress by mail, you definitely want a lock-tight return policy! Let me tell you about Casper’s return policy:

Note that if you didn’t buy your mattress directly from Casper, the store itself may have its own return policy. Be sure to double-check. 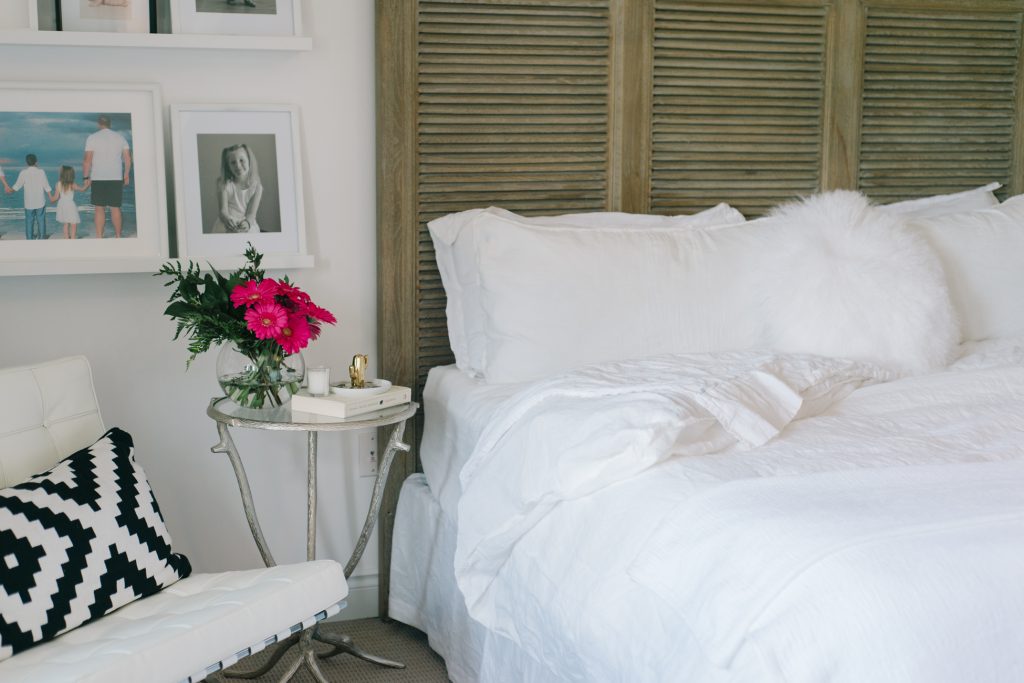 In the Casper vs TEMPURpedic debate, the biggest considerations are cost and temperature regulation. (Photo credit: Kristen Recalis Photography)

Like I said at the beginning, Big B and I slept on a TEMPURpedic mattress (on a platform bed) for many, many years. It was such an enormous improvement from the coiled mattresses we’d owned before that all of the things I complain about now were a blip on the radar at the time.

But since owning not one but two different Casper mattresses since our TEMPURpedic, there’s no question for me who wins in the Casper vs TEMPURpedic contest.

This is a huge one for me now as I’m smack in the middle of perimenopause, because hot flashes are no joke. We had our TEMPURpedic long before I knew the horrors of hot flashes — especially the ones that wake you from slumber — and I frequently found it got quite hot and I’d need to roll to a cooler spot.

I actually stopped using our TEMPURpedic pillows soon after buying them because I couldn’t stand the heat (and I’m that girl who always has cold hands and feet so heat is normally welcome in my world).

Our original Casper was a marked improvement, and the Casper Hybrid is even better.

I’ll admit it: TEMPURpedic has Casper beat here. If you like a very firm mattress, TEMPURpedic’s offering does include models that will work better for you. The edge support in particular is much firmer than the original Casper, but the Casper Hybrid would rival it.

But even the Casper Hybrid can’t match the across-the-board firmness you can find with TEMPURpedic.

Because of the TEMPURpedic’s firmness, some side and tummy sleepers may prefer TEMPURpedic. However, I sleep on my side or stomach probably 95 per cent of the night and I don’t find that my back or shoulders are negatively affected and my body feels well-supported.

I believe my body made less of an “indent” when I was on the TEMPURpedic, but that’s not indicative of better sleep or even better support in my experience.

And here’s where Casper really wins, because in many cases it’s half the price (or less) of TEMPURpedic. I know a lot of us believe that a higher price tag often means something is better (trust me, I fall prey to that notion frequently), but in this case, I assure you that the “you get what you pay for” phrase does not apply.

Now, there are no less than six categories of TEMPURpedic mattresses with an average of five different models in each category, so there may now be some more budget-friendly options in the mix than there were back in the early 2000s when we got ours. At the time, however, our king-sized TEMPURpedic was a whopping $3,200.

There is not one part of me that waffles on this: in no way, shape or form was that TEMPURpedic more than twice as good as our first Casper. NOPE. No chance. All things considered, I’d choose Casper again and again — even if the two brand’s prices were within mere dollars of each other.

There you have it — we’ve come to the end of my Casper Hybrid review. If you still have any questions, shoot ’em into the comments. Happy sleeping!

DISCLAIMER: Casper Canada provided me with the Casper Hybrid for review purposes. All opinions are my own.