Until about three months ago, we’d slept in a California king-sized bed for close to 14 years. When we decided to switch to a king, it was a dream to partner with the best bed-in-a-box company to write this Casper mattress review.

The brand had everything we needed — right down to the bed frame and new sheets — and between its 100-night trial and half a million happy customers who came before us, the risk seemed pretty minimal.

In the end, Casper became the catalyst for an entire master bedroom makeover. Click on that link to see what our room looked like pre- and post-Casper and find out how we created such a huge change for only a couple of thousand dollars.

My Casper mattress review absolutely must start with Casper’s delivery and set-up. We have a very small foyer for a suburban house, and when everything arrived and fit into it, I emailed my Casper contact in a panic because I was sure the foundation had not been delivered. I mean, a box spring big enough for a king is usually split into two twin-sized foundation pieces to ensure people can get them up a flight of stairs. There was nothing even close in size to a twin box spring.

After she assured me every component was delivered, I relaxed and we started bringing everything up to our room. It still didn’t seem like much, but — yes — it turns out we had a frame, foundation, mattress, two pillows, a mattress protector and sheet set in just a few small boxes. 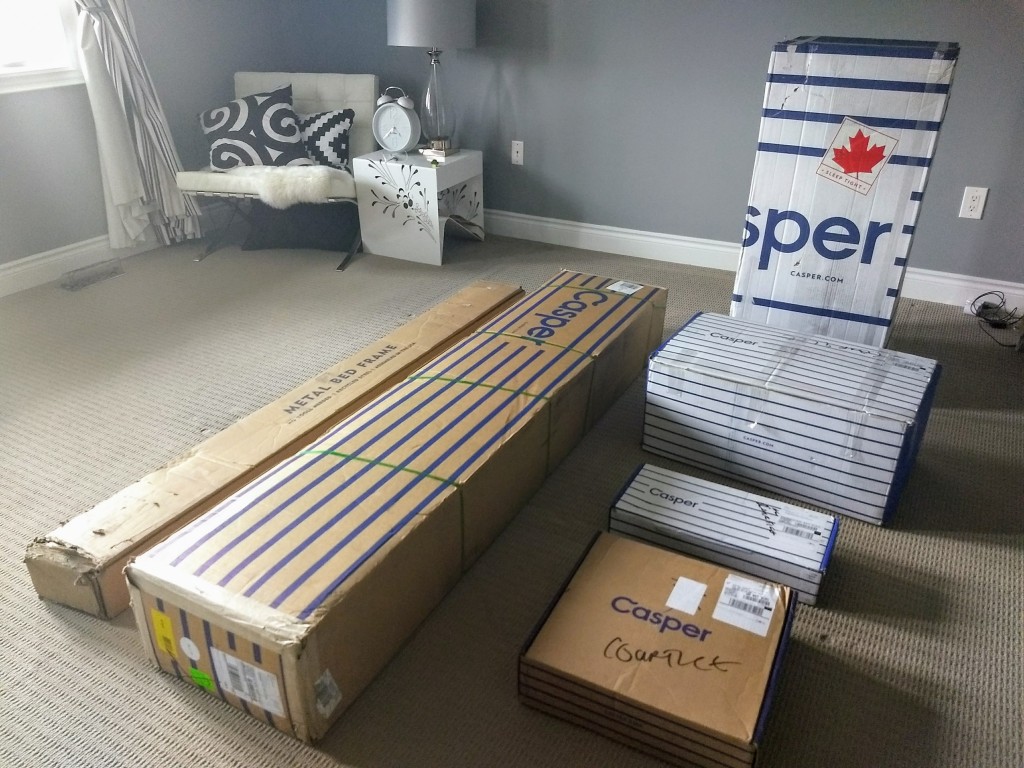 That’s everything I’m about to review as it arrived at my doorstep.

The videos on Casper’s website show set-up is a breeze. Well, of course the brand videos are going to make it look easy, right? So I did what any skeptical product reviewer would do: I set the timer on my smartphone before we got to work. We assembled both the frame and foundation, and unfurled the mattress from the iconic, compact Casper box, put on the mattress protector and sheets and put pillows into their pillow cases in — are you ready for this? — 27 minutes. 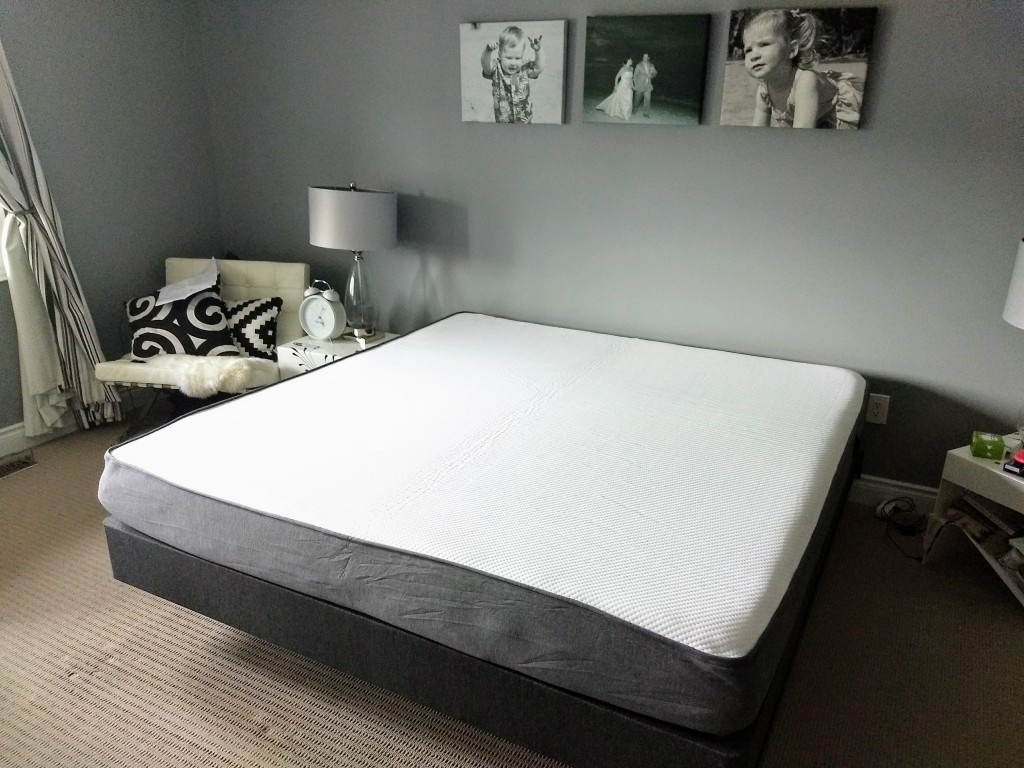 This is what a Casper mattress looks like after it has broken free of compression packaging and is placed on the bed frame and foundation.

From start to finish, it took less than half an hour to set up an entire king bed. And the instructions were so clear that Big B and I didn’t argue once through the process.

I’ll get to the extras like the sheets and pillows later, but first let’s focus on the mattress itself.

Aside from the ridiculously easy set-up, there was no weird off-gassing smell as the Casper mattress was unleashed and continued to rise into its full shape. Considering it’s not labelled organic or natural latex, this was a really pleasant surprise. (Less of a surprise once I read what’s not in a Casper mattress…see gaffes.) 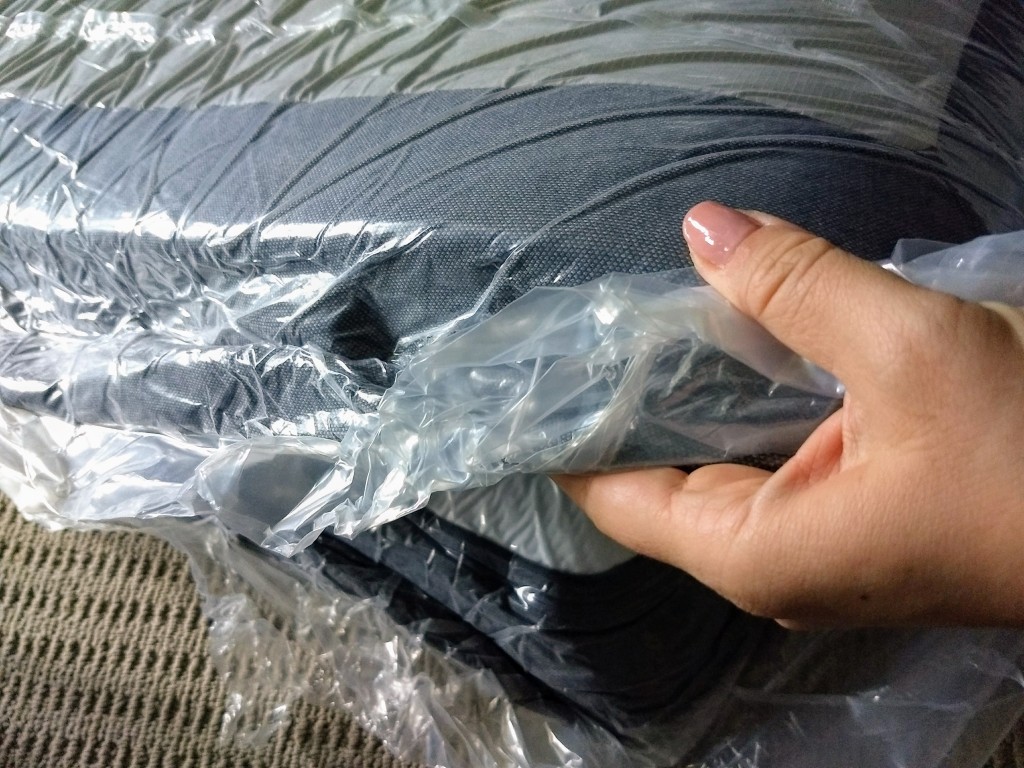 This is how compressed your Casper mattress is right out of the box — probably about two inches thick. And then — WHAMMO! — as soon as you open the bag, it expands and pops right into shape.

Having slept on a TEMPURpedic for almost 14 years, I was worried we would still find the Casper memory foam warm. The TEMPURpedic would warm up quickly once you were lying in it, and even for someone like me who is sometimes freakishly cold, I would at times find it too hot. Not so with the Casper mattress.

The company’s marketing will tell you that the “open-cell top layer uses convection and conduction to flow heat away from your body,” but as a consumer, all I can tell you is that maybe the foam is more breathable or that the top layer is simply better. Ultimately, the only thing that matters to me is that there are no hot spots.

I wondered if a $1,275 Casper mattress could compete comfort-wise with a pricey TEMPURpedic. The short answer is yes. In fact, my mom laid down on it a couple of weeks after it arrived and — having slept in our bed herself many times while watching our kids — immediately preferred it.

“It’s softer or something,” she said, unable to articulate it much more. And she’s right. The Casper still has that all-important body-molding memory foam feature that makes people choose memory foam in the first place. It’s still firm, and I still can’t feel my gargantuan husband toss and turn at night like I can atop anything other than memory foam… but it is, well, softer.

Speaking of price, even though it’s very good, not everyone has $1,275 kicking around. The good news is that Casper offers monthly payments with zero per cent interest. So you can get into your dream mattress and start sleeping better without LOSING sleep worrying about how you’re going to pay for it. #Winning.

Not only that, but a 100-night sleep guarantee would seal the deal for me. We’ve slept on it for 79 nights and I assure you — IT IS NOT GOING ANYWHERE. But for those who feel differently, Casper will pick it up and ship it back to HQ for free and then give you back your money. (If you think about it, a company would have to be awfully confident in its product to offer such a money-back guarantee.)

When you have a husband who weighs 300 pounds and you’re no dainty flower yourself, you want to make sure there’s a decent weight limit before you buy a mattress and redesign your entire bedroom around it! So I was relieved to read that Casper mattresses don’t have a weight limit and are designed for all shapes and sizes. We will likely need to rotate the mattress (NOT FLIP IT!) every six months or so to ensure both sides get slept on evenly, but that’s about it.

Should anything happen, though, I’m relieved that there’s a 10-year warranty.

Finally, Casper mattresses are made in the USA. Would I prefer they were made in Canada? Oh, sure. But we can’t have it all.

If my word isn’t enough, how about Consumer Reports? Or TIME magazine? They both give Casper a big thumbs up, too.

I don’t think it would have been fair to write a complete Casper mattress review without ensuring all of the components that supported our new mattress were also from Casper. The Casper bed frame is $150, and the Casper foundation is $350. Metal frames in my experience are usually around the $100 mark but we have never — and I mean NEVER — had one be assembled so quickly and easily. You don’t even need tools.

We’ve bought two box springs for our kids in the last couple of years and their double bed foundations were in excess of $400 apiece, so a king foundation at $350 is a really good price. And because of the way it goes together (watch the video), it can go up and down stairs like a dream and would also be super easy to pack up and move if that day ever comes.

Both are extremely supportive and sturdy, and I like that Casper went to the effort of creating a foundation piece that doesn’t need to be covered up. It’s a nice, grey fabric that you wouldn’t be embarrassed to have as part of your bedroom décor. 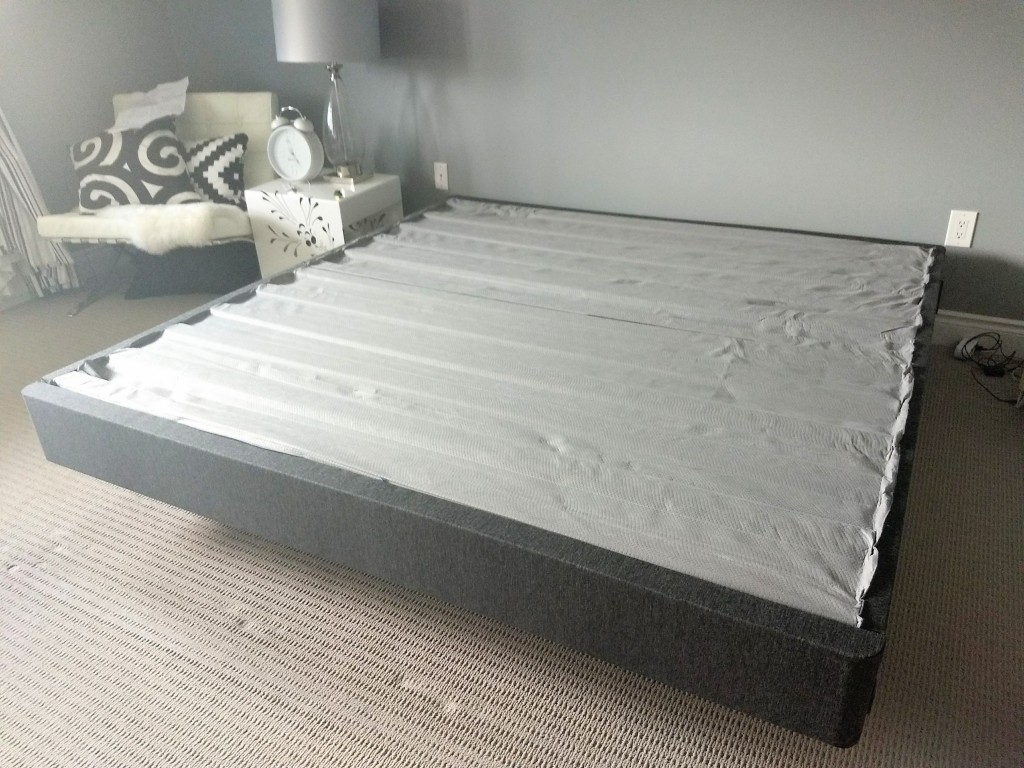 The Casper foundation piece goes together easily and supports the mattress, and us, beautifully.

I just wish the adjustable base had been available a few months ago!

This is a must for us because our kids still climb into bed occasionally and they’re young enough that we might still have a nighttime accident to contend with or even some vomit if they’re sick and don’t get out of bed in time. I won’t tell you which we’ve already put to the test, but suffice it to say that the Casper mattress protector really works.

I love these sheets! They’re crisp but comfortable. Casper’s sheets are made from California-grown premium extra-long staple Supima cotton, which doesn’t pill. Supima cotton represents less than one per cent of cotton grown in the world. It’s tops.

And we’ve found that these sheets continue to get softer wash after wash.

And the Casper sheets are, quite obviously, made in line with Casper’s overall aesthetic, so they go perfectly with your new mattress and pillows. 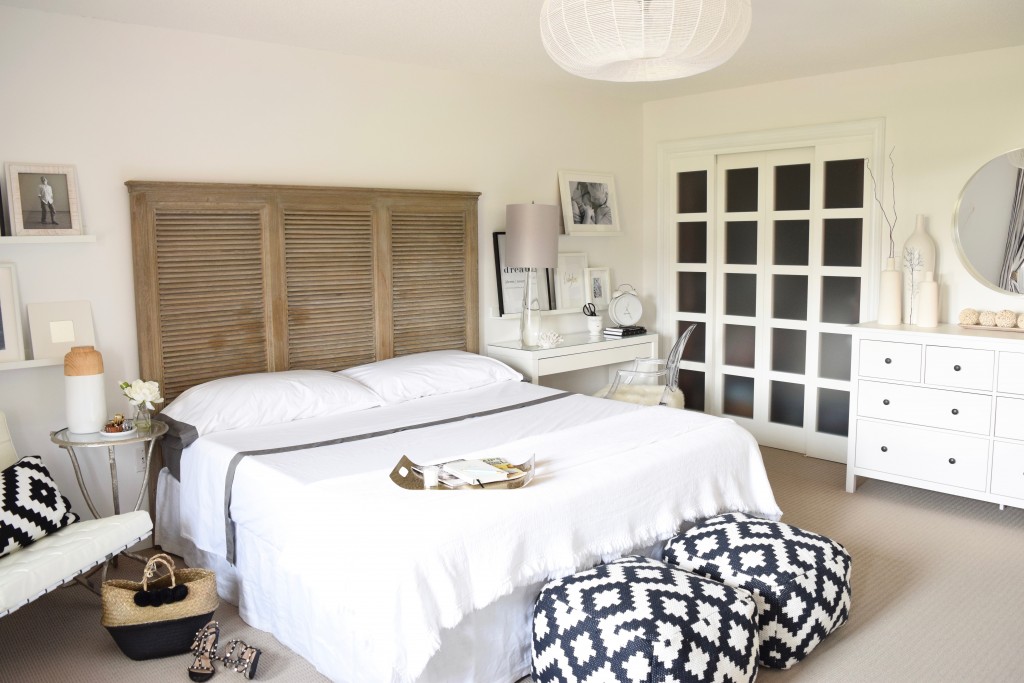 The Casper pillow has become such a favourite of mine after long-term use that I felt it deserved its very own post. Head over to my Casper pillow review for my thoughts and advice on what size to buy and why.

The only thing I can really say I preferred a tiny bit more with my TEMPURpedic mattress was the extra-strong edge support. I tend to sleep close to the edge of the bed, and also often sit up with one leg on the mattress and the other hanging off the side when I’m folding laundry. There is marginally less support on the edge of the Casper. Am I rolling off the side of the bed? Absolutely not. In fact, it’s barely enough to mention but it is something I noticed so I feel obligated to note it here.

It doesn’t claim to be organic in any way and Casper doesn’t offer an organic option. Big B and I have slept a combined 85 years in “regular” spring-loaded and memory foam mattresses, so at this point I feel pretty confident that we’re going to be just fine. But if you’re at all nervous, know that Casper’s foams are CertiPUR-US certified. That means they’re made without ozone-depleters, flame retardants, heavy metals (like mercury and lead) or formaldehyde. They’re also low-VOC.

In terms of the foundation, I wish there was a way to fasten the slats on the foundation to the base itself. You roll out the slats and they more or less stay where they’re supposed to, but as you move around on it night after night, the slats at the very top and bottom do sometimes need to be pulled or adjusted. Something as simple as Velcro would do the trick.

DISCLAIMER: As mentioned at the very beginning, I partnered with Casper on this review. The company provided me with the products so I could test them and give you my honest opinion about the set. As always, opinions are completely my own.

2018 Toyota Sequoia review
Ronald McDonald House: the reason I'm OK being a McMom
7 things I wish I could have expected when I was expecting (sponsored post)