I’m not really a cyclist. Actually, not even close. I was bike-free from about 1994 through 2009. But the minute I saw all those cool bike trailers for kids come out, I went out and scored a brand new, shiny red Schwinn cruiser on Craigslist. I loved the fact that if I was riding my bike and took a tumble (entirely likely), the kid(s) riding with me wouldn’t fall four feet to the ground with me.

I rode it once before it went into storage during our nomad phase, when we sold our Toronto semi and moved into a house-sitting situation while our suburban home was under construction.

In the meantime, however, I became fixated on Chariot Carriers‘ Corsaire XL. I laid down a heap of cash for that bad boy (along with some extras, like the jogging kit, storage cover, infant sling and EZhitch) because I knew it would be the only bike trailer on the market that would fit my on-the-tall-side kids for enough years to make it a worthwhile purchase.

The interior is very spacious. A colleague of mine who also has this model told me her two girls, ages three and six, both fit in there together. I’m not entirely convinced we’ll make it quite that long but my kids are really comfortable. Total weight limit is 100 pounds.

It feels sturdy without feeling heavy. For me, this is imperative. I want to know that the trailer’s built to last and can withstand a few bumps and turns without the agony of pulling what feels like an ox and cart. 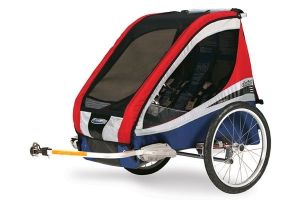 You can choose to ride with one or two kids. It’s all down to the five-point harnesses, which are super-easy to click in and out of place. You want to ride with both kids? Use both seatbelts – left and right. Just one? Re-click one harness into the middle of the trailer. It takes seconds to do this.

If you purchase the optional stroller kit (love it), you can keep the wheels on the trailer while you’re riding your bike. They flip up and lock into place while it’s attached to your bike and easily flip down once you reach your destination so you don’t have to try to (a) lock up a bike and a trailer, (b) wake a sleeping child or (c) unleash two toddlers only to have them wander around the grocery store like helmet-topped bobbleheads.

There’s a tonne of online video support if you need to know how to put together or use any of Chariot’s trailers, including the Corsaire XL. We used at least two videos along the way. Just look for the YouTube video library.

The suspension system is remarkably good, and it’s adjustable as the weight of your load changes. One kid and a bag? Two kids and two bags of groceries? No problem. Everyone gets a smooth ride, every time.

Because it’s so smooth and spacious, both of my kids will fall asleep during a stroll in the Corsaire XL. The K Man is not a motion sleeper and had not slept in the car or in a stroller from the time he was a few months old. The first time he went in the Chariot, when he was about three, he passed out. For two hours. I also remember at least two occasions last summer when I strolled him and Miss Q into our backyard and sat down with a magazine while they co-napped. Heaven.

It looks totally dorky, but I love the bright orange flag that comes with the Corsaire XL. It’s unmissable.

It only came with one rear red reflector, even though the manual shows two installed and there’s clearly a spot on the carrier itself to accommodate the extra reflector. I called the customer service line (which was efficient and excellent, by the way) and they assured me that the Corsaire XL only comes with one red reflector. Sorry, Chariot, but if customers are going to drop many hundreds of dollars on your product, you best be supplying me with two reflectors. Sheesh.

The storage space in the back is really only enough for a slim backpack and perhaps a medium-sized shopping bag. If you’re a city dweller, don’t expect to do a grocery run totalling any more than two large reusable bags and bring it all home in the Corsaire XL. It ain’t happening.

I don’t find it as easy to fold as this video demonstrates. As a result, it doesn’t moonlight as a double stroller that we take in the car with us. Though, to be fair, I probably just need more practice.

Oh, EZhitch – what a mind-bender you are. Because the plan is to eventually find a bike that doesn’t make Big B look like he’s riding a tricycle, we bought an extra EZhitch so we can easily detach the Corsaire XL from my bike and instantly attach it to Big B’s. As it turns out, my rear tire doesn’t use the EZhitch mechanism (required by quick-release wheels…I honestly don’t even know what these are…not a cyclist, remember?) in its entirety. But you have to buy the whole system. Chariot Carriers really needs to consider selling it piecemeal at a lower price point.

I HATE – yes, hate – the fact that there’s no side-window ventilation. When you’re trailing kids behind your bike, for safety’s sake, you have to close both the front bug net and the outer weather cover to which it’s attached. You don’t want a rock to careen out from under your tire and slice through the bug net (as thick as it is); that’s really gonna kill the mood of your ride. So, on an even moderately warm day, you’re going to notice the windows steam up because the trailer just isn’t breathable. Not good. This rules out using our bike trailer for several weeks of every hot summer.

I have to break down the pre-tax cost of the Chariot system – because it all comes down to price per use:

Make no mistake, this is a big investment. Unless you’re a serious cyclist who will use this several times a week or you plan to devote yourself to perfecting the fold and can use it in place of a double stroller, my bet is that you could get away with a far less expensive bike trailer system. However, the Chariot family of bike trailers will last a lifetime and retain their resale value really well if you decide to sell it down the road.

3.5/5 (though I’m sure a regular biker would rate it higher)

George's Cream - a cure-all, but at what cost?
MINECRAFT for Nintendo WiiU
"The keys to breastfeeding success": prenatal education with lactation counsellor Taya Griffin (gues...