If there’s one thing I seem to be addicted to, it’s tableware for kids. I have every conceivable brand of cup: some have spouts, some have straws, some have stoppers, some don’t have lids at all, some are insulated. I have so many spoons and forks that I separate them based on whether they’re stainless steel or plastic. Plates, bowls (some with suction cups), snack containers and bibs galore.

It’s all a bit out of control, really.

There’s certainly no reason that with only two children I should have an entire cupboard devoted to this stuff.

What does this mean for you? Rest assured that when I review cups and plates and cutlery for kids, I’ve got your back. I’ve been around the block (and took a detour to pick up more spoons along the way).

Dandelion sent me some Re-Play cups, spoons and forks – and they’ve become real favourites around here. 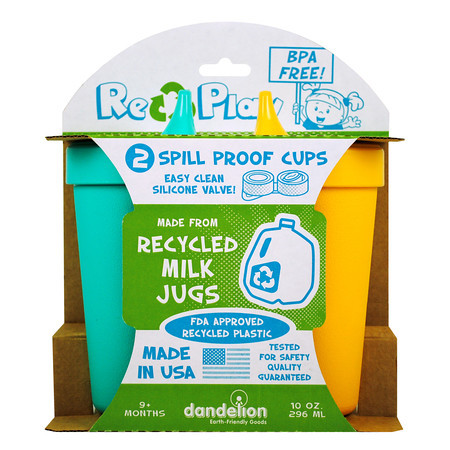 Dandelion really seems to get it. Sometimes, one hears of “eco-friendly” initiatives that ultimately don’t make much sense because of the energy use involved during the manufacturing and/or shipping process. The total distance Re-Play travels (from recycled material to finished product) is 940 miles, which might sound like a lot until you consider that many made-in-China goods travel more than 12,000 miles to reach North America. It also uses recycled paperboard for all of its Re-Play packaging. Smart.

So what makes the Re-Play line so interesting? Every cup, plate, bowl and utensil is made out of recycled milk jugs.

They’re also BPA-free, Phthalate-free, PVC-free and FDA-approved. You know, if you’re into that sort of thing.

The cups are nice and big – easily eight ounces. And their tapered design make it easy for both my two and four year olds to handle.

I don’t know if I’d call the overall look “retro,” but each piece does have a cool, old-school kind of aesthetic. Maybe it’s the saturated colours. Let’s just say that if you have one of those ultra-modern kitchens that’s brave enough to forego cupboard doors, you won’t be embarrassed with these on your shelves.

Every piece can go into the dishwasher (top rack and utensil cart have both worked fine for us). 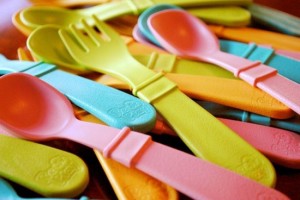 At about $4 per cup and 50 cents per utensil, the prices are completely reasonable. Some of the cups I’ve bought – like my nemesis, the Zo-li Bot Straw Sippy cup – have been $15 and not remotely earth-conscious. Nor functional.

Have you ever bought your kid a plastic fork that actually stabbed food effectively? Until I met the Dandelion Re-Play fork, I didn’t think such a thing existed. But without being a stainless steel weapon in the hands of my spirited two year old, the Re-Play fork is strong enough to jab through medium-rare steak but light enough that it doesn’t travel into another room in my open-concept main floor when whipped overhead by this same two year old.

If all of this isn’t enough, check this out: Dandelion works with Habilitation Center in Boca Raton, Florida – a non-profit manufacturing plant that employs adults with special needs. The company packages some of the Re-Play product line. Awesome, right?

Without the stoppers in them, the cups are actually pretty spill-resistant. And here’s why I know that…

I don’t know what kind of Fort Knox-style design went into the stoppers, but – ohmigod – I imagine I looked like a suckling pig trying to get the cup to “work.” When I noticed that Miss Q was getting frustrated with the Dandelion Re-Play cup the first time she used it, I assumed I’d put the stopper in the wrong way. It’s an easy mistake and I’ve done it before with other cups. So I turned it around, and tried to drink from it myself. No go. I turned it around again. Sucked. Nada. Went to turn it around again and noticed by the imprint on the stopper that I definitely had it in the right way. I put the lid back on and started sucking. Hard. A dribble emerged, and then a very slow stream followed. I suppose if you have a baby who’s new to cups and is used to a bottle with a very slow nipple, this might work out alright. If this doesn’t describe your sitch, ditch the stopper.