Lindsay Noronha is a working mom of (almost) three that lives just west of Toronto in Canada’s fastest-growing community: Milton. She has a giant passion for her kids, which is why she scans parenting blogs relentlessly, eavesdrops on other moms at Target and promises to one day actually read a parenting book from cover to cover. When not working as a mom and communications professional, Lindsay can be found watching PVR’d episodes of kid-friendly shows including Criminal Minds and The Following.

While preparing for the birth of our third child, my husband, Shaun, and I were thinking about all the things we would have to buy new for this baby.  We happily discovered that the list was quite short and included mainly big-ticket items like a bigger house and “cool” minivan — but at least the list was short.  One of the things that we knew we would have to invest in was a good baby monitor.

When our son was born four years ago, we bought what looked to be the best, because it was the biggest monitor on the market. Bigger is better, right? Wrong. The unit was heavy and bulky and certainly couldn’t be transferred from room to room easily.  When my son was three months old, we went to visit my girlfriend who just had her first baby a few weeks earlier.  We were sitting in her living room having tea when I spotted it: a small, full colour, fully portable monitor. It looked as shiny and sleek as a cell phone and seemed to work great. Why did she have one of these and I didn’t?

I would rectify this situation immediately.

I dragged Shaun and the baby out to the closest baby-gear store the next day to buy this fabulous new monitor. And it was fabulous. For a little while. We could see the baby well in the dark, it was full colour in the light and I loved being able to easily carry it from room to room. Alas, after about a year, it became possessed by the baby-gear demons. It would turn itself off, quizzically show that it had no juice after being plugged in all day and it constantly froze.

Because it was so untrustworthy, we dragged out our first mammoth monitor to use along with it. The sound on the big screen was terrible so we also lugged out a pair of audio monitors as well. Our house looked like the headquarters of a secret service sting operation. Not good.

When we were researching a supreme monitor for baby number three, we decided quickly that we wanted to use our phones as the monitor’s parent units so what we were really looking for was a camera that could transmit to our phones seamlessly and beautifully. Is that too much to ask? Because we wanted to have the right monitor in place before the birth of the baby, we decided to monitor our two-year-old daughter who we haven’t spied on in more than a year. This should be interesting. 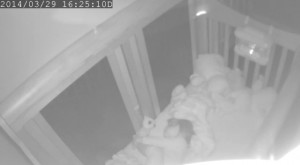 Watching some post-nap play thanks to night vision.

The picture quality is quite good. The night vision is a little grainy but I can see my daughter kicking the sides of her crib and throwing her cuddly friends overboard clearly, so I’m happy with it.

There are a few features that may be ideal for a newborn or a child who is used to being monitored that, although backfired for us the last go-round, I will definitely try out for baby No. 3. The ability for us to speak to her through the camera is a great example of this. I can see how this feature could be soothing to a newborn or expected by a toddler, but for my daughter it was terrifying. The first time we tried it, she sat up instantly, turned her head toward the camera and started crying. We went in her room and showed her with our iPhone what we were doing…but she wasn’t comforted. She wasn’t a fan. My son on the other hand loves this feature.  He asks for my iPhone as soon as he gets up in the morning so he can talk to his sister before we get her up. He also loves hearing his voice coming from the camera. At least one of them is happy.

I also like that we are able to play lullaby music remotely from the camera. Again, my daughter thought this was a form of medieval torture unless we played Twinkle Twinkle Little Star, then all was right with the world.

Shaun and I are definitely helicopter parents. We can count on one hand how many times we have been away from our children at the same time. Work is really the only thing that keeps us away from our kids, so being able to see at least one of them during nap time is blissful. Not only can you see the baby from the comfort of your desk chair (or Starbucks booth), but the two-way communication function also works. There is about a 10-second lag, which can be annoying, but the kids loved to hear daddy’s voice coming through the camera. My son would talk back while my daughter scoured the house looking for her dad.

The D-Link WiFi Baby Camera comes with the option of a pink or blue face plate, which is great if you care about that kind of thing.

I thought at first that the temperature feature was a waste of screen space until the night that our furnace stopped working. I didn’t realize that the furnace had broken down until I noticed that the temperature in her room was declining quickly. I went to check the house thermostat and realized what had happened. It was a very cold and frustrating night. 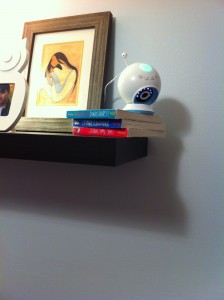 Trying to get a good angle…

You’ll have a hard time getting a good angle.  The camera is round so it tends to roll off the base when trying to get a good view. The camera does come with a wall-mounting unit but I don’t like mounting anything to our walls especially when we are getting ready to put our house on the market.  We put the camera on three books on a high shelf but her head was still cut off from our view every night. We could generally see from her mid-back and downwards.

The lag with the two-way communication is very annoying. Our bedroom is across the hall from our daughter’s room so we could hear our voices coming through the camera at least five seconds after we spoke. My son loved this lag. He would speak into the phone then run to her door to listen to what he said coming from the camera, but for us this was pretty irritating.

The set-up was very time-consuming. On paper, it looks straightforward and there really are only a few “simple” steps but it took us three times of starting the set-up process before we got it to work. A better FAQ with troubleshooting techniques would have been useful.