I’ve been passionate about babywearing for five years.

Ever since I slipped on my first stretchy wrap, I was smitten. The feeling of your baby snuggled up close to your body, being hands-free (especially once you have another child in tow), and being able to lull your little one to sleep while you’re running errands all contribute to the magic that is babywearing.

I’ve been able to review many types of baby carriers, and I even did a TV segment about a bunch of my favourite wraps, slings and soft-structured carriers (SSCs). And when the emeibaby carrier recently became available in Canada, I really wanted to give it a try because it’s like nothing I’ve ever used before – it’s a hybrid carrier that’s one part sling and one part SSC.

Thanks for sending me one to test out, emeibaby! 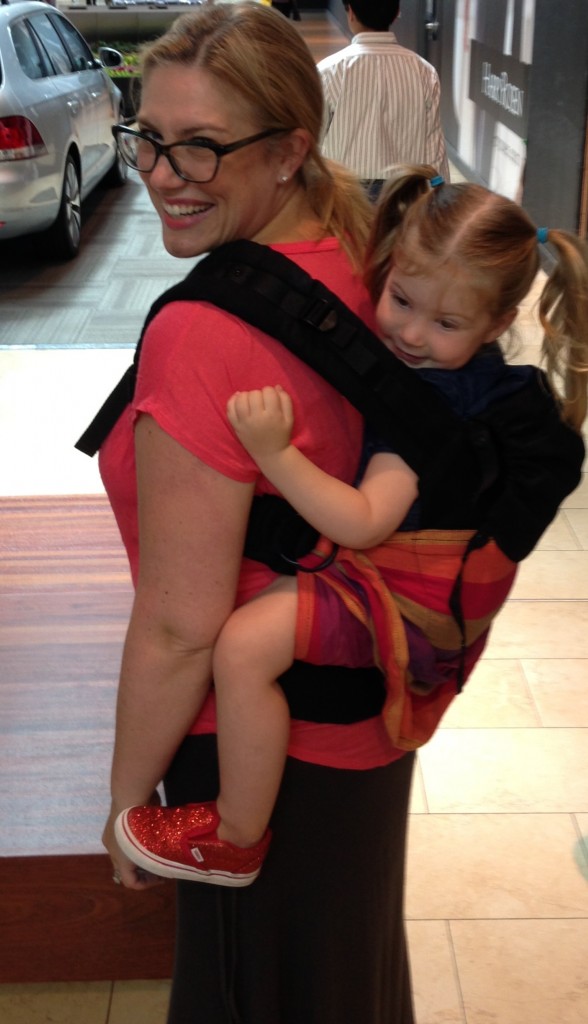 Overall, the emeibaby carrier does a good job of maintaining the optimal “M” position, with your child’s knees positioned higher than her bum.

Would you believe me if I told you that after my neighbour (who had a three-week-old baby at the time) borrowed the emeibaby for a weekend, she ordered one that same week? It’s the truth. And that says a lot about a product. Especially when she had the opportunity to try every sling, wrap and SSC I have lurking around my house.

It’s really easy to use, and if you had an infant and a toddler, converting it to accommodate both ages is a snap. It’s really nothing more than a string at the base that tightens the fabric for tinier legs and a smaller bum. The fabric then gets adjusted on either side via ring slings and you’re all set. If you’ve read that it’s complicated in the least, don’t believe it. My neighbour had never “worn” her first baby, and she barely needed any help from yours truly to get started. Until I film my own, you can watch any of these videos to help you get started with the emeibaby.

I like that you can carry even a tiny baby (from 6 lbs., 6 oz.) the same way you’d carry a toddler – tummy to tummy with Mommy – in that beautiful “M position” (the most ergonomically correct position for proper hip alignment and spinal development). In my opinion, actually, this is probably the best baby carrier for newborns that can go on to be used well into toddlerhood.

Even with newborns, you don’t need any kind of insert with the emeibaby. Even the carriers that can accommodate wee babes have some kind of inner structure to support them. Not the emeibaby – and that’s the beauty of this hybrid carrier. Tie it up and your little one has all the support she’ll need.

The fabric is basically a woven wrap, which – if you’ve ever seen them – are thin but strong, and this helps create that nice, rounded back you want to see when you’re carrying your baby. It also ensures that there isn’t so much support under your baby’s bottom that the M position isn’t achievable. 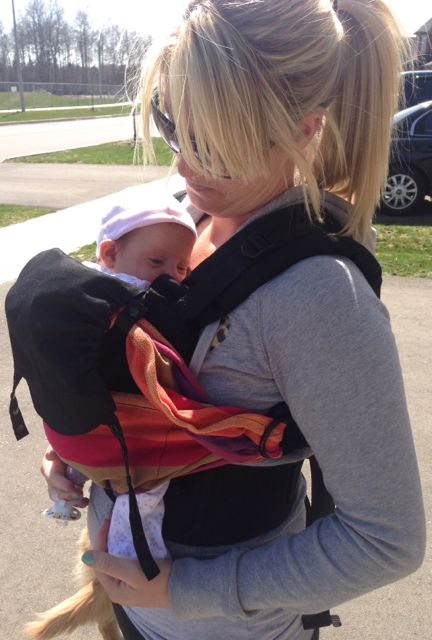 My neighbour puts her six-week-old princess in the emeibaby carrier with ease.

emeibaby has some great patterns available; very reminiscent of Navaho prints in some cases. Lots of girly and neutral options.

The shoulder pads don’t sit too wide on my shoulders and have the right amount of padding. I never feel like they’re going to fall off on either side, are pulling my shoulder blades apart or are encroaching on my jugular. That’s always nice.

Same goes for the hip band – it doesn’t dig into your, erm… crotchal region like some SSCs.

The buckles are all strong and feel really secure.

If you wanted to breastfeed your baby in the emeibaby, it operates the same as any SSC – just drop the shoulder strap a bit and off you go.

emeibaby carriers are from Austria. Maybe it’s because I’ve lived in Europe that I believe the quality of products coming from there are always such high quality; this is no exception.

The issue I’ve been having with my beloved Boba 3G lately is that Miss Q is just so darn long that her legs dangle out the sides of it – well beyond where they should optimally be. This is probably where the foot straps would come in handy, but she hated them every time I tried them and I really have no clue where in my   storage space they might be. There’s enough fabric on the emeibaby that I can pull it out right under her knee-pit (that’s what that’s called, right?).

Overall, the emeibaby carrier is just super-duper comfy and every baby or toddler who’s been in mine seems to love it.

When you’re trying to be all things to all babies, something’s gotta give. I get that. I do think, however, that the complaint I’m about to make can be fixed for emeibaby 2.0: the fabric that you have to tuck into the waistband when you’re carrying a toddler ultimately ends up back out of the waist band as your toddler’s heavy legs put pressure on it. So that perfect M position and fabric all the way up to the knees goes awry until you re-tuck, which gets annoying if you’re carrying your toddler for a good stretch.

The emeibaby carrier only goes up to 33 pounds. This is a full 12 pounds less than many of its SSC cousins, like the ergobaby or Manduca. It’s got to be that the woven fabric – one of the very features that makes this carrier so unique – just isn’t as strong as double-walled cotton or whatever the hell SSCs do to reinforce the carrier to accommodate a 45-pound child.

No real pockets to speak of – not ones that have any kind of secure closure to make carrying keys or money or a smartphone easy.

It’s not organic, and while there’s no organic option, the cotton used is – at least – certified by Oeko-Tex.

The price tag is on the high side – considering it’s not organic. At somewhere north of $170 (depending on where you buy it or where you live, tack on up to an extra $20) before taxes, this is premium priced in line with organic SSCs.

Gro-clock: get your morning ZZZs back
Playtex: The First Sipster Trainer Cup
Back-to-school must-haves for littles