I’ve been going to Niagara Falls for just about as long as I’ve been alive. And when you only live a couple of hours away, it’s a pretty blessed thing to be able to do so.

Because The Falls are truly breathtaking. You kind of forget when it’s in your backyard how impressive it is to have one of the Natural Wonders of the World so close.

Sometimes we pair our trip with cross-border shopping, and sometimes we don’t even make it out of our hotel.

We were invited to Falls Avenue Resort to check out the huge complex of hotels, restaurants and its famed waterpark — so we took along one of The K Man’s besties and turned this road trip into a seventh birthday celebration.

You don’t need a whopper of a budget to stay right in the Falls Avenue Resort complex. Although we stayed in the Sheraton on the Fall’s stunning two-floor suite on the 22nd floor, you could just as easily stay at the Crowne Plaza Fallsview, Skyline Inn or Clifton Victoria Inn at the Falls. There really are accommodations (inclusive of waterpark passes for the whole family) to suit just about every budget. And, let’s face it, how much time are you really spending in your room, anyway?

Three of the four hotels are connected by indoor passages, and they all lead to several restaurants (including gourmet sit-down, Canada’s last remaining Rainforest Cafe, as well as quick-serve spots like Pizza Hut and Subway). Better still? They all lead to the monstrous waterpark on the “UL” level of the complex. Oh, and Casino Niagara, too. 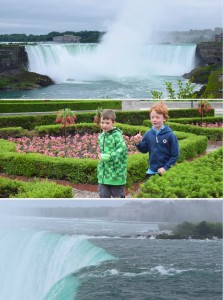 Check-in is pretty easy since you pull your vehicle right into the underground and have temporary parking beside the doors while you head to the front desk. It’s easier still if you choose valet ($39/night), but if you self-park ($25/night), you will need to go back out to move your vehicle. Thankfully, not far.

While I can’t write about the other three hotels, I can tell you that the Sheraton is exactly what you’d expect from a Sheraton: upscale, clean, central. In fact, it’s right at the foot of Clifton Hill and directly across the street from The Falls themselves, making it easy to get around without having to use your vehicle again. This is probably the biggest reason we would choose Falls Avenue Resort over Great Wolf Lodge in the future — being able to leave the hotel and onsite restaurants to explore. At GWL, you’re about 15 minutes from anything noteworthy so you’re kind of stuck there.

Our room was pretty spectacular, and the kids were ecstatic when they saw our view from the 22nd floor — spanning from the Rainbow Bridge over to both the American and Canadian (horseshoe) Falls and even as far as the Skylon Tower. Panoramic in every sense of the word. We had two floors, each with a fireplace, and if you’re a bigger family (I’m talking four or more kids), you’d be able to fit into this room with ease with the addition of a few rollaway beds. There’s a king bed on the upper level with room for at least one rollaway and the lower level has a queen-sized pullout couch and could fit another two rollaways. This room is not lacking in space! And the view really is something to write home about.

The waterpark — all three acres of it — has been voted the No. 1 waterpark in Canada by TripAdvisor for two consecutive years. We’re talking 16 waterslides (some of which are six-storeys high!), a 3,785-litre tipping bucket, wave pool and even an outdoor component with loungers and in-pool basketball nets. If you’ve got kids in the four to 10 age range, this is the waterpark for you. There are so many small and mid-sized waterslides they can explore and on which they’ll feel safe but adventurous. Although our kids both love Great Wolf Lodge, the waterslides there cater to toddlers or tweens, teens and up — there aren’t a lot of options for little kids who are on their way to being big kids. But Falls Avenue Resort’s waterpark makes it easy for babies who aren’t even walking yet to enjoy teensy slides, while there are slides topping out at three different heights on the “pirate ship” structure. And for those who have a bit more need for speed, there are some really great higher-speed waterslides (though nothing like those that can be found at Calypso in Ottawa). 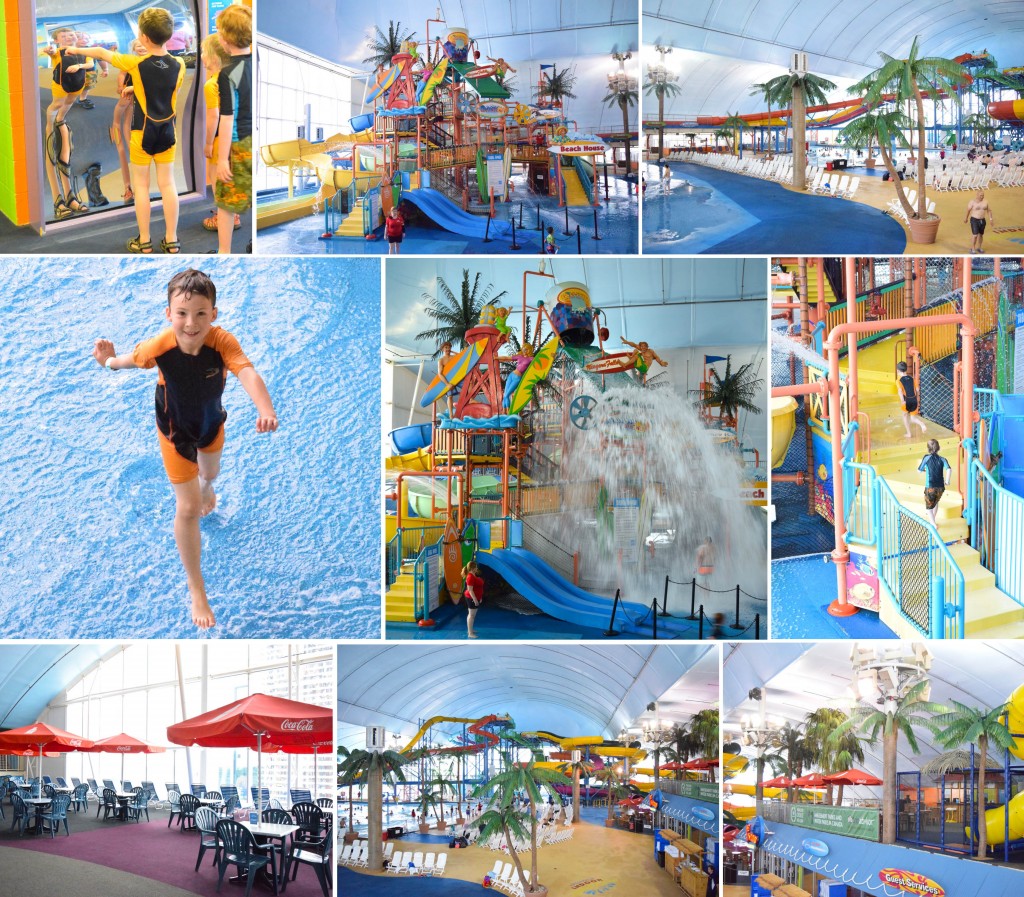 You don’t even need to leave the waterpark to eat. There’s an onsite restaurant and heaps of areas to pop a squat. Plus, the whole place feels very safe. I’m a bit of a helicopter parent and I had no qualms letting The K Man and his friend (both newly seven years old) explore much of the waterpark on their own. Especially considering there’s a lifeguard every few feet!

If you’ve never been to a Rainforest Cafe, you might want to make the trip to Falls Avenue Resort just for the experience. Because everyone should do it at least once. Don’t expect gourmet dining, but the drinks are big and if you get a Volcano for dessert it’ll feed your whole table and it comes with built-in entertainment by way of sparklers.

Should you be staying overnight at any of the hotels, I would encourage you to head to the Fallsview Grand Buffet in the Sheraton for its buffet breakfast, which was really good. There was so much variety that all three kids we had with us were satisfied and stuffed to the brim — ready to play the day away; in fact, no one even asked for a snack or lunch until after 1 p.m.! Plus, you get to eat overlooking Niagara Falls. Bonus. 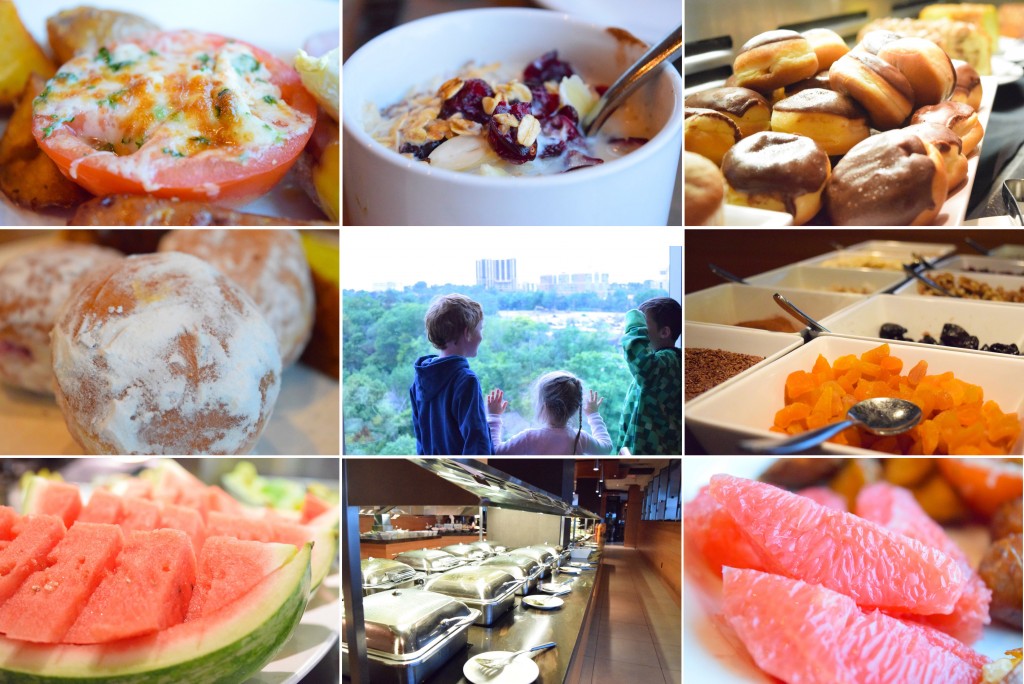 Overall — for the location, price and amenities — the Falls Avenue Resort is excellent bang for your buck and if you were careful about where you ate, you could probably do a two-day stay for a family of four for less than $250 at the lower end. Considering it’s $100 to take a family to the movies these days (if you’re eating a bit more than popcorn, which we often do), $250 for two whole days is bargain-priced entertainment.

Even if you’re staying in the resort complex, it’s still a trek to get to the waterpark. You might feel like you’re in the movie Labyrinth.

The lockers outside of the waterpark — although conveniently located — are small. Even the “large” size (at $10 per day) was barely big enough to hold our essentials (two adults, three kids).

No lazy river. We all agreed, however, that a lazy river was literally the ONLY thing Great Wolf Lodge has that’s missing at the Falls Avenue Resort.

I probably wouldn’t choose the two-floor suite again, but go for adjoining rooms instead. The noise travelled up and down the stairwell really easily (as did the light), which made it hard to do much until the kids were totally asleep. We enjoy suites because we want to be able to watch TV or share a bottle of wine once we’ve put the kids down.

Hot Wheels Track Builder
What to wear for summer in Barcelona
Give unto others: charitable gifting