This was a difficult review to write. Which is why it’s been nearly three weeks since my last post. I had to let all of my thoughts settle so that I could be as objective as possible.

So here it goes.

As you may remember from my recent post about a family weekend in Mont Tremblant, we’ve been trying to embrace winter this year. And as part of that effort, we were delighted to accept an offer to spend our New Year’s weekend at Fern Resort.

We packed up our winter gear, some nicer duds for the New Year’s Eve party and made the easy two-hour drive to Orillia for what was supposed to be a three-night, four-day stay. 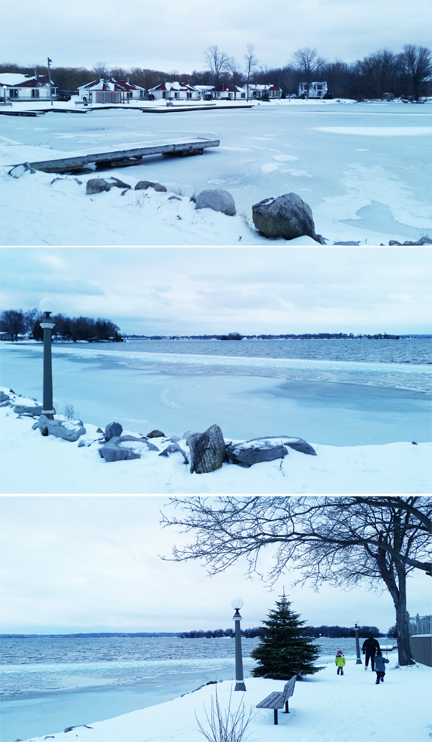 The Fern Resort grounds, currently dusted in snow, rest alongside Lake Couchiching and are beautiful. Taking a walk down near the lakeside cottages is reminiscent of a winter scene from a Trisha Romance painting.

The New Year’s Eve party for families was fantastic. Although dinner service was on the slower side, there were five courses of mostly delicious food for the grownups and a buffet set up for the kids that earned two thumbs up from both of my wee ones. Miss Q went to the kids’ club while we finished dinner and had a great time drawing and playing with the dozens of other kids who were there. Dinner was followed by a dance featuring top 40 hits and an early countdown with a balloon drop. We had an awesome time dancing together and this is the major highlight of our time at Fern Resort.

Miss Q went to the kids’ club three times and enjoyed herself on each occasion. For the under-sixes, you have to sign them in and sign them out of the club, which is a good thing. The seven-year-olds and over are welcome to come and go as they please with their groups.

Overall, kids appeared to be having a great time with their groups — doing everything from playing board games to snowshoeing and cross-country skiing.

There are four video game stations with some really good games on them in the main lounge. This was a nice break from winter or group activities.

Ping pong, table-top shuffleboard, rollicking rounds of BINGO, nature hikes, ski and snowshoe rentals — there really are a lot of activities to try at Fern Resort. And if you have children in multiple age groups, you can rest assured that there’s something to keep everyone occupied. 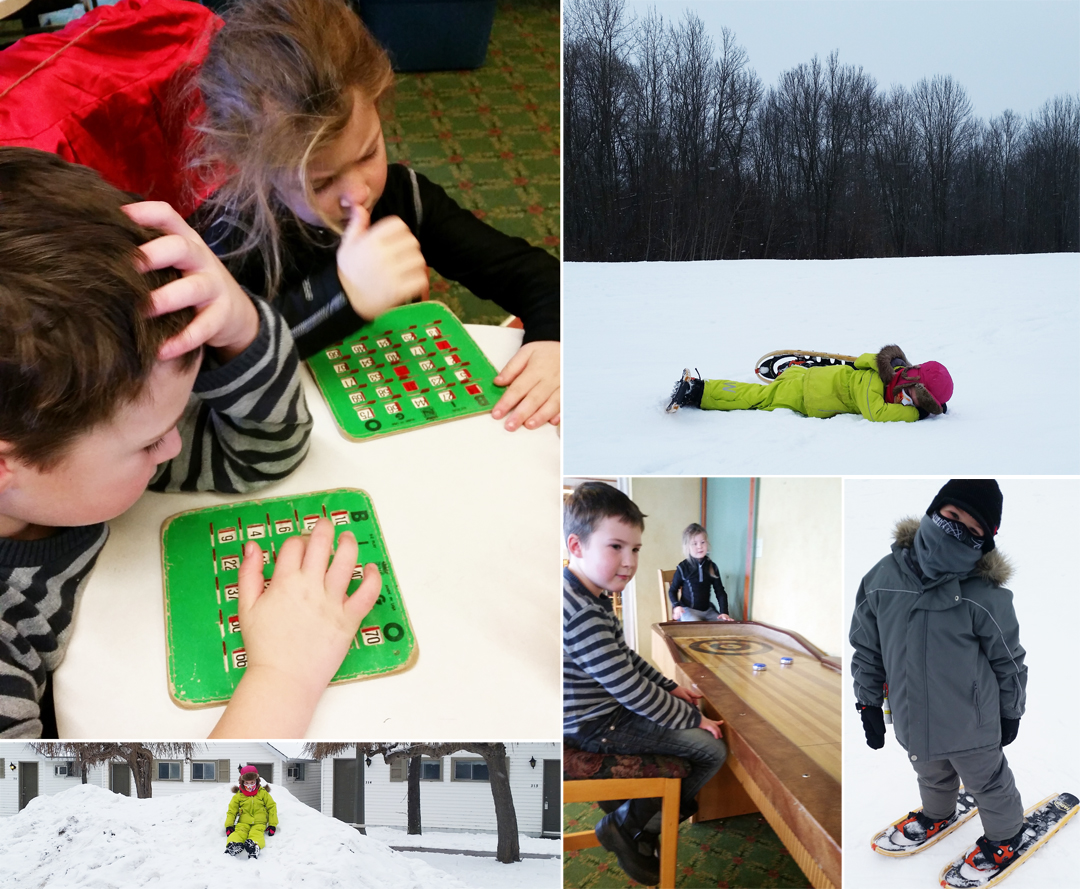 Entertainment was, on the whole, quite good. We were there for a one-man-band who played hits from the last three or four decades using up to 17 instruments (by himself!) as well as a circus act featuring a family of performers. More on that in the gaffes. 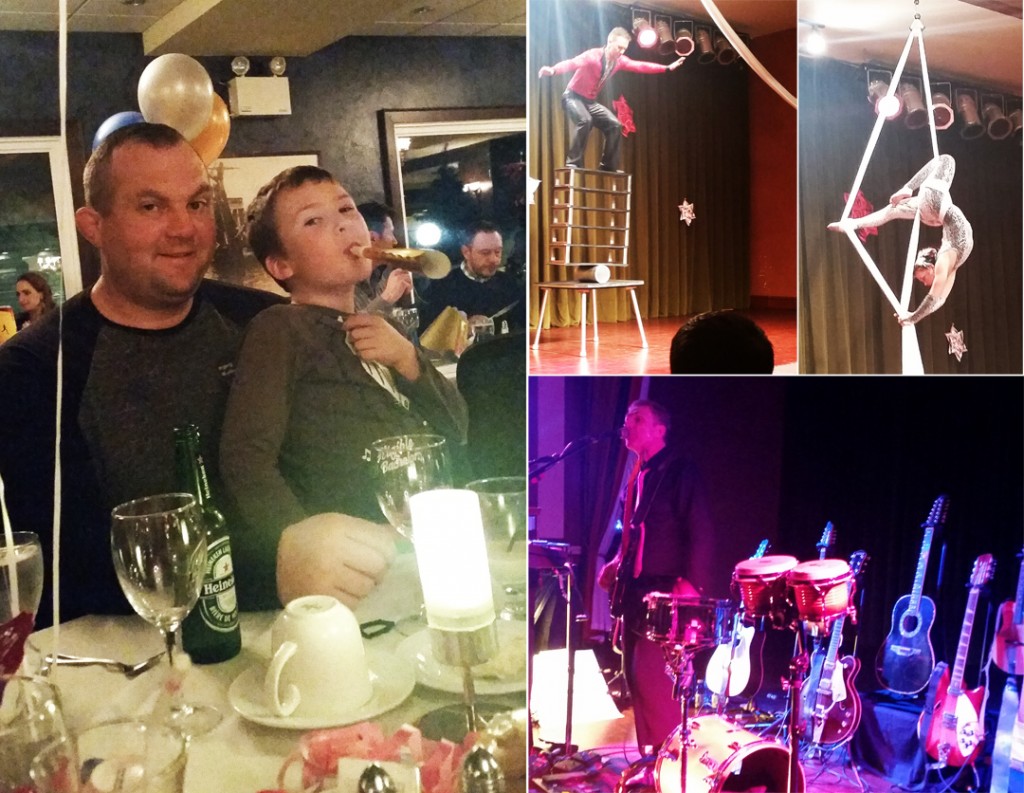 The cost of your stay is almost all-inclusive. That is, it includes your accommodations and all meals and non-alcoholic beverages. I really can’t say I’ve heard of another Ontario resort that does this.

There isn’t a single king-sized bed in the joint. And with a husband who towers at 6’6″ and nearly 300 lbs., we don’t fit in anything smaller. I made this abundantly clear to the general manager who booked our stay and while he did tell me ahead of time that there would be no king bed, he did say we’d have at least one queen bed as well as a pull-out sofa for the kids. I figured I could suck it up for three nights. But imagine my shock when we arrived and found two double beds and a single-sized pull-out sofa in our room! This meant that only one kid could fit on the pull-out, one parent slept in one of the doubles alone and the other parent slept in the other double with a kid. It was so incredibly unsuitable. There was also nowhere to separate ourselves from the kids at all, which meant it was lights out for all of us at the same time. This is remedied with a stay in one of the cottages where there’s a separate living space — but still no king bed if you’re a larger/taller couple who actually want to sleep in the same bed.

Decor and finishes are tired and dated. It’s at best a three-star property.

Housekeeping didn’t change our bedsheets, when it was clear that at least one set needed to be changed.

Food service was exceptionally slow, unless you wanted to eat from the buffet (which consisted of the usual suspects like chicken fingers and fries). With the exception of New Year’s Eve, which I can forgive because of the sheer volume of people who were sitting to eat at the same time, lunches and dinners were painful. I’m talking two hours to have four courses served. It got to the point where we allowed our kids to play on our phones going into hour number two so we could finish eating (and I generally don’t allow electronics during meals). One course was a basic salad, which took 30 minutes to procure during a particularly bare lunch seating. 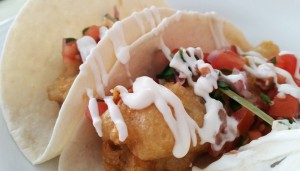 One of the most appealing dishes at Fern Resort — fish tacos — were good, but not great.

The service would have been easier to handle if the food quality had been consistent. It wasn’t. Some dishes were good while others were barely edible. I’d have high hopes based on presentation, and then one bite sent me into foodie despair.

The balloon drop during the New Year’s Eve party, while a really great idea, left my son in tears because there weren’t enough balloons for every child. I did see one child heading out with a balloon in each arm but my son was not the only upset child so the math means there weren’t enough balloons for each kid to get one. The resort knows well in advance how many kids will be there so this would be an easy fix for next year.

Wine was expensive with a 5-oz. glass of J. Lohr ringing in at $11 or $12 a glass. This is what The Keg would charge. But because you’re isolated, if you want that glass of J. Lohr, you have no choice but to suck it up.

Really cool activities like watercolour lessons were an additional charge ($30 per person). Dogsledding — a longtime bucket list item of mine — was one of these extra activities but I bit the bullet and signed all four of us up for the experience at my personal expense. It was around $160 for all four of us if I remember correctly. I thought this seemed like a fair price, until I blinked and it was over. The entire experience was only 20 minutes long and I only got to drive my own sled of dogs for half of that time. Was it a really amazing 10 minutes? Absolutely. Did my kids love it? They sure did. Was I able to snap an awesome Instagram pic? Uh-huh…check it out below! But at the equivalent of $480 per hour, it was a huge rip-off.

MUSH!!! I did it — I drove a #dogsled! Only for 10 minutes, so I can’t wait to do it again at @monttremblant later this month. But what a #fun 10 minutes it was… #FernResort #Orillia #FamilyTravelCA #travelblogger #tourism #DiscoverOntario #familytime #familytravel #resort #wintertravel #winterfun #dogsledding #dogsofinstagram #mush #bucketlist

Although no fault of Fern Resort’s, some of the parenting we and our children witnessed during our stay was deplorable. Easily the worst we’ve ever seen on any vacation. One example was a mother who was furiously tying her 10- or 11-year-old daughter’s boot laces while loudly huffing, cursing F-bombs at her and finally erupting in a “You ruin EVERY f—ing vacation!” It was disgusting. And it wasn’t an isolated incident of questionable parenting that made you go Hmmmm…

Although the circus act was good, there was a moment when a child was heckling the father of the performance troupe who acted as the master of ceremonies for the evening. Now, don’t get me wrong — the parent of this child should have shut him the hell up (hello, parenting problems), but when he was clearly disgruntled at the child’s comments, this grown-ass performer actually told the kid to “shut up.” It’s possible that he was trying to make a joke out of the situation (and many people in the audience laughed), but with a thick Eastern European or Russian accent, it didn’t sound funny. “Shut up” is also a naughty word in our house, so my kids in particular were pretty taken aback and looked to Big B and me for our reactions. Not cool.

With a per-night cost of between $400-600 for families of four or five, if the accommodations were more modern and well-appointed and the food was spot on, this would be a reasonable price. For the cost of three nights, your family could go to Cuba for nearly a week.

In the end, we checked out a full day-and-a-half early. I think that pretty much sums it up.