When I think about toy brands that have been part of my life since my own childhood, Fisher-Price is at the top of the list.

Two of my old toys have stood the test of time and both are from Fisher-Price: the barn and the train. My parents kept all of our Little People — at least the ones that didn’t get flushed or beheaded — and everything often gets pulled out when my kids visit their grandparents. 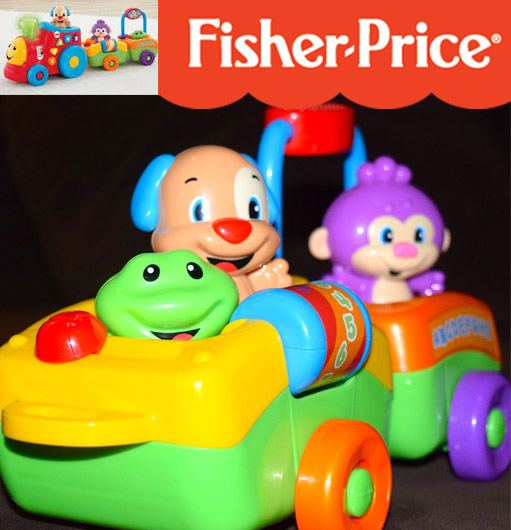 Pictured at top is the full Laugh & Learn Puppy’s Smart Stages train in all its glory. Front and centre, however, are the three characters with whom my kids have fallen in love.

Although the barn, remarkably, hasn’t changed very much over the years, the Fisher-Price train of yesteryear has certainly evolved. Along with several companion Smart Stages toys that were introduced about a month ago in Canada, the Laugh & Learn Puppy’s Smart Stages Train is one we’ve been playing with a lot.

I admit, however, that I wasn’t sure how much my own kids would play with a toy that’s intended for six- to thirty-six-month olds. I totally thought I was going to need to borrow a toddler. But, wow. Even after more than four weeks, they’re both still very much interested in it. That’s saying a lot for 3.5 and six year olds who have more toys than any child really should.

I keep asking them what they find so appealing about it and one kept telling me, “Mommy, it’s just so FUN! There’s so much to do!”

And there really is.

My other kidlet, on the other hand, likes that the train comes apart and there are animal characters that provide a different kind of play.

That’s the beauty of these Smart Stages toys; they grow with your child. Each one is equipped with a switch that allows parents to be in control of each stage. Stage 1 is the most basic for babies in their earliest stages of development, but by the time you reach Stage 3, there’s a lot more sophistication. There’s a mix of songs and problem solving built into each toy. But the Smart Stages train has the distinct bonus of actually moving; my kids seem to like that part best, and they’ll make themselves into bridges to allow the train to choo-choo between their legs. I can picture them using this during the crawling stage; they would have loved trying to keep up with the train as it chugged away from them.

You’ll need a bit of extra storage space for the Laugh & Learn Puppy’s Smart Stages Train, as well as a couple of batteries, but, great news: we haven’t had to replace them yet despite pretty heavy use.

If you’re the kind of parent who eschews technology in the home, I get it. I really do. I love the “bubbles” we’ve created for our kids, too. But technology isn’t going anywhere, and at least the technology from Fisher-Price is safe and developmentally appropriate. And just for kicks one day, I removed the batteries altogether. And you know what? My kids still played with the Laugh & Learn train.

So grab an engineer’s cap and let off some steam, conductor! Fisher-Price’s Smart Stages are literally chock-full of bells and whistles, and come with the promise of appealing to your little one for more than just a few months.

Hint: watch for this toy in my annual holiday gift guide. Yes…it’s that fun.

DISCLOSURE: I was compensated for this post; however, you can’t buy your way into my gift guide — toys have to earn that kind of approval. And this one sure did.