Have you ever bought bulk packages of meat or fish, taken them home and tried to divide them up to put some in the fridge and the rest in the freezer?

We used to do it a lot, but stopped when we found that freezer burn wreaked havoc on the food we tried to deep freeze and use months later. It meant that we spent a bit more upfront but we weren’t throwing out hundreds of dollars worth of steak, chicken and salmon in the course of a single year.

Same went for banana bread, which I hate making unless I do it in large batches. But it just never lasted well in our freezer, despite being double-bagged. I would even go so far as to try to suck out all of the excess air from those “locking” bags (I think you know the ones…). Picture that. Just for a moment. A grown woman standing over a plastic bag sucking the life out of one of its corners. I always felt like I was taking my life into my hands when I’d attempt this feat with something like raw chicken, when I’d see out of the corner of my eye some rogue chicken juice creeping up toward my mouth. 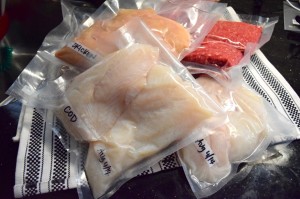 This was my first (and still favourite) use of the FoodSaver system. We like to buy meat and fish in bulk and freeze at least half into a couple of different servings.

That used to be me, so I was kind of thrilled when a FoodSaver system arrived at my doorstep a couple of months ago.

FoodSaver is really easy to use. I read the instructions once, and barring some slight confusion about how to insert the extra roll of plastic when you want to make your own size, I didn’t encounter anything that prevented me from sucking out air like a pro.

As I mentioned, we’ve been using this thing for a couple of months; I thought it was important to see what food that had been sealed using the FoodSaver machine would be like if we left it in the freezer as long as we normally would. I’m pleased to report that we didn’t experience any freezer burn on meat or fish, and banana bread thawed like a dream. The banana bread pictured below was sealed at the beginning of August and I thawed and opened it yesterday; it was as fresh and moist as the day I sealed it. So it works. And it works well.

I find vacuum sealing food rather fun. I can’t articulate why, but watching the air get pulled out of the bag is somehow very satisfying. 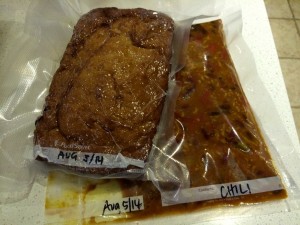 The FoodSaver 2-in-1 works really well with baked goods, like banana bread and doughnuts, as well as “wet” foods like chilli, applesauce or soup.

I love the option to use and reuse the Ziploc-style baggies thanks to the handheld wand that’s built into the FoodSaver system. This is what gives it that 2-in-1 claim. And we’ve gotten a lot of use out of these bags; plus, it appeals to my desire to be greener whenever possible. And though I recognize that plastic is terrible, unfortunately, it’s a necessary evil when you want to preserve things in the freezer.

At about $230 for the Food Saver 2-in-1 Vacuum Sealing System, I think it’s reasonable value. I easily tossed away $230 worth of meat and fish last year alone. I’m expecting this to fully pay for itself inside of one year. (Of course, you still have to buy replacement bags and rolls…)

I like that the machine gives me the option to select “wet” or “dry” foods; this straightforward instruction means that food like chilli doesn’t get sucked up into the FoodSaver as it’s vacuuming out the air.

It’s a nice-looking enough unit, but…

It takes up a lot of real estate on my countertop. People with small or galley kitchens probably won’t like FoodSaver’s footprint (at least the model I have). It’s really a bit bulky to go into a cupboard, so unless you have a walk-in pantry like I do, finding a home for it might be tough.

You end up using A LOT of plastic because the machine requires a four-inch clearance on either side of the vacuum-sealed “line” to work properly.

The electrical cord is not long enough…an extra foot would be really helpful.

Not all wet foods seem to get fully sucked of air. The chilli up there on the left, for example. That said, I can’t say it’s made a difference in terms of how well it’s kept food in the freezer.

Sometimes, the machine appears to be finishing the job and then just…stalls. I turn it off, and start over again and that seems to do the trick, but it’s weird. And freaky because the noise it emits while it’s stalled isn’t pretty.

3.5/5 (if refills were less expensive, the overall system would have earned a higher rating)