Managing your own diabetes is one thing, but I can’t imagine the stress of being a parent trying to manage your child’s diabetes diagnosis throughout the years. I just learned about the FreeStyle Libre system (it works with an iPhone app[i], people!) and the first thing I thought was “I have to tell parents of young adults about this.” Because I feel like it could be life-changing for those living with diabetes (18+)– and I don’t use that phrase lightly here.

During show and tell in grade school, one of my classmates demonstrated how he had to prick his finger to test his blood sugar. We were maybe 10 or 11 years old, watching this kid draw his own little pool of blood.

He explained that he had diabetes and had to do this blood-inducing ritual several times a day. This came on the heels of a seizure he’d had in class a week earlier, which the entire class witnessed in a strange state of both awe and horror.

This, thankfully, has been my only brush with diabetes.

Did you know that Diabetes Canada reports that 11 million Canadians are currently living with diabetes or prediabetes?[ii] Those numbers grow every day, and many don’t even know they have it. (Symptoms like increased urination, hunger and thirst, and sometimes unexplained weight loss, may point to diabetes and should be addressed with your primarily health-care provider.)

At its root, diabetes is a metabolic condition in which a person’s blood sugar (a.k.a. glucose) levels are too high. Whether someone has Type 1 or Type 2 diabetes, managing those glucose levels — which, in part, is about healthy lifestyle choices — is critical.

When I think about my kids getting older and heading off to college or university, I wonder how much more worried I’d be knowing they need to remember to check their own glucose levels several times a day (and in the middle of the night) without reminders. Much less keeping track of their lancets and drawing blood at the right intervals, somehow scheduled into their busy new lives away from home.

Thankfully, Canadian parents have a gentle, easy option for their “big kids” (18+): the FreeStyle Libre system. 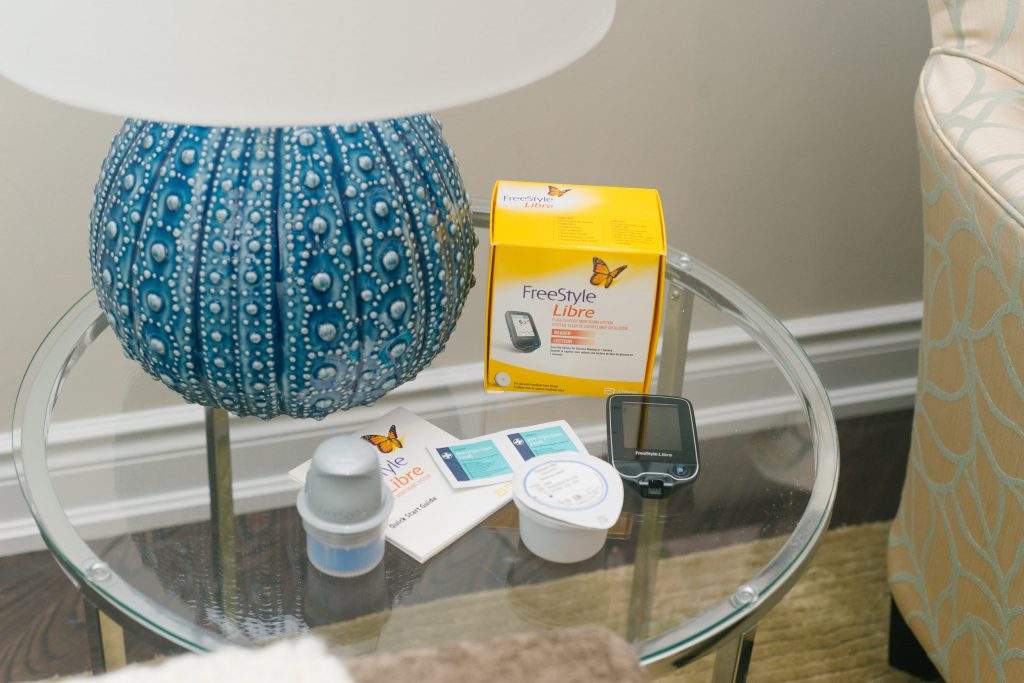 This is the FreeStyle Libre system with all of its components (minus your iPhone!). [Photo credit: Kristen Recalis Photography]

What is the FreeStyle Libre System?

The FreeStyle Libre system is helping people improve diabetes self-management; and effective treatments and innovative technology like this are absolutely critical to prevent long-term complications like heart disease and stroke.

It uses something called “flash glucose monitoring,” which automatically measures, captures and stores glucose-level data through an app that interacts with the device on a patient’s body. This allows both patients and their doctors to see patterns over time and make adjustments to lifestyle, diet or treatment, when needed. 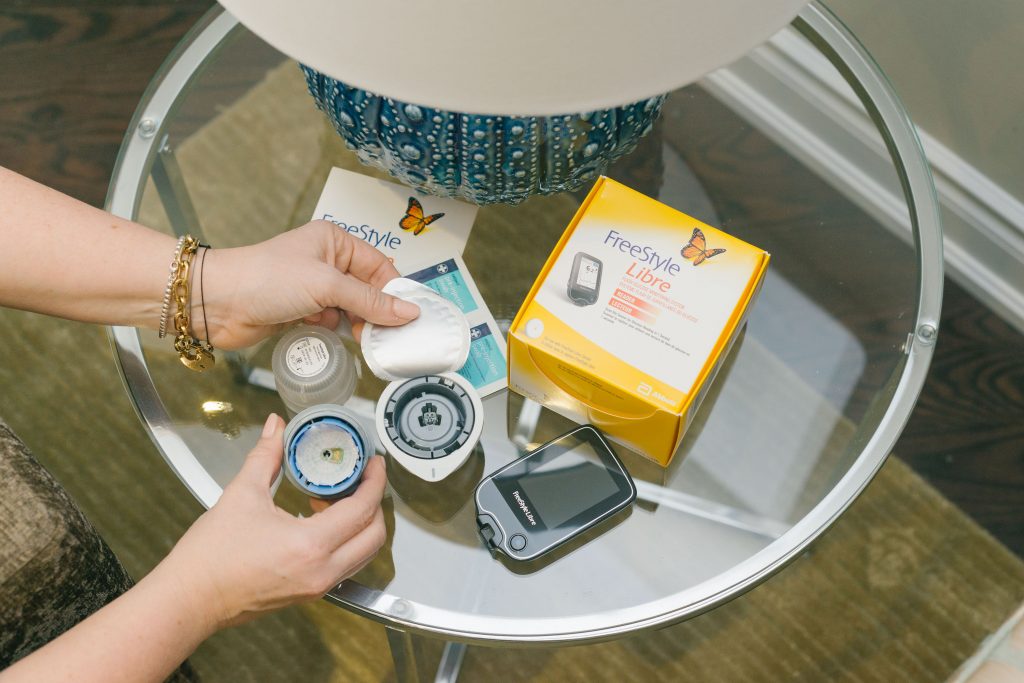 Find out more about FreeStyle Libre here and whether it’s right for you or your child (18+). (Photo credit: Kristen Recalis Photography)

The best part is that the FreeStyle Libre system eliminates the need for routine finger pricks[iii] for people living with diabetes — the one step that patients with diabetes claim is the biggest reason that they don’t test their glucose levels as often as they should.

Having seen how this device works in person, I can tell you that it’s impressive. At an event with a diabetes patient, he showed us how he simply taps his smartphone to the device on his arm and it provides an instant reading. You don’t even need to be connected to WiFi! 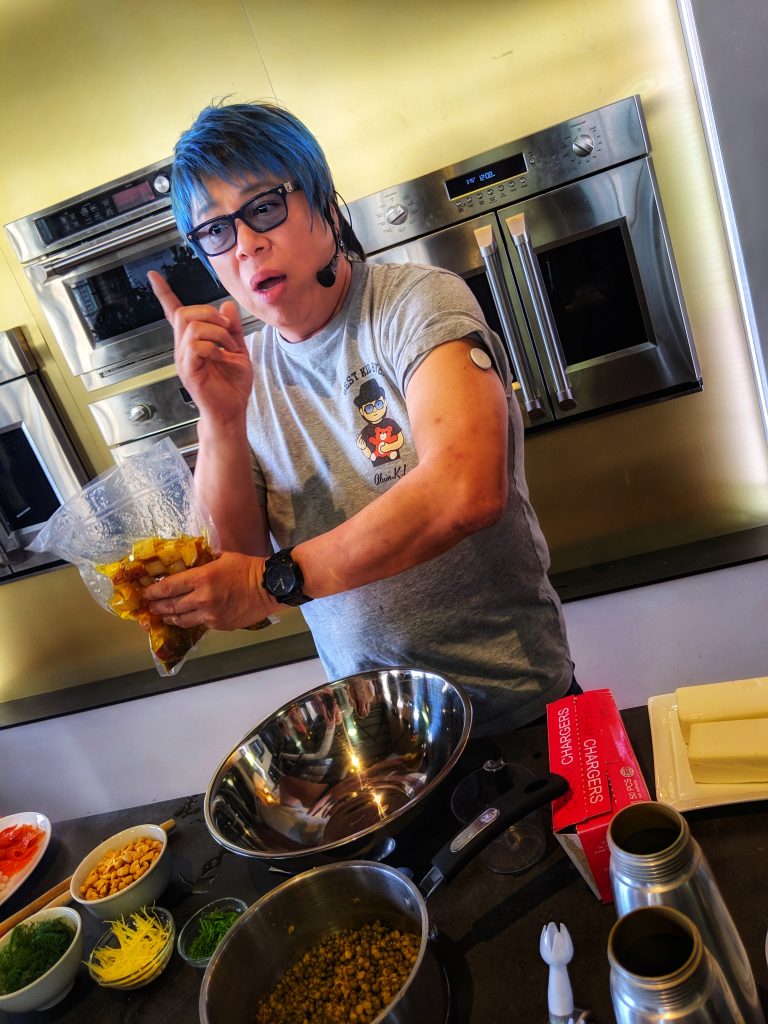 The FreeStyle “LibreLink” app has several cool features of its own: a large, high-resolution display; text-to-speech capabilities for glucose readings (when enabled); and the ability to log small doses of insulin (as small as 0.1 unit). Plus, it supports 26 languages.

If you or your someone you love has diabetes, I’d urge you to look into this system. I have no doubt that you already have enough on your plate. Hopefully, this helps save time and reduce some of the inevitable worry that comes with diabetes management.

DISCLAIMER: Abbott Diabetes Care compensated me for this post. I attended an information-rich event to better understand how the FreeStyle Libre system works to facilitate this post. Please always consult your doctor before making any changes to your health-care regimen.

[i] The FreeStyle LibreLink app is compatible with NFC enabled phones on Apple’s iPhone 7 and later, running iOS 11 and later.