There’s something about which every parent can brag. For some, this might be because your baby walked at nine months old or could count to 10 before 18 months. For others, it might be that your angel could use the potty before any of her little friends or that she spoke in perfect sentences by two.

For me, it’s been sleep. We’ve been blessed, for the most part, with excellent sleepers.

Not to say that there haven’t been a few blips here and there that I’d like to forget, like when The K Man was 4.5 months old and suddenly started waking up at night when he’d been sleeping 12 hours uninterrupted since 10 weeks old. And then from age 12 through 15 months when he insisted that waking up at 5 a.m. (on.the.nose.) was what all the cool kids were doing.

But, really, since we moved back into the 7s for our average wake-up time – sometimes even seeing an “8” on the clock by the time our little man decided to announce that he was awake and ready for someone to come get him – he’s been pretty dreamy on the sleep front.

Until spring 2012. I have no idea what happened. I’d like to blame it on daylight savings time, but we’ve been through a few of those before without incident. Suddenly, we were being woken in the 5s and 6s. Consistently. And as soon as The K Man was up, his sister – who loves to sleep even more than her brother – would follow suit. It felt like lunchtime by 10 a.m. every day.

I put up with this for two months and then, once I realized an intervention was needed, I asked Oyaco (the Canadian distributors for the gro company who make my beloved grobag) for something that’s been on my covet list since I created a covet list: the gro-clock. It’s designed to teach even very young children – who can’t yet read time – to discern day from night without getting out of bed. Also known as wake-up time and you-better-stay-in-that-bed-until-there’s-daylight time.

Above all else, the gro-clock works. Most of the time, anyway. Mornings one through three were dicey, with my firstborn testing the waters (“Hmm…what will Mommy and Daddy do if I get up before it’s yellow?”). By the third night, we’d learned that a reward/consequence system needed to accompany the stay-in-bed-until-it’s-yellow directive. We implemented a no-TV-in-the-morning consequence if The K Man was out of bed, for any reason other than to pee, while that clock glowed its glorious blue. We have the occasional morning when I’ll hear the pitter-patter of little feet running from bed to toy bin and back again, only to turn on the video monitor and see The K Man’s bedroom light on, but it really only took nine nights before the gro-clock started working really well for us more often than not. We’ve even had mornings when he’s slept well past the designated wake-up time, which has been inched up from 6:15 a.m. to 7 a.m. during the last two weeks. 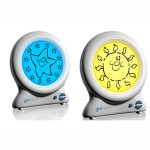 Its simplicity – blue for night, yellow for day – is easy for young ones to understand. Although the manual states that the gro-clock is “suitable for age 2+” I’m not sure it would work for (most) kids under age three; so if you have an early-rising two year old on your hands, you may need to think of something else for a few more months. But for a three or four year old – at least my four year old – it is absolutely worth the $50 investment.

Every gro-clock comes with a little book about a pig who’s a grump and too tired to have fun and play with his farm friends. He gets a special clock that teaches him to sleep until daytime and, what do you know, he perks right up and everyone loves him. Look, it’s no Sandra Boyton, but its message is age-appropriate. Plus, there’s a spot near the end that triggers you to set the clock to nighttime and your pre-selected wake-up time. The “sun” on the face of the clock winks and fades to blue with stars around the perimetre.

I can choose to show the time, digitally, on the gro-clock or simply show the blue face with stars or the yellow sun. This is great when kids start to understand numbers and reading time on a clock. Right now, I’m happy to keep the clock turned off, especially since I’m still playing with wake-up times.

Also, as The K Man gets older, we can set an audible alarm, too. Because I know the day will come when we’ll be fighting to roll him out of bed in the morning. Please, God. Let it come.

The option to set two separate wake-up times (which can be either weekday/weekend or night/nap) is a well-thought out feature.

Out of the box, the gro-clock is exceedingly bright. It illuminates my son’s room more than any nightlight we’ve ever owned. It’s like a beacon in the night. There I was, thinking how much I’d love the option to lower the LED’s intensity, and I started leafing through the manual. Either there are parents on the gro-clock design team or said team has solicited parent input because there are not just a few brightness levels – there are 11! Halle-frickin-lujah.

There’s a bit of a learning curve with all the buttons; frankly, I’d love ONE button that’s dedicated just to setting the clock at night without having to fumble through any extra steps each night. Better still? There should be an option that allows me to set a regular sleep/wake cycle that just re-sets itself each day.

There’s no battery compartment; you can only plug the gro-clock into the wall. But what if the power goes out in the middle of the night? In a newer subdivision, it seems to happen to us more frequently. I rely on the battery back-up in our white-noise machines and alarm clocks. Not that I’m worried about missing an alarm, mind you. I haven’t had to set my alarm – save for maybe three occasions – in years. I just like to know what time the offspring are forcing me from my warm bed each morning.