Sleep is my obsession.

This goes for me and my kids. I like to have at least nine hours at night and my kids are 12-hours almost without fail. Of course I write this the day after The K Man had a nightmare at 3 a.m. and Miss Q had me up at 5 a.m. to nurse – but that’s pretty rare.

I’m really into routines for just about everything, and creating a go-to-sleep routine (which, admittedly, is a Go the F*** to Sleep routine some nights if you’re in sleep-training hell) was at the top of my priority list soon after giving birth – both times. Around here, we have dinner at 5 p.m., do bath time – if they’re dirty…we’re kind of Euro-style on baths round these parts – get into jammies, brush teeth and go into the kids’ rooms for stories and songs before lights out around 6:30-7ish.

Until The K Man aske 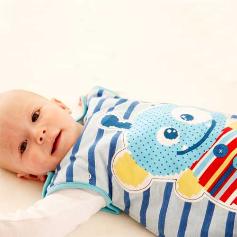 d for a big boy bed at the ripe old age of three years and three months, he wore a Grobag sleeper at naptime and bedtime – no exceptions. He actually cried the first night he was in his toddler bed because we’d packed up his Grobag. Miss Q is the same; she excitedly dives into the open Grobag on the floor, trying to wriggle into it herself.

After both of our kids were done with swaddling – around the six-month mark – they went straight into Grobags. And along the way, it just became synonymous with sleep. It’s part of the routine and the sleep association works wonders for us. Like clockwork, Grobag goes on and child produces yawn…magic (ooh – rhyming magic!).

I think the most important feature of Grobags is the safety factor. No blankets in which to get tangled – or, worse, smothered. Remember: you’re not supposed to have anything in baby’s crib in that first year – no bumper pads, no stuffed animals, no sleep positioners and no loose blankets. Infant sleeping bags ensure that babies stay warm all night – and you can sleep well knowing nothing’s going to end up over their faces.

The sizing is quite generous – there’s 0-6 months, 6-18 months and 18-36 months sizes. Since we started around six months, we only had to buy two sizes of Grobags. At the top end, it really does fit them until they’re three. The K Man is on the taller side and made it all the way to the toddler bed stage.

If you live in an older home, like we did in The Big Smoke, your house’s temperature is probably inconsistent. We had some rooms that were smokin’ hot while others were frigid. For this reason alone, you’ll love the “tog” ratings – essentially the warmth categories that Grobag makes: the higher the tog, the warmer the product. We use our 1.0 tog Grobags in the summer months and the 2.5 tog the rest of the year. Yep, this means you need one of each tog in every size you buy.

Every Grobag sleeping bag comes with a nursery thermometre (don’t get too excited, it’s just a laminated piece of cardstock with a temperature strip on it); this will help you determine whether you need a 1.0 or 2.5 tog sleeper. HUGE NOTE: you do not need a Grobag Egg! (What a waste of money that was.)

If you start your baby in a safe sleeping bag early enough, I think you thwart the climbing-out-of-the-crib athletics that some babies perform later in the first and second years. They just can’t swing their leg up and over the rail while it’s zipped into a Grobag. Now the truly adventurous baby will probably find a way around this, but neither of mine have ever tried a crib escape. I think this also goes for the diaper-removal experts – you know the ones, when you leave, they’re fully clothed and when you return after a nap, they’re buck naked. A Grobag will, at a minimum, slow them down.

There is a massive selection of colours and styles – any colour you need is available. Might I suggest, however, that you purchase gender-neutral styles if you’re on baby No. 1 and planning to have more? Poor Miss Q wore a blue and white Grobag with trucks and wrenches all over it for six months. She didn’t mind. I did.

A brand-name sleep sack like Grobag is expensive (around $50-80, depending on the style and fabric). Yes, you’ll use it at every nap and every night. But if you’re a crazy person like me, you’ll want to buy two of each tog in each size (that makes eight altogether) so you always have a clean one on hand. The good news here is that you can make at least half your money back selling it used; they retain value really well.

The styles aren’t consistent. Some snap at the shoulders (not good for the extra-curious diaper-removal expert), some zip up the front while others have no snaps and zip up the side. You may find a colour you love with a style you don’t.

I had a really bad run with a 1.0 tog organic Grobag (the Home Grown Baby style). The snaps at the top kept breaking through the fabric. I went through three of them before switching to the organic Hopscotch style. To Grobag’s Canadian distributor‘s credit, they made exchanging it pretty painless.