Our winter lovin’ continued this past weekend with a jaunt to Hockley Valley Resort, which is in a town called Mono in Ontario. (Yes, like mononucleosis but way, way better.)

About an hour north of Toronto, Hockley Valley is one of those weekend retreats you hear about growing up in the GTA. I don’t know what I was expecting exactly, but it blew me away and now I want to go back for March Break! And starting at just $266 per night for a family of four — which includes lodging, lift tickets and breakfast — we just might.

I know that writing about a resort means there are lots of activities to get to. And I will. But I have to start with the food, because it was hands-down the best food we’ve had at any resort in Ontario.This is quite likely because of Hockley Valley’s commitment to serve as much local, organic food as possible. It’s fresh, full of interesting flavours and presented so beautifully. Cabin restaurant, in particular, deserves a huge shout-out; our dinner there was a clear highlight during our weekend visit and if we lived closer, I’d be going for dinner much more than my wallet may like. If you’re a foodie, then get to Cabin. Stat. 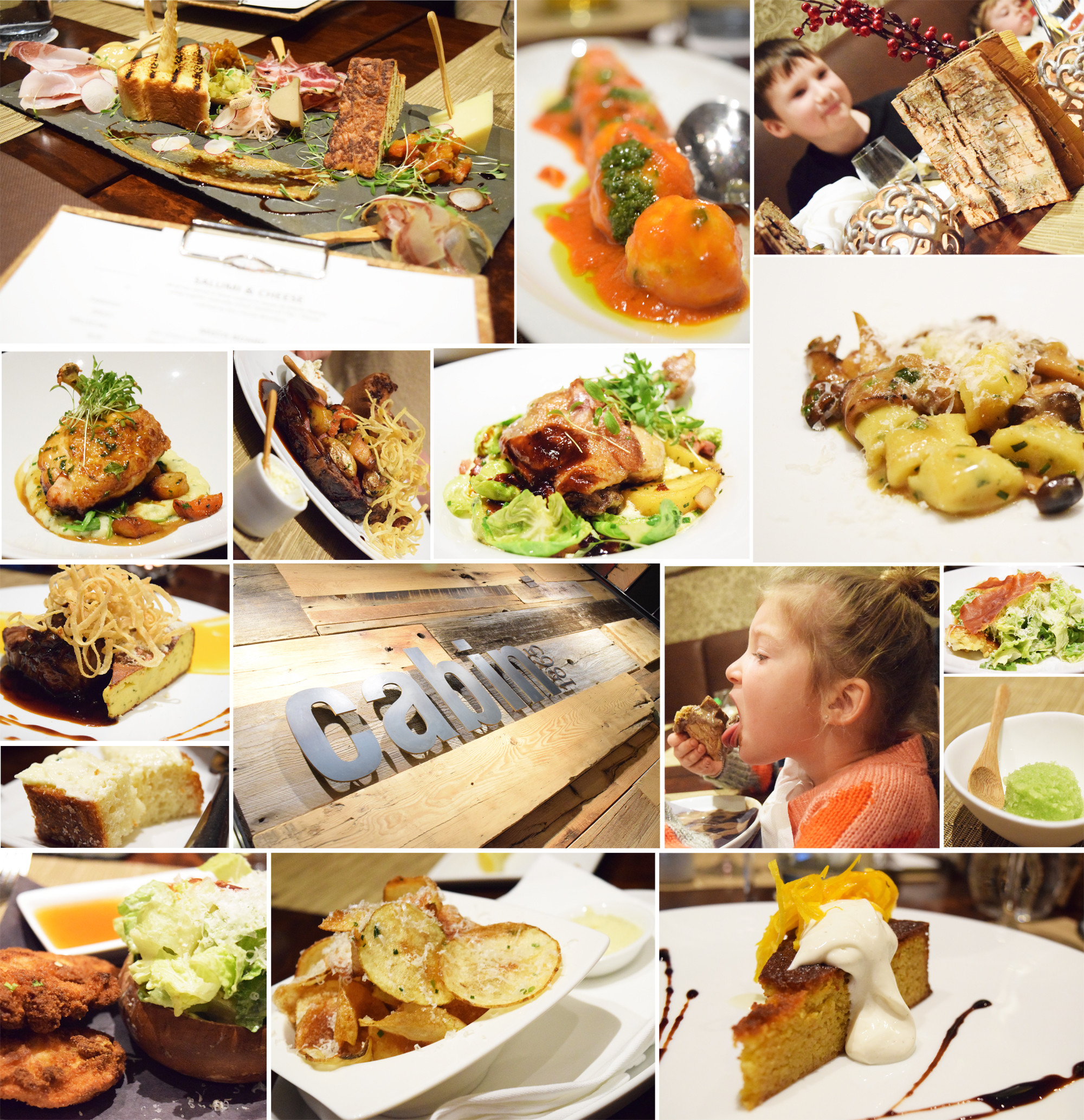 Some must-eats at Cabin include:

Hockley Valley Resort’s buffet breakfast is easily one of the best included breakfasts out there (I strongly recommend booking a package that includes breakfast so you don’t miss it). There were ricotta pancakes with local maple syrup, smoked trout, whipped butter, a local sheep’s milk cream cheese that paired brilliantly with fresh croissants, a divine nutty granola, Ontario preserves…and the list goes on. One of our breakfast highlights each day, however, was our server, Kristin. She was one of the most personable servers we’ve had anywhere and we really enjoyed chatting with her.

Before I dive into what we did at the resort, I want to show you how stunning this place is. I don’t know if it had a major facelift in the last couple of years, but it’s got a really modern vibe and the styling is on point. There were two weddings there the weekend we visited Hockley Valley, and I could see why. Between the excellent food and the many spaces that needed no decoration at all, it’s a great event space. And the rooms are no different, with big barnwood-style hardwood flooring, comfortable beds and nicely appointed linens. When you Google “Hockley Valley Resort,” the search tells you that it’s a three-star hotel, but there is NO WAY I would put this at anything less than a four-star.

Let’s talk ski instructors. Our kids had Claire and Amanda for private lessons. Normally we put the kids together in a semi-private lesson, but Hockley Valley’s policy is that kids under six must have their own instructor. Yes, this means you spend more overall but it also means that your kids get tailored instruction and all the individual help on the chair lifts they need. In the end, this worked out really well for my

kids because Miss Q’s ability has surpassed her big brother’s and she’s comfortable on blue and black diamond runs, while The K Man still needs to be bribed (heavily) to venture to the easy blues. Both kids raved about their instructors and even after two hours, neither was ready to stop skiing. For The K Man in particular, this was big news. Not only is he usually hesitant to go with anyone new, but he also usually requests a break every hour — neither posed a problem at Hockley, though, and that’s a testament to the quality of the instructors there and their ability to connect with students. Personally, I find ski school the best investment in every ski weekend, because it means you get some time to ski at your own pace.

We really enjoyed the ski hill at Hockley. It’s on the smaller side, which is perfect for beginner and intermediate skiers. Even strong intermediate skiers will find challenging runs here; I looked up at the double black diamond and thought, “Nope.” But three of the four of us did do a couple of black diamonds, which were steep and fast and a heap of fun. That said, we mostly stuck to the green run, the terrain park and the blues. We loved taking the green “Easy Rider” route, then cutting through the terrain park and doing the boxes (we’re all learning tricks now!) before taking a sharp left through the “Tunnel” and ending up at the bottom of the black diamond “Face” run.

I don’t know if it’s the way they make snow, or if it’s that the quality of real snow is better in Hockley’s neck of the woods than all of the other Ontario ski resorts we’ve been to this year, but the powder quality was simply excellent. It wasn’t icy. It wasn’t slushy. It wasn’t too slick or too deep. It was…perfect. Easy in which to turn and stop when you needed to, which is exactly how I like it.

There are only two chair lifts, but both work swiftly and reliably and get you to the top safely.

Now I need to tell you about the spa. Ahhhhhhhh. First of all, once you change into your robe, you walk into a hallway where it encourages quiet. So you already know you’re in for a treat. Then you find this gorgeous lounge that looks like an Erika Veh-fluffed room in Downton Abbey, with magazines and a roaring fire and tea. Bliss is putting it mildly. 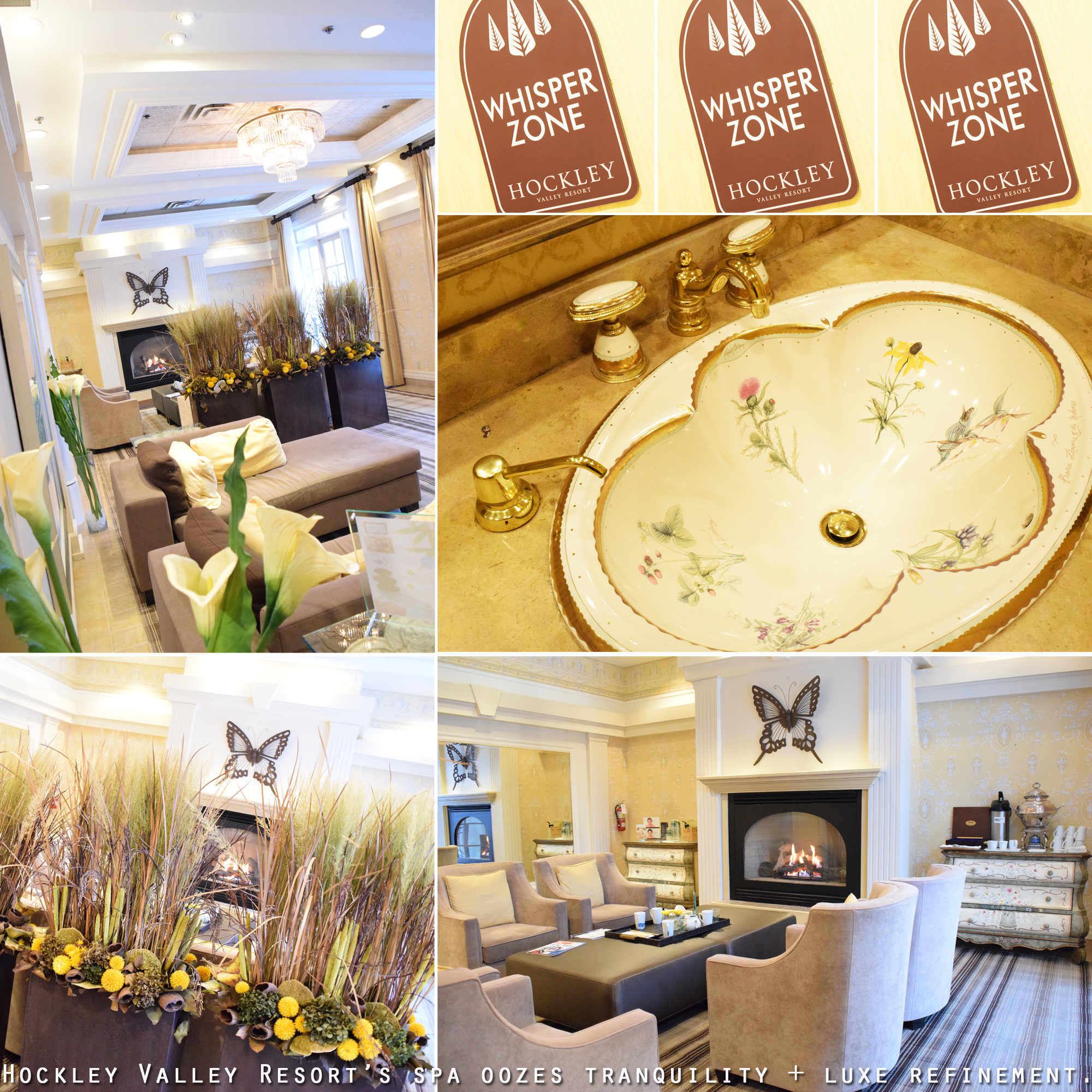 Before almost nodding off from the wonderfulness of it all, you’re reminded that it gets better still thanks to the service you booked! I was treated to a detox mud therapy session, which — and I’m not even toying with you a little here — rivaled the services I’ve had at Ste. Anne’s Spa. Because it wasn’t like the aesthetician just slapped some mud on me and let me nap for 75 minutes. No. First, she gave me a full-body scrub with the most heavenly smelling lemongrass scrub, which I learned is made by a local artisan. Then she slapped the mud on me — warm mud, I might add. Glorious. Then came the wrapping up part, which I always love because it’s so cocoon-like and cozy. At this stage, I figured Sarah (the nice lady who just rubbed mud all over my body) was going to tell me to relax in the room while the mud did its thing. Not so! In fact, she then gave me a facial and head massage before it was time to rinse off all the mud in a hot shower. After this, there was more (!!!). I was covered in body butter and my face was moisturized and she even applied eye cream. Talk about full service. (And I confess that I stayed in the lounge for a coffee afterwards just so I could remain in the quiet zone a little bit longer.)

While I loved the tranquility of night skiing at Hockley Valley Resort, I found it a bit on the dark side. I’d love for it to be lit just a tad more.

I ordered a Noble Tree Cabernet Sauvignon at Cabin, in part because I’m a California red wine freak and in part because I was happy with the $60 price tag listed on the wine menu. (And it was really good, by the way.) So imagine my surprise when the bill came and I was charged $80. When I quietly let the server know there must have been a mistake, she explained that the price had increased by $20 but they hadn’t changed the menu yet. And then I waited for her to grab my receipt apologetically and say, “But of course that’s our error and we’ll get you a new bill.” But there was silence. We looked at each other awkwardly until I said, “But I ordered it because it was $60.” At which point, she took our bill (very nicely) and had it corrected. But for that awkward silence, it wouldn’t have even been worth mentioning in this review.

The spa techs need to explain how to turn the shower off. I couldn’t figure it out for the life of me. Blond moment. (My gaffe, really.)

The bunny hill only has a handle tow. These were difficult even for me to hold onto and my kids were extremely frustrated. Good thing we’re all too advance for the bunny hill now! GREAT NEWS: Hockley Valley is getting a magic carpet for the 2016/17 season!

I found the food in the ski cafe on the spendier side. It still has that local/organic thing happening, so I get it. It costs more. But $70+ for lunch for a family of four and $29 for not a very large pizza at dinner time is a bit rich. I suggest upgrading your package to include the breakfast buffet, splurging at Cabin for dinner each night but bringing your own lunch in a cooler and eating it in the cafe.

You aren’t allowed to wear your ski boots from your room down to the cafe where you get ready to head outside. So you have no choice but to bring your boots down and even a bag to stuff them in to keep them together.

But there are no lockers, so your boots/bag just has to sit out in the open. Not a fan. #TrustIssues

« Yoga Design Lab: The Combo Mat (guest review)
The Harlem Globetrotters are coming to Toronto and I’m all SQUEEEEEEE!!! »