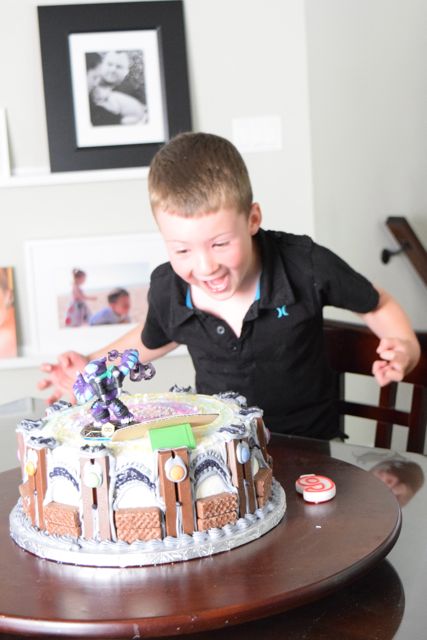 Just a wee bit excited when he saw his birthday cake.

He had begged me for months.

“Mommy, I’m serious: the only kind of cake I want for my birthday is a Skylanders Portal of Power cake.”

I’ve proudly made and decorated each of my kids’ birthday cakes every year. It’s kind of my thing. But my “thing” also involves renting a pre-formed Wilton cake pan from Bulk Barn that comes with instructions that are as easy as paint-by-numbers. I’ve made a monkey, Wall-E, Dora and the list goes on.

But guess what? There is no Portal of Power cake pan. I would have to brave this one on my own. So I did what any cake-fearing mother would do: I Googled. Lo and behold, it seems most parents went to Fondant School of the Arts before embarking on their Skylanders cakes and all I could find was picture after picture of these elaborate fondant-fueled cakes. There was no way – considering I Googled the night before the party and the fact that I don’t know how to make, roll or stamp fondant – I was going to be able to pull those off.

I decided to wing it. I unplugged The K Man’s Portal of Power from the Wii, brought it to the kitchen and made a shopping list:

Here’s your step-by-step process to make a Skylanders Portal of Power birthday cake (scroll all the way to the end for more photos):

The K Man was beyond ecstatic when he first saw his Portal of Power cake, and he declared me the Ultimate Skylander Mom. And that’s the best gift he could have given me on his birthday.