When HP’s PR agency asked me if I had any “older adults” in my life who would like the convenience of a tablet with an extremely easy-to-use platform, I volunteered my parents to test out the HP Slate 7 tablet.

My Dad has been the primary user, and wrote the below review, so let me give you a snapshot: he’s a 66-year-old retiree who lives in the suburbs, likes to watch TV, play with his grandchildren and travel. He’s a classic “dude” who’s into cars and whisky. He and my mom only own a cellphone because my brother bought them one about eight years ago and I doubt they could even tell you the phone number. I have never once bothered to try reaching them on it because it’s always turned off.

I did not grow up in what you might call a tech-forward household. We didn’t have “double-line” and it took my folks until long after I moved away from home to get voice mail. When I wanted an answering machine in high school, they made me buy my own because “if it’s important enough, they’ll call back.” There were rarely any new gadgets coming into the house (which begs the question: Are these REALLY my parents?!). Neither of my parents are on Facebook and my mom hasn’t had an email address since she retired.

To help paint a final picture, you need to know that WEEKS after my parents starting playing with the HP Slate 7 tablet, I discovered that they had not yet removed the screen protector that comes from the factory. When I peeled it off, they were like “Wow! The colours are so much more vibrant!” Yeah.

I was asked to review the HP Slate 7 tablet and set it up from scratch. This may seem simple to most, but it was somewhat daunting to me. I have been retired for four years and had not used a computer daily since.  I do not own one and have access only to  my daughter’s when I’m at her house. My son set up my e-mail.

Andrea made it clear that she would not provide any help setting up the tablet. She wanted this experience to be as authentic as possible, so we had only the manual that HP provided to get it up and running. 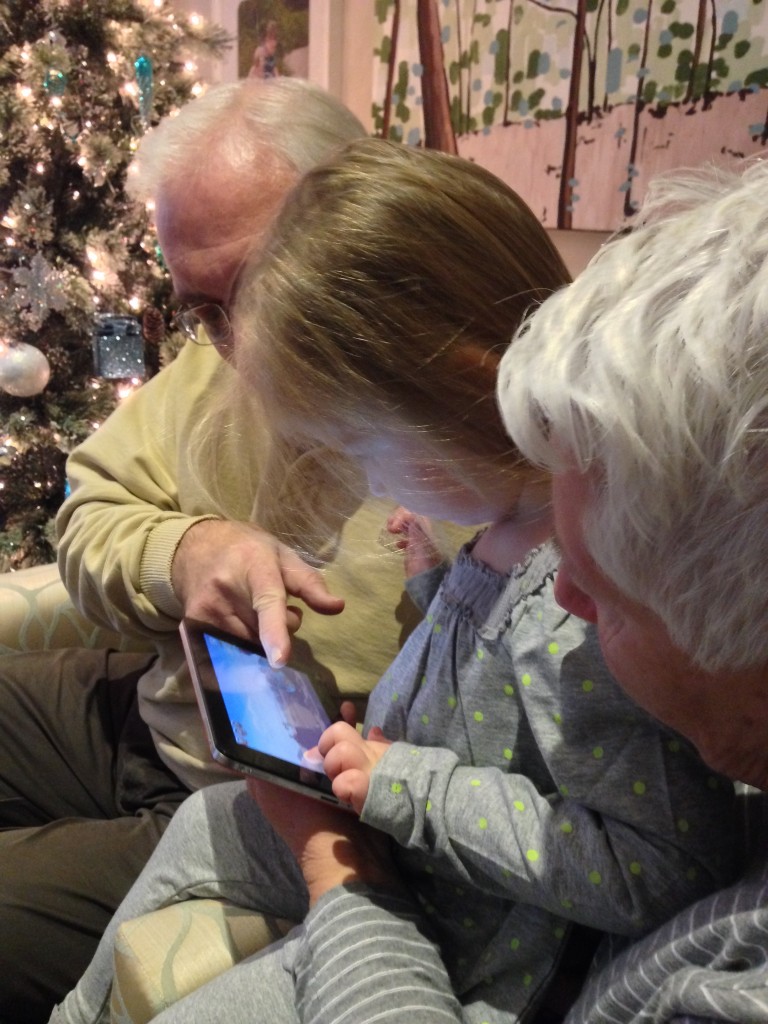 My parents learn a thing or two about using a tablet from their two-year-old granddaughter.

Once charged, the on-screen instructions were easy to follow. I had very little difficulty in moving forward and the process was finished in about 15 to 20 minutes. I don’t know if that is particularly good, but I felt pleased to have done it on my own.

I happily and easily downloaded apps. Most of them are for me, however I have some for my grandkids. They eagerly ask to use it every time I come over. I was glad the tablet came pre-loaded with a number of interesting and useful apps that interested m, too.

The sound is very clear and we are impressed that the quality is so good considering the tablet is very compact. Andrea tells me it’s because of the built-in Beats Audio, but I have no idea what she means.

Battery life is good, I think, though I don’t really have anything to compare it to. We use the tablet Monday through

I continue to be amazed at how much fun the HP Slate 7 tablet is, and I will now be able to keep in touch with my family when we go on holidays. I enjoy using it so much that I would seriously consider getting an Internet connection at my house to use it. For now, we will use Andrea’s and she can pay for it!

Finally, the price is excellent. At $149.99, this tablet is much more affordable than an iPad. In our experience — because we have used Andrea’s iPad for the last couple of years with the kids — the HP Slate 7 tablet is just as good.

At times during set up, I had to slowly type on the keyboard. It seemed the faster I went, the worse it got. The HP Slate 7 tablet could not input the characters swiftly at the beginning, which caused me to make a number of corrected entries.

Sometimes, in the middle of using an app, the sound will simply disappear. Exiting out of the app and going back in solves the problem, but it is certainly strange for something so basic like sound to be an issue from a reputable brand like HP.

It doesn’t seem as easy to drag one’s finger across the surface of the HP Slate 7 as the iPad, but it doesn’t stop any of us from using it.

The camera is fine but nothing special.