Before you read all about the IBEROSTAR Las Letras Gran Vía, be sure to check out my top tips for things to do in Madrid.

I’m not sure there’s a bad part of town to stay in when you visit Madrid. I wandered around the city a fair bit and saw nothing but one beautiful building after another and felt safe all day – and night.

But there certainly is one area that’s the most ideal for a first-time visitor, and that’s the Gran Vía. Meaning “the great way,” it’s akin to London’s Oxford Street or Toronto’s Yonge Street — bustling with foot traffic at all hours and teeming with high street shops like Primark and Zara. It’s also considered the Spanish Broadway because of the numerous theatres and musicals it hosts.

Our city guide called Gran Vía the street that never sleeps. And it’s true. I was out there mid-morning to grab a Starbucks, in early afternoon to shop and at 5:30 a.m. after a particularly epic night in a nearby neighbourhood to gorge on McDonald’s before hitting the hay. Even in the wee hours, you’d think you’re in Manhattan during rush hour.

Gran Vía is also one of the only streets that serves as a thoroughfare in Madrid. In many cases, you can walk up a city street and find it twist, turn or come to a crashing halt unexpectedly. But not Gran Vía. And because of this, it serves as a central part of Madrid that makes coming and going (and finding your way back in those wee hours…) very straightforward for newbies.

I was fortunate to get an invitation to spend two nights at the IBEROSTAR Las Letras Madrid, ever-so-conveniently located right on the Gran Vía.

The location is, without a doubt, one of the most superb in Madrid. Within easy walking distance of world-class museums like the Thyssen, restaurants, shopping, theatres and the opera, nightlife and hotspots like Puerto del Sol, Mercado de San Antonio and the famous El Rastro open-air flea market, it’s the perfect hub for all of your Madrid activity.

The price, considering it includes a spectacular breakfast, is very good. During high season, expect to pay between 150 to 250 Euros a night, with low season dipping to as little as 56 Euros.

Speaking of breakfast, let’s just spend some time talking CHURROS! Because the buffet includes the most fantastic churros I ate in Spain. And I feel confident that I really did my research in this area. But that’s not all — with an enormous selection of cured meats and beautiful cheeses, fruits, yogurt, fresh pastries (the chocolate croissant was fantastic) and made-to-order eggs and sides like chorizo, there’ll be no need to have lunch while you’re staying at the IBEROSTAR Las Letras. 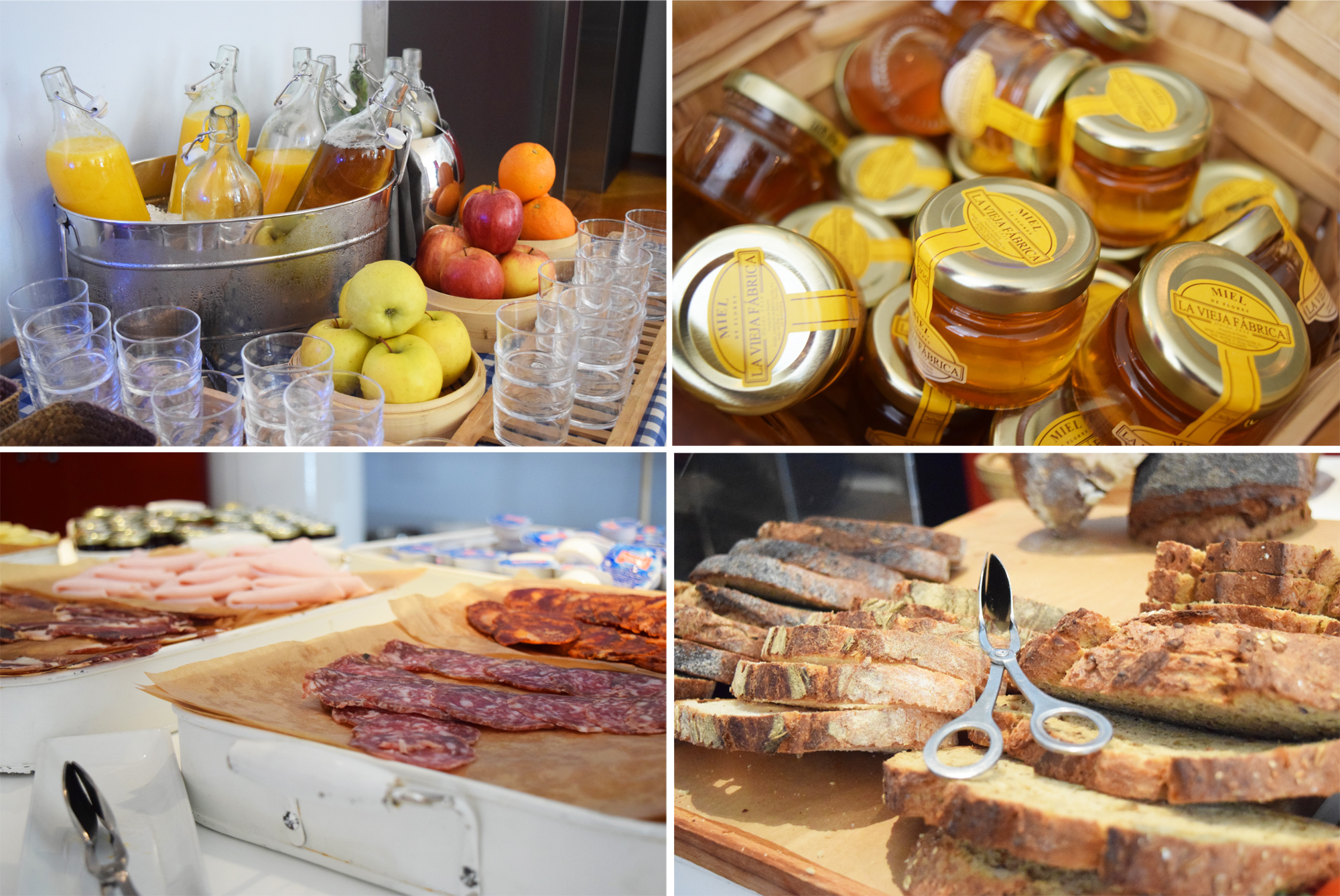 But if you do…the breakfast zone turns into a chic restaurant perfect for lunching, too, called Al Trapo. And it doesn’t feel like you’re in a typical hotel restaurant at all. In which case, you must have the smoked cod dish if nothing else. It’s a highlight among all of the truly wonderful food I had throughout our entire trip.

But dinner at Al Trapo was also excellent, with dishes almost too beautifully presented to eat. Almost. I ate every last thing. Right down to the chocolate-done-three-ways dessert. Mmmm-mmm-good.

Since we’re talking food, let’s just move right along to a rooftop dinner option, shall we? Because when the weather’s nicest (think mid-May through mid-October), Atico 11 on the IBEROSTAR Las Letras’s rooftop, is outstanding. Both in terms of ambiance and food quality. After stuffing myself on what had to be a total of 11 courses as we sat under the moonlight (including a round or three of the most perfect Sangria that will ever touch your lips), I can say with total confidence that Atico 11 can compete on the world foodie stage with ease.

The dishes were elegant and presented with creativity and sheer excellence, like the ox beef tartare that arrives ready to assemble with a freshly cracked egg at the table or the crusty baguette slices topped with shaved dark chocolate chunks and finished with torn mint leaves and a drizzle of Spanish EVOO. 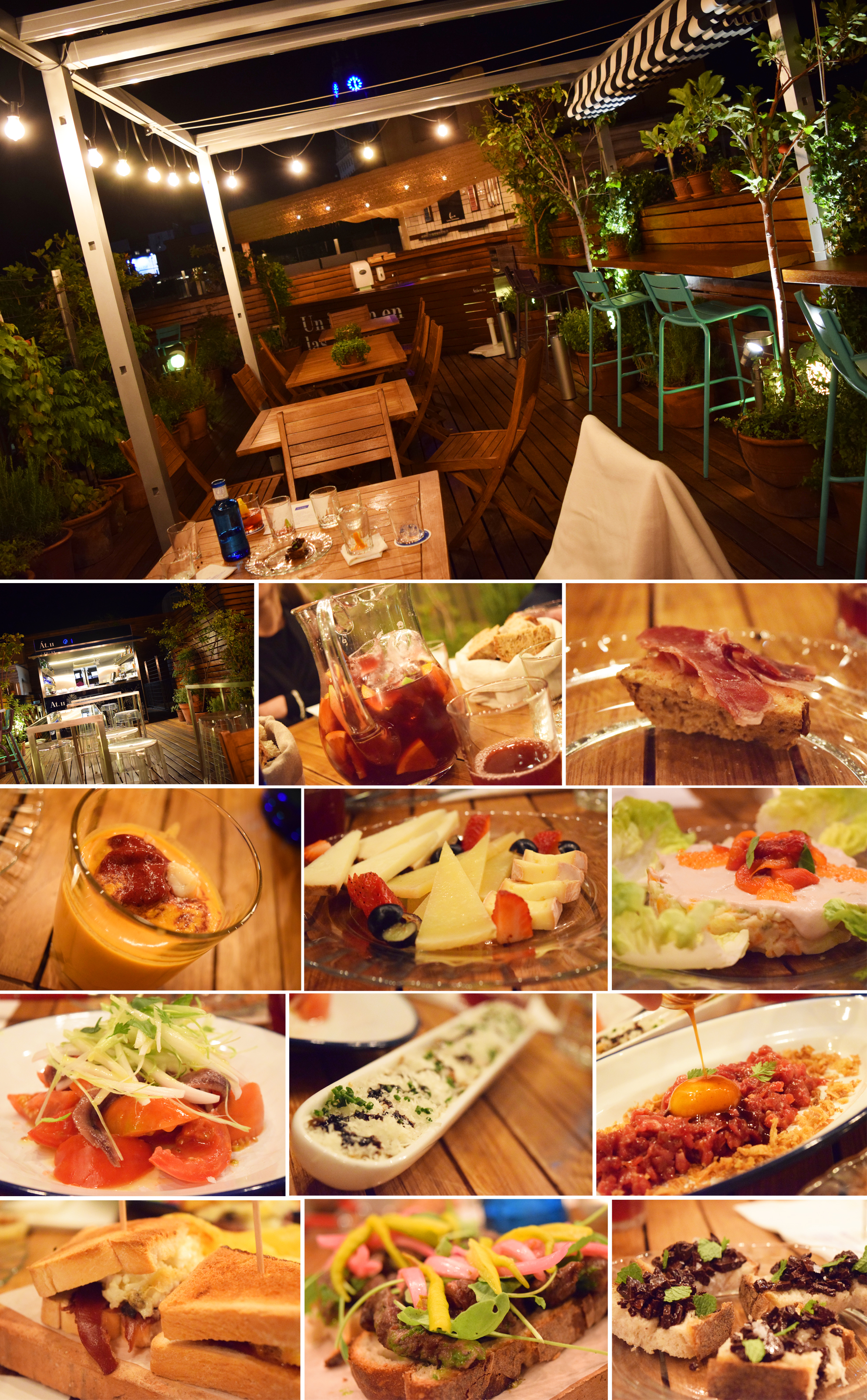 Service both in the hotel’s restaurants and the front desk was beyond amazing. And everyone spoke English, which was fantastic since my Spanish is on the verge of non-existent. Those manning the front desk were not only well-versed in public transportation (like providing me with alternative routes when they found out I was trying to take a Metro line that was temporarily closed for refurbishment), but also in the city’s history. On several occasions, when I mentioned where I wanted to go, staff made recommendations about what to see and do around that area and even provided information about the area itself — the architectural timeline for example.

Free Wifi. And it was consistently strong throughout the hotel.

Got a small dog? No problem. For 30 Euros, you can bring your pooch along and find a bed, water bowl and food bowl waiting for you in your room.

The history of the building in which the IBEROSTAR Las Letras now operates is long. With beautiful coffered ceilings throughout and a richly tiled, vibrantly coloured original stairwell (so quintessentially old-world Spanish), it was once a private home — hard to believe considering there are six floors and it has a pretty significant footprint. This also lends itself to the overall unique vibe you get here. 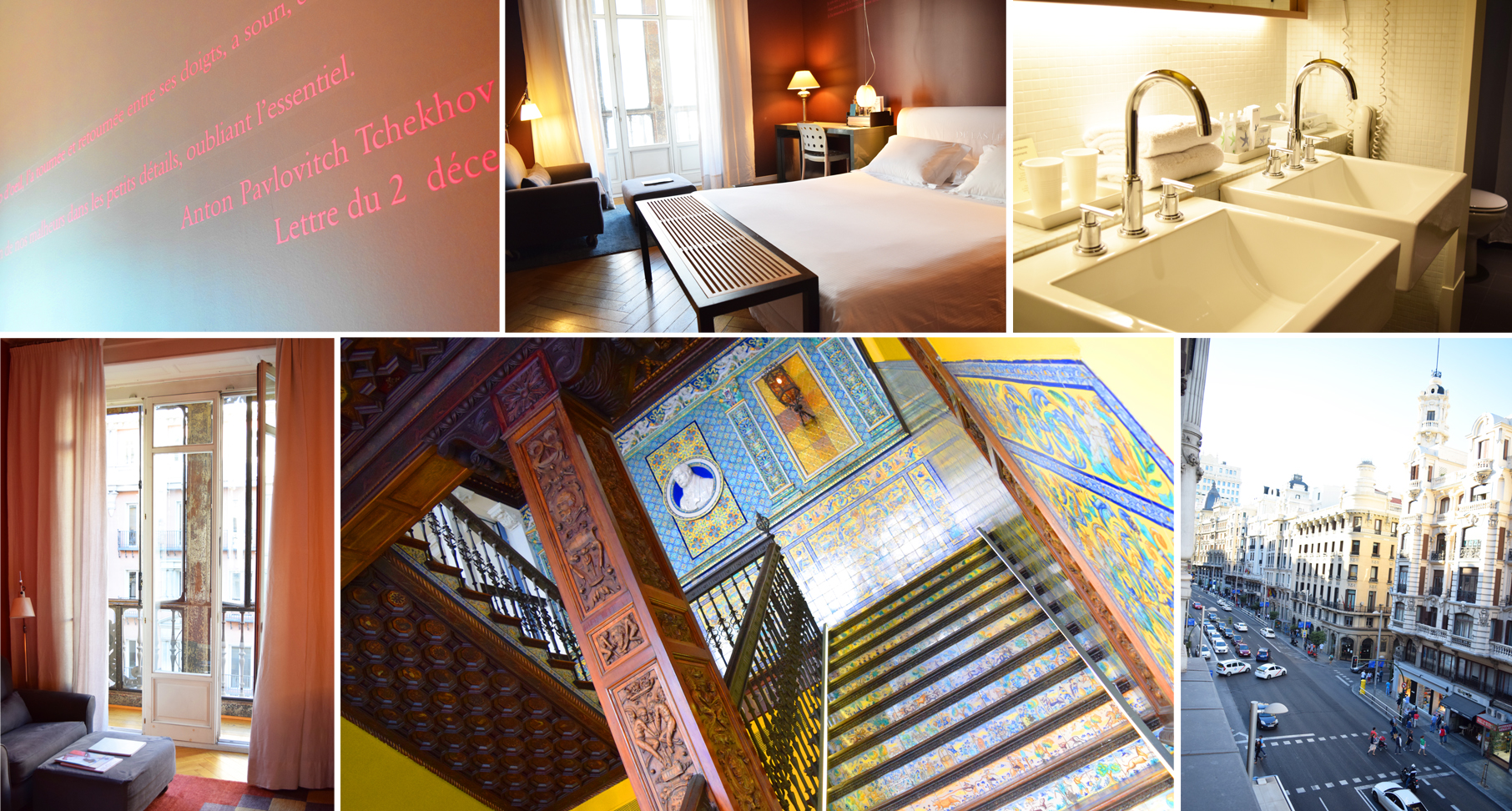 I stayed in two different rooms, both of which I liked very much — even if one was considerably larger than the other. Both had wonderful personality, done in different paint colours and featuring different quotes on the wall by famous authors (we’re in Las Letras, the writer’s quarter, after all). And both looked out onto the Gran Via through stunning original windows that opened onto the warm Madrid air and up and down one of the best examples of European architecture imaginable.

But there were two notable things with the rooms that I have to point out — if only to save you some embarrassment with the first and to help the hotel with staff training with the second.

In the first room in which I stayed, I was settling in and may or may not have gotten into my birthday suit to relax and explore my new space. I wandered into the washroom to turn on the shower and take a peek at the facilities when I saw a curtain at the end of the wall beside the shower. Curious, I drew open the curtain expecting to find a storage area of some kind. Nope. It was, in fact, open to what can only be described as a stairwell without stairs. Like a tall open space — but surrounded by dozens of other windows. Also known as other people’s rooms! I have no idea if anyone else had their bathroom drapes open or if I provided a show that day, but I closed those curtains faster than Clint Eastwood could draw a gun in a Western flick.

During my first stay, I was taking a nap around 4 p.m. and awoke to the sound of my door unlocking and opening. I yelled “NO! NO!” and a woman’s voice apologized and left. I didn’t have the “do not disturb” sign on the door, so I blamed myself and promptly went back to sleep.

During my second stay, four days later and in a different room, I was enjoying another siesta (this is what you do in Spain, after all) and despite placing the “do not disturb” sign on my door, I was again interrupted — only this time a woman (housekeeping, I assume) was speaking VERY loudly to someone else in the hall as she opened my door and turned on all of my lights! IBEROSTAR just needs to have a chat to advise housekeeping to respect DND signs and to ensure that even if there’s no sign on the door that a courtesy knock should always happen before entering an occupied room.

Nothing like this ever happened at the IBEROSTAR Santa Eulalia, so it’s an individual hotel issue – not an IBEROSTAR issue. And, all things considered, it’s a pretty minor issue and would never (ever) prevent me from booking a room here again.

Viamede Resort review
Do your winter boots have a "snowflake rating"? (sponsored post)
"The Horse and His Boy" at the Shaw Festival