It wouldn’t have been the first time we arrived at a ski resort to find conditions less than ideal. But Jay Peak Resort in Northern Vermont — a mere six minutes from the Canadian border — has thought of everything for times the weather refuses to co-operate.

I’ve heard of other ski writers slamming resorts for imperfect snow, icy runs and bare glades. But I just won’t do it. It isn’t fair. Every tourist destination is at the mercy of Mother Nature, year-round.

So. While I can’t tell you much about the skiing at Jay Peak, I can tell you about all of the fun you and your kiddos can have if you arrive ready to ski like we did only to find crazy winds and icy conditions meant you could only sneak in four very short runs one morning of your four-day visit.

And this is really where Jay Peak shines, because there aren’t very many ski resorts that could cope with the masses looking for indoor play options all at once. But here? It’s no problem, mon.

My biggest message: book the full package that includes accommodations, lift tickets and waterpark passes. Just in case. You’ll find a frequently-updated list of deals and discounts for Jay Peak here. Canadians — keep in mind that you can pay for 50 per cent of your package with Canadian dollars!

Things to do indoors at Jay Peak Resort

Jay Peak’s waterpark — the Pump House — will not disappoint. I can’t say that I expected to find such a mammoth waterpark, complete with lazy river and a Flowrider, tucked into a ski resort. I thought we’d roll up to a glorified splash pad.

Boy, was I wrong. 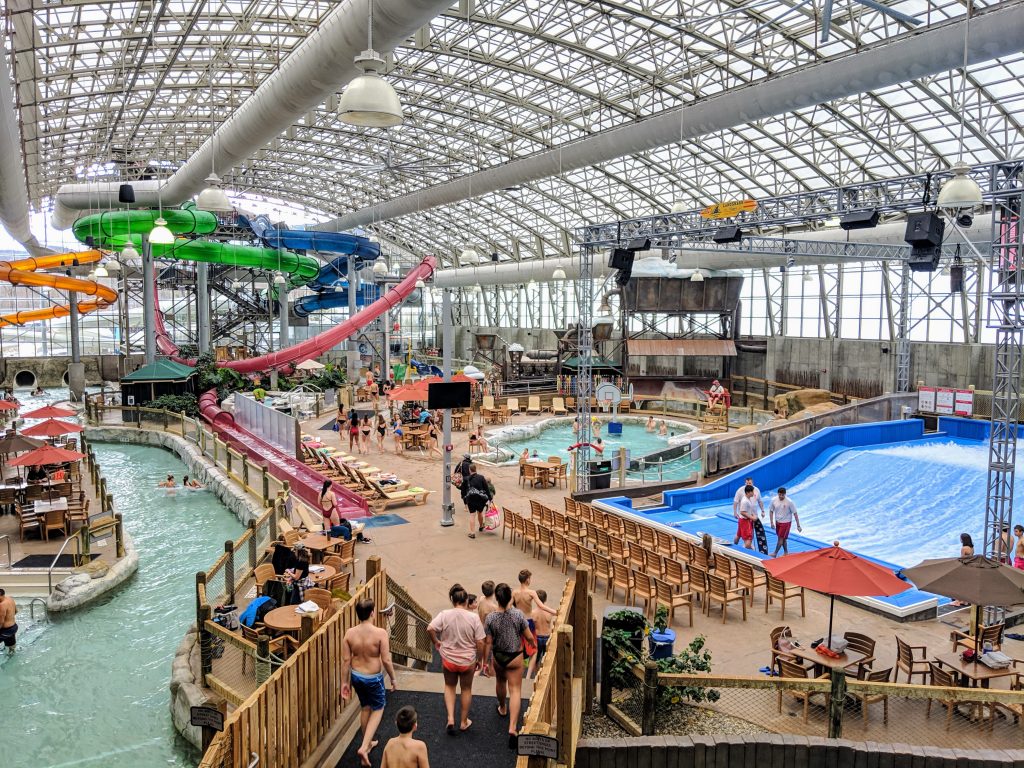 So big, I can’t get the entire waterpark at Jay Peak Resort into one shot.

The Pump House is next-level waterparking. If you’ve ever been to Great Wolf Lodge in Niagara Falls, it’s nearly on par with that kind of wet-ertainment. The only thing missing is a wave pool. In fact, we all agreed that The PumpHouse’s lazy river eclipsed every other lazy river we’ve tried — and that includes Great Wolf Lodge. 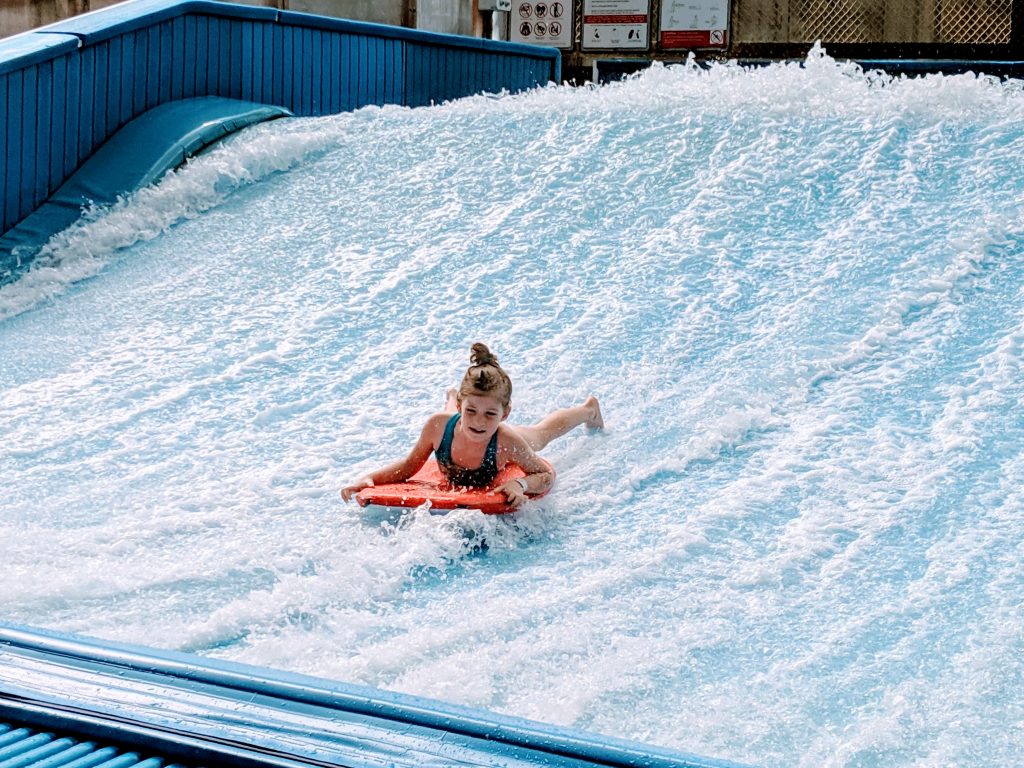 What a treat to have a Flowrider included in the price of admission.

Big waterslides; basketball hoops in water shallow enough that our eight and ten year olds could shoot a few balls with ease but not so shallow that I didn’t want to be in there with them; an in-water climbing wall that gets deep enough at one end that my 6’6” husband was able to take a crack at it; and that lazy river — which has a wavy section built in around one turn, moves at a great clip and is warm enough for wimps like me who like pools heated to warm-bath temperature. 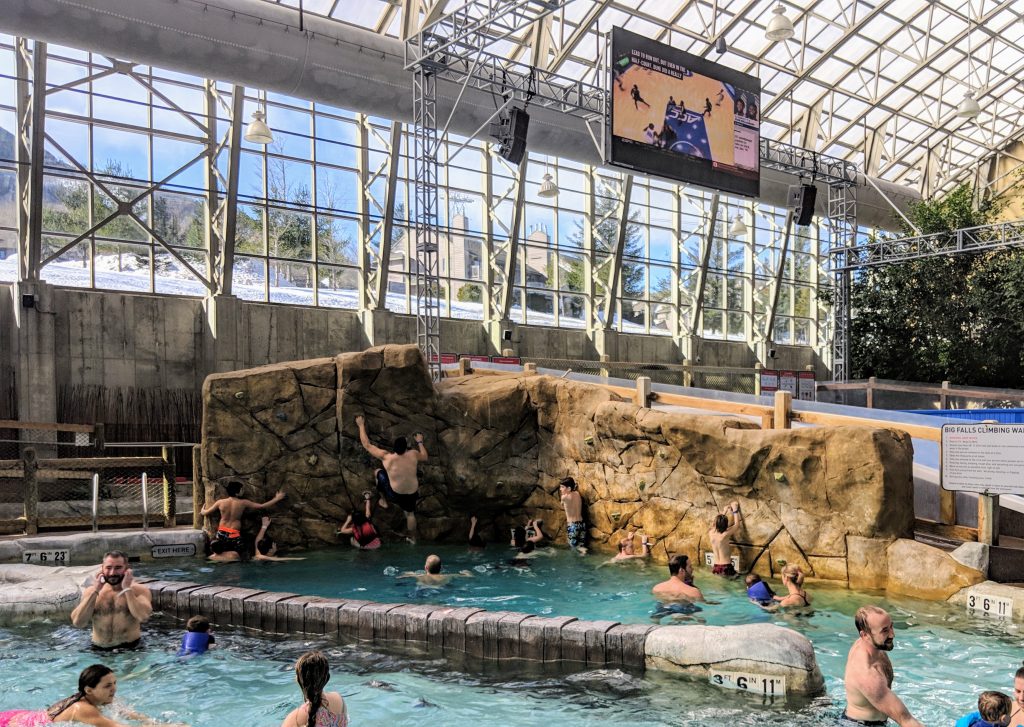 A climbing wall in water? That was a first for us.

There’s even a little splash park for wee ones… 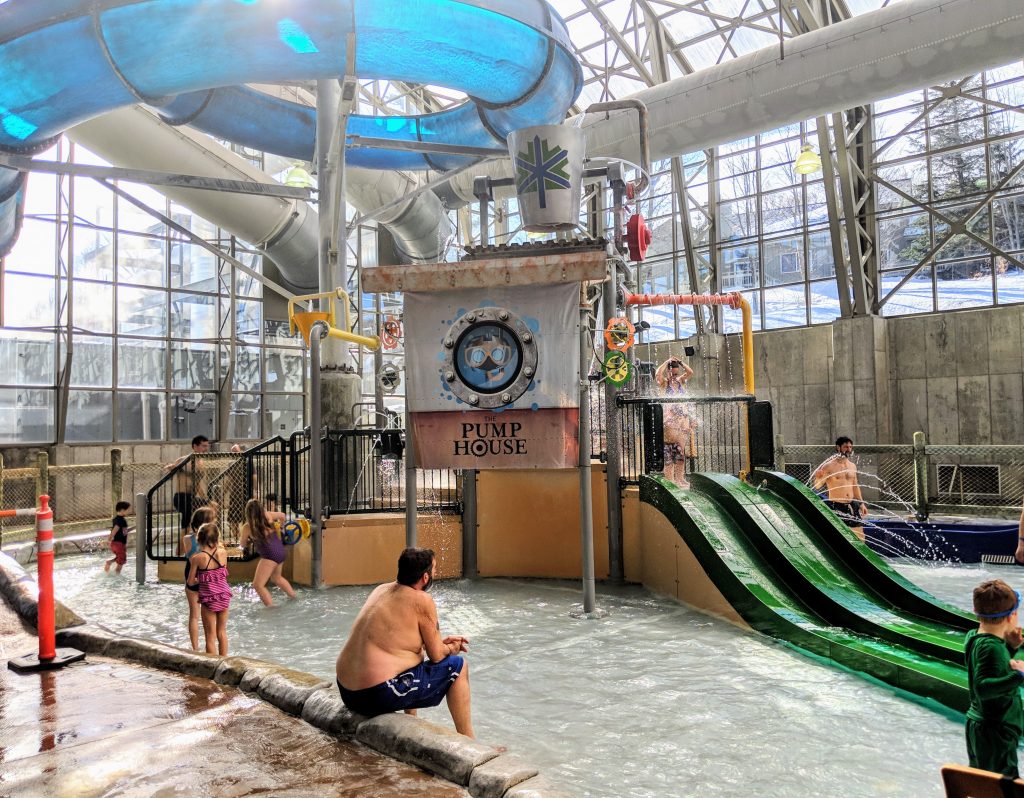 And don’t go thinking this is just a daytime activity. Heck, no! The Pump House is JAMMIN’ at night. Wow. We went to hit up the arcade one night and couldn’t believe the waterpark — think big tunes, bright lights and even a place upstairs to grab a drink and people-watch below.

A quick note: lockers are small and expensive at $14/day (you do get $5 back if you return the key before closing time). Wear your least bulky coats and be ready to store boots above the lockers — if you can reach.

Not one but two arcades await at Jay Peak Resort. The on-demand, free resort shuttle will even get you from one to the other in the same afternoon, if you like. 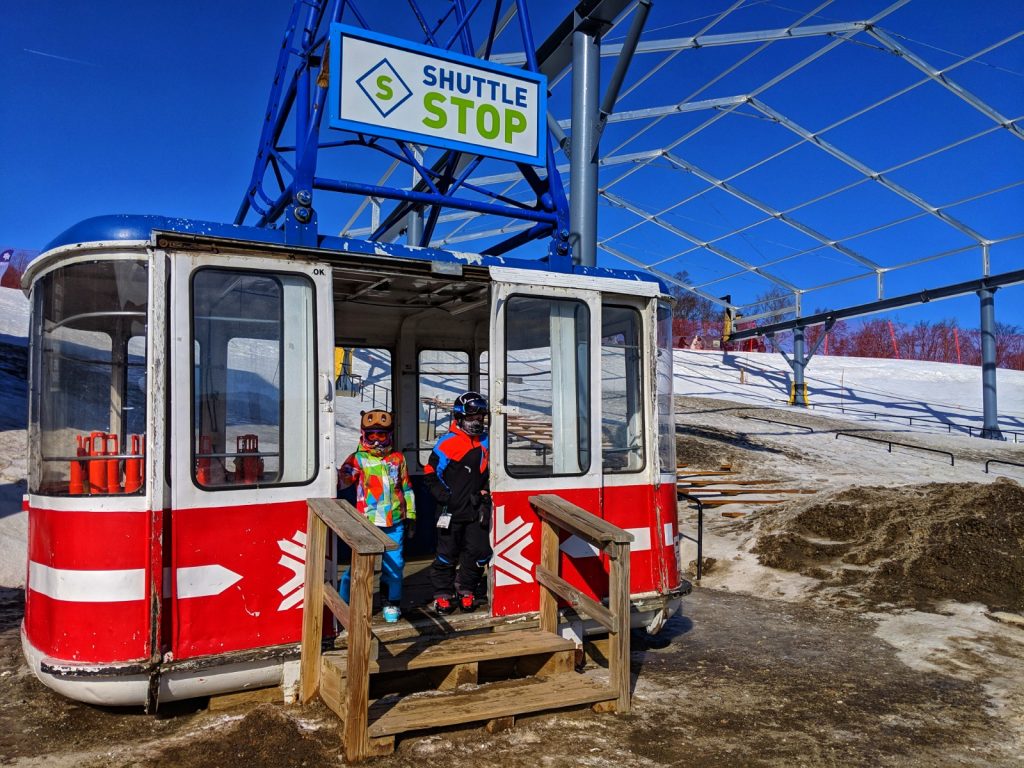 One of the shuttle stops is outfitted with an old tram car!

Typical of most arcades, prepare to come ready to spend. We loaded game cards for each kid with $10 apiece and that lasted for about half an hour. They each came away with about a dollar’s worth of candy at the end — and they were thrilled. 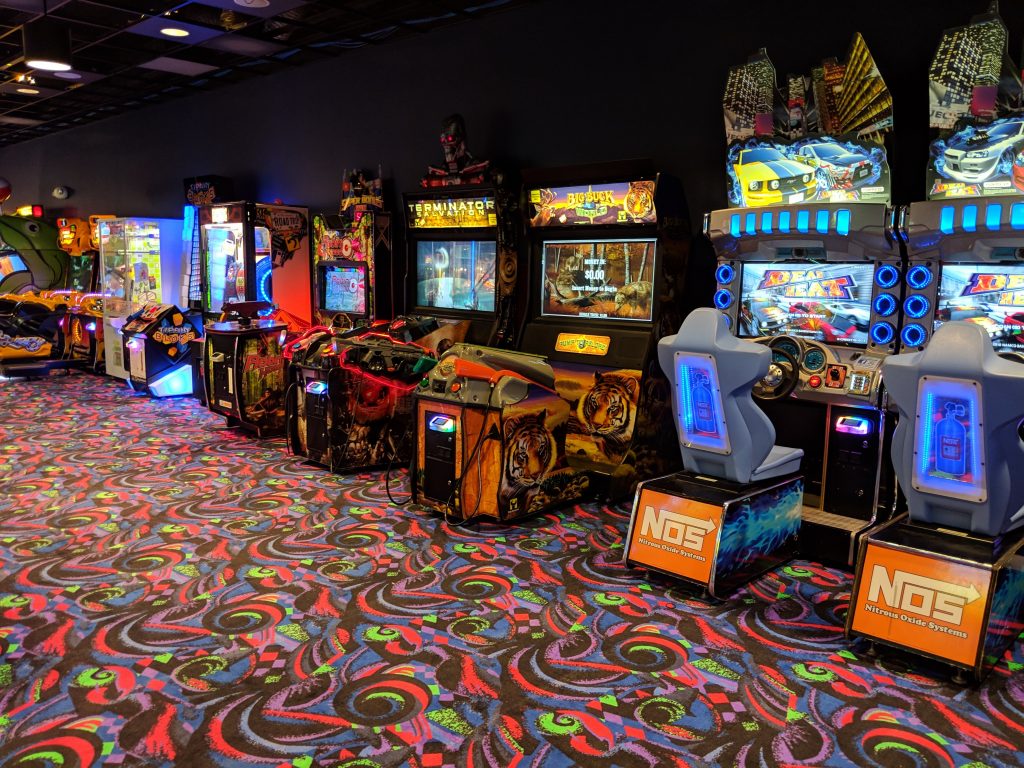 I really wish we’d thought to bring our skates (oh, sure, you can rent them for only $6 but we’re all rather particular about the way our own skates fit). There’s an indoor arena at Jay Peak, so big they host hockey tournaments, with plenty of public skating hours every day of the week. It’s $6 to get in for those age 4+.

The Clips & Reels climbing gym was seriously awesome. For just $10 (after using the $5 off coupon provided in the coupon booklet we received at check-in) plus another $10 to rent some kids’ climbing shoes because we only brought winter boots with us — runners are A-OK if you have them — Miss Q scored a full hour in the climbing gym.

If you or your kids have your heart set on this activity, I strongly suggest booking ahead of time. We had to return three hours later for a spot.

But it was totally worth it.

There are a dozen or so different climbing walls plus a full aerial ropes course, all of which can easily be done during your one-hour time slot. It’s extremely well-organized and well-staffed so there’s little downtime once you get into the climbing zone. 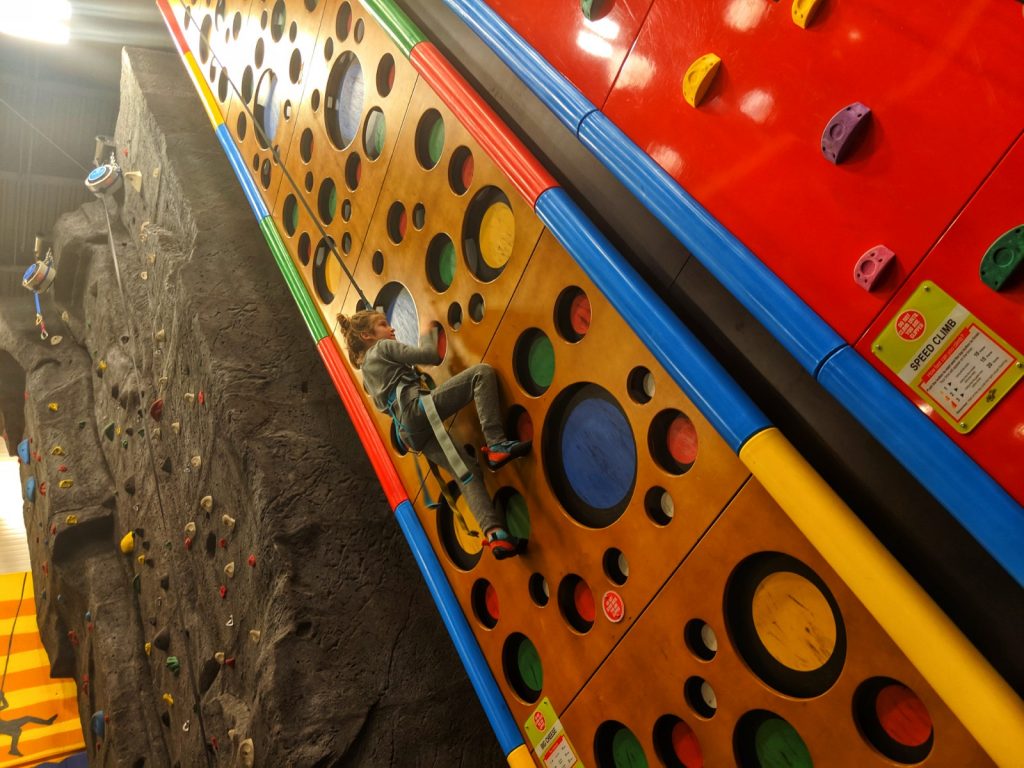 This is just three of the many different climbing walls available in the gym.

Miss Q has tried a few climbing walls before and never made it to the top. For whatever reason, having options other than the standard wall agreed with her, and she made it to the top of a few of them. It was an outstanding experience for her!

We even saw plenty of adults trying to navigate some of the tougher walls and challenges, so don’t go thinking this one is just for the kids.

In the same building as the climbing gym, there’s the Clips & Reels Movie Theater. For $5 per adult and $3 for youth 14 and under, the theatre offers a variety of films — both newer and older runs.

There are usually a couple of showtimes each day; unfortunately, the only day we could make it, it was closed for a private event so I can’t tell you what the sound quality or comfort is like. However, just knowing there was another option for us to keep the kids entertained if they lost interest in the waterpark was enough (spoiler alert: they never tired of the waterpark!).

There’s also the aerial tram. Yeah, yeah — it’s outdoors so maybe it doesn’t belong in an indoor fun post. But it was great and I’d be remiss if I didn’t include it.

Even if skiing or boarding ain’t your thang, if the aerial tram is running during your stay at Jay Peak Resort, you’ve gotta take a ride to the summit. It’s stunning and this tram is unlike any gondola we’ve been on elsewhere. 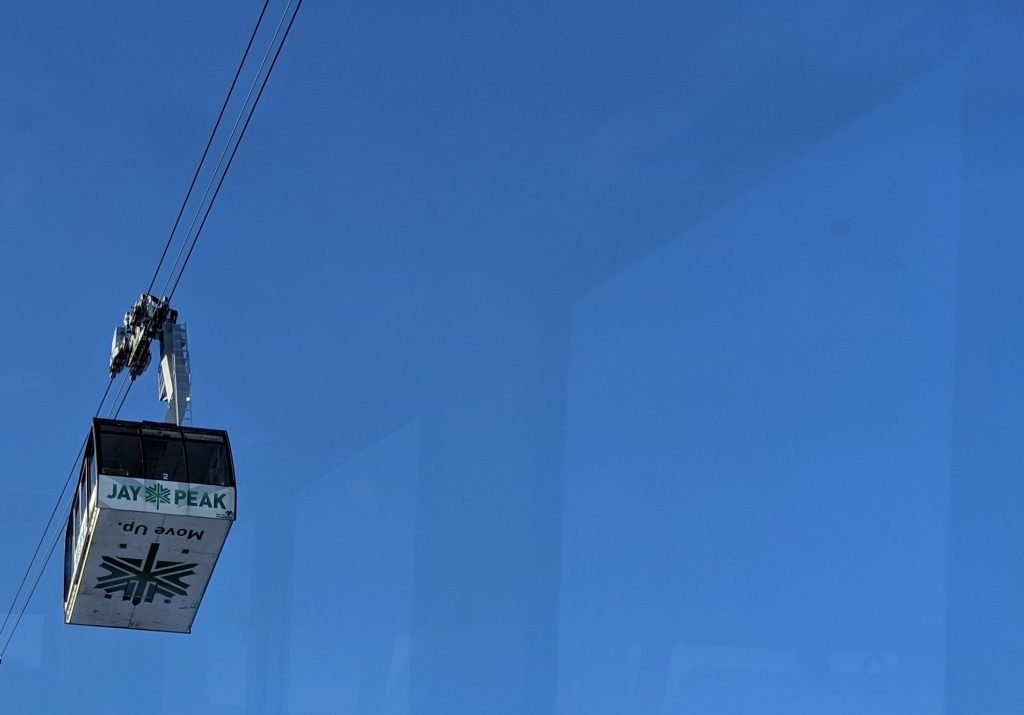 Can you believe that thing holds 40 people?!

Get out, take in the views, and hop right back on the next tram heading back down to base camp. It’s Vermont’s only aerial tram ride and it’s pretty spectacular. 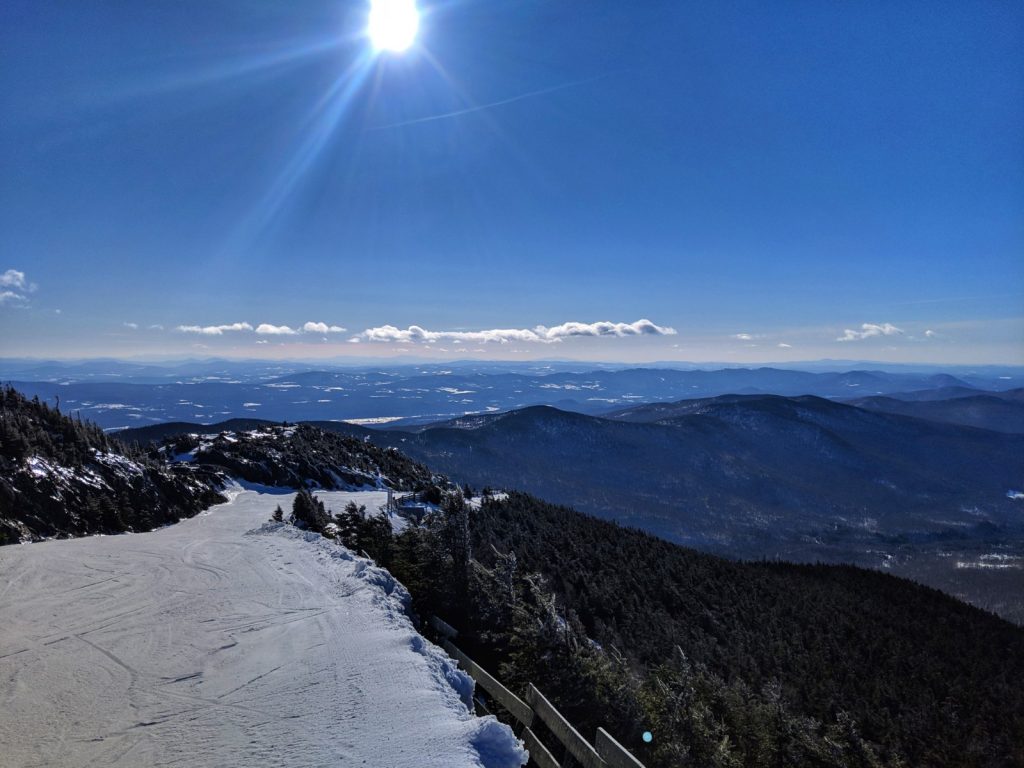 Although we loved being able to dig in to most of Jay Peak’s indoor activities and love that we could weatherproof (and salvage) our ski weekend, I’m not gonna lie: I can’t wait to go back and dive into some of the white stuff the next chance we get.

DISCLAIMER: Jay Peak Resort provided a Stay, Ski & Splash stay for us to facilitate this post. We assumed all other costs and opinions are solely my own.

« Ski in Canada and beyond for one price with the IKON Pass
Best skiing in Lake Placid: Whiteface »