Can a six-month-old sing? Perhaps in her own gibberish-y way. But I’d argue babies can certainly appreciate music from very early on. As someone who loves to sing (in the car, in the shower, on a stage – you name it), it’s important for me to impart a love for music on The K Man and Miss Q. And Big B would prefer that it not be made up entirely of musical theatre tunes.

Barely a day goes by that we don’t turn on the iPod in the kitchen and bop around to ABBA, DanceMix ’94, Indigo Girls or Kings of Leon. I can’t help but smile when I see The K Man bouncing to the beat and swinging his arms all about like a mini-lunatic (he dances like Elaine from Seinfeld). Miss Q insistently points to the iPod whenever she wants to get her groove on. We get our fill of I’m a Little Teapot; Head and Shoulders, Knees and Toes; and Old McDonald, but beyond that, I need to refresh my repertoire every now and then.

We started Kindermusik classes when our first was about eight months old. Pre-crawling, he more or less just sat in my lap for the first few weeks and took in all the stimulation: sing-a-longs; soothing massage to quiet, instrumental music in a darkened room; interaction with instruments; dancing. He became a heck of a crawler during that session and would crawl over to the boom-box or to the instructor, who sang with such a pleasant voice. If I tell you he loved it, I’m simply interpret 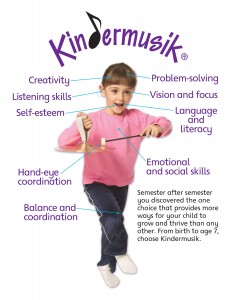 ing his smiles and general contentedness during each 45-minute class for 10 weeks in a row.

Fast forward several months to our next Kindermusik class. By now, The K Man wasn’t just walking – he was running. He’d arrive at class and walk shyly into the room, clutching to a finger belonging to Big B or me, and within three minutes, be tearing around with the other kids. It was a very different session, indeed. No more cuddles during quiet time and no more sitting still for a loving touch, let alone a massage. But I can tell you with much more certainty that he loved it. Sometimes he participated in what the rest of us were doing; sometimes he’d just run circles around all of us, screaming and laughing. He’d check himself out in the mirror (quite proudly), and often clap his hands in pure delight.

Each Kindermusik session is grouped together for different age ranges and features different themes, so you can do several sessions in a row within the same age group and not worry about repeating a class. With sessions lasting eight to 15 weeks, and costing about $130+ per session, you want to know you’re getting your money’s worth.

Integrating different instruments and props is part of every class. Here’s Miss Q enjoying her Our Time Milk & Cookies class:

One of my favourite things about Kindermusik is that at the beginning of every session, the parents are given a take-home kit that includes some visuals or maybe a book based on the class’s theme, a prop (such as a scarf), a small musical instrument (we have an egg-shaker, for example) and a CD with all of the songs you’ll sing throughout the session. Additionally, after each class, the instructor hands out an at-home activity to share with your baby, which helps those of us without a zillion ideas about how to entertain our kids when we’re at home.

It’s pricey. When you compare it to a weekly activity like swimming, for example, which (at least in our neck of the woods) is about $80 for 10 weeks, it’s nearly double the price. That means it’s simply not accessible for some families, which is really too bad because the benefits of music on child development are staggering – from concentration and co-ordination to strengthening areas of the brain that facilitate reading and math skills.

Times and locations outside of major cities can be pretty limited. When we lived in the big city, there were numerous classes to choose from that fit our schedule; however, here in suburbia, there are two instructors within a 20-minute drive of our house and neither offer class times that work with Miss Q’s naptimes. Not that I’m looking forward to the end of naps (oh, hells no), but I am looking forward to experiencing Kindermusik with my daughter.