La Jolla wasn’t even on my radar. Heck, San Diego wasn’t really on my radar either — until Big B had a free hotel room thanks to a conference and I decided to tag along, leaving the kids at home.

So began the research. The hours upon hours of Googling “what to do in San Diego” and “how to get around San Diego.”

These two queries alone brought me to the Old Town Trolley’s La Jolla and San Diego Beaches Tour, which promised “a relaxing, informative and fun-filled day-tripper tour through some of the most popular beach spots in Southern California.” Other than that, I really knew very little about what to expect or see along the tour and was mostly using it as a way to avoid public transportation.

Aside from starting out with a fabulous pitstop atop Mount Soledad, offering panoramic views of San Diego from 866 feet above sea level, the tour — and our guide, Philip — was excellent. I took the earliest trolley, which put me in La Jolla around 11:15 a.m. The last pick-up time was 3:15 p.m. and I figured that would be more than enough time to explore La Jolla.

Well, I had to run to catch that last trolley. Uphill. I do not recommend this portion of the self-guided tour. Give yourself more than just eight minutes to hoof it back from the La Jolla Cave area if you don’t want to give yourself a coronary en route. Leave yourself a solid 20-minutes and you can walk back like a normal human being.

What I found in La Jolla was magical. And smelly.

From the minute the trolley bus reached the seawall, the stench was putrid. Because of…sea lions! (Incidentally, I overheard someone call them seals and, not being an animal expert of any kind, assumed it was correct. It was not. Seals do not have ear flaps. These guys do.)

So, picture it: hundreds and hundreds of sea lions perched on rocks and playing in the ocean. You’ll get used to the smell, and it’s totally worth sucking it up because these wild sea lions are within arm’s reach and you can just hang out with them all day if you like. Only, don’t actually touch them; they’re marine-protected animals and you’ll get fined. So just enjoy being near them, and do heed their warning barks and back off if they think you’re encroaching.

From teeny-tiny baby sea lions who looked mere days old to playful adolescents to a big, old grumpy guy who seemed angry with just about anyone — on foot or flipper — they were everywhere: 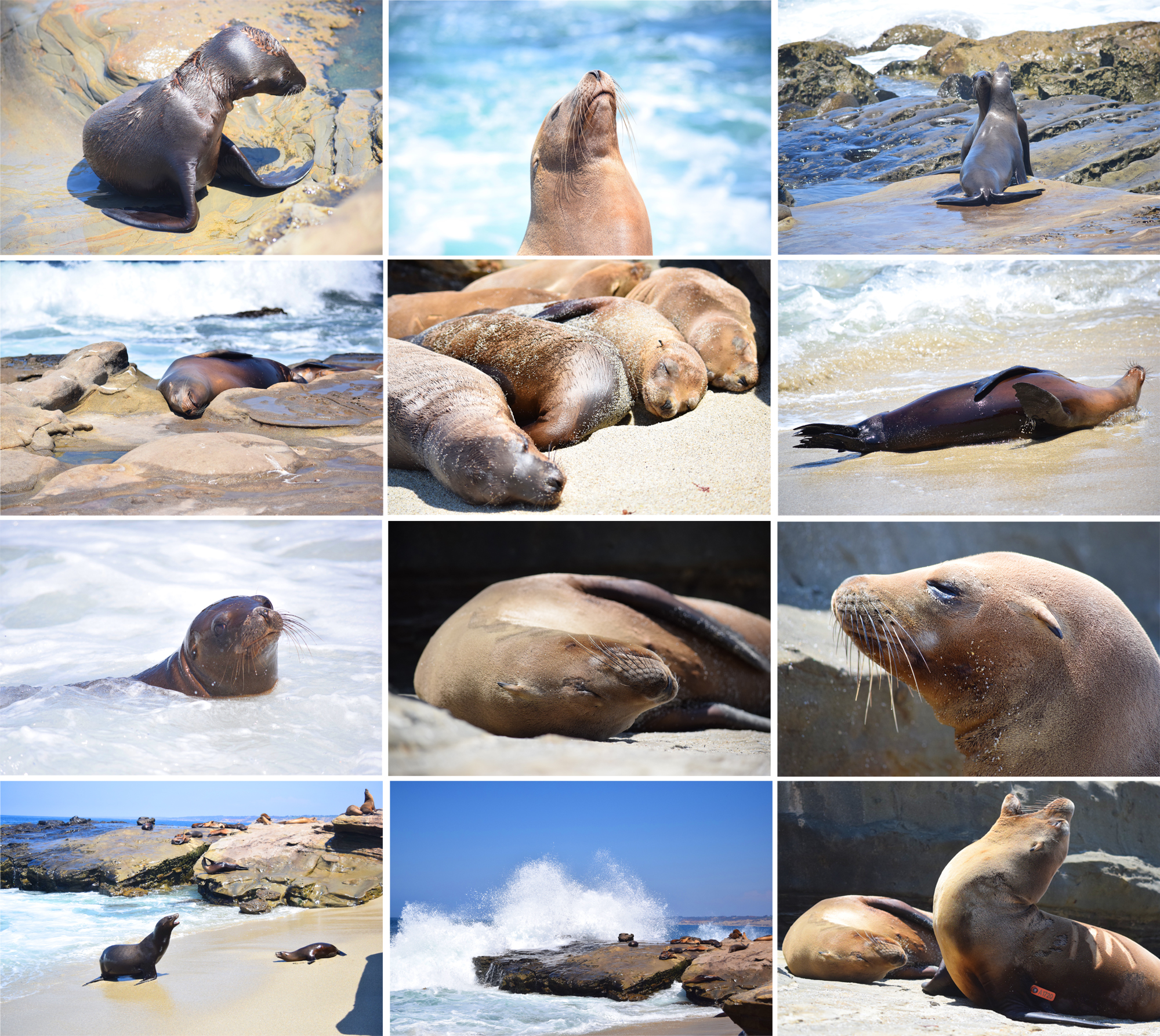 I sat there for almost two hours. Just watching. Mesmerized.

I could see waves crashing and kayakers making their way to a cliff not far from where I sat with the sea lions, so off I went… 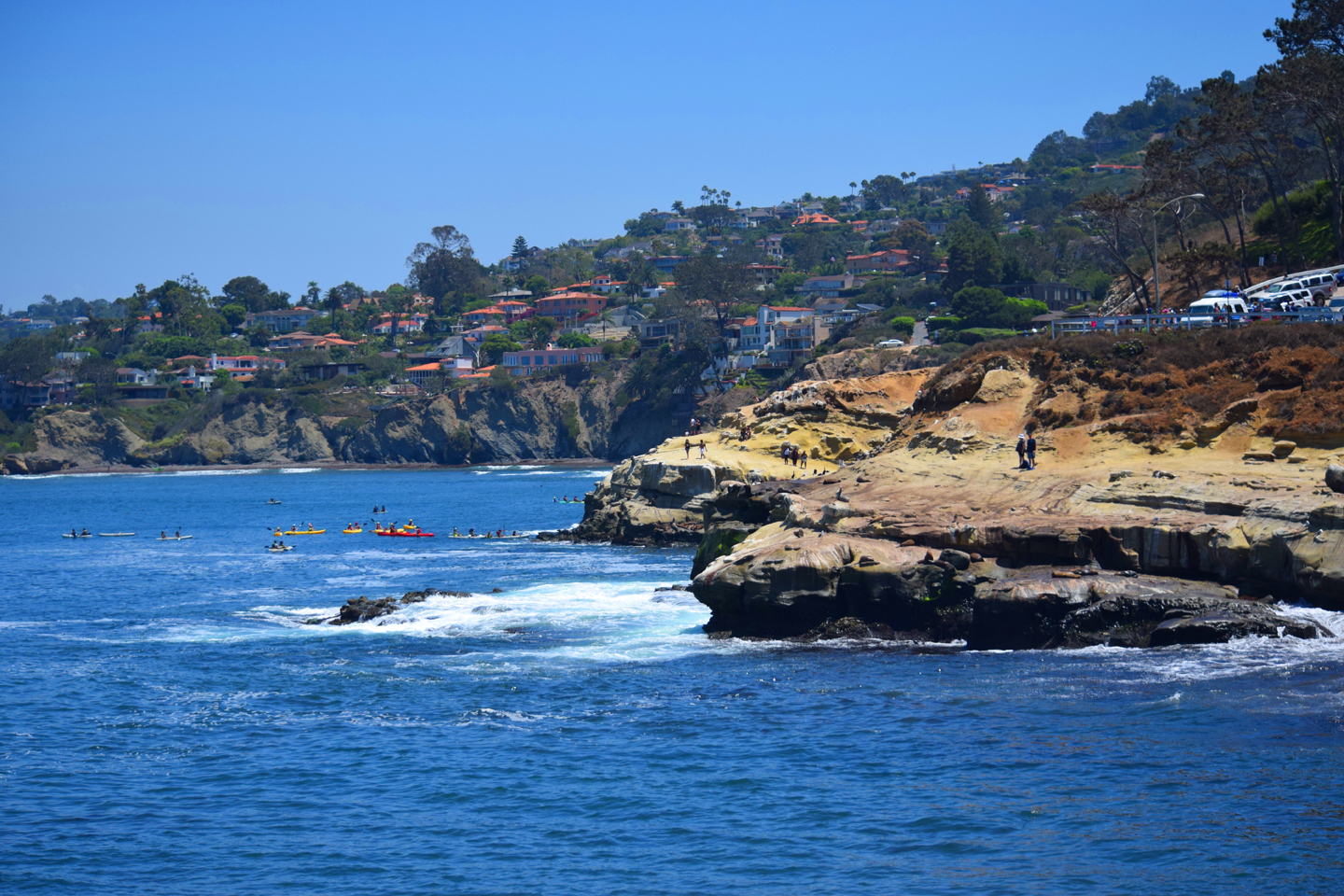 Then I wandered over to The Cave Store, which I noticed on the trolley ride sold seashells. I wanted to grab some for my kids to bring them a little piece of La Jolla. What I hadn’t noticed on my ride was this:

It was a huge cave, accessed by The Cave Store. But it was a long way down from where I stood and I was keenly aware of my grumbling belly. I bought a few shells and walked across the street to have lunch at Crab Catcher, which has a beautiful terrace with an oceanview — looking down on that very cave. What a view.

Getting lost in the view was easy, and I nearly decided to take a cab back downtown to avoid the race for the last trolley. But I’m so glad I made it and finished off the tour, or I never would have seen Pacific Beach.

And, wow. Waves crashing, surfers everywhere — I immediately texted Big B and told him our plans for later that week had to change. We were coming back to Pacific Beach. And we did! Here’s why:

It was the only time we had together in San Diego, and it was an afternoon to remember. And it was all thanks to that return trolley ride.

DISCLAIMER: I received a one-day, hop-on and -off Old Town Trolley ticket for the La Jolla and SD Beaches Tour. All opinions are my own…as usual.