The LeapPad2 Explorer is featured in Part III of my 2012 gift guide.

April is mom to a very happy four-year-old boy, Cameron. She works full-time outside the home, and Cameron started full-time JK this past September.  The two are an active pair between hockey, soccer and baseball.  April runs a fitness bootcamp on the side during the summer months and online during the winter months. Somehow, she also enjoys downtime at home (when, April – WHEN?!).

Last year we contemplated the purchase of adult tablet or a children’s version tablet/system for Christmas.  There were pros and cons to both. For an adult-type tablet, we planned on getting a cheaper non-brand name version. Connect at home only and you don’t have to purchase games or apps as there are a ton on the internet for my son’s age group; almost every product or television show geared to kids has an internet related game.

The danger is that even with parental controls, you can click a link that takes you somewhere not so kid-friendly (they can only filter so much). We’d constantly need to sit and watch – he has quite a little inquiring mind! Even watching a You Tube video of popular Treehouse shows, you find posts that start off harmless but people with too much time on their hands have gone and inserted non-appropriate material partway through.

I researched this part well and it scared me enough to go the route of the children’s tablet.  The other downside with an adult tablet was that Cameron couldn’t bring it along for travel unless we purchased a mobile internet stick or used pricey data connections from our cellphones.

I ultimately didn’t do a tonne of research on the InnoTab because Leapster was already a brand I trusted. That, and Cameron loves the Leapster Learning videos, so it seemed natural to go in that direction. Cameron became the proud new owner of his own Leapster Explorer, and several games over the last year – and loved it!

Technology is ever-changing, of course, and this trickles down into kids’ systems, too. It seems that the day we buy one system, it’s already outdated by the next best thing. New this year is the LeapPad2 Explorer. We were really excited to test this product for Mommy Gearest’s gift guides and compare the two systems. 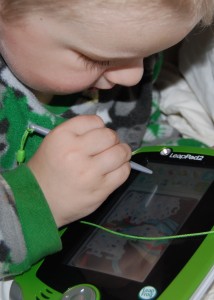 Cameron doing his thing on the LeapPad2.

The games for the Explorer and the first-generation LeapPad are compatible, but are not with Leapster’s previous handheld gaming systems (Leapster and Leapster2). In the past, this meant no buying used games from swap sites; the systems were still both so new no one was getting rid of them. We bought all of our games for the Explorer new. However, I’m happy to report that the LeapPad2 is compatible with all of the Explorer games we already own, so we had several to use with this new system. There are some new games that are only compatible with LeapPad1 or 2, designed to make use of the bigger screen (yes, another bonus; it’s much bigger than the previous versions!), but this is easily identified on the LeapFrog app page.

The age range of the tablet is another plus, advertised as suitable for three to nine years old. There are a variety of games you can get for different age groups. Although most I found indicated they were for four to seven year olds, this is still a huge age range for a kid’s item. I find we often open toys right out of the box when new, they get played with a few times and then we go back to the favourites. This will be played with (at the frequency you allow – we do monitor “gaming” time) for several years. The durability means it will last these years, too. If you upgrade, there will always be a child out there who would be thankful for any older version, so resale should be easy enough.

Games are only geared to kids; no getting into internet trouble here! Games “trick” kids into thinking they’re just playing but they all have a learning aspect. For example, in Penguins of Madagascar you get to fight rats but every level requires you to answer math questions and problems to unlock the next door. My four year old thinks it’s all fun and this is definitely one of his favourite games.

Another strong point is the LeapPad2’s availability of games and applications. You’ll find everything from eBooks, flash cards, games, music, learning videos to options available in different languages, which all come in our children’s favourite characters to keep them interested. Toy Story, Finding Nemo, Sponge Bob, Dora, The Magic School Bus, Disney Princesses, and the list goes on. There are also more inexpensive game options without the big-name branding. The best thing is that it comes pre-loaded with five or six applications that your child can already do between opening the box and registering online. 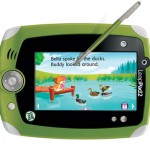 What would normally be my disappointment about these systems has been solved for the LeapPad2. Batteries. You go through so many batteries with these things! However, some genius this time around thought it through and for about $40 you can get a rechargeable docking station and adaptor kit. So, no going through mass amounts of batteries that seem to need to be changed every time the kid wants to play. Better for the budget (I bet I spent at least $40 this past year in batteries for the Explorer) and the environment, too.

Buying games and apps for the LeapPad2 Explorer can add up. Although there are cheaper options and more selection if you buy online than in major department stores, the cost definitely doesn’t end when you bring the LeapPad2 home. You can spend from $5 to $30 on a single application or game. This, on top of the initial system purchase plus the rechargeable kit (a must!) will have you hearing “ka-ching!”

I like that the system has a front and back camera, and video camera, so kids can take their own pictures and videos, but the resolution is really poor. There won’t be any keepsake pictures taken with the LeapPad2.