When we decided to move from a California king-sized mattress to a standard king Casper Mattress, we took the opportunity to redo our master bedroom. But I didn’t want to spend upwards of $10,000 — which isn’t even a little bit hard to do these days to totally outfit a single room from start to finish. Our master bedroom makeover on a budget started with a bargain-priced headboard, involved repurposing furniture from elsewhere in our home, two months of scouring store shelves for décor and finding the perfect paint to create the canvas of our zen dreams.

My intention was to spend no more than $2,500. After all, we like to travel a lot and travel ain’t cheap. We have monetary priorities!

Let me walk you through our budget master bedroom makeover, and show you some before and after pics. Because although this transformation looks like a million bucks, it ultimately cost about $2,300 (mattress aside). And that’s not counting the $300 I made selling our old bedroom furniture.

Consulting one of my best friends on the planet, design genius Erika Veh, pretty much every step of the way, we started with the vision: I wanted an upscale, modern beach hotel vibe. A retreat in my otherwise chaotic home. I also wanted to move my office from the dungeon (our dimly lit rec room) to our bedroom to take advantage of the incredible natural light we get up there — especially in the summer when I can open our balcony door thanks to our Phantom Screen.

Step one: headboard. Erika suggested we visit the Restoration Hardware outlet. I wish we’d visited with my husband’s truck because you have to be ready to take action if you find something you like. And I found it within five minutes of walking through the doors; it’s a lightly stained hardwood shutter headboard. There were no side rails and it had a ding in it that I was concerned would drive me crazy, but it was a dead ringer for beachy. And it was marked down from nearly $4,000 to $700. A salesperson came by to let us know that everything in the store was another 50 per cent off the marked price. So after some consideration and a call to a local moving company, I paid $350 for my dream headboard and another $200 to ship it home that day.

Next up was the paint. I originally envisioned a white headboard, which would have worked with our existing grey walls. But with an almost teak-coloured headboard, the grey was all wrong. It also never helped the room feel as bright as I knew it could. So we agreed to lift the walls and make them a white tone. I partnered with the The Home Depot in this area, but even going with what I consider the best paint — BEHR Premium Plus Ultra Stain-Blocking Paint & Primer in One, which we’ve used in several rooms throughout our home — this piece of the investment would have only cost $110 after using a little less than two cans.

I took home about 12 “white” swatches and taped them to every wall in our bedroom, looking at them at various times of day as the sun cast different light. I finally settled on Nano White, which has a gallery white feeling without the stark chill thanks to a somewhat creamy undertone. As you see, once we painted, our room seemingly doubled in size: 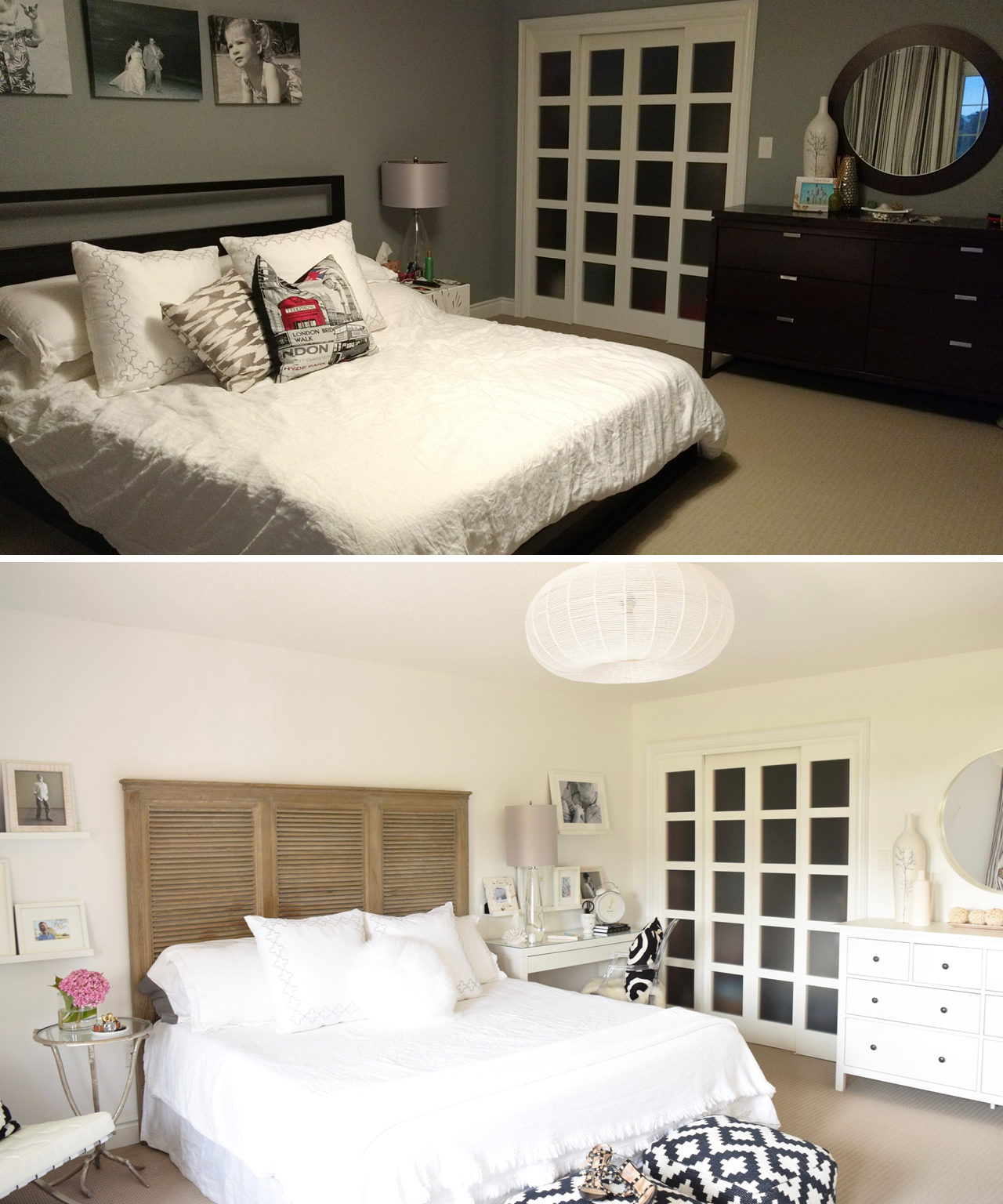 Part of our before-and-after master bedroom makeover magic — in large part due to fresh paint from The Home Depot Canada.

There was only one piece of furniture in our existing room that I wanted to keep, and that was our white leather Barcelona chair, which you can see off to the left in the picture above. Other than that, we needed everything and this part was where we could have easily blown our budget. It isn’t hard to find a even the smallest dresser costing well over a thousand dollars. And I needed at least two dressers, a desk and a nightstand.

I hadn’t been to IKEA in years for furniture — seven to be precise, when we moved into our current home and we needed a dresser for The K Man. His all-wood Hemnes tallboy dresser had held up so well over the years, I thought I’d look online to see if there was something similar in white. And there they was: two white dressers that would fit perfectly in our space. I had Big B pick up the eight-drawer dresser and three-drawer chest. He wasn’t exactly thrilled to put together IKEA furniture, but with the pair costing less than $500 together, it was worth the effort. And then I added a $99 mirror to his IKEA shopping list: 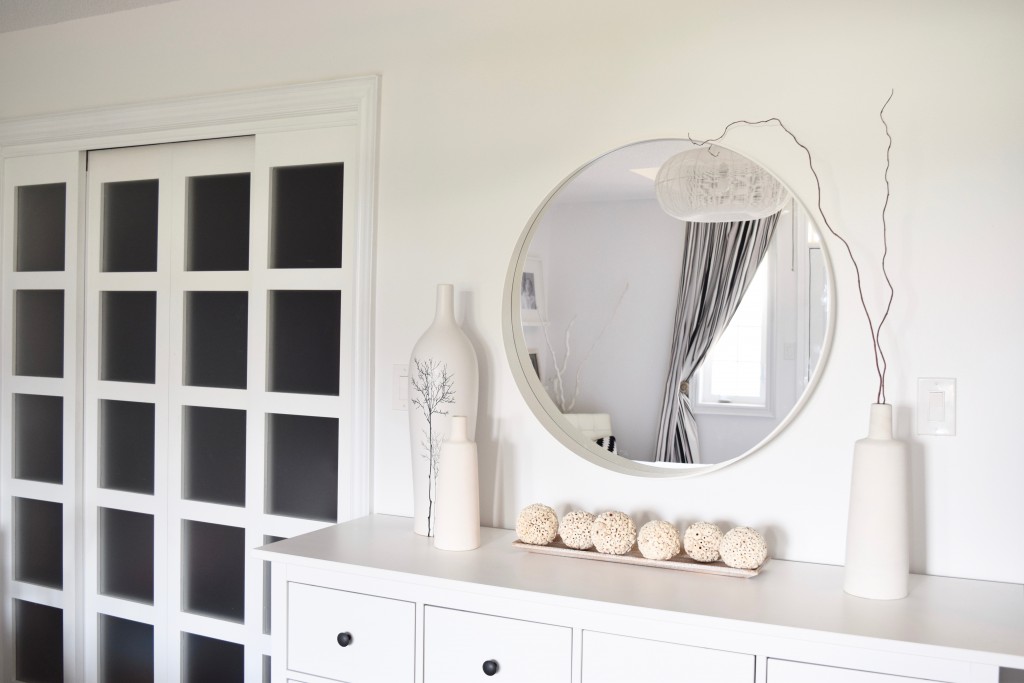 A glimpse of our eight-drawer Hemnes dresser, plus an IKEA mirror above it.

With the biggest pieces in and the room taking shape, we decided to save ourselves hundreds of dollars and stick with the curtains we’d had custom made when we moved in. They were working with the overall look and provided some additional interest in the room now that it was more minimalist. We moved a side table from our living room that never really worked up and it became the perfect nightstand beside the Barcelona chair. Reusing and repurposing furniture definitely helped us stay on budget.

But the desk continued to elude me. Our master bedroom really isn’t all that big at about 14’x17′, and the desk needed to be small enough that it wouldn’t look out of place as a nightstand on one side of the bed, but big enough to hold a lamp and some styling pieces but also accommodate my laptop when I needed to work without having to disrupt all the pretty things. I scoured Google Images and Pinterest for weeks looking for hybrid nightstand-desk ideas. One style kept appearing that always caught my eye.

I sent Big B back to IKEA, this time to pick up the MALM Dressing Table. At only $169, it not only had the right look and dimensions, but it had the added benefit of a glass top. I have wiped away so much condensation from my glasses of water, which surely would have destroyed wood by now, and it protects the table underneath from scratches that would certainly be there thanks to my laptop. 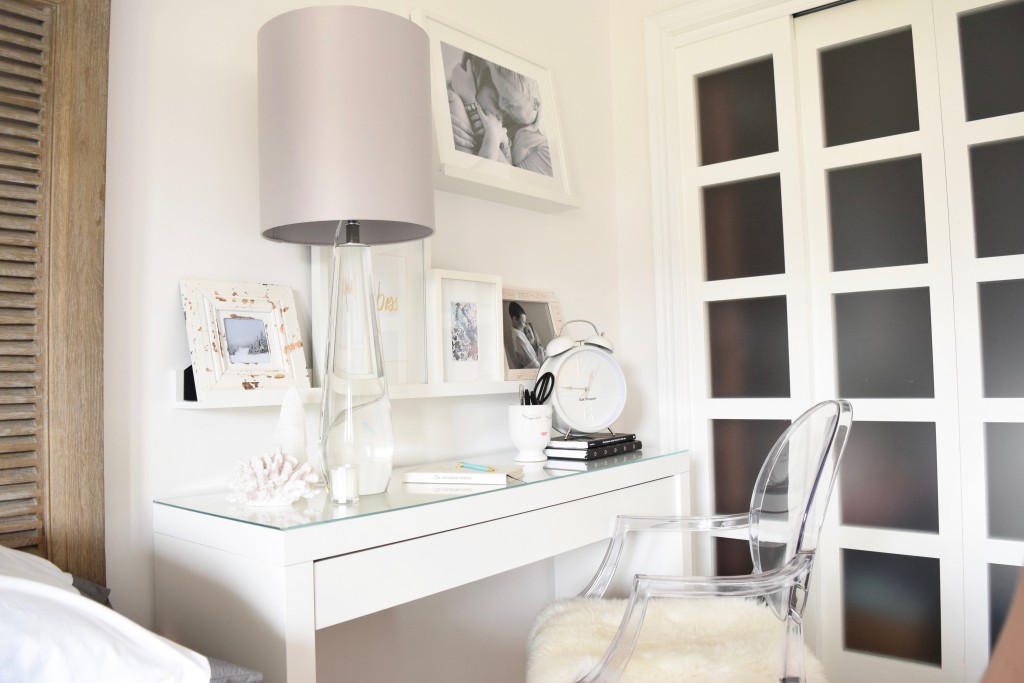 My gorgeous desk-nightstand, where I am inspired to work basking in natural light.

Helping the desk appear nightstand-ish is a faux Ghost chair that I found (brand new) on Kijiji through a local seller for $105. I topped the desk with some books and a clock I already owned, and used a small sheepskin rug on the Ghost chair that previously adorned my Barcelona chair. It all worked.

I also kept my white linen bedding set and four accent pillows, which were now dispersed throughout the room. I bought only one new Mongolian goat hair pillow for my bed, which was $60. Despite how nice it is, I wanted to conceal our new Casper bedframe so we could take advantage of under-bed storage space down the road. I found a wonderful Canadian artisan on Etsy, NikkiDesigns, who custom makes bed skirts (among other things) and we were able to match her linen with the linen I already owned. About $200 later, we had a cohesive bedding set. Adding a $99 light fixture from HomeSense and a couple of poufs from Urban Barn really started to tie the whole look together. 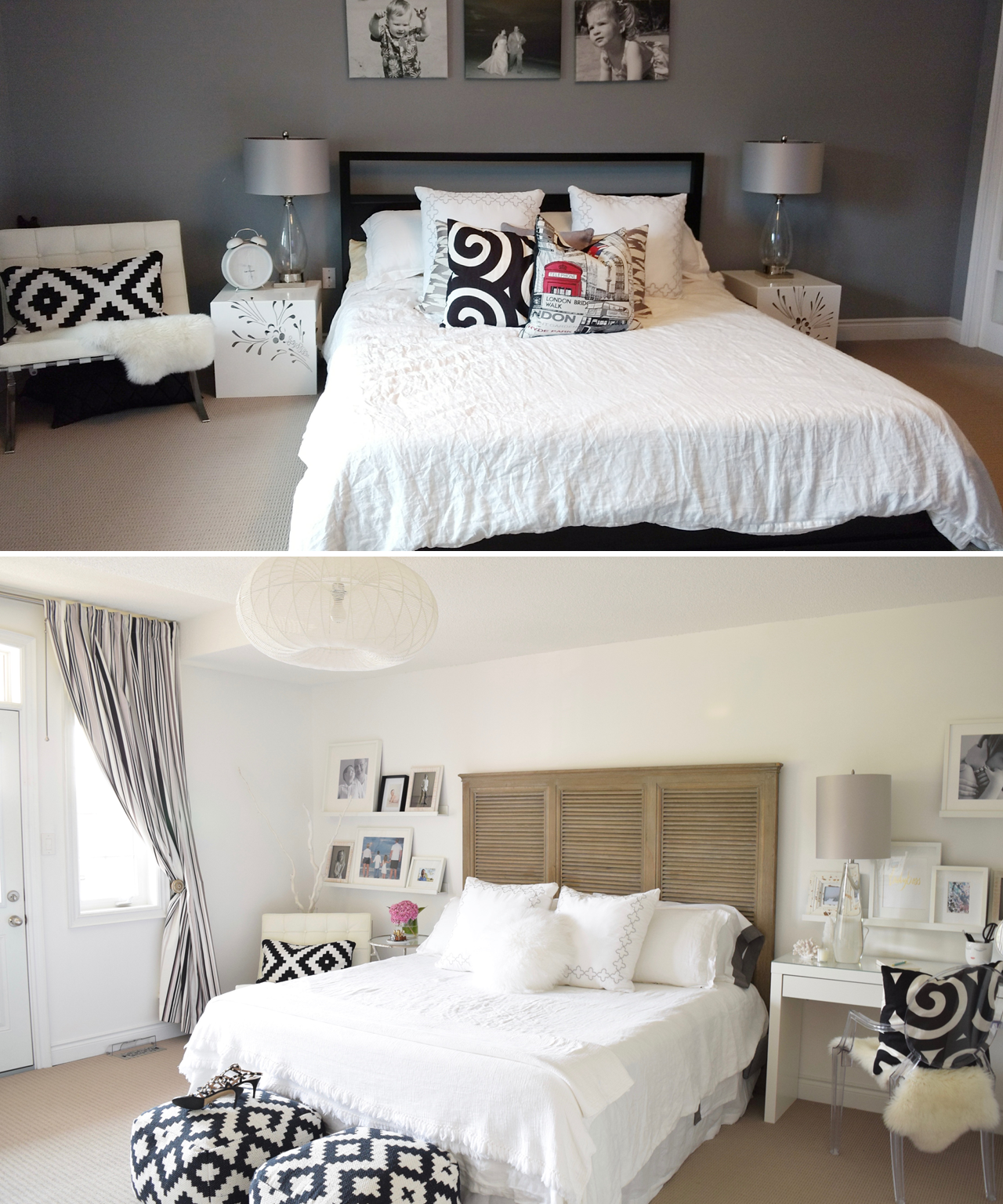 Another before and after comparison from another angle in our room, showing off new and old bedding, poufs, plus our $99 ceiling light.

Now it was time to jujj. Sjooj? OK, I finally looked up how to spell this word, and the Urban Dictionary declares it is “tszuj.” As in, the room needed some serious tszujing. And while I’d consulted Erika every time I decided on a piece of furniture, the choices were very much mine and she merely helped me confirm my instincts were right. But the tszujing is not my thing. It’s like I don’t know how to start or when to stop. The best tszujing is all in the editing, and Erika has a special knack for this. She nabbed a couple of candles and a really cute pen holder somewhere in Toronto; they’re gifts so I can’t tell you where or how much (sorry). And we talked at length about what could go where and what else I needed to look for, and with what to adorn my very white walls.

Over the years, I’d amassed quite a collection of white frames from HomeSense that were sitting in my closet. I just knew one day I’d use them in my master bedroom. But after painstakingly creating a gallery wall in our hallway, I knew Big B was headed back one last time to IKEA for picture ledges. There was no way I was going to try to align frames just so again. It’s the devil’s work, I tell you.

Four picture ledges and 12 frames later (with photos all printed on the cheap at Costco and Walmart), it was like our impersonal hotel-worthy room was now ours. It was us and it felt right. 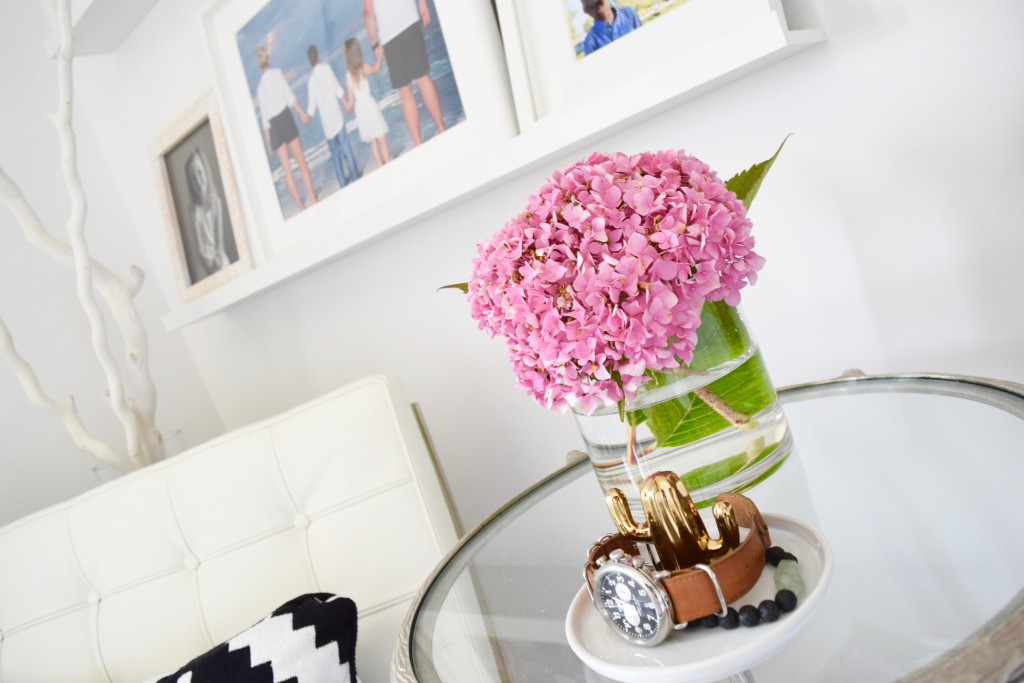 Picture ledges from IKEA, a cheap trinket tray and repurposed items from throughout our house helped us stay on budget.

I mentioned HomeSense a couple paragraphs up, and that’s really where the rest of the magic happened. So many pieces of décor I reused from our old bedroom or bought for the new one — from those frames and that $60 pillow on my bed to some faux coral, vases, sticks, trays, my clock, a dish for Big B’s watch and wedding band at night — came from HomeSense. Everything but the lamp rang it at $35 or less apiece, and it was all about the thrill of the find.

In every room, I believe you ought to have one good splurge. And in our room, it was the lamp on my desk (which you can see in many of the photos if you scroll up). Sure, I already had one that I could have used. It was fine. But when I saw this one, I knew it was so much better than fine. In the grand scheme of purchases, $300 isn’t a lot. But when you consider that my eight-drawer dresser was $300 and my headboard was only a bit more, $300 for a lamp is most certainly a splurge. But I earned it by being carefully frugal in every other aspect of this master bedroom makeover. And, my goodness, I don’t regret it a bit.

I am in love with this room. It’s every bit the beach hotel look I wanted — with a global, modern twist — and it’s definitely a bright, airy retreat. Working in here is about a kajillion times more inspiring. And I look around and feel so proud that I was able to make it happen for even less than I’d originally budgeted.

DISCLAIMER: The only sponsored components of our master bedroom makeover were the Casper pieces, as identified in its own post, and the paint that The Home Depot Canada generously provided.

« Your kids can do with Kandoo: potty training, back-to-school and more
Casper Mattress review »