If you’re looking for a movie review of Mia & The White Lion from both a parent’s and kid’s perspective, you’ve come to the right place. We were invited to an advanced screening before the film opens nationwide on Friday, April 12, and went with five adults and seven children!

I’ve heard that the sun smiles differently upon South Africa. Perhaps that’s because it’s the continent’s southernmost country, or maybe it’s because it seems like a far-off dreamscape — a natural wonder that some of the world’s most awe-inspiring animals call home. This is the kind of movie you’ll want to see on the big screen thanks to its breathtaking scenery.

Mia & The White Lion captures this paradise beautifully. But it also exposes the reality of some game parks and animal hunting — illustrating that even legal practises can have a dark underbelly.

Without offering any spoilers, the gist of the story is that 11-year-old Mia — who grew up in London, England, as the youngest child of South African and French parents — has unwillingly moved back to her deceased grandfather’s lion reserve. She misses her old life and doesn’t have friends at her new school. 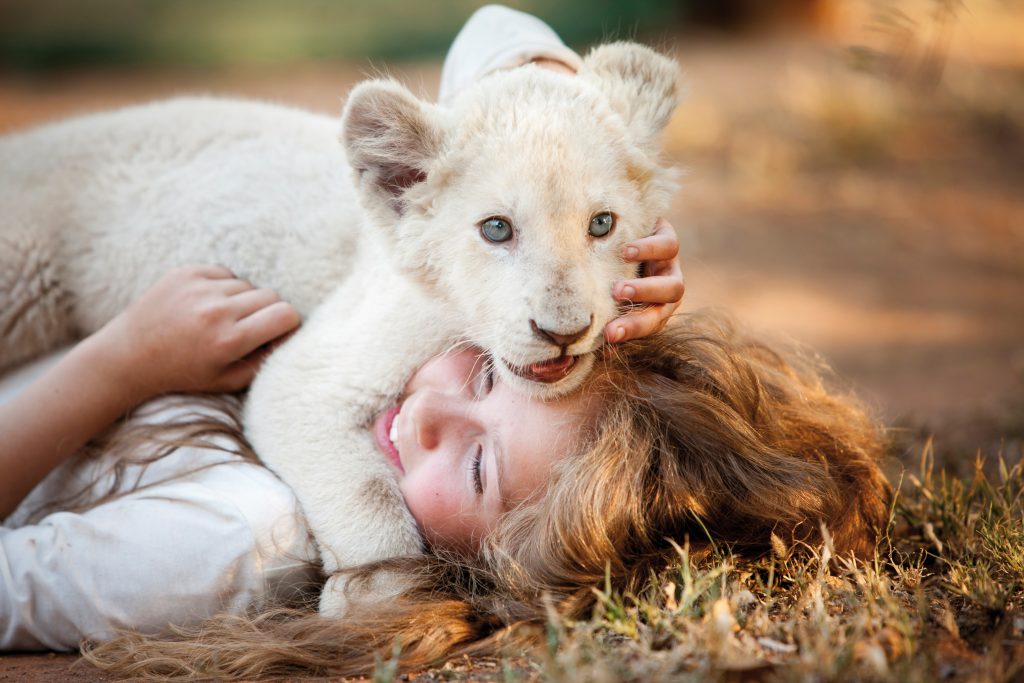 Her unlikely new best friend takes shape in the form of Charlie, a rare white lion cub who promises to be a huge draw at the reserve, which Mia’s father has vowed will operate in favour of lion preservation. But by the time Mia turns 14, Charlie is an enormous white lion — no longer a suitable pet. 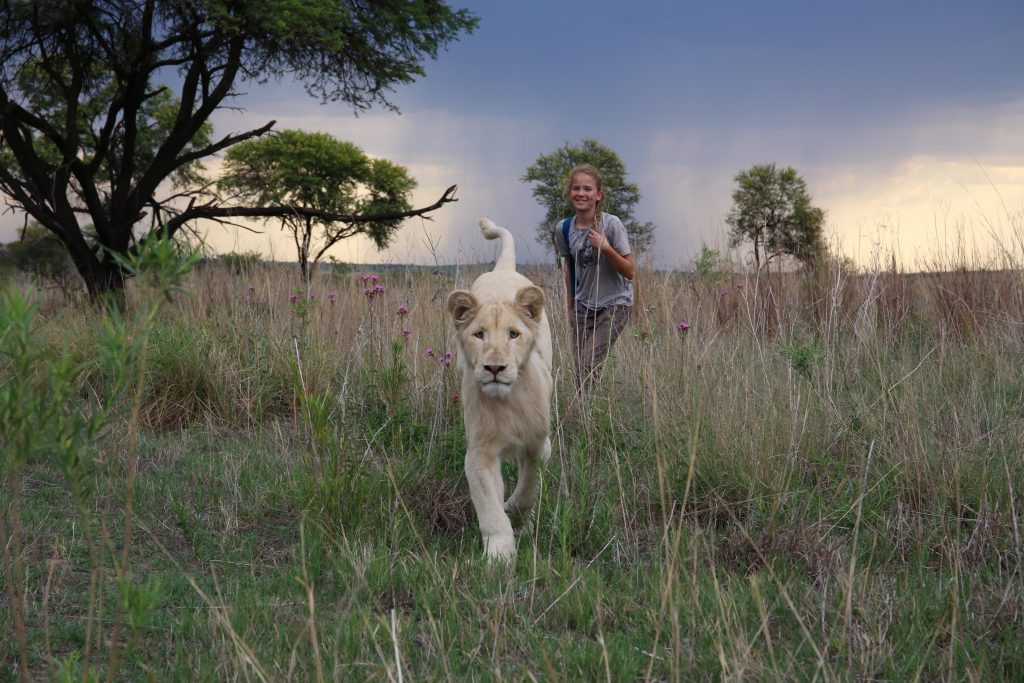 After Charlie behaves like the adult lion he is, Mia’s father decides he needs to keep the family safe and makes plans to sell the lion to the highest bidder. As the story progresses, Mia learns the horrifying truth: her father has sold lions to trophy hunters. Charlie’s fate is in her hands and the rest of the movie centres around her brave trek across the savanna to get him to safety. 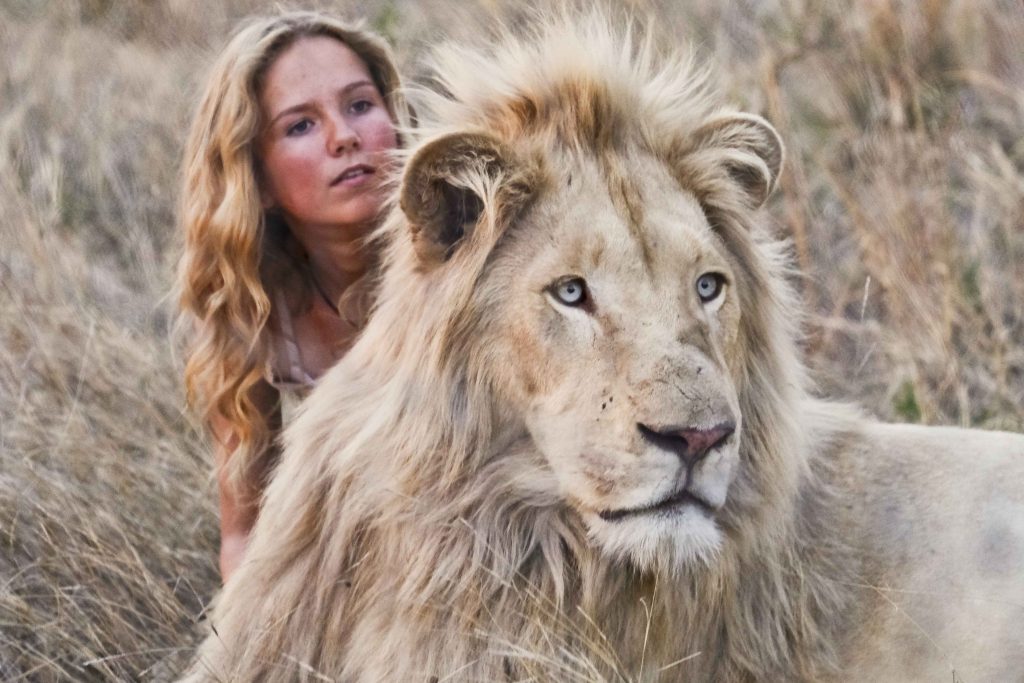 What I found absolutely remarkable about this film is its dedication to authenticity. Instead of having a tween actress and a different teen actress play Mia’s role, and using a variety of lions of varying ages to fast-forward Charlie’s growth, French director Gilles De Maistre chose to shoot Mia & The White Lion during a real three-year period. This allowed the movie’s human and animal stars to develop genuine bonds and age in real time.

Filmed at the Welgedacht Reserve in South Africa, De Maistre does a stunning job of balancing the beauty of South Africa’s landscape with the ugly threat lions and other big game face in a country that, on the whole, isn’t devoted to animal conservation.

As a parent watching Mia & The White Lion, I was really happy that 99 per cent of the film didn’t have any foul language (I did detect two quick “S” words three-quarters of the way through, but thankfully the South African accent camouflaged it pretty well). While some violence is implied, most of it doesn’t occur on-screen and none of the kids in our group — ages 2 through 10 — were frightened at any point.

By the end of the movie, most of us were in tears — kids included. If you have sensitive kids, not to worry, there’s a happy ending.

Ultimately, Mia & The White Lion tells an incredible story of love and courage and the importance of standing up for what you believe in. There was also a great message about trusting people to help you in your darkest moments. It’s extremely family-friendly and will provoke some important conversations.

The K Man: “It was very emotional, but very good. I thought it was a great movie to go watch with your family because it’s got a nice story line and it teaches you about the kind of danger lions are facing.”

Miss Q: “It’s all about friendship, and shows that friendships are very powerful — the most powerful thing of all. It taught me that you can become friends with someone who’s different. The story makes me want to go to Africa and help lions.”

Don’t wait for the DVD. Buy tickets to see Mia & The White Lion as of April 12, 2019 to share the experience with your children.

DISCLAIMER: The film’s distributor, Ledafilms Entertainment Group, compensated me for this post. However, every bit of emotion and my recommendation to see this movie is real. We LOVED this movie and we know you will, too.