I can still pinpoint the exact moment I shared my breastfeeding fears out loud. I was in a prenatal yoga class, eight months pregnant with The K Man, and we were sharing hopes and fears.

I knew I wanted to breastfeed, but I’d been having a recurring nightmare that I simply couldn’t.

And then the nightmare came true.

In June 2008, I gave birth to a boy, perfect in every way. He was latched and nursing within minutes of being born. Even in that new-mother haze, I remember thinking: “Wow…it isn’t nearly as hard as other women make it out to be. It doesn’t even hurt.” I lived in that bliss for the next 24 hours.

The nurses came to check on us every couple of hours and they’d often find me already nursing again, and everyone seemed impressed that this brand new baby and first-time mom had this whole breastfeeding thing worked out already. He peed and pooped right on schedule and we were invited to stay a second night or go home — our choice since everything was going so swimmingly.

Faced with another night in a shared hospital room, we chose to head home with our bundle of joy.

And then it all fell apart.

The content baby who was nursing so beautifully in his first day of life, who had barely cried, suddenly seemed frustrated and dissatisfied at my breast. He screamed. Without a bottle, it was impossible to know how much milk he was getting. The only way to judge his intake was output, and by night two he had only peed once. We tried to get re-admitted, but were denied. I made frantic calls to La Leche League and the pediatrician we had chosen during pregnancy who hadn’t even met his newest patient yet.

When The K Man was just three days old, he started passing urate crystals because of dehydration. It was clear that I had no milk.

Thankfully, our pediatrician was affiliated with Toronto East General Hospital’s free family breastfeeding centre, which became a second home to us for the next two weeks. They lent us a hospital-grade breast pump, a shoulder to cry on, patience and a lot of advice. Plus, they agreed that the little guy just needed some nourishment and supported my decision to temporarily supplement with formula, which I used in an eyedropper on my nipple, still bringing my baby to my breast.

I drank milk-producing teas all day.

Days four and five were filled with tears and more trips to see lactation consultants at the hospital. Still no milk. But by now I was bound and determined to get back to that beautiful breastfeeding connection my child and I made the day he was born. I nursed on demand and around the clock, followed by pumping each time, to stimulate my milk. I still had no idea if he was getting a drop.

Finally, day six arrived and so did my milk. With gusto.

Finally, my baby was peeing and pooing the way babies should.

Finally, we re-ignited our breastfeeding relationship. I tossed the eye dropper in the garbage and put away the cans of formula.

He put on weight so furiously that following week that the nurses and LCs at the breastfeeding clinic could barely believe the scales. The K Man went on to breastfeed for 14 months. I was an advocate of public nursing, and we managed to get out and about a lot with ease thanks to on-the-go breastfeeding.

Fast forward a little more than two years. For some reason, in the months and days leading up to Miss Q’s birth, I never wondered if I would have milk-production issues again. Fortunately, I didn’t. And she breastfed until she was two-and-a-half years old, stopping only because I needed to take a massive course of prednisone. Now nearly four, she still finds great comfort in laying her head on my naked breast, still calling them “milkies” with affection. She remembers her milkies fondly, recounting that it tasted “sweet like honey.”

By the time I nursed two babies for 44 cumulative months, I had amassed every gadget that could help me breastfeed successfully: a My Brest Friend nursing pillow, nursingwear, a Boba 3G baby carrier with easy-to-loosen straps that made public breastfeeding a breeze, and even a little wedge (the Utterly Yours pillow) to hoist my milky boobs into place for optimal nursing.

I hung out with many other nursing mothers during both maternity leaves, and I assure you that those breastfeeding gadgets were not the hot topic of conversation. But you know what was? The big question: How much breast milk is my baby getting? For those of us who either choose not to or are unable to bottle-feed (even bottle-feed using breast milk), trying to figure out how many ounces of milk your baby drinks in a single feeding is like the holy grail of nursing mommies. We all surmise. We all have theories. 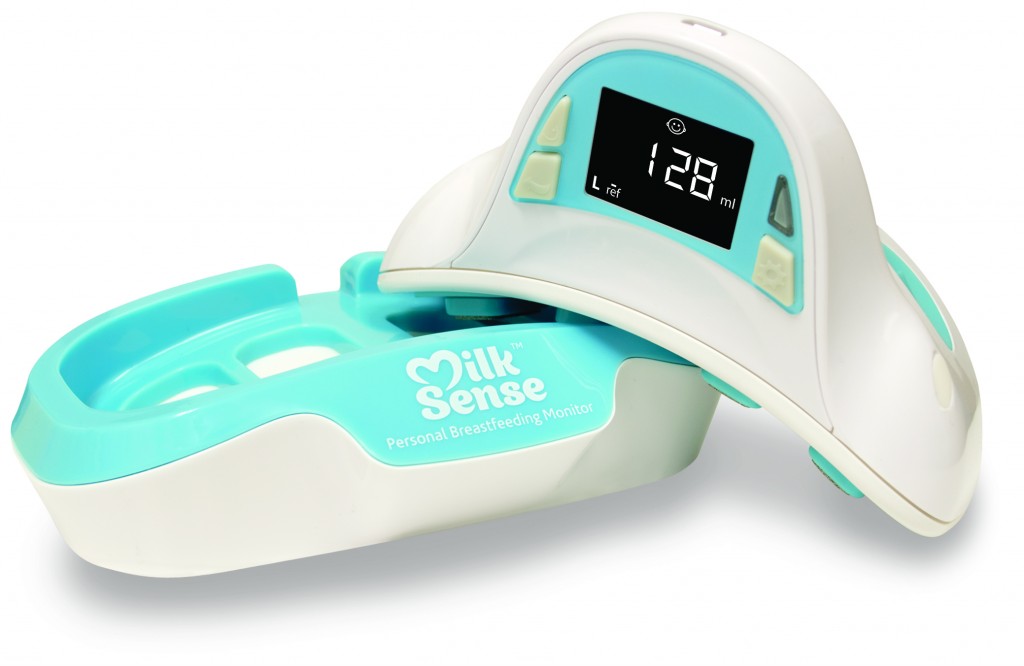 Those of us who fall more on the Type A side of things will be thrilled to hear about the new MilkSense device, which is the world’s first breastfeeding monitor. After just three uses, it becomes customized to YOU and in just 10 seconds can tell you on average how much milk your baby consumed, and can help you remember on which side you last fed (hallelujah!). Best of all, it never comes into contact with your wee babe, and it has no negative effects on your breast milk. There are no Phthalates, BPA or PVC, either.

Sounds to me like MilkSense would have taken away that one last nagging question that logic could just never satisfy for me. I would have added peace of mind, especially during my first breastfeeding experience. Especially when it was in turmoil in those early days. That little bit of extra control would have helped provide me with some confidence and security in a situation where I felt so out of control. It also would have helped me figure out if I could have fed a whole baby soccer team as I suspected.

When you buy MilkSense, it also comes with something called the Bscale; and this won’t look like an alien contraption to those of you who had midwives come to your home to weigh Baby in those first few weeks. It’s very similar and means fewer trips to doctors and clinics just for weigh-ins.

Tracking the side, date and time of feedings is usually pretty important in the first months of breastfeeding, and MilkSense does that for you, too. So you can do away with apps or random scraps of paper. And you no longer need to rely on what I liked to call the “scrunchie method” — whereby I used to put a scrunchie on the wrist matching the side on which I just nursed. Or needed to nurse from next. Hmmm…therein was the problem — I never remembered!

Just keep in mind that MilkSense doesn’t work with colostrum, that liquid gold that first feeds your baby before your full milk comes in. Your baby needs to be about a week old to start using the device. Your baby must also weigh more than 4.4 pounds and MilkSense is therefore unsuitable for preemies. Watch for it on store shelves in the U.S. first on January 11, 2015.

At the end of the day, it’s impossible to know if you’re going to have breastfeeding problems before you actually start breastfeeding your new baby, but I hazard to guess that the vast majority of nursing moms — whether they’re nursing their first baby or their fifth —  wonder how much milk their babies are getting.

It’s not even about worry for many of us. It’s just about wonder.

And it sounds to me like MilkSense satisfies both.

On Thursday, Jan. 15 (2015), join MilkSense and many of your favourite parenting bloggers for a Twitter party. Lots of prizes, including a MilkSense device! Open to residents of Canada and the U.S., but you must RSVP here to qualify:

DISCLAIMER: I was compensated for this post, but I agreed to write it in the first place because I am passionately pro-breastfeeding and believe that with the right support and tools, most women can be successful. It’s a powerful (and free!) way to feed your baby and has so many wonderful emotional and nutritional benefits. I have not, however, personally tested this device and can therefore not make any conclusions about its functionality.