When I was pregnant with The K Man, there were some things that I researched to death before I bought them, while others were purchased with much more spontaneity.

As I wandered through a baby store one sunny afternoon when I was about eight months along, I stopped in front of the breastfeeding pillows. There was a wall of them. I’m not kidding – an entire wall devoted to nursing pillows. Some shaped like half-moons, some like letters of the alphabet and others still like fortune cookies.

Perhaps it was the look on my face. Perhaps it was that my jaw might have been on the floor. But a nice woman walked by me, pointed to one of the pillows and said, “You want that one. Trust me.”

I don’t know why I did trust her (I don’t trust easily), but her absoluteness convinced me to grab a My Brest Friend off of the wall and head to the checkout.

So firm! The support is amazing, and I never felt like either of my babies was going to flop anywhere. This also means that your back isn’t going to suffer like it would if you use, say, a down pillow that you’ve been sleeping on for the last 17 years. At the same time, it’s obviously comfortable enough for a wee baby because both of mine consistently fell asleep nursing on there, and would sometimes sleep there for quite some time after I unlatched them, too.

There are these subtle little “bumps” on either side of the My Brest Friend pillow. These 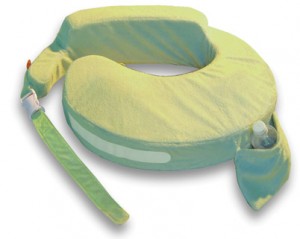 The surface area is quite generous. The K Man was nearly nine pounds at birth and Miss Q was more than nine pounds, and each surpassed the 100th percentile  for both height and weight by the end of the first month. Both fit on My Brest Friend’s surface for the first two to three months of life. They’d have been fine to continue if I still needed to use a breastfeeding pillow beyond those early months, even though their feet would have been dangling off the end.

Lots of fabric and pattern/colour selection available. Even more now than when I bought my “Deluxe” version in, gulp, 2008. Might I suggest something microfibre to make spot cleaning effortless? You’ll probably go with the cute print in the cotton fabric instead, but I wouldn’t feel right if I didn’t try to steer you toward the easier-to-clean option. There’s a lot of yellow-tinged baby barf and squirty poops in those first months…

Somewhere in the last four years, I noticed that My Brest Friend now sells extra slip covers. If you don’t follow my advice later on in this review, I suggest you purchase an extra cover to keep handy for days when you can’t get all the washing done between feedings. Just keep in mind…

The cost of an extra slip cover is steep. At about $30, it’s half the price of an entirely new My Brest Friend (cover and pillow). This should sit closer to the $1o to $15 mark, in my opinion.

Removing and re-fitting the cover for washing sucks. Just forget it. Use receiving blankets to cover it up and wash those instead.

I find the pocket (which you can use to hold a soother or something ultra-important like a TV remote) is in an awkward spot to get to; if your babe is nursing, you have to lean over her to reach the pocket. Not ideal.

The buckle…I find so odd…I think it gives the impression that you should just get up and walk around with your baby on the pillow. Don’t do this. You’re tired and all that nursing is zapping you of energy and brain cells (OK, maybe not really that last part, but it sure feels that way), so you’re probably a clumsy ol’ mess. Just sit down, relax and take in the smell of your new baby. Watch how his toes rub together contentedly as he nurses. Listen to his happy little noises. Enjoy one of the only quiet moments you’ll have all day.

This isn’t really a design flaw, since My Brest Friend isn’t intended to be a travel breastfeeding pillow, but the firmness doesn’t lend itself to being very portable. Here’s a true story: one of my best friends, bless her heart, had a rough go with breastfeeding. It was a struggle for months and it just didn’t seem to click for her and her baby as quickly as it does for some moms. And – for months – she carted that My Brest Friend around with her everywhere: to play dates, on walks to the park, for road trips. It became part of her uniform, strapped across her chest like a round of bullets. Rambo-Mom. There was nothing sleek about that look. I guess what I’m saying is that you shouldn’t use My Brest Friend as an accessory.

Its shape doesn’t lend itself to being quick and easy to put on and take off. You have to kind of curve it around your waist. Ultimately, you will learn to do this one-handed while holding your bambino, but it’s not easy at first. It’s actually feels quite unnatural and you’re gonna look like a bit of a fool for a while.

4/5 (rated only for newborn through six months)

« AquaMobile Swim School – lessons in your own pool!
The Morning Show (with Liza Fromer): babywearing recap »