Even as adults, we do more of this than anything else: sleep. Even more so for babies. Although I don’t consider myself an “Earth Mother” who gazes longingly at trees or plans to home-school, we do subscribe to a fairly organic lifestyle. We might even be radical hippies in the ‘burbs for using our green bin – with cornstarch liners, thank-you-very-much.

When The K Man was a few months old (we’re talking 2008 here), I started to read more and more about the toxic chemicals and materials used in mattresses, including crib mattresses, that’ll probably be banned in as little a couple years from now. It could be the BPA of the next decade. I read about “off-gassing,” which even if you do no more than read this blog, you can tell just by its name that it isn’t a good thing. At a minimum, my first-born would be sleeping 12 to 14 hours a day on that mattress for at least the next four years (his crib turns into a day bed). Did I really want to take any chances with his health? Not so much; so I started looking for an alternative to the mattress that came with his crib set.

I finally settled on Na 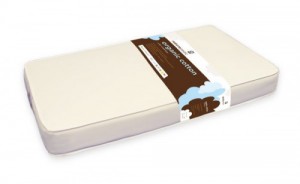 turepedic’s No-Compromise Organic Cotton Classic mattress. We bought the 150-coil version, but it’s also available in a 252-coil option (for newborns) and also a two-sided version with one side that is slightly firmer for infants and the other a slightly softer side for toddlers. If the dual-firmness version was available when we bought ours, I think I would have gone with it.

First and foremost, this is a PTPA-approved product. This is such an important 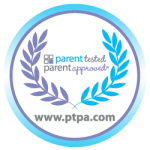 designation to me. It means that you can trust that a panel of discerning parents, just like you, have rigorously tested the Naturepedic No-Compromise crib mattress and it came out on top.

While the mattress is filled with organic cotton, I especially like that it has a waterproof outer layer – made of environmentally friendly, food-grade and non-toxic Polyethylene. Let’s not kid ourselves – there will be “accidents.” We’ve wiped this mattress down more times than I can count in the four years we’ve used it.

Once we replaced The K Man’s old mattress (which, by the way, went to his grandparents’ house – not a landfill – where there’s a crib for any of the grandbabies to use), we also noticed just how much more firm the Naturepedic mattress is; which is, incidentally, one of those recommendations from experts for better sleep and lowering the risk of SIDS (crib/cot death).

One thing I wasn’t so fond of is that that waterproof shell means that it doesn’t feel so soft, even with a flannel sheet overtop. In fact, it’s kind of crunchy. So less than a week later, I also found myself buying the Naturepedic Organic Flannel Mattress pad ($65 at Baby on the Hip). Now that made it cozy!

Although I’m sure its size is intended to ensure there are zero gaps around the crib’s perimetre, the No-Compromise mattress seems to be slightly bigger than my daughter’s crib mattress – another organic brand that I plan to review another time – and it’s bloody hard to get a fitted sheet on it without taking the whole thing right out of the crib. Kinda annoying, but since it’s likely a safety feature, I really shouldn’t knock it.

Is the No-Compromise mattress more expensive than the average crib mattress? It is. But the fact is this: whether you’re talking food or clothes or bedding, organic costs more. But this can be a barrier for many parents; spending upwards of $400 on a crib mattress just might not be in the cards. But if you think of it in terms of price per use, it might help make the price a bit easier to take. Consider that you’ll use this for around four years (from crib to toddler bed) – that’s about $100 per year, which equals a bit more than a quarter a night.