I’m not gonna lie: we watch a lot of TV at our house.

I was the kid who would wake up at 5 a.m. if I knew a certain movie or TV show would be on (before I could actually tell time), sneaking downstairs in the dark, sitting close to the tube so I wouldn’t have to turn the volume up too much. I’d sit and bask in its glow until someone came to make me breakfast.

I’ve been without TV for one year out of my entire life. I lived in South Korea and thought I’d give it a try. Even with a very active social life, I still missed it – though I did persevere.

One of Big B’s and my favourite hobbies is TV. For real. We watch a tonne of shows, curled up on the couch together.

But when we had The K Man, and I learned that TV isn’t recommended at all for children under age two, I set some pretty strict limits on screen time. He watched his first show at probably four months old – it was Baby Mozart (a Baby Einstein classic) and he smiled and laughed and waved his arms with excitement as the images of flea-market toys flickered past.

Until he was two, he probably watched somewhere in the neighbourhood of 20 to 30 minutes of TV each day. Definitely more than recommended but I was OK with our decision and planned to keep those limits in place when we had Miss Q.

And then we actually had Miss Q and it all went out the window. Television, sadly but inevitably, became my babysitter in the desperate moments when I needed to nurse a baby into the nap zone or change an explosive diaper. The TV was a reliable babysitter, too. Most often, my little boy – only two-and-a-half when his sister arrived – would be right where I left him, happily watching Timothy Goes To School or The Backyardigans.

I wasn’t proud of the amount of screen time he was getting but it was working for us. And, as any overwhelmed parent can attest, sometimes you just have to do what works – even if it goes against every study, report, intention or instinct.

I kept telling myself that it was a short-term solution.

But then Miss Q got older. And mobile. And somewhere in between the playing and giggling and reading, I needed to make meals. We have intentionally kept a TV off our main floor – I never want to compete with a TV during dinner or when company is visiting. Yet now my kids are independent enough that they’ll just wander downstairs and turn on the TV while I’m cooking.

Enter Netflix and its new Just For Kids aggregated content. Netflix was kind enough to provide me with a three-month membership to test out the service (in fact, anyone who wants to try it can do so at no cost for one month).

You still have the option to choose “regular” Netflix or Just For Kids when you power-up your streaming device, so you’re not choosing between one or the other. We’ve taught The K Man how to select Just For Kids, and it essentially takes all of the kid-friendly programming available in the vast Netflix library and aggregates it. He doesn’t need to skip through “you just watched” adult programs (like The Walking Dead, to which both Big B and I are now fully addicted thanks to Netflix) to get to the shows and movies that are appropriate for him and his sis. 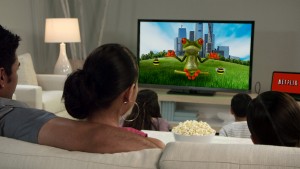 This is not my family. And I have no idea what show this is. (Do you know how hard it is to take a pic of a TV show?!)

Loads of kids’ movies. And some that are fairly new releases, too. I’m pretty sure that my kids aren’t the only ones who will watch a singular movie over (and over and over), and this means that some of your favourite DVDs won’t take a beating. Our copy of Cars, for example, is so pixelated from overuse that it just stops working most of the time. Rio isn’t far behind, so thankfully we can watch that one on Netflix. Over. And over. And over.

My kids have been introduced to classics like Paddington Bear and odd-but-ridiculously-entertaining shows like Pingu. (Let me qualify that: ridiculously entertaining for The Kids. Not for you. Unless the sound of gibberish with an Italian accent is your kind of thing.) And then there are the standards like Diego and Dora (or “Doda” as Miss Q calls her). Friends of ours got Netflix Just For Kids for their daughter who will only watch The Backyardigans because there are, like, 58 episodes available.

No commercials. Ever. Bliss.

I love the versatility. We can use our Netflix and Just For Kids membership on any TV in our home that has a streaming device. Or on our iPad. Or on our laptops.

Netflix remembers where you are in a TV series – whether that’s three-quarters of the way through episode five in season three, or whether you just finished episode 27 and need to move on to 28. You have the choice to go back to the beginning, but for kids who are vigilant about watching chronologically, this is brilliant. This goes for movies, too – if you need to stop watching and resume later, Netflix will just start where you left off. Like PVR, but this is far more consistent.

The cost is hardly noticeable. We like the service enough that we have decided to continue paying the $7.99 monthly fee. It’s definitely worth the daily charge of about 26 cents a day. And considering we watch far more TV than our kids do, it’s been excellent value for us, too.

Bottom line? My kids love it. They barely ask for “normal” TV anymore.

Max & Ruby is readily available on Netflix. Gawd, how I hate Ruby. (Is “hate” too strong a word for a fictional talking bunny? No. No, it’s not.)

Not every streaming device yet supports Just For Kids. A Wii console, for example, does, while a Roku2 does not. If you’re purchasing a device specifically for Just For Kids on Netflix, please be sure that the platforms are compatible.

There isn’t a steady influx of new content. This is not like TMN, where every month you’re guaranteed to have several new movies, shows or series available (nor does it come with TMN’s price tag). In the three months that we’ve been testing Just For Kids, we have noticed only some new content. That said, we have by no stretch exhausted what’s available. Not by a long shot.

Saddle up, partner – you need more bandwidth. We were getting by with 25GB of download space from Rogers – for years. Until Netflix. We’ve had to upgrade to 80GB to avoid the ridiculous overage charges we were facing. Remember: every time you watch a program on Netflix, you’re using your internet.

Speaking of the internet, and this is not Netflix’s fault in any way, you’re relying on your internet provider every time you watch. So if your service is interrupted for any reason, you may (a) have to re-boot your program or (b) actually go through the steps to check and re-connect to the internet. This is frustrating.

How to teach your kids to ski
Truli wetsuits review -- just for women
My fave beauty products of 2016 (so far...)