I’ve said it before, and I’ll say it again: I love video games and I think they can be beneficial to our kids.

I’m not talking about late-night gaming that verges on dangerous obsession, but — like anything — in moderation. There are, I believe, healthy outcomes thanks to early video game use: problem solving, hand-eye co-ordination, sharing.

In fact, I’d rather my kids play a few video games instead of watching the tube. So I had no problem whatsoever accepting a WiiU so The K Man could re-create the excitement he felt when we were invited to preview the new Mario Party 10.

I’m going to start with the WiiU before we move into the Mario Party 10 part of this review. And WiiU pretty much smashes the Wii. So if you had no intention of upgrading, you might want to stop reading because after owning both, I’m here to tell you that it’s so worth the upgrade. The biggest reason is the game pad included in the package price (which is around $300). This little rechargeable wonder is an all-in-one entertainment unit that not only interacts with your video games in lieu of the traditional controllers — though those still work, too, if you want to add players — but also acts as a mini TV screen, remote control for Netflix and other Internet-enabled options on the WiiU. The touch-screen is pretty big (6.2 inches) and the more you use it, the more cool functions you discover: motion control, front-facing camera, microphone, speakers, rumble features, sensor bar and even a stylus. For example, when you’re playing Mario Party 10 as Bowser (which I’ll touch on shortly), you can actually blow into the game pad so Bowser breathes fire. Trust me, it’s cool.

I use the game pad primarily for Netflix, because it makes it really easy to navigate between shows. (It’s the little things…) But The K Man loves using the game pad because it offers a different perspective into his game; and by that, I mean when you look at the TV, you have one view of the game (like the traditional video game view, where you see all of the characters on the screen, including your own), whereas when you look at the game pad’s screen, your view is from another point of view (like seeing the game’s landscape through YOUR character’s eyes). Trust me, that’s cool, too.

I also really like the charging cradle for the game pad. And, yes, I know this is now the THIRD paragraph about the game pad, but it’s earned it.

The ability to download games instead of purchasing them at a store and loading the software via DVD is awesome. If you never want to leave your couch, this feature makes it possible.

Like the Wii, the WiiU also has a motion bar that you attach to the top of your TV. I love this technology and its ability to keep gamers physically active.

All Wii controllers and games work on the WiiU — quite a plus if you’ve already invested heavily in extra controllers, nunchuks and various games.

Our kids love the MiiMaker where they created little cartoon characters of themselves. I don’t let them do much beyond that because I’m too wary of letting them engage with The People On The Internet.

Twelve — yes, 12! — individual users can keep active profiles on the WiiU. And if you’ve got more than 12 gamers in your home at any given time, I think we need to have a talk. (Oh, and if you’re worried about someone’s usage, you can even track his or her daily records.) 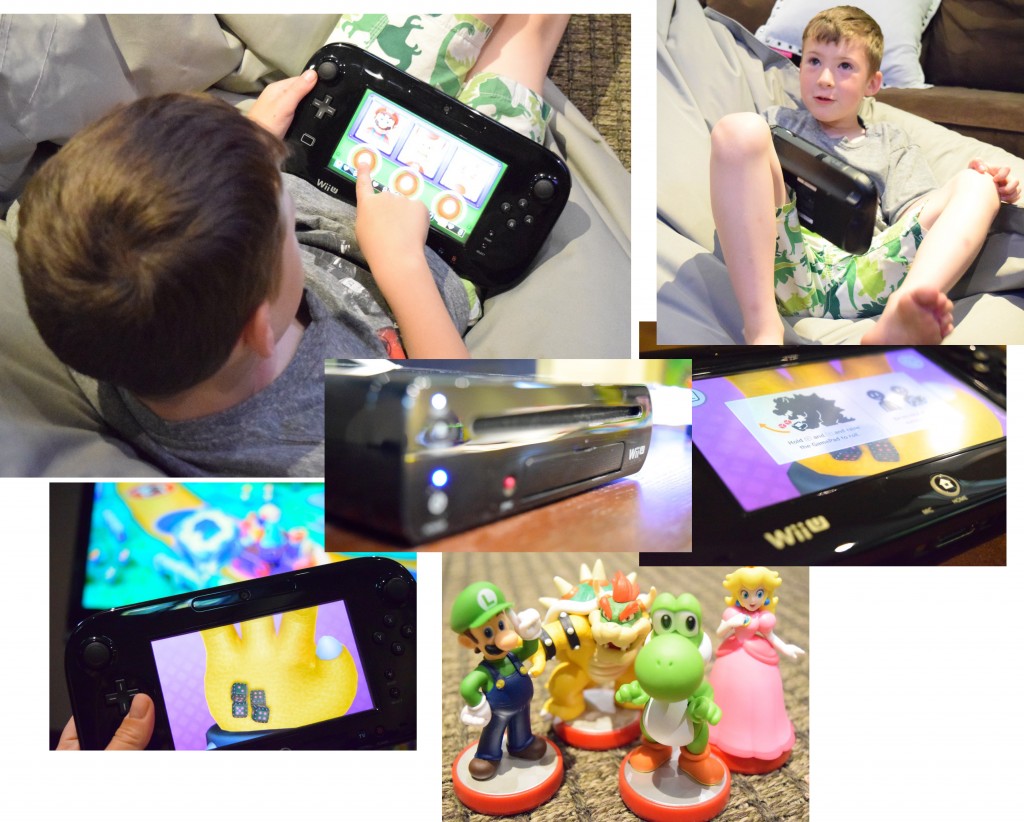 Now onto Mario Party 10. When it first came out, The K Man saw a commercial and came running up to me screeching: “I can play as Bowser, Mommy! I CAN PLAY AS BOWSER!” As someone who played a lot of Super Mario Bros. in her younger days, I know full well who Bowser is; but the fact that my kid could now play AS the bad guy was news. Big news, apparently.

Mario Party 10 is more like a series of mini-games than one, bigger game like Super Mario Bros. that follows a clear path and story. Mario Party 10 is the slot machines at a casino. The games are fast and furious, and perfect for a kid’s fleeting attention span.

I love that the game involves numbers and math, as well as quite a lot of reading. No chance The K Man would have been able to handle all of the reading last year, but he’s got it mastered now. Miss Q doesn’t want to play Mario Party 10, but she DOES want to sit beside her big brother while he reads out loud to her.

WiiU doesn’t play DVDs or BLU-rays, which is a big bummer.

Game download time is long. It took a good 45 minutes to fully download Mario Party 10 onto the WiiU, and we have the fastest Internet service available. So if you’re itching to play within seconds, you’re gonna need to go have a snack or something.

Although The K Man isn’t frustrated by this, I could never play Mario Party 10 for long. I want to progress. Go somewhere in a game. I want to constantly out-do myself and pass through levels. I like a clear path. This is simply one quick game after another and nothing seems to be interconnected or dependent on what you did in one of the other games. All that to say, I’m pretty sure I’m not the target audience.

The amiibo characters are cute, and we’ve amassed a nice little collection of the things, but The K Man rarely chooses to play with them — including both interfacing with the game and game pad, as well as imaginative play. They’ve got nothing on Skylanders in this house. However, he must be the minority because every time we go to Toys “R” Us lately, there are signs posted everywhere that it’s only one amiibo character purchase per person.