When I’m asked to review something that I think sounds great, interesting or borderline ridiculous, but I can’t test with my own family, I turn to my Facebook page and offer my readers a guest review opportunity.

These are moms and dads, just like you and me, who also want to see if a product’s worth its weight in your proverbial gold. Guest reviewers receive the products for free and get to keep them in exchange for their honest reviews. Like my own reviews on Mommy Gearest, receiving a product does not automatically earn a positive review.

This is written by Dorota Sanchez who received an O.O.T.W. VIZI doll. She (Dorota, not VIZI) is the proud mommy to three kids under four. And she wants another one – stat. She’s kinda nuts if you ask me.

We want answers.  We all do – even little four-year-old girls.  Hence, the excitement of my daughter when she was presented with VIZI, a future-predicting five-inch tall vinyl toy doll from O.O.T.W. (out of this world). 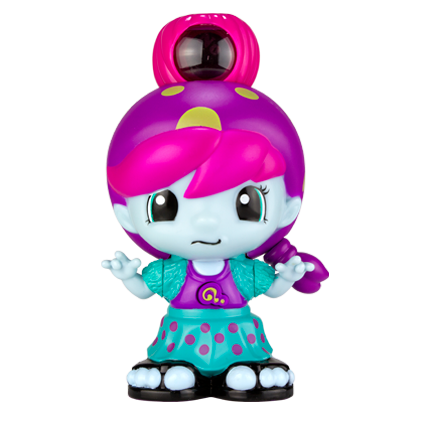 VIZI has excellent presentation.  The doll screams bright colours (highlighted by her orange hair and purple bandana with green polka dots).  She has large, peering eyes and a window within her hair on top of her head where she reveals the answers to your queries on a small die.  Yes – a window in her hair…you read correctly. Think of it as a Magic 8-ball in her head.

The box has a large opening to display VIZI in her entirety, and you can test her out without even removing her from the packaging by “shaking” her. Press a question mark button on her tummy, and anytime there’s a new answer, a light illuminates the die.  Pretty neat. The packaging would definitely draw my daughter’s attention on a store shelf.

The back of the box has a beautifully written declaration of all my daughter could expect from interacting with VIZI, as well as pictures of her other O.O.T.W. friends.  We were provided with the O.O.T.W. brochure, which contains equally impressive descriptions of the rest of the “vinyl-mation” doll fleet.

After explaining to our four-year-old toy tester what VIZI can do and how she functions, it was time for fun.  Though, a young child’s first questions were kind of tough for VIZI to answer with her limited “vocabulary”:

After again explaining to her that she should only ask questions that can be answered with “yes”, “no,” “totally,” “of course,” and “doubt it,” (and then explaining what all but the first two of those responses actually mean), and that VIZI was not “borned” but rather made in a toy factory in China, she was ready for more fun.

For the next 10 minutes, my daughter and VIZI (and me too, admittedly) had a good time.  Her questions gradually became more and more imaginative (from “Are mermaids real?” to “Will I be a butterfly when I grow up?”), and she laughed a lot at most of VIZI’s responses.

VIZI is quite durable.  My two-year old daughter and eight-month-old son each had their go with the doll, and after being slobbered on, dropped down stairs, and even rescued from the pool, VIZI still works – most of the time. She incited my daughter’s imagination, and she can be used for more than just predicting the future; after the first few days, VIZI became just another doll to “play house” with.


The age recommendation for VIZI is 4+, and this might be a tad low.  To play with this particular O.O.T.W. doll as intended, without a parent on stand-by, the child must be able to read VIZI’s responses.  Although our daughter can recognize “Yes” and “No,” she could not read the other responses, and after a short while, was annoyed with having to come and ask me what VIZI was “saying” to her after nearly every shake.

Even if I wanted to use VIZI to teach my daughter to read a few new words, and understand a few new phrases, the window display of the die could be larger for easier readability, and the built-in light was needed every time since the die holder is dim.  The concept of predicting the “future” was also not something my four year old could really wrap her brain around, and although she likes asking questions – A LOT of questions – they typically were “Why?” questions, as opposed to closed-ended questions.

After playing with VIZI for several days, and mostly at my urging after the first two days, my daughter was over the excitement of a new toy.  VIZI is one of five O.O.T.W Girls (all with a $9.99 retail price tag), and the product line includes O.O.T.W pets and accessories.  I showed my daughter the other O.O.T.W. Girls in the catalogue, and she was pointing out which dolls she would rather have, because they looked like more fun.  In fact, VIZI is the only O.O.T.W. Girl that isn’t smiling – I suspect she is troubled by her future outlook.

As our month with VIZI came to a close, the tables were turned – my daughter would now predict VIZI’s future.  When asked if she would ever play with VIZI again, her response was decidedly appropriate:  “Doubt it!”

3/5 (for pre-readers; would fare better with an older crowd)