This winter has been brutal. And for many of us across the Eastern Seaboard, it’s far from over. So if you thought you could escape the slush and snow and salt…think again.

And with that in mind, are you really surprised to hear that I’m on Chester’s fifth pair of dog footwear?

We’ve tried Muttluks (hard to get on when your pup has protruding dewclaws; plus they flipped off as soon as he took a leap); Pawz (which stay on through 85 per cent of fast and rough dog-park play but are essentially tiny balloons…so look like balloons on your dog’s feet); Neo-Paws (which are pretty fantastic but involve a time commitment to get outside); and dog socks (that don’t stay on for longer than 12 seconds if you have a puppy who has a thing about chewing socks).

So when I saw Pawsh Pads Paw Protectors at a posh puppy place in the city, I knew I had to try them with our dear Chester. Thanks for sending us a set to review, Pawsh Pads peeps! 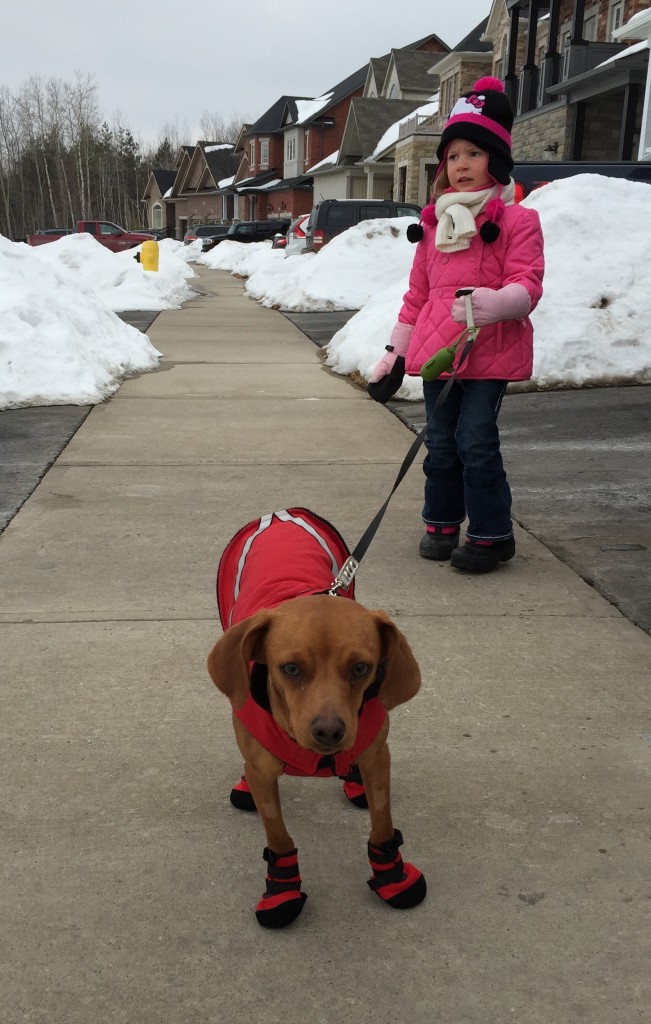 Easy peasy to get on your dog’s paw. They slip on like a sock, but they’re wide so there’s no cajoling stray toes or dewclaws to co-operate. Then you just fasten Velcro around itself at the base of the paw and then up around the ankle (or whatever ankle-like area exists on a dog if it’s not actually called an ankle). You don’t need a PhD or rocket science-worthy instructions to get Pawsh Pads on, which will come in handy when we leave Chester with my parents who took one look at our Neo-Paws booties and cackled at me.

They’re perfect for keeping salt and gravel or other small bits of debris out of your pup’s paws.

Pawsh Pads stay on. Period. We took Chester to the dog park on the weekend and he raced around for more than an hour, probably covering 10 kilometres by the time he’d finished running about. Unlike the Pawz balloon-type boots, these stayed on all four paws through the entire park visit.

Since we’ve only tested them for about a week, I can’t tell you how Pawsh Pads are going to do durability-wise, but we’ve been through wet, muddy, dirty, snowy and icy areas (welcome to March in Ontario!) and they’ve performed well.

They’re soft-structured, so unless you fasten them on REAL good, you might find one or two of them twist around a bit, leaving the bottom suede part sort of on its side. Practise will help.

Pawsh Pads are perfect for cool temps but I found Chester’s paws were very chilly in the coldest weather; for those days, I’ll revert to the Neo-Paws for sure.

I do find the design a bit wide around the ball of Chester’s paw, but I suppose not everyone has a skinny dog like I do, so this is probably not going to be a universal gaffe.