I don’t really remember anyone teaching me how to ride my bike. I have only vague recollections of being on training wheels, but a very clear memory of the day they came off. I woke my Dad up at the crack of dawn and told him I wanted him to remove them. I think I was five or six years old.

After taking them off, he did what every other parent in the late-’70s and early-’80s would have done: left his kid outside to play on the street while he went back to bed.

It was a triumphant morning. Despite skidding down a (paved) ditch – sans bike helmet because this was simply not done back then – and scraping the entire left side of my body, I managed to figure out how to balance on my two-wheeler and ride off into the sunrise.

Fast-forward 30-something years and do you think my six year old wanted to get rid of his training wheels? Nope. Not even a little.

“They make me feel safe, Mommy.”

“I don’t want to feel fast because fast is scary.”

And this is the tip of the iceberg. There were tears, shrieks and full-blown tantrums. As I relayed these stories to a girlfriend one day, she mentioned that she hired a private bike instructor from Pedalheads to teach her six-year-old son to ride his bike without training wheels; he was off of them in an hour, she said. But we live in the boonies and Pedalheads said there was no way they were going to be able to send someone all the way out to us. Fortunately, though, we could go to them.

Pedalheads let The K Man try out its half-day bike camp for Level One riders, and I decided to make the most of our hour-long trek into the city where the camp took place, so I registered Miss Q for the three-year-old class that week, too. And I’m so glad I did. 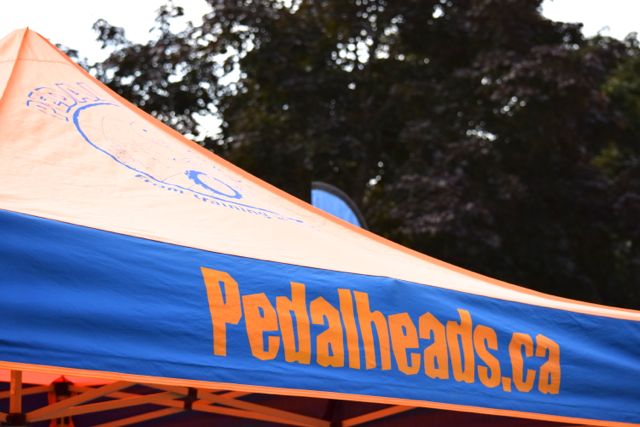 On day one, The K Man was on training wheels for all of 20 minutes. After a few trips up and down a strip of pavement at Blantyre Park in Toronto to test out his braking and steering skills, the instructor (Jessica) took off the training wheels. From then on, we’ve been training wheel-free, even though he still couldn’t ride it on his own. Miss Q arrived having been on a tricycle a few times but having NO CLUE how to pedal; by the end of her hour-long program, she could easily pedal about 10 feet if the instructor (Sydney) gave her a little push to get started.

The K Man’s class had only four kids, while Miss Q’s had but two. Amazing student-to-teacher ratios.

Kids can move up a level mid-week if they need to. That’s great flexibility when you’re paying a couple hundred dollars for your kid to progress, and we all know they progress at different rates.

The three-year-old program at Pedalheads was only $99 for an hour a day for five days, or about $20 an hour. To have someone else bend down for an hour, five days in a row, to get my kid pedalling. Over and over and over? Worth every penny. I’d pay them all over again in a heartbeat.

The half-day camp, which is 2.5 hours a day for five consecutive days, is $179. Just a little more than $14 an hour. Terrific value for money. Especially if, like me, you’re an older mom who isn’t in the top shape of her life and who might very well pass out if she had to run up and down grassy hills for two hours.

There were a lot of balance and steering drills, which I think made a huge difference in terms of skills and confidence. Even in Miss Q’s group they had to steer through pylons or stop in the middle of a bull’s-eye.

At the end of the week, Miss Q was pedalling effortlessly up and downhill, steering like a champ and doing it all with a smile. The K Man could keep himself upright for a good 25 feet or so thanks to the momentum of the park’s massive hill, but he still couldn’t bike ride independently. However, with daily practice at home, he’s now biking at least 200 feet on his own with a tiny push from a grownup. We’re so, so close now. Without Pedalheads, I can say with total certainty that we’d still be using training wheels. In fact, I was so impressed with both of their progress and the quality of the programming that I’ll be taking them back next year.

OK, I’ll admit it: Pedalheads feels like a bit of a cop-out. I mean, isn’t teaching your kid how to ride a bike, like, a parenting rite of passage? This thought nagged at me until day two when I left while both kids were in camp and I went to grab a Starbucks and have a pedi. Then I got over it.

There may be annoying kids in your child’s class. Miss Q had an awesome little girl to hang out with, but The K Man had two disruptive boys who weren’t very nice. In fact, one of the boys wasn’t even nice to his own mother! Thankfully, I have a kid who would rather go hang out by himself and look at ants than be bothered trying to fit in. The instructor never seemed to notice or was too busy to care, so the behaviour didn’t get any better as the week went on.

The only time I ever felt like the kids weren’t getting as much time and attention as they should have was during ramp drills, where The K Man’s class would merge with another four-kid group and the instructors would work together to get kids up and over a ramp. While the drill itself was great, it really didn’t require the help of two instructors and it ultimately meant that each kid got a turn every eight times – or about every 10 minutes. After two to three rounds of this, half an hour was gone and your kid would get about three minutes’ worth of instruction during that time.