Something we don’t really get a chance to do here in southwestern Ontario is go spring skiing. That beautiful balance between snow on the ground and warmth in the air, to which only mountain living is conducive. Vermont is the perfect example of spring skiing done right — especially with yet another Nor’Easter hitting hard again just this past weekend. Most of the ski resorts are still open for at least another week (or three!), so here are 4 places to go spring skiing in Northern Vermont.

And even if the weather gets dicey while you’re there, Vermont’s food and beer scene is plentiful enough to keep you occupied if the slopes end up more wet than whoosh. You might have to play hookie and just get there already. From the Greater Toronto Area, you’re only looking at a six- to seven-hour drive. 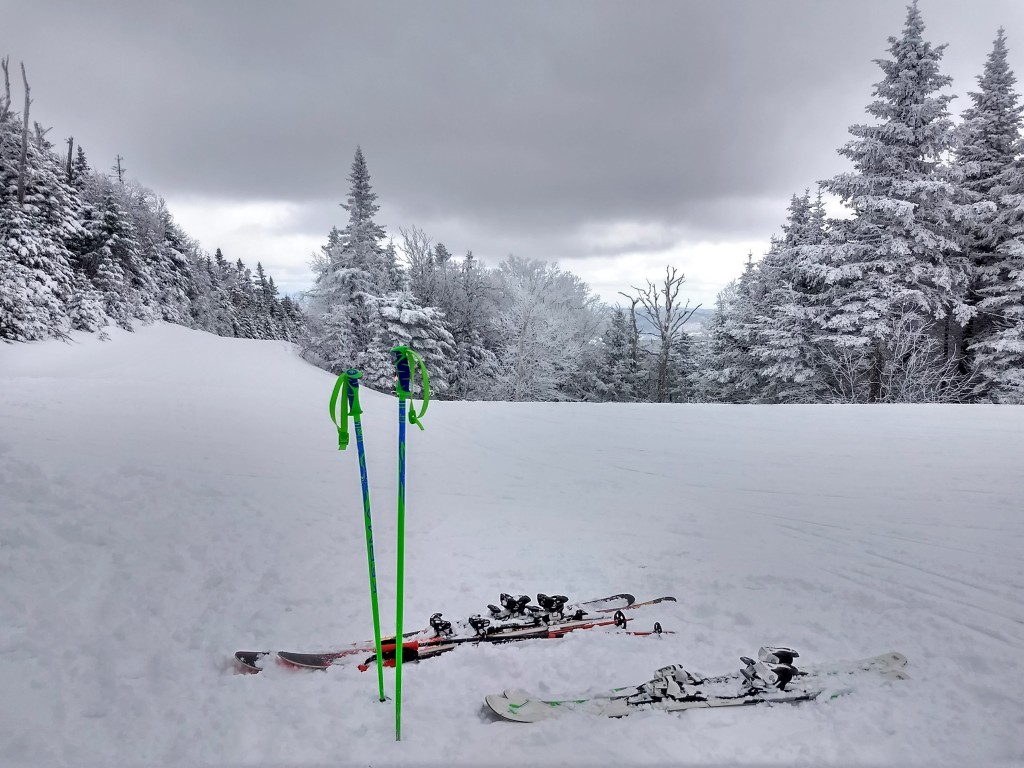 Taking a break at the Sugarbush Resort summit.

Sugarbush offers outstanding intermediate to expert terrain, with lots of ungroomed fun and plenty of man-made bumps to challenge anyone. Ride the summit trail called Jester from an elevation of 3,975 feet around the outer edge of Lincoln Peak for a beautiful cat-wide run with epic views.

There are still plenty of events left until the end of the season so you can get your ski on. And Sugarbush is reporting coveted “corn snow” now, too. This resort is open so late in the season that there’s even a “ski and tee” weekend when you can buy a $50 lift ticket and golf for free the same day.

If Lincoln Peak is busy, be sure to jump in the free shuttle and head to Mount Ellen where it’s usually a bit less skied out. While you’re there, make sure you plan to arrive at the top of the Green Mountain Express Quad and have lunch at Walt’s. If you don’t have one of the eight or so artisan grilled cheese sandwiches on the menu, pack up your things and just go home — and let’s pretend we never met. 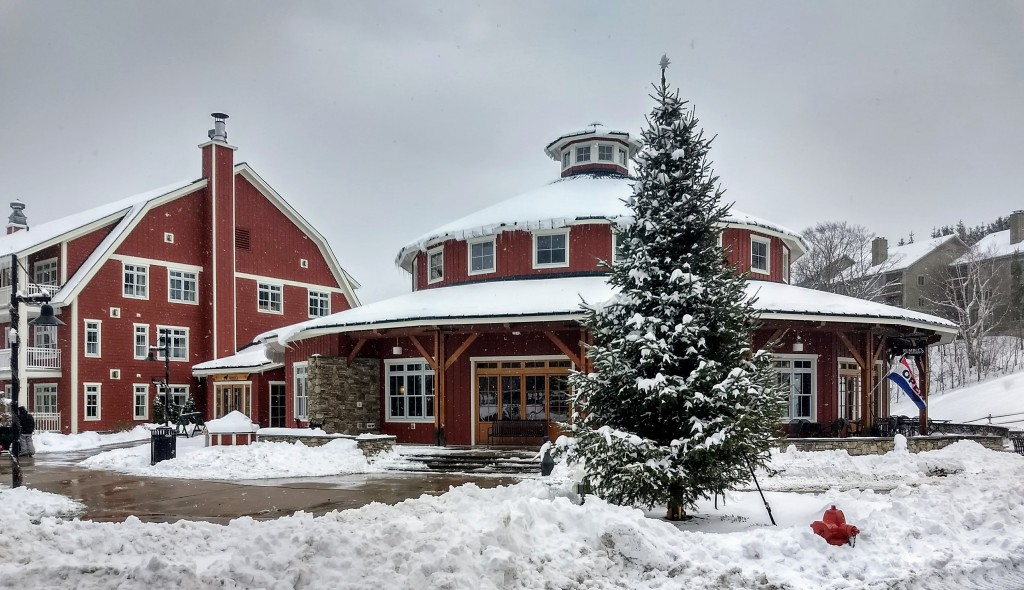 The (free) croissants at the Sugarbush Inn each morning are to die for, but for a killer buffet breakfast, head to Rumble’s Kitchen in the Clay Brook Hotel at the foot of Sugarbush. Come back for lunch or dinner and have the wings (probably the best I’ve ever had anywhere), lobster mac ‘n cheese or the pickle-brined fried chicken. Your mouth will never want to leave. For the best cup of java EVER, hit up Nomad when you get to Sugarbush; it’s a little standalone coffee hut in the village.

Après at Castlerock Pub with a huge selection of local craft beer and cider. If you feel like getting gussied up for drinks instead, there’s a cozy Relais & Château property close to Sugarbush called The Pitcher Inn. I strongly recommend the Bee’s Knees cocktail. 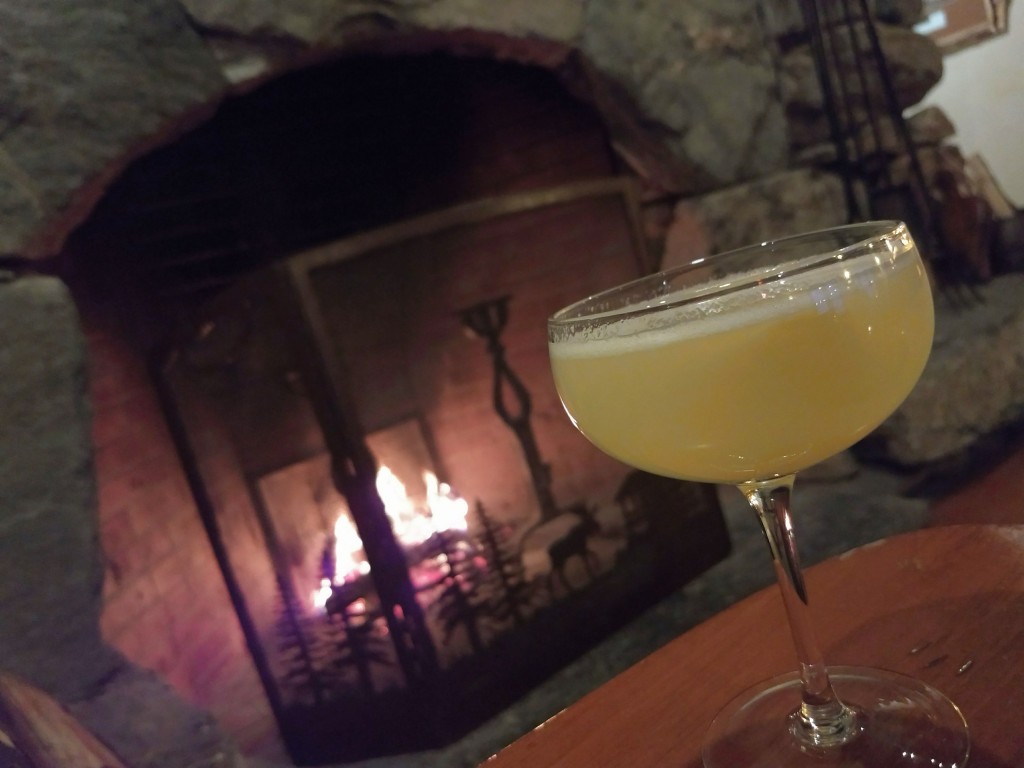 The Bee’s Knees cocktail at The Pitcher Inn, made with a local Vermont gin.

Not far from the resort is the Hyde Away Inn & Restaurant, with a long history in the area. They aren’t joking when they call the tuna tartare appetizer award-winning. If every taste bud of mine could have given it an award, it would have. The carmelized Brussels sprouts are sinfully good, too. Bring the kids who’ll enjoy a full kids’ menu and a play area in the back. 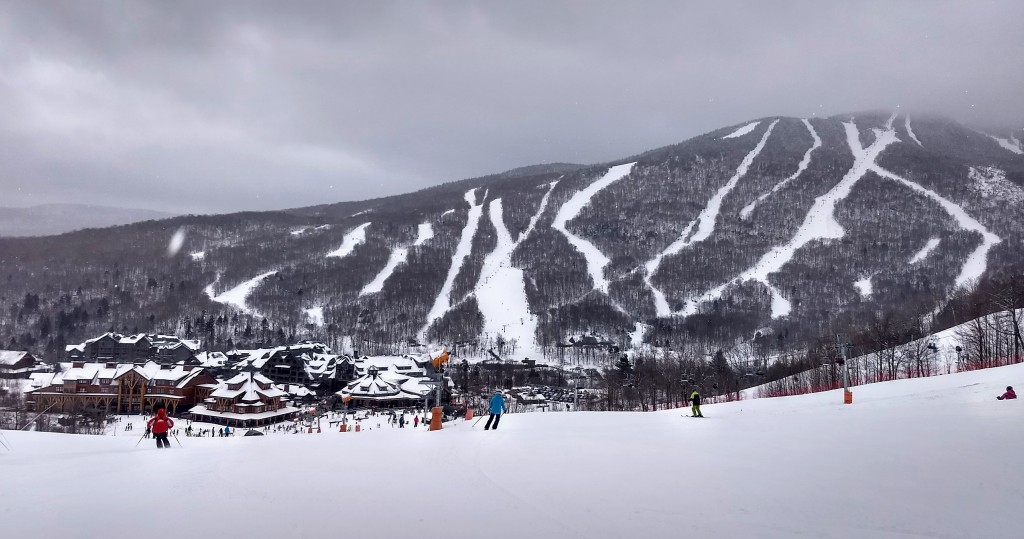 Side-slipping down Stowe’s easier mountain, heading toward the village below.

If you’re looking for the bigger Vermont version of Tremblant, you’ll find it at Stowe. The minute I arrived, I felt total familiarity thanks to its luxe village vibe. There’s even a gondola or two. There’s a lot more grooming here than you’ll see at Sugarbush so if corduroy is your jam, Stowe should definitely be on your list. There are two mountains here as well, with one being perfect for beginners and low intermediates.

From its 3,615-foot peak, you’ll want to try the Toll Road run, which literally follows an old toll road as you reach the base. It’s (very) long and winding and will give your thigh strength a run for its money, but it’s one of the most unique ski trails I’ve done to date.

Surrounded by a broader village that will accommodate all budgets, Stowe is brimming with après possibilities. Craft beer lovers should head to The Alchemist for its free tastings from Tuesday through Saturday, and one of the best chances at getting your hands on a four-pack of Heady Topper, which is often sold out everywhere in the area.

And for a cool microbrewery experience with some delicious nosh, Idletyme Brewing Company has awesome décor that can only be described as funky-meets-trapper. The Vermont cheddar fritters are sooooo good, and the “brewski” is literally a small wooden ski fashioned into a beverage holder that contains several samplers of beers that have been brewed onsite. 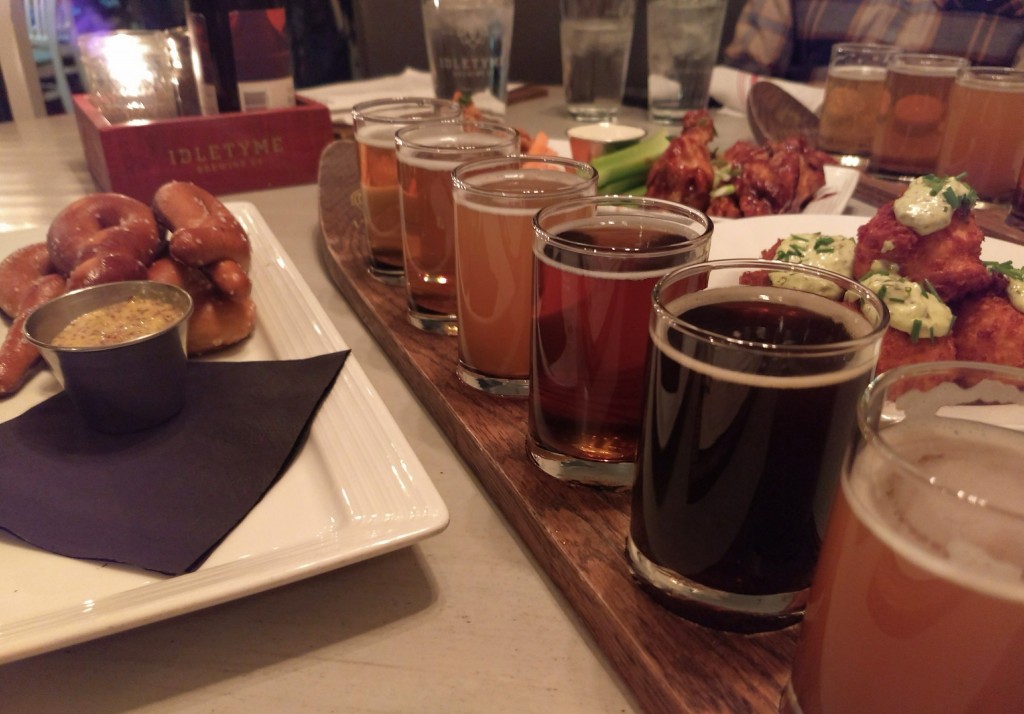 Check out my “brewski” at Idletyme!

Doc Ponds is the perfect setting for a family meal, and does a fine take on upscale pub eats with a complete kids’ menu. You’ve gotta start with the chips ‘n dip — which sounds much less exciting than what you’ll ultimately find placed in front of you — and end with the brownie & hot fudge sundae. But just one. Seriously, it’s enough for a family of four to share so just ask for four spoons! You can’t go wrong with whatever you put in between those two things, either. 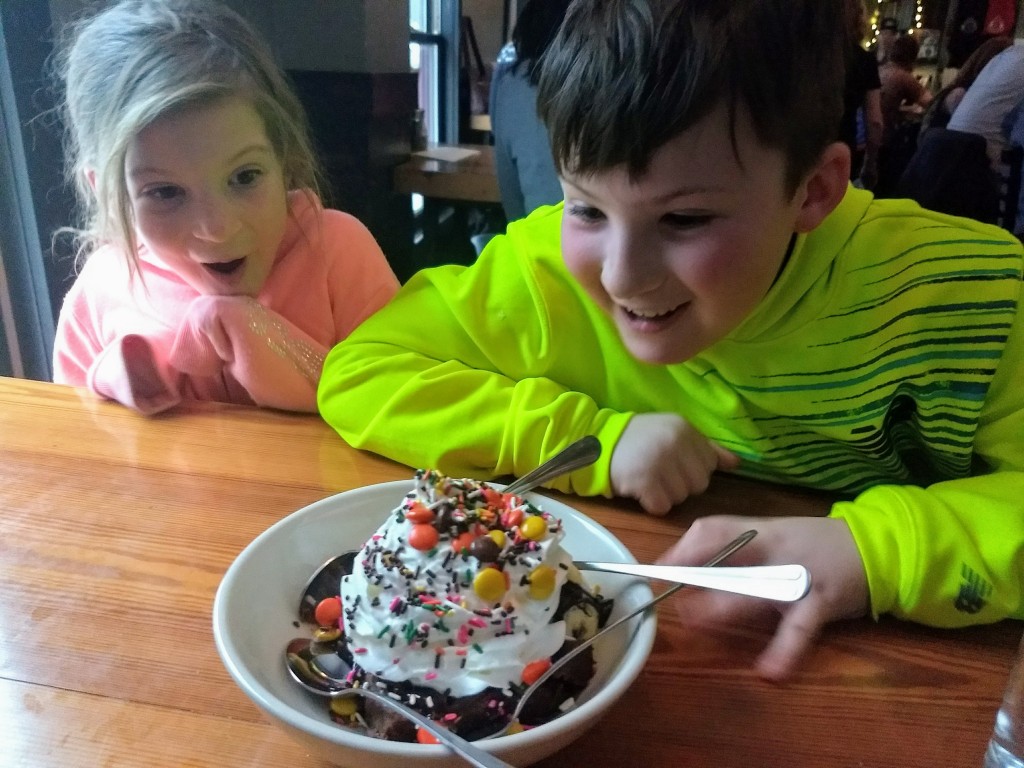 The sundae at Doc Ponds.

The name “von Trapp” probably either sounds at least vaguely familiar or elicits instantly warm, fuzzy nostalgia. The latter likely conjured if you’ve watched the Sound of Music since you were a small child, like I have. So heading to the Trapp Family Lodge and its sprawling estate known for the area’s best cross-country and snowshoeing trails is bucket list-worthy.

Owned by Johannes von Trapp — the 10th child in the von Trapp legacy,the third between Maria and the Captain, and the only one born in America — and managed by his children, Sam and Kristina, the Trapp Family Lodge experience must be savoured for days. Aside from the rich family history (you have to watch “The Real Maria” movie that has weekly showtimes in the main lodge), there are several restaurants and an entire brewery to tour. There’s even a namesake maple syrup.

You get the distinct feeling of being transported to Austria, and partaking in the family’s love of cross-country skiing is a must.  The trails are stunning, and I really enjoyed the solace in the woods; I also worked up such a sweat during my one-hour lesson that I ate and drank guilt-free all night. 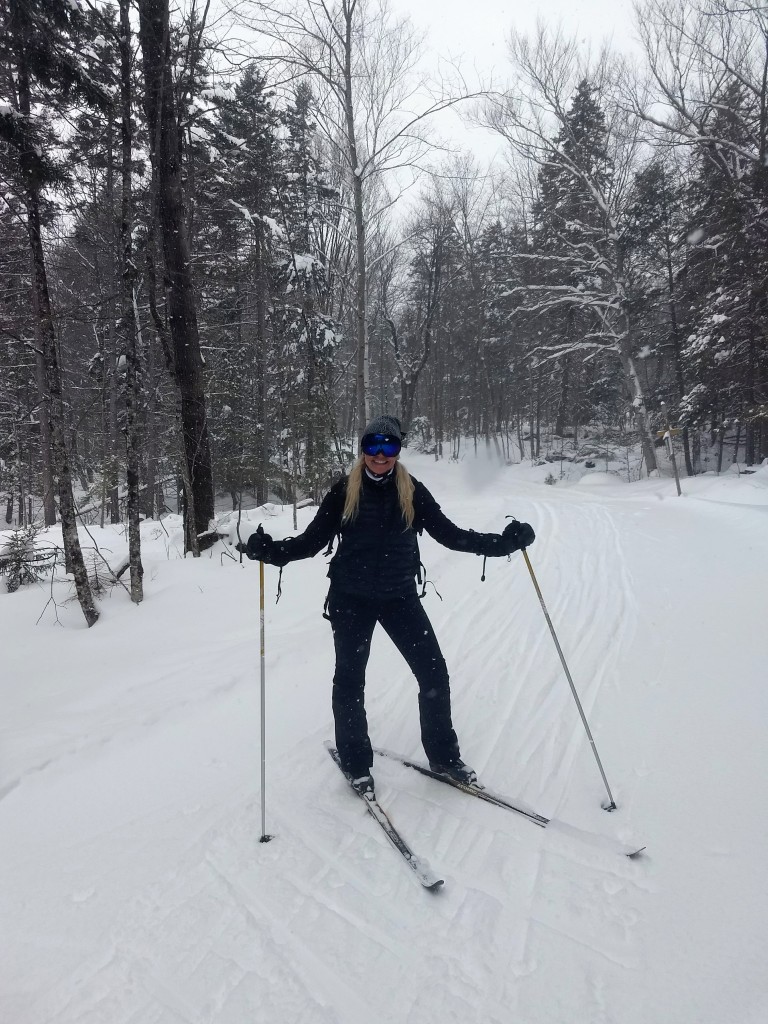 I hadn’t been on X-country skis since I was 8 years old! (Having the right gear from Peak Performance and Bolle Eyewear helped tremendously.)

And eat and drink, you shall! There’s no shortage of excellent food to be had. Breakfast sandwiches (for the same price as McDonald’s, which seems criminal once you taste them) are available at the Austrian Tea & Tap Room, which I hear will soon be renovated and reopen with a different concept.

Lunch and dinner needs to take place at the exquisite Bierhall; the lager cheese soup is enough to make me drive six hours just for another bowl! Shaved radishes may not sound exciting, but this fresh salad was light and divine. I’d been told by our host at Stowe that I needed to make the chicken schnitzel happen, so I did. Boy, he wasn’t kidding! It was an unforgettable texture and flavour sensation. And you know what? I’m not going to describe it any further because you just need to come here. Yes, NEED. 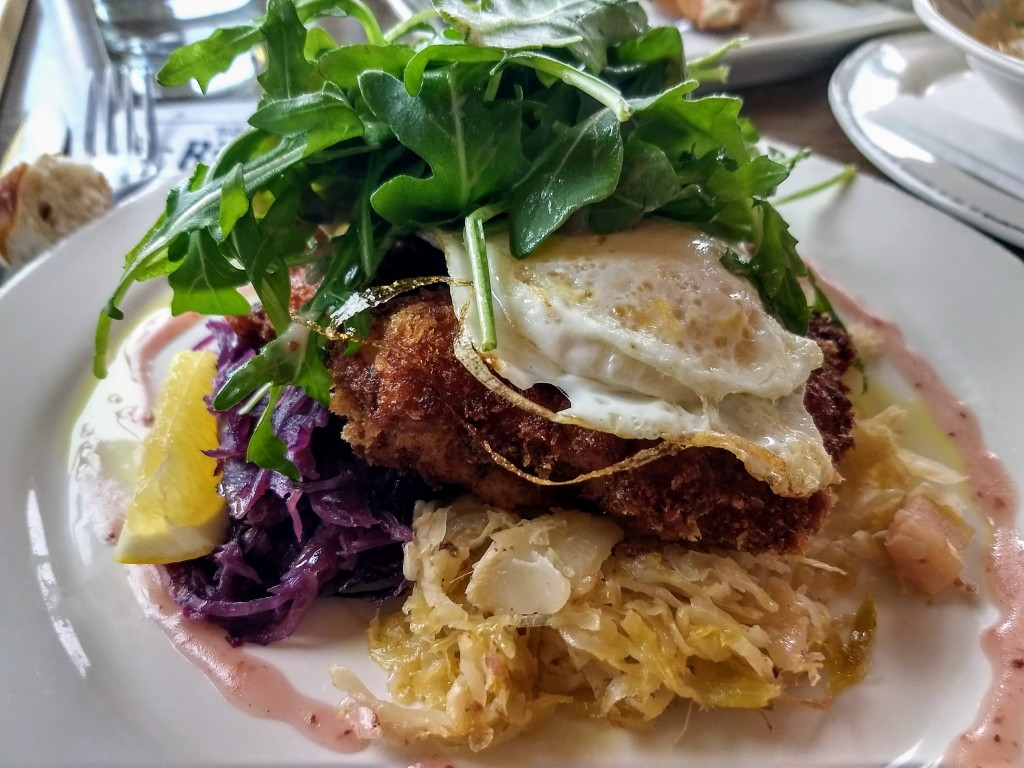 A must-have: the schnitzel at the von Trapp Bierhall.

I bought Big B the von Trapp Hellis beer while I was here, which is the first one Johannes made back when the brewery was a smaller-scale operation, and he loved it so much that he picked up a case to bring back across the border before we left — at the actual von Trapp Brewery, which was an hour’s drive from where we were staying once my family joined me in Vermont. My personal favourite was the seasonal Bock, a darker beer with really full flavour that had the kind of mouthfeel my beloved red wine has.

My family has had a mad love affair with Smugglers’ Notch for the last two years and my infatuation continues to grow. Even my once-hesitant ski child with separation anxiety willingly and happily attends ski camp here for days on end. 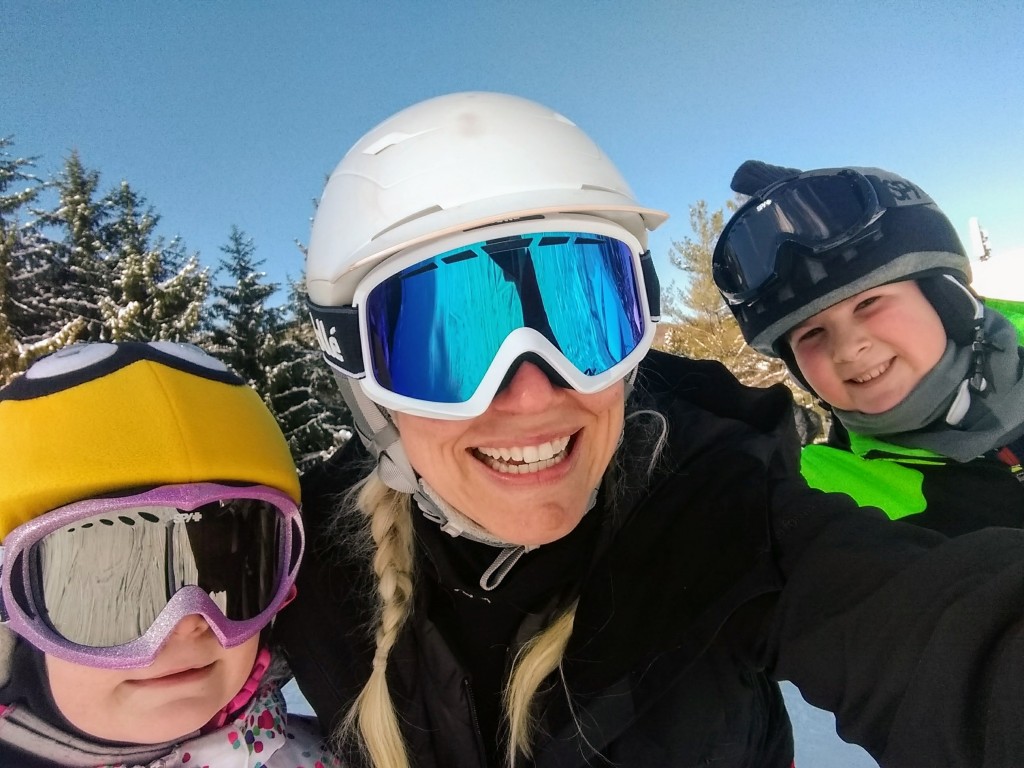 Skiing with my kids at Smuggs is the best.

There’s a kindness and comfort at Smuggs that’s not duplicated elsewhere, and then it also has some of the best terrain (for all ski levels) we’ve ever had the privilege of skiing on top of it all.

Made up of three distinct mountains, each with increasing challenges as you build your skills, Smuggs is rated the No. 1 Kid-Friendly Resort in the east by Ski Magazine just about every year because everything it does is created with families in mind. Like most of these Northern Vermont ski resorts, Smuggs was privy to the effects of several Nor’Easters in the past few weeks, dumping many feet of snow onto its trails. Combine that with heavy-hitting snowmaking when they need it and expert grooming, and you’ve got the perfect recipe for spring skiing. 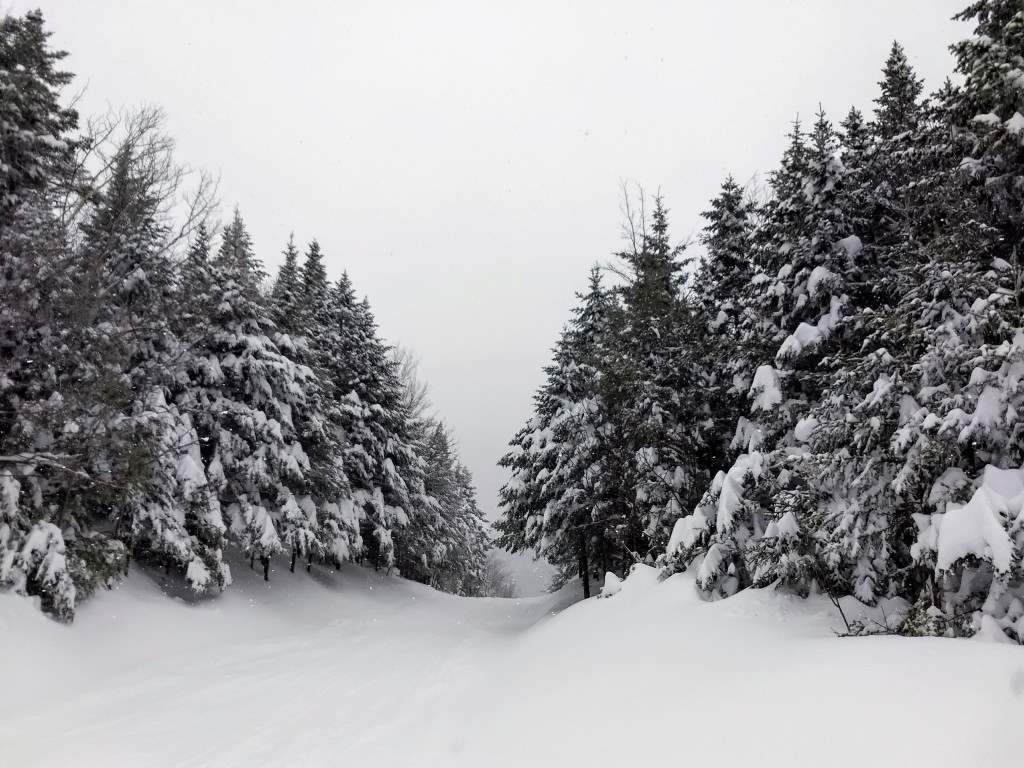 Lots of snow throughout March will make for excellent spring skiing in April across Northern Vermont!

There are lots of other things to do at Smugglers’ Notch, too, even if you don’t ski or board. Make sure you have lunch at The Grille at the base of Morse Mountain and enjoy chili in a bread bowl and take the free Resort Shuttle to the Brewster River Pub down the road for some delectable duck wings. Oh, and plan your stay around the Thursday night Carnival if you can. 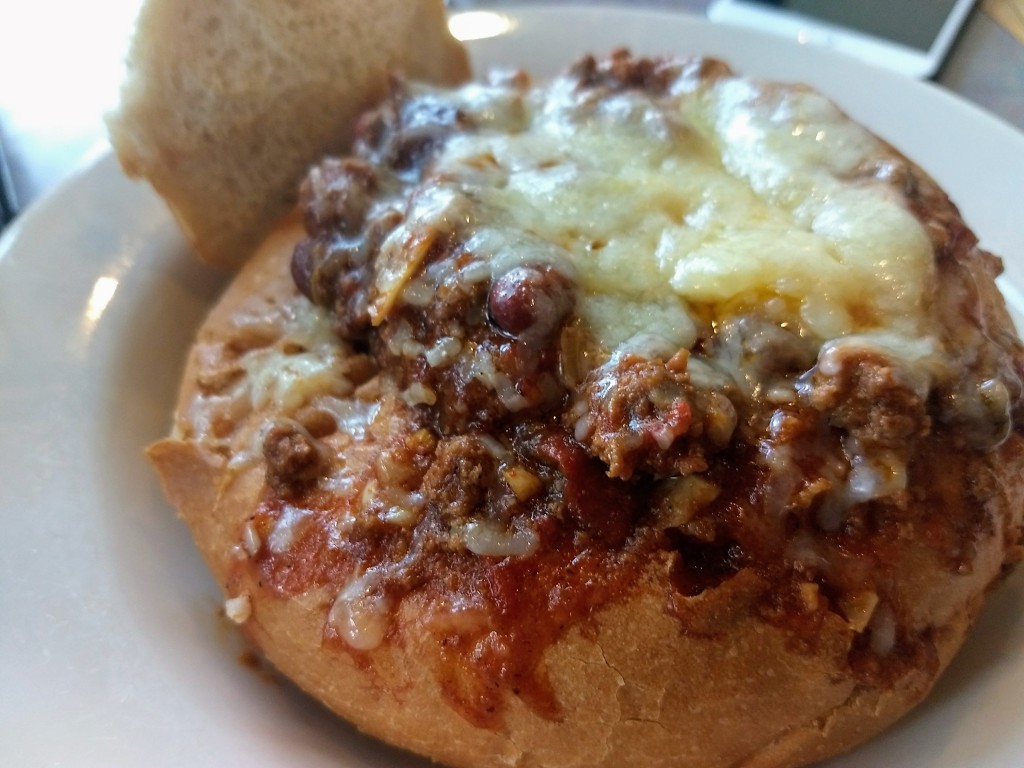 One of the best things on the menu at The Grille — the chili!

For more information about Vermont-area ski resorts, check out all of the resources available through Ski Vermont. 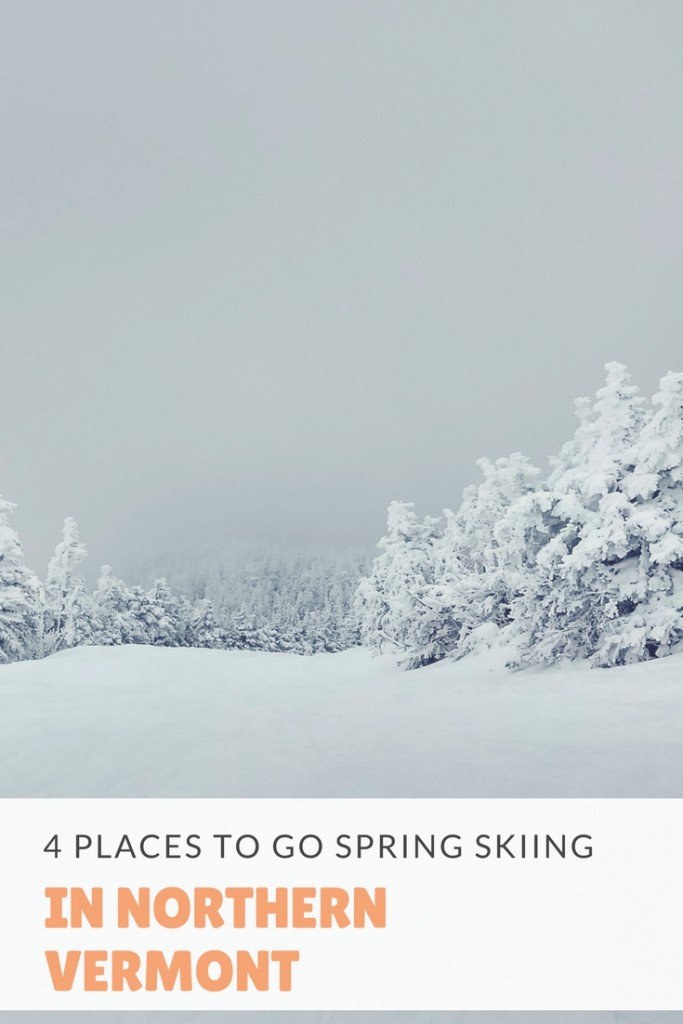 DISCLAIMER: I was a guest of Ski Vermont’s for a media trip that took us to Sugarbush, Stowe and the Trapp Family Lodge. As always, opinions are my own.