Both of my kids learned to drink from a straw really early. At least, I think six or seven months old is pretty early for straw use. (Don’t worry – they did loads of other things super-late to make up for it.) They just took to it immediately and it made the transition to a cup really easy because they just didn’t need the same level of co-ordination to tip a cup up to get liquid into their mouths.

The problem, however, is that using a real straw, even with a full lid, inevitably means that milk or water (or juice if you’re a juice house – we’re not, except on special occasions) is going to end up all over the place. Yes, yes – I know it’s a good learning tool and I know they are – according to the laws of BLW (baby-led weaning) – supposed to be introduced to open-top cups right from the start. But, honestly, I’m busy. Really freakin’ busy. And I already clean up everything else about 46 times a day. If I had four arms, perhaps I’d follow the rules.

Enter the straw sippy cup. In theory, it’s genius – all the ease of using a straw combined with the benefits of a sippy cup (non-spill, non-slip handles). The problem is that I have yet to find a version that actually doesn’t splash milk in every direction. As in splashing like spitting bacon grease every time you open the lid. Every. Single. Time. I shudder to think how much Baboo has been wasted all over my kitchen.

The worst offender to date is the Playtex-branded straw sippy cups. There are a few different versions, but I thought I’d focus on the Baby First Lil’ Gripper Twist ‘n Click Straw Trainer Cup because it’s the latest one I’ve tried.

The colour variety is nice, I guess.

The product name. Seriously, Playtex, do you really need 10 words – 10! – to brand your sippy cup?

It’s not leak-proof in the least. The issue is not the seal around the lid (which is the part that’s “guaranteed,” I’m sure). The issue is the straw. Here’s the scenario:

I find it odd that a starter cup holds anything beyond six ounces of liquid at most. Because liquids are, um, kinda heavy. Yeah, I get that I don’t have to fill it up entirely, but if it was shorter, it would be even easier for younger babies to manage on their own. 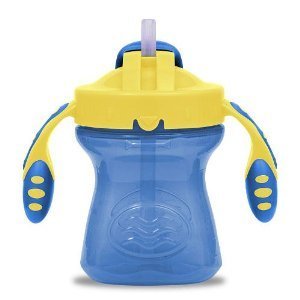 . I like thermal. But I won’t subtract points for this – just thought I’d point it out because Playtex makes some kick-ass insulated sippy cups. And they don’t leak. Nor will they squirt you in the eye.

It’s, like, nine bucks. Go buy yourself two bevvies from Starbucks instead. They are also unlikely to squirt you in the eye.

I think that’s enough. You get the drift.

So…where can you buy it (if you actually want to after reading this)?

« buggyguard: lock up your strollers!
The Unbelievabowl is really unbelievable »