Dayna Wilson is a stay-at-home mom who hails from Vancouver, B.C. She and her husband of five years have a rambunctious 18-month-old boy named Callum, and welcomed a little girl in February. Dayna has a wide variety of interests, and can usually be found singing in her car, playing video games or watching British dramas when not trying to keep up with Callum and his day-to-day activities.

Dayna received a set of pTunes Pregnancy Speakers in exchange for her honest review.

As I write this, I’m seven months into my second pregnancy, and there’s one refrain I’ve kept hearing from moms who have been there that rings very true to me: the second time goes by fast.

When I was pregnant with my son, it felt like I had all the time in the world to prepare, relax and focus on myself and the coming baby. I thought about my son constantly, and found many opportunities to bond with him while he was preparing to make his grand entrance.

One of the ways that we spent time together before officially meeting each other was through song. I studied classical voice in university, and have been a singer for as long as I can remember. I chose not to follow a career in music after completing my studies, but instead channelled my musical energies into Monday night. Each week, I’d go with a few friends to belt our hearts just for the fun of it, and it felt great. My son would kick away in my belly and it felt as though I was singing just to him. One of my favourites to sing was Fleetwood Mac’s “Songbird,” and to this day, I sing it as a lullaby to calm him down when he’s not feeling too hot.

Sadly, as is often the case with second children, my daughter-to-come has not been so lucky as to have the same musical bonding experience that her brother had. I haven’t made it to karaoke regularly since before my son was born, and only once since becoming pregnant again. Chasing after an extremely active toddler, combined with standard pregnancy exhaustion, just hasn’t left me with the energy to go out and enjoy music as much as I was able to in the past.

The pTunes Pregnancy Speakers gave me the opportunity to share my love of music with my unborn daughter, without slowing me down while parenting my son. 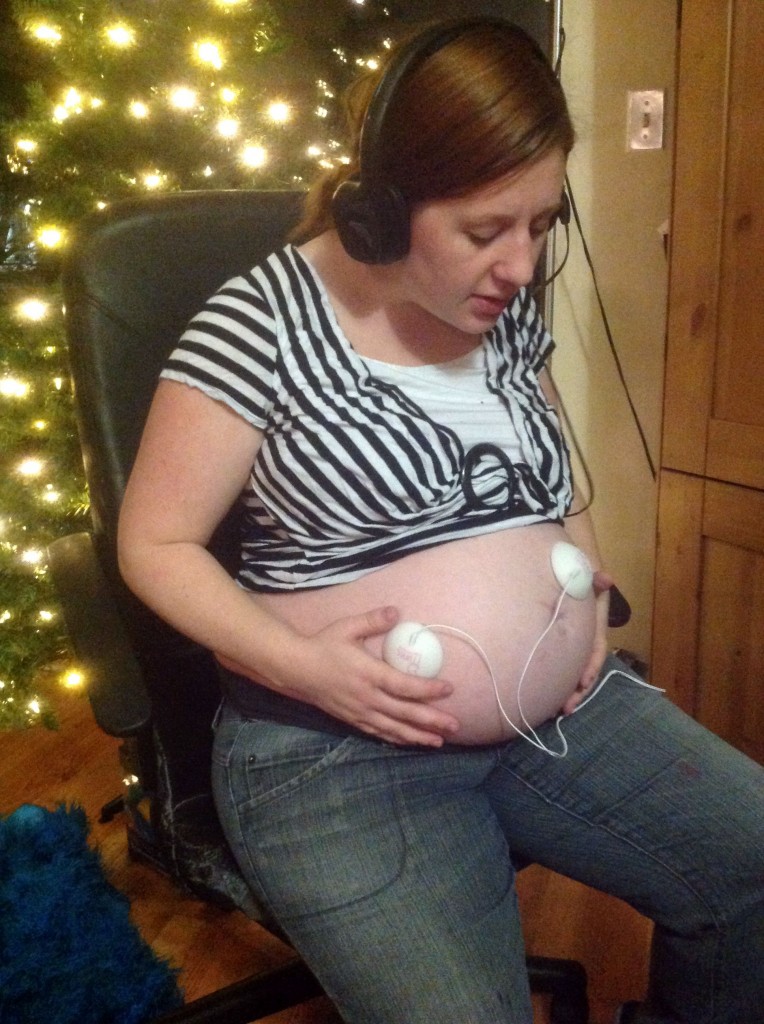 pTunes speakers are completely technophobe-proof. You can choose to either plug them directly into your headphone jack, so that only the baby is privy to the music, but they also come with an audio splitter so that both mama and baby can listen in. It’s no more challenging to set up than plugging a pair of headphones into an MP3 player, and when you’re suffering from pregnancy brain, that’s a bonus.

My favourite thing about the pTunes speakers is that it was obvious immediately they work. Within a minute or two of starting the music for my daughter, who had previously been quiet, she was kicking up a storm. After a while, it almost seemed that she was kicking in time with the rhythm of the music! Each time I plugged the speakers up to my belly, a noticeable difference in activity level was evident, and it felt so cool to be interacting with her.

The other really good thing about the speakers is because of the sticky rings that attach to your stomach, you can move around a little bit and do some sweeping or toddler wrangling while wearing them. They even include a pair of replacement rings in case the first pair wear out.

And wear out they will. Those sticky rings are unfortunately not that long-lasting. I found that the adhesive effectiveness wore off within a few uses of the product. This isn’t the end of the world if you plan to use them while just sitting at your computer, like I did, but if you were planning to engage in some sort of light exercise, like jogging (you ambitious pregnant woman, you!), they won’t last long. Yes, a second pair is included, but still, you’ll burn through them fast.