Like just about everything in my life, I own multiples when it comes to ski helmets. It’s like I can’t help myself because I want to try out all of the special features that come with one but not another. So when my husband showed me the integrated Ruroc helmets, we knew we had to review them. And thus begins my Ruroc helmet review… 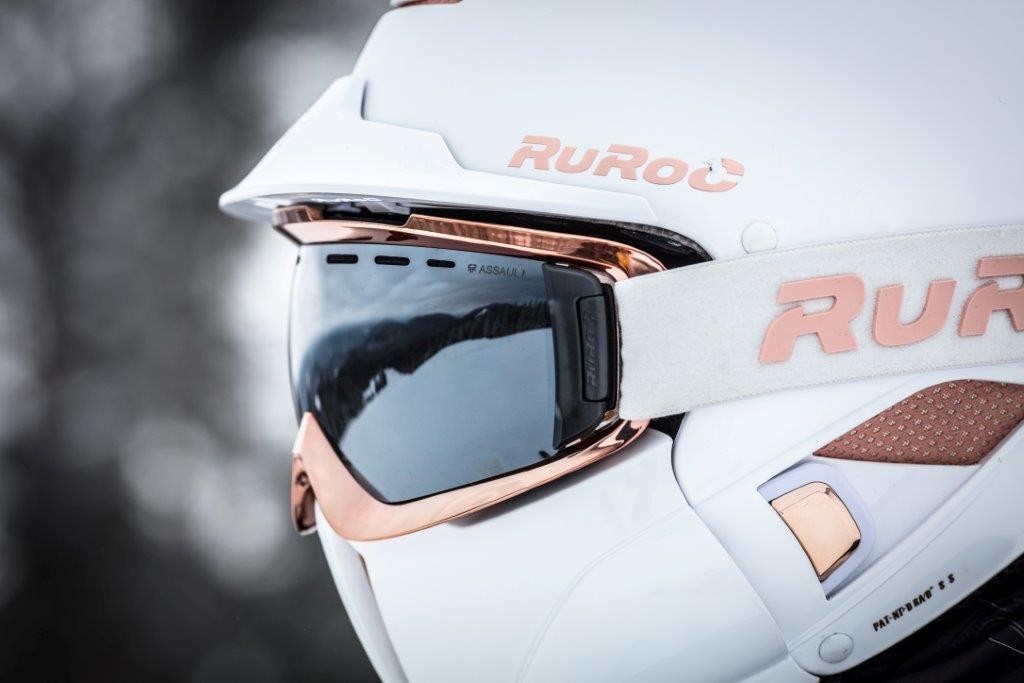 If you like the bold Storm Trooper look, you’re going to love cruising down the slopes in a Ruroc helmet. It gets noticed. Everywhere. We haven’t been on a hill or chair lift yet where someone asking what it is, what it’s like, how much it costs and where to get one. I feel like all we’ve done this ski season is talk to strangers about Ruroc! It’s an easy conversation starter and you’ll be turning heads, so be prepared for a lot of extra chit chat.

Having an integrated system is pretty cool. Nothing shifts and the Ruroc goggles don’t fog up (unless, well, see gaffes…) once everything is fitted together. There’s a little trick to making sure the goggles are snug, which you can see in this video if you’re having any trouble.

It doesn’t appear light, but it is. I would be a total wimp about it if it felt heavy on my head and neck. I have skied for hours in it, for days at a time, no problem.

It’s very easy to get the face mask on and off with bare hands or with very snug-fitting gloves. You’ll find it impossible with mitts, though. 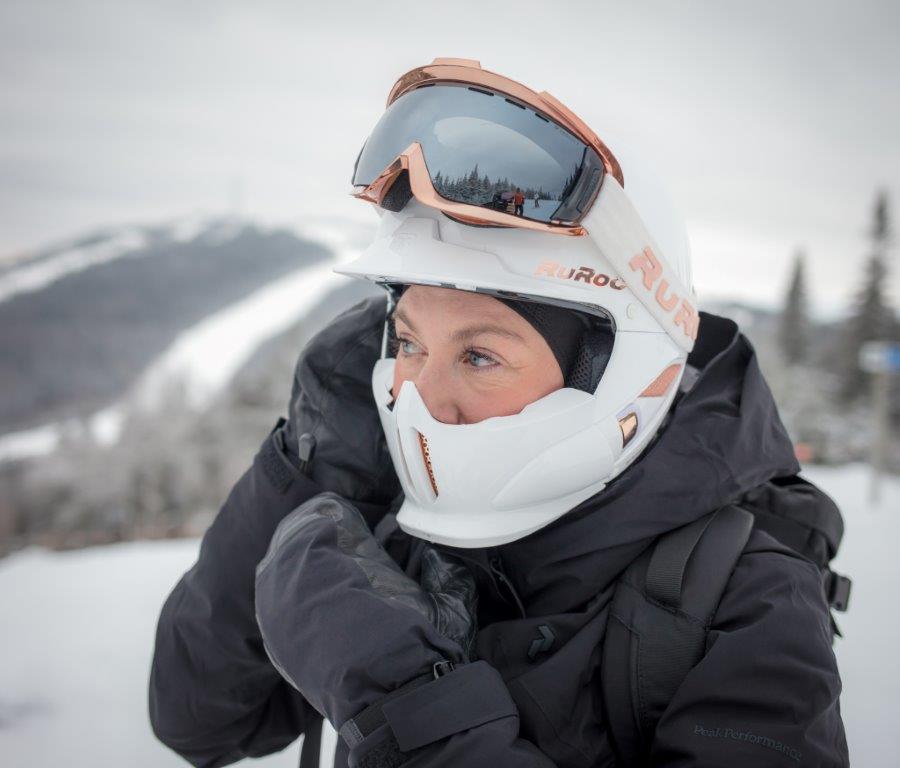 It’s not happening with mitts. Trust me on this one. (Photo credit: Daniel K. Cooper / Ski jacket and backpack: Peak Performance)

Ruroc is EXTREMELY responsive via Facebook Messenger. Within minutes sometimes. Probably the best of any company out there. I definitely recommend contacting them this way for any customer service issues, product questions and so on. They are very committed to positive customer service experiences and I have no doubt will move mountains to make sure their customers are happy.

I feel really safe in my Ruroc. There is no other helmet I’ve owned that’s fit with so much precision and has made my noggin feel like it’s really being taken care of.

But if I did have a tumble… there’s a crash replacement insurance option when you purchase your Ruroc helmet. It’s only $16 and you add it to your cart as you’re shopping. This means that if you’re in a crash, your replacement helmet is 50 per cent off. Remember: even if your helmet doesn’t look like it’s been impacted, you really need to replace it after a collision. 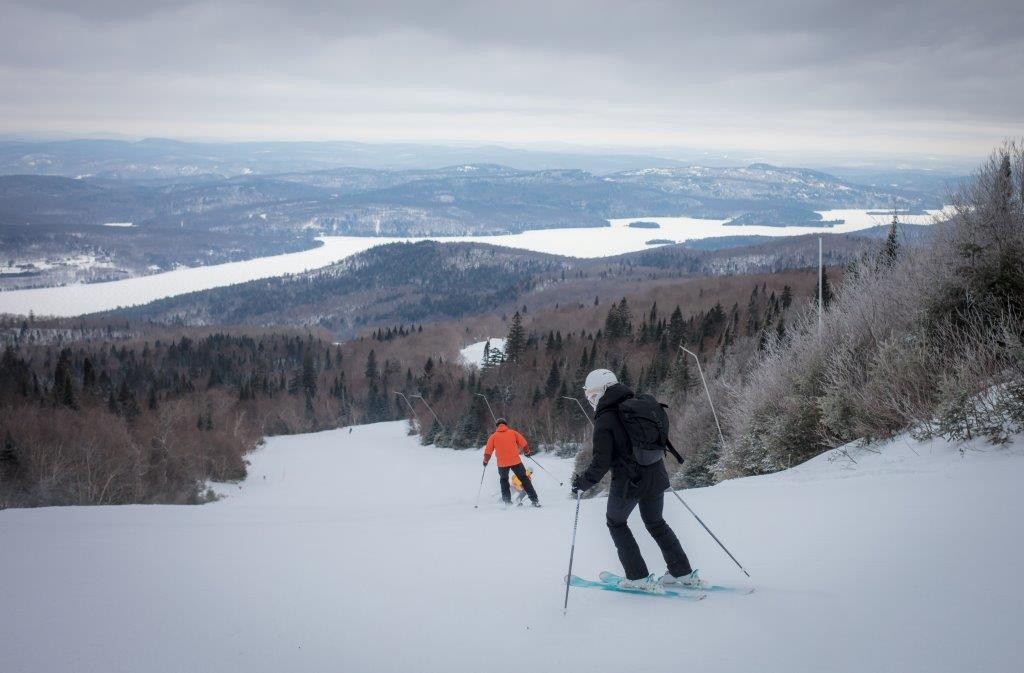 As seen in Mont-Tremblant! Glad to note that we have not crashed, but it’s good to know Ruroc has me covered. (Photo credit: Daniel K. Cooper)

I really like the super-snug fit of my Ruroc ski helmet. It feels more like a helmet you’d wear on a snowmobile or motorcycle. Both Big B and I used the sizing guide video and it delivered, spot on, the sizes that worked for us.

What didn’t work in terms of size was my face mask. Big B’s was fine but the face piece that came with my size small helmet smushed my face in so hard I’d probably turn into a pug if I wore it for any length of time. Easy fix: Ruroc customer service to the rescue. I actually mentioned this to Ruroc’s road show team at the Toronto Snow Show and they simply told me to contact Ruroc through Facebook or email and they’d send me a bigger one for free (and they didn’t know I was partnering with Ruroc). The medium face plate arrived a week or two later and it fit perfectly.

As I mentioned, it’s damn near impossible to clip the face mask in and out without taking off your mitts, especially if you wear thick ones like I do with liners underneath. This in and of itself is not an entirely unmanageable thing, but it would be made so much less annoying if once you remove the mask, it could dangle from your helmet. But it’s either on, or off. No dangle option. So forget about taking your mask off on a chair lift for fear of dropping it, and forget about taking it off unless you have somewhere to rest it. To me, this is an easy fix with some kind of silicone band on one side that would keep the mask attached while you want it temporarily removed.

Ruroc bills itself as fog-proof. And I found this to be true as long as you didn’t have a balaclava liner underneath, or a neck gaitor pulled up over your mouth. So on warmer days when you don’t have wind chill with which to contend — YES — you will stay beautifully fog-free. Now, if it’s really cold and windy, you’re going to feel it inside that helmet no matter how much coverage it appears to give. I have tried every combination possible to stay warm underneath and the only thing that works is my super-thin Peak Performance balaclava. But as soon as I pull it up over my mouth and/or nose, my Ruroc goggles start to fog. And then, of course, the fog freezes inside your goggles. One bitterly cold -28 day (that felt like -45) at Tremblant this season, they fogged and froze so much part way down a run that I had to remove the goggles and ski down six kilometres without them. My lashes froze but at least I could see. Another time, I could tell they were about to fog, so I quickly pulled my balaclava down off my face before whipping down a beautiful run, which took about 15 minutes. I ended up with frost nip on my nose and couldn’t ski the rest of the day. Not ideal. So my Ruroc helmet is reserved for warmer days and those without windy conditions. And before you ask, yes, I had the goggles synced with the helmet and the mask perfectly; this was something I practised and perfected indoors before ski season even started.

While my peripheral vision is very good side to side, looking WAY down with a Ruroc helmet on is a challenge. You need to crane your neck much more than usual (with other goggles that aren’t part of an integrated system) to, say, see where your skis go to lock into your bindings.

The “peak” on Big B’s helmet comes off sometimes, which is not super convenient when you’re trying to put your goggles up for, like, a chair lift ride.

I’ve saved the worst for last, and that’s the duty and brokerage charges levied by both the Canadian government and UPS (Ruroc’s courier of choice). We were met with a shocking C.O.D. bill of $226 when our first helmet was delivered.  UPS told me this was because the waybill was coded in such a way that it appeared I was RE-SELLING the helmet here in Canada! Um, nope! Keep in mind these are $500 helmets to begin with, so it’s gonna hurt if you’re having these delivered to a Canadian address. And that was just when ONE helmet was delivered! UPS tried to charge me another $226 when the second helmet arrived a day later, and I had to refuse the delivery and nearly bust into fisticuffs with UPS’s customer service. That latter charge was eventually dropped but we were still out the first $226. Ouch.

I’ve taken out the outrageous $226 duties before rating the Rurocs, because it’s technically not the product’s issue itself:

DISCLAIMER: Ruroc provided ski helmets for review purposes. This never influences my opinion one way or the other.