The K Man stopped motion sleeping when he was about three weeks old. For real. No more long car rides with a peacefully slumbering infant; no more liesurely strolls, winding through shops and bakeries.

He slept in his crib, and that was that.

Nighttime was rarely an issue (save for a couple of blips). Daytime sleeps, on the other hand, were finicky. His Royal Highness demanded a room so dark I taped garbage bags to his bedroom window, and a house so quiet that I bought a white noise machine, took the phone off the hook during naptime and never allowed anyone to flush toilets or walk on the second floor while he slept. But he slept and – as you know – that’s all that mattered.

So I was always a little jealous when I’d see parents out for a walk with a light blanket draped over their sleeping babes. Although I generally advocate for naps in a proper bed (since motion sleep isn’t very restorative), there are occasions when it would be nice to walk or drive through a nap. Say, on the way to Niagara Falls when your baby who hates being in a car seat is being especially, um, special.

Enter my second child, who is a sleepaholic. She really didn’t wake up for the first four months of life. Ask my neighbours, and they’ll tell you they barely saw Miss Q until she was closer to eight months old because she was usually in bed. She’s 19.5 months old and still takes two naps a day. I never worry if we’re out during naptime because if the girl’s tired, she just falls asleep – in the car, in the stroller, in the carrier or in someone’s arms. (Yes, we are aware that she is a dream child and we are blessed. Don’t worry, she has her faults – she’s a biter, a pincher and an aggressive thrower.)

But she’s like her brother in that she sleeps even better in complete darkness. Her naps are longer and she rises happy, smiling and raring to go rather than with that somewhat confused Hey-where-am-I-and-how-did-I-get-here? look.

Lately, however, Miss Q’s interest in the world means she tends to take only cat naps if we’re out and about. When I discovered the SnoozeShade, I wondered if applying the Darkness Principle to stroller sleep would help. Between the wonderful mompreneur, Cara Sayer, who invented this cool contraption and her awesome North American distributor, Joe, I received both the TWIN ($70) and the PLUS ($60) SnoozeShades to try out. And a couple more to give away! Can I get a woot, woot!?

I’m not putting the price of these into either section below because this is one of those products that I can’t calculate price-per-use for you. Only you know how often you’ll be out strolling at naptime. If you’re doing this really infrequently, it probably doesn’t make sense to fork out upwards of 70 bucks; but if you do it once or twice a week, it’d probably be a good investment.

Holy Batman, it’s dark under there! I popped my head under the first time I threw the SnoozeShade TWIN over our EasyWalker DUO. We were at the Ontario Science Centre under some pretty bright lights. Since I’m no eye-ologist and I’m not trained to calculate lighting percentages, I can’t report for certain that 95 to 98 per cent light-blocking claim is 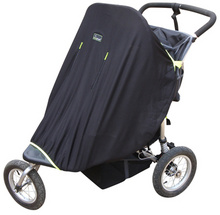 I can’t express how giddy it makes me to have a zipper at the top of the SnoozeShade to discreetly peek in on my sleeping beauty. B.S.S. (Before SnoozeShade), I had to open the Velcro-guarded flap at the top of the stroller to check on Miss Q, which created that wonderfully noisy ripping sound and – at times – woke her. A.S.S. (thank goodness for punctuation!), I just peer through the slit at the top with a quick, quiet zip.

The packaging says “one size fits all” and it’s really true. I tried them on multiple strollers and I didn’t find one they didn’t fit. Just be sure that if you have a twin stroller that is, in fact, a front-to-back stroller (like a CitySelect) versus a side-by-side (like a CityMini Double), you order two SnoozeShade originals or PLUSes. A TWIN won’t work.

Although I didn’t test them, I have to point out that the company makes a car-seat version and a pack ‘n play SnoozeShade. Hello! Maybe your baby will nap outdoors in the fresh air? Having lived in the UK, where the SnoozeShade was born, I know firsthand that taking a “cot” outside is pretty commonplace. We just don’t seem to do it very much over here across the pond. But you should try it; babies sleep so well in the fresh air, which is what’s so great about a stroller nap, but you get the added benefit of non-motion sleep. You can also use the “cot cover” for sleepovers at hotels and people’s homes who don’t have any blackout blinds to speak of. 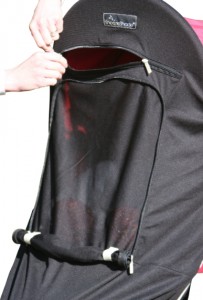 The PLUS version, which was designed with older babies in mind, has this extra zippered window that lets a toddler who’s awake look out into the world but still be protected from the sun (and light rain and wind, too). Here’s why I’m having a bit of a love affair with this: you’re walking along close to nap time but your baby is having NONE of this reclining and lying down business; the SnoozeShade is already on the stroller, so if she passes out, you just zip up the window to achieve that near-total darkness. With the other versions, if your baby falls asleep without the SnoozeShade already on the stroller, I would advise against trying to get it on, unless your babe is impervious to noise. There are about a million Velcro closures to get a customized fit on each stroller – OK, maybe more like six or eight – so it’s going to be rip, rip, rip, rip…you get the picture.

MACHINE WASHABLE!!! Just be sure to close all those Velcro straps before you toss it

It’s got a good ol’ PTPA Seal of Approval. And you know how much I like that.

Overall, great quality. I’ve used other sunshades that just felt like cheesecloth. This has some weight to it, is put together really well, and has industrial-strength Velcro tabs. You can be sure this will last through all of your kids. Unless, of course, you’re the Duggars.

My tall 19.5 month old isn’t going to be able to fit under the SnoozeShade much longer, unless she starts crossing her legs. There’s definitely more slack using the PLUS model, but her toes are already touching. There’s no way she’ll make it to four years old, as the website notes.

It’s to be expected, but it gets a bit warm under there in this hot weather. It’s breathable to be sure, but I definitely notice a difference in temperature.

You know how when you get something new in a box, and then you take it out and discover it’s not quite right and you try to get it back into said box and it never really goes back in the way it came out? Well, while I love that each SnoozeShade comes with its own travel pouch, I find it just slightly on the small size. I’d love an extra inch in each direction to make stuffing my shades in easier. As it stands, I have to fold them military-style to feed them back in. I really just want to stuff. I’m busy. And lazy.

The PLUS option is only available for single strollers. I bought a double stroller because my kids were older and big and they preferred sitting side by side. They don’t want a cover overtop of them that they can’t see out of.

Thank you, Pampers & the search for more corporate donors
Symphony in B. - or - quite possibly the best toy we've ever had
Babiators (mini review)