Is there anything more divine you can make with sourdough discard that intertwines comfort food and dessert better than sourdough cinnamon rolls?

When you’re looking for sourdough discard recipes, you’ve found my personal favourite right here. It’s not the fastest recipe in the world, but it won’t take two days like some of the cinnamon roll recipes out there and it’s worth the effort. Promise.

These are probably more buns than rolls in the most traditional sense, but no matter what you call them, get ready for flavour country. 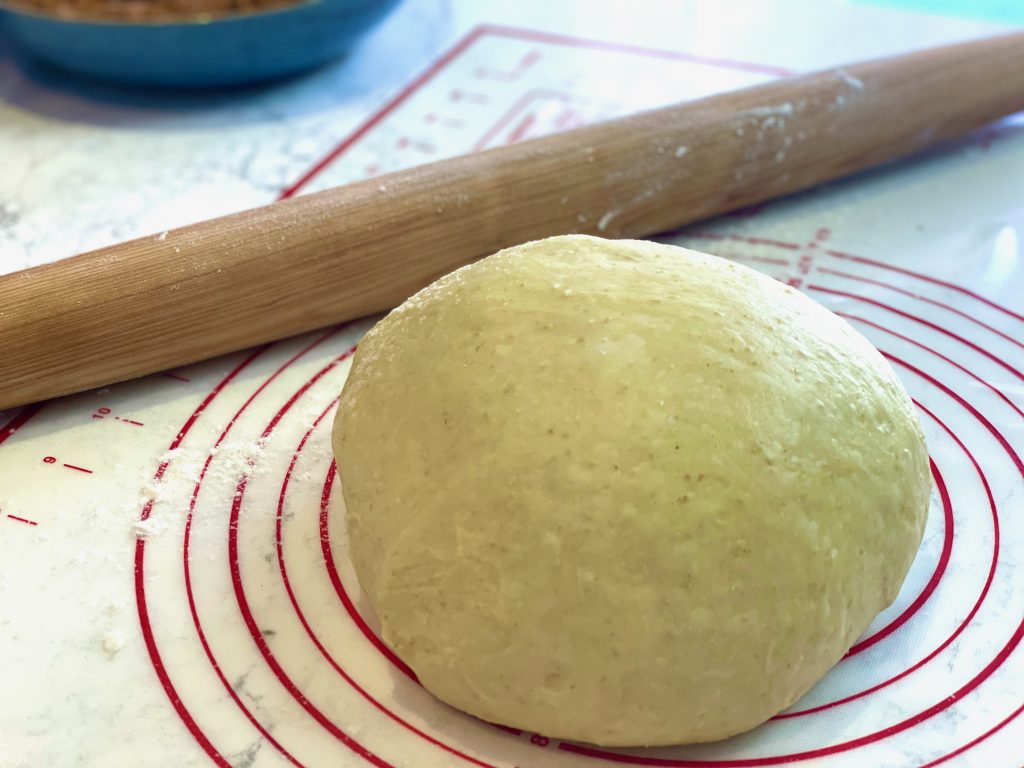 What you’re about to make are probably better described as sourdough discard cinnamon buns because they’re so big and thick and pull apart like a dream. (Photo taken with the iPhone 12 Pro)

Sourdough discard cinnamon rolls start with the most important ingredient for making these chewy and longer-lasting on your countertop: sourdough starter discard. If you don’t have any of that, you’re going to need to back up a few steps and give yourself a week or two.

So, if you already have a cup of sourdough discard ready to go, skip this first part. If you need to embark on a discard journey of your own, start here:

Before you dive in, I feel like I should issue a warning. My husband says these are better than Cinnabon. I don’t know the calorie or fat/sugar count on these (and I don’t wanna know), but your loved ones will consume them at an alarming rate if you allow it. Consider your family and waistline warned.

I use a KitchenAid stand mixer, but this will work with any stand mixer provided you have the attachments listed below. I’m sure you can pull this off with straight-up elbow grease, a bowl and wooden spoon — along with some kneading — but I am far too lazy to have tested out that method.

In addition to the stand mixer and its bowl, you’ll also need to pull out:

First step: the dough. Because you’re using sourdough discard and not active sourdough starter for this recipe, we need to add some yeast. So this is actually in two parts, starting with proofing your yeast.

In a small bowl, stir and dissolve the sugar in the water using a fork or small whisk. Add the yeast and stir gently but thoroughly. Cover with a tea towel for five minutes, then check to see if it’s bubbling or foamy. If it is, it’s ready to use in the next step. If not, cover for another five minutes. If there’s still no activity after 10 full minutes, your yeast is probably dead. Get some fresh yeast and start over.

1. Using the paddle attachment in your stand mixer, cream the butter and sugar together until light yellow and “fluffy.”

2. Add eggs one at a time until each one is incorporated.

3. Add yeast mixture, sourdough discard and buttermilk and mix until blended. (Note: if your eggs, discard and/or buttermilk are too cool, you may find your butter hardens and you’ll have little balls of butter in this mixture. Don’t worry about it too much; it will come together later!)

4. Scrape down sides of bowl with a spatula and switch to your dough hook.

5. Add flour and salt, keeping extra flour nearby just in case. Knead on “stir” speed with dough hook for at least 3 to 4 minutes. If you have any dough sticking to the bottom or sides of your mixing bowl, add more flour about a tablespoon at a time and give it a good 45 seconds before assessing whether you need more. Dough must pull away from bottom and sides before proceeding to the next step. 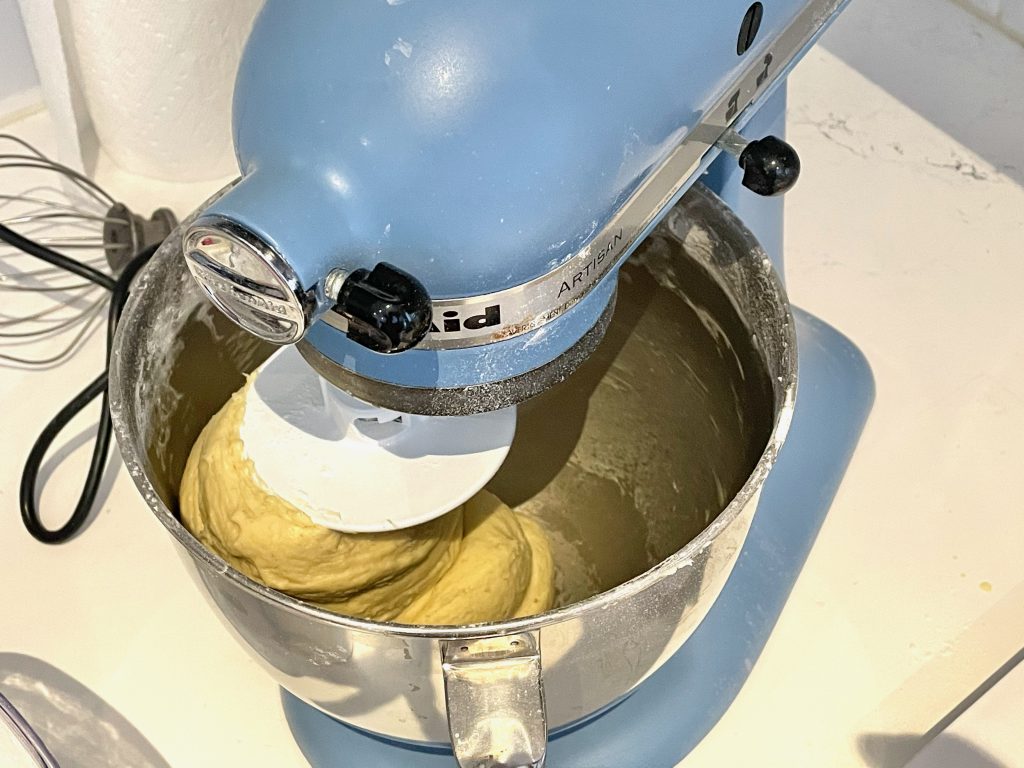 Looking for a great cinnamon rolls recipe? You found it. And it won’t take two days. Just be sure your dough pulls away from the sides of your bowl completely before you continue with the recipe. (Photo taken with the iPhone 12 Pro)

6. Drizzle some avocado oil in a large bowl and use your pastry or silicone brush to evenly cover the bottom and sides.

7. Gently remove dough from hook/bowl and place it in your oiled bowl.

8. Cover with the tea towel and let it rise in a warm, draft-free area of your home for one hour. 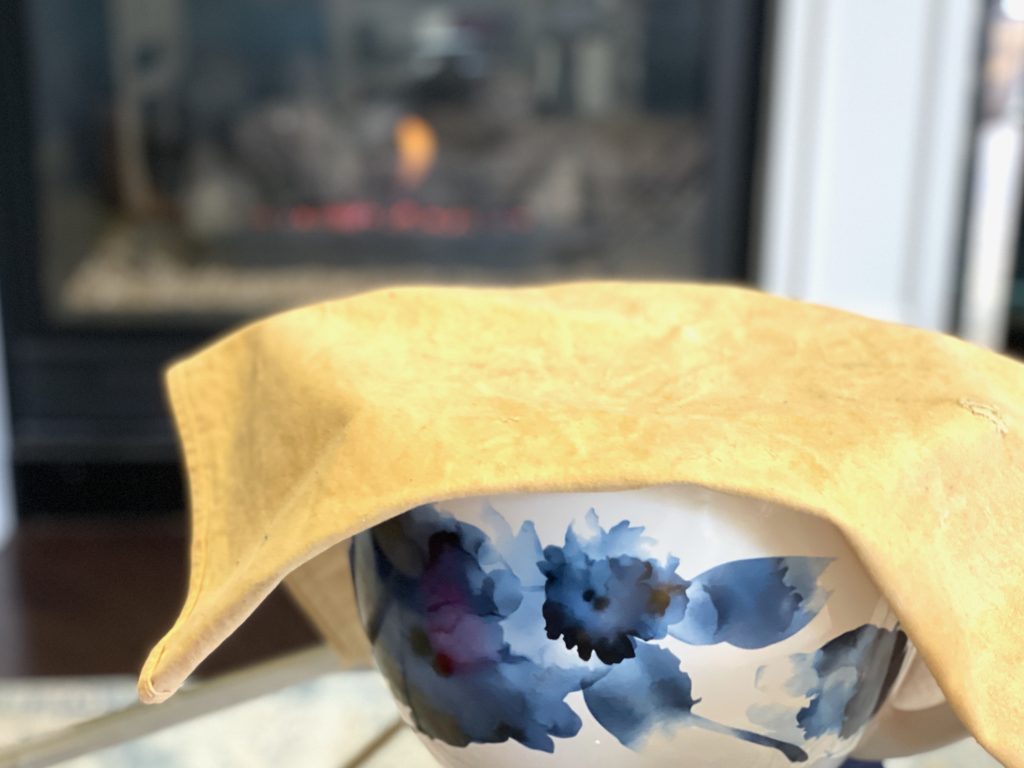 I let my dough rise a few feet away from our fireplace. (Pro Tip: Since this recipe uses discard, these cinnamon rolls with yeast will take less time to rise than a yeast-free version.) [Photo taken with the iPhone 12 Pro]
9. At the one-hour mark, do one set of stretch & folds. (If you don’t know what a stretch & fold is, I demonstrate it in my easy stand-mixer sourdough bread recipe video at the 9:45 minute mark.)

10. Re-cover with tea towel and let rise for two hours or until dough has approximately doubled in volume. Depending on your home’s temperature and humidity, this could take less than two hours or even up to four hours. Be patient.

When your dough is starting to get close to doubling, you can make the filling. Don’t even think about turning on your oven yet. 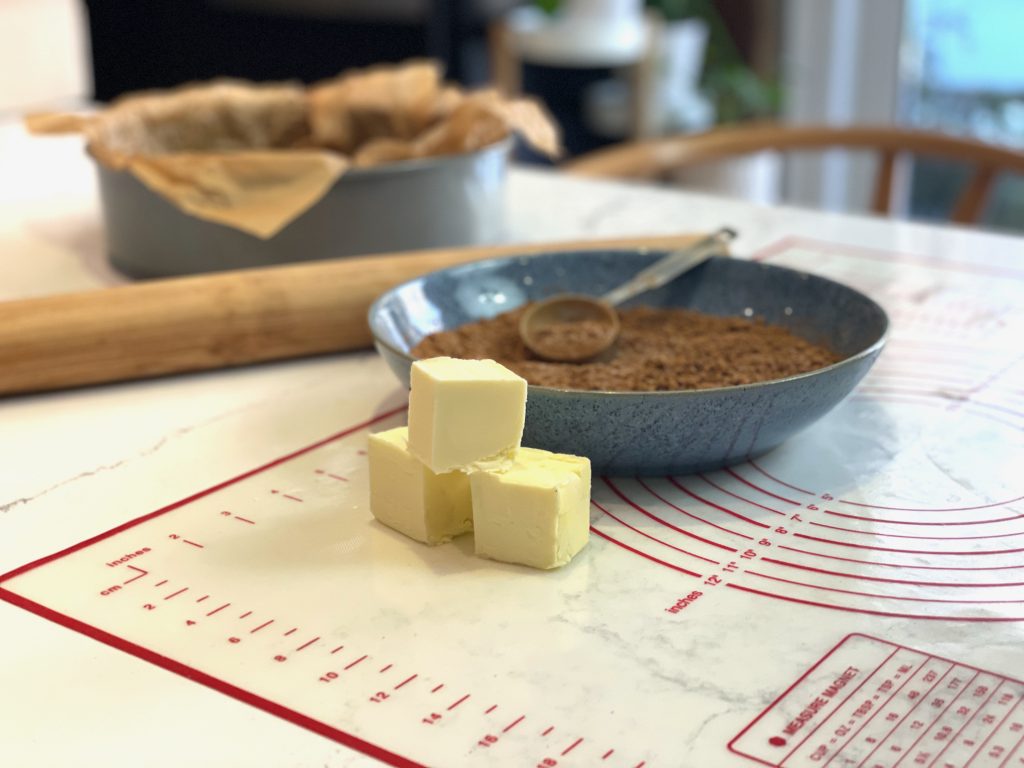 This is the best cinnamon bun filling because it’s heavy on the cinnamon and not too sweet. (Photo taken with the iPhone 12 Pro)

1. In a medium microwave-safe bowl, microwave your butter in short bursts until completely melted.

2. In another medium bowl, mix your sugars and cinnamon together with a fork, removing as many lumps as possible.

3. Set butter and cinnamon-sugar mixture aside until dough is ready.

4. When your dough has doubled, gently punch it down a bit with your fingertips before transferring it to your large silicone mat or clean tabletop (I don’t recommend using just your table or island unless it’s a stone surface). 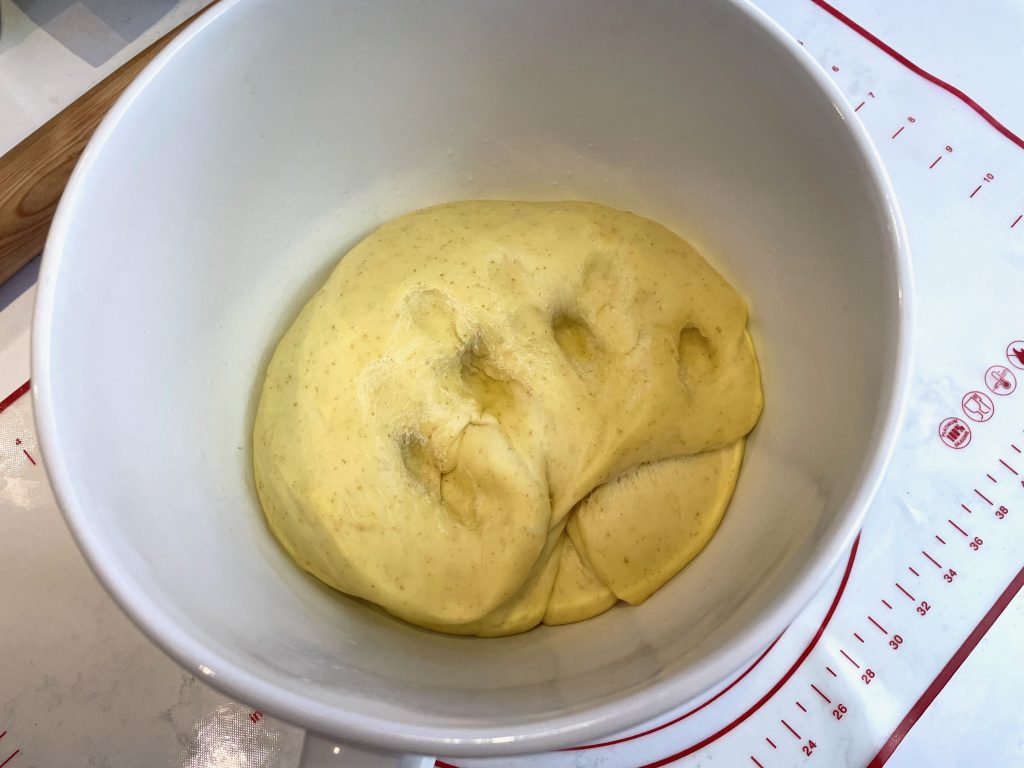 The sourdough cinnamon roll ingredients in this recipe are wholesome and heavy on the butter. (Photo taken with the iPhone 12 Pro)

5. Put a bit of flour on your rolling pin and roll out your dough into a large rectangle, about 1/4″ thick. It might shrink back a few times, so pick it up and turn it over and re-roll. Just keep working with it until it stays in place when you reach your desired size.

6. Pour melted butter all over rolled-out dough and spread with pastry or silicone brush, leaving just half an inch or so of one of the short ends without butter.

7. Evenly sprinkle your cinnamon-sugar mixture everywhere there’s butter — which should go edge to edge, except for the one short side that’s butter-free. Do not sprinkle anything there. 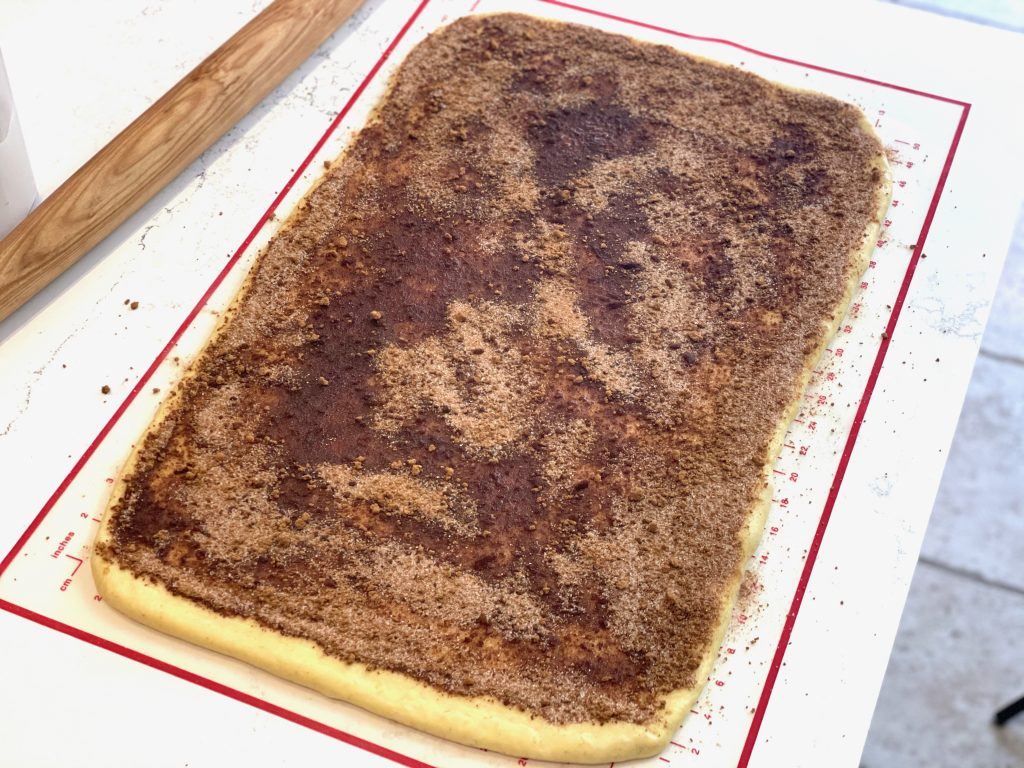 See that empty strip of dough? You need that. (Fun Fact: Making cinnamon rolls from sourdough starter means they’ll last longer on your countertop.) [Photo taken with the iPhone 12 Pro]
8. Starting with the short side that has butter and the cinnamon-sugar mixture right to its edge, gently but tightly roll up your dough toward the butter-free edge.

9. Gently pinch together the butter-free edge to the outside of your roll where it meets the dough; this will help seal the roll. 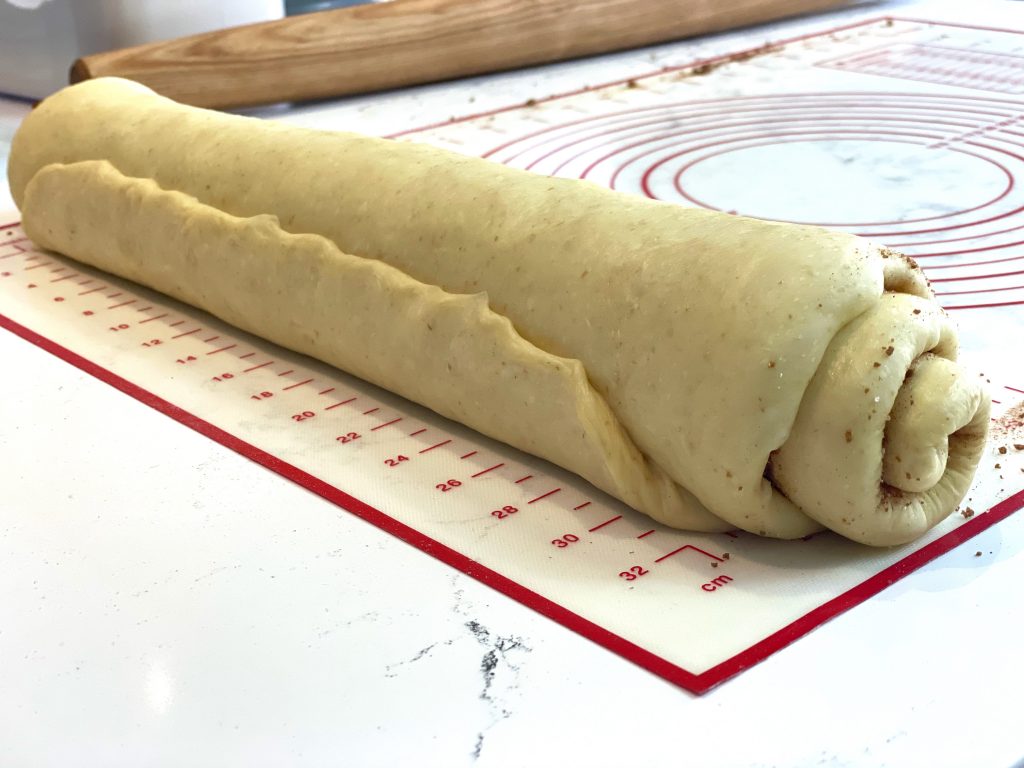 Roll and “seal” your dough so it looks like this. Warning: My sourdough discard cinnamon rolls recipe is guaranteed to become a family favourite. (Photo taken with the iPhone 12 Pro)

10. Turn roll seam-side down and, using a dough slicer, cut into 9 even pieces.

11. Arrange each piece in a parchment-lined springform pan like this: 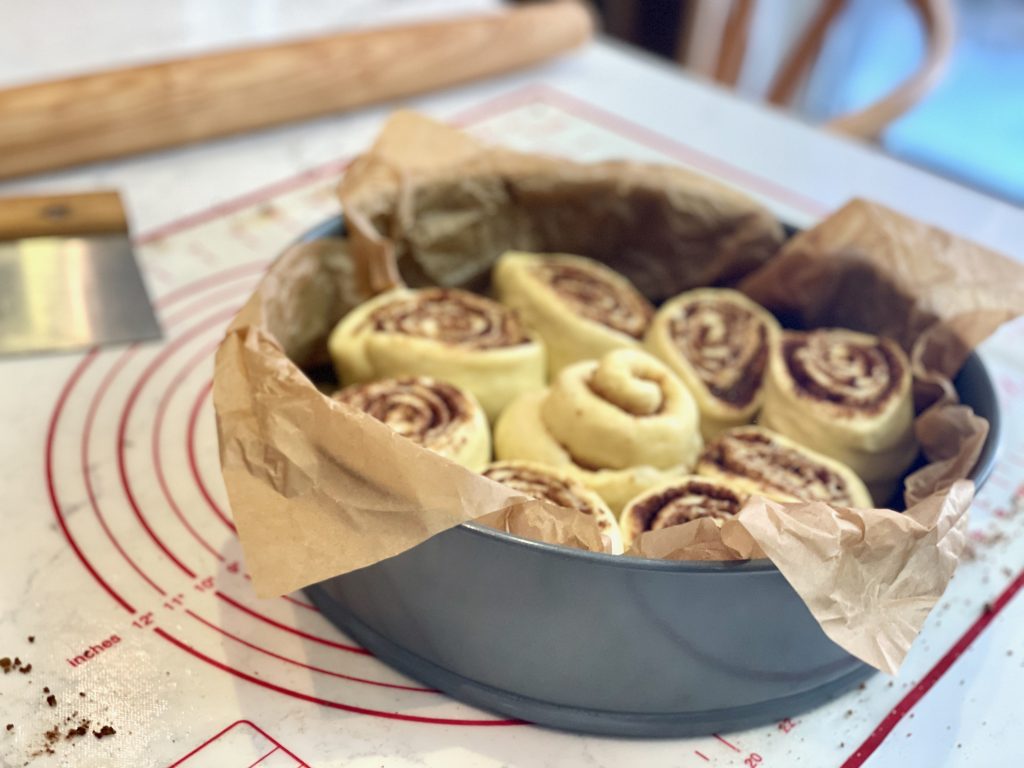 Arrange all nine pieces like this. This is the sourdough cinnamon roll recipe you’ve been waiting for. (Photo taken with the iPhone 12 Pro)

12. Cover with your tea towel and place in a warm, draft-free area to let them rise again. Yes, I’m sorry, but they still need more time. Check in an hour to see if they’ve doubled, though you may need an extra hour or even two afterwards depending on how warm or cool your home is. I’m sorry — I don’t make the rules; I just play by them. I swear we’re getting close!

I wouldn’t turn on the oven until your raw buns have doubled, because that last part of the rise on these sourdough cinnamon rolls can be unpredictable and you don’t want to waste all that heat and energy. They can’t rise too much, so don’t worry about overdoing it.

See the difference between the last pic of this arrangement and this one? This is the kind of expansion you’re looking for: 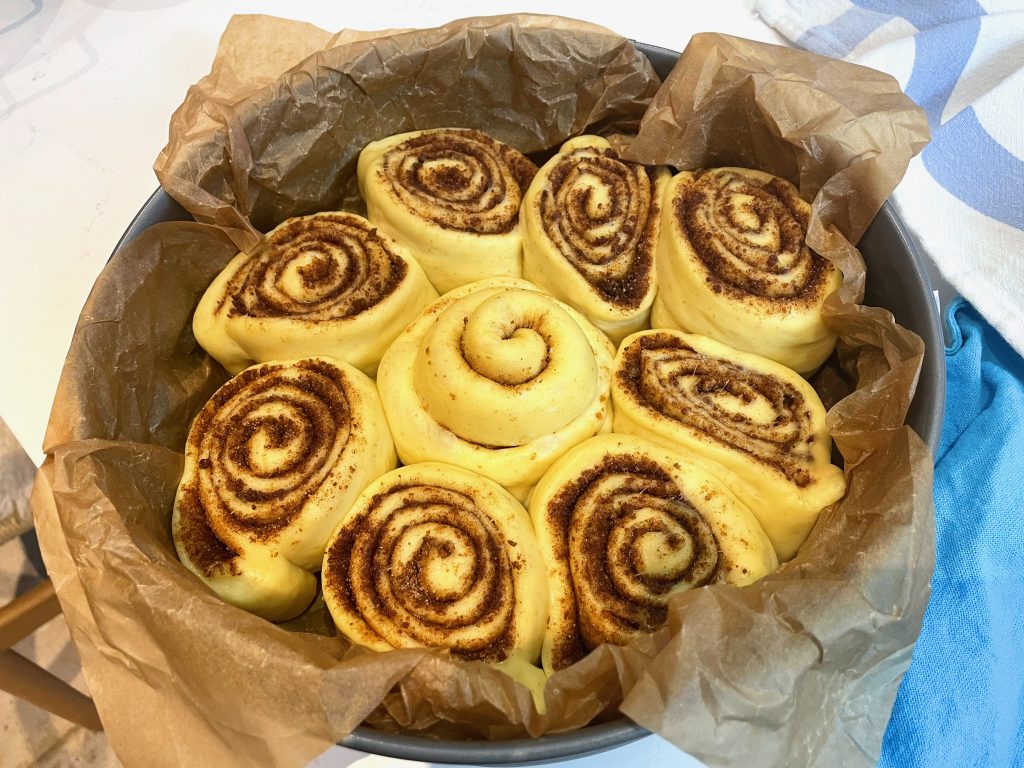 Your waist may not need to know how to make sourdough cinnamon rolls, so this comes with fair warning! (Photo taken with the iPhone 12 Pro)

When they’re ready, heat your oven to 400F (convection bake setting). After it reaches 400F, bake uncovered for 20 minutes. If the tops are a beautiful golden brown at the 20-minute mark and the dough sounds hollow when you tap it, they’re done. Mine took 23 minutes, but everyone’s oven is different, so just keep checking every 2 to 3 minutes after the first 20.

While they’re baking, make the icing…

1. In a medium bowl, using an electric mixer on medium speed, beat together the butter and cream cheese until there are no lumps.

2. Add the vanilla and beat until incorporated.

3. Add icing sugar and salt, turn mixer to lowest speed and carefully beat the mixture — only turning up the speed once all of the dry ingredients are fully incorporated. Blend icing thoroughly.

4. Add cream and blend on medium-high speed. If you feel like the consistency of your icing is thicker than you’d like, you can add more cream — about a half tablespoon at a time. Just keep in mind that you’ll be icing your sourdough cinnamon rolls right out of the oven and the icing will get thinner from the heat.

5. Once your sourdough discard cinnamon rolls are out of the oven, spread on as much or as little icing as you like. Serving these warm is ah-mazing, but they also keep well on the counter covered in tin-foil for a few days. 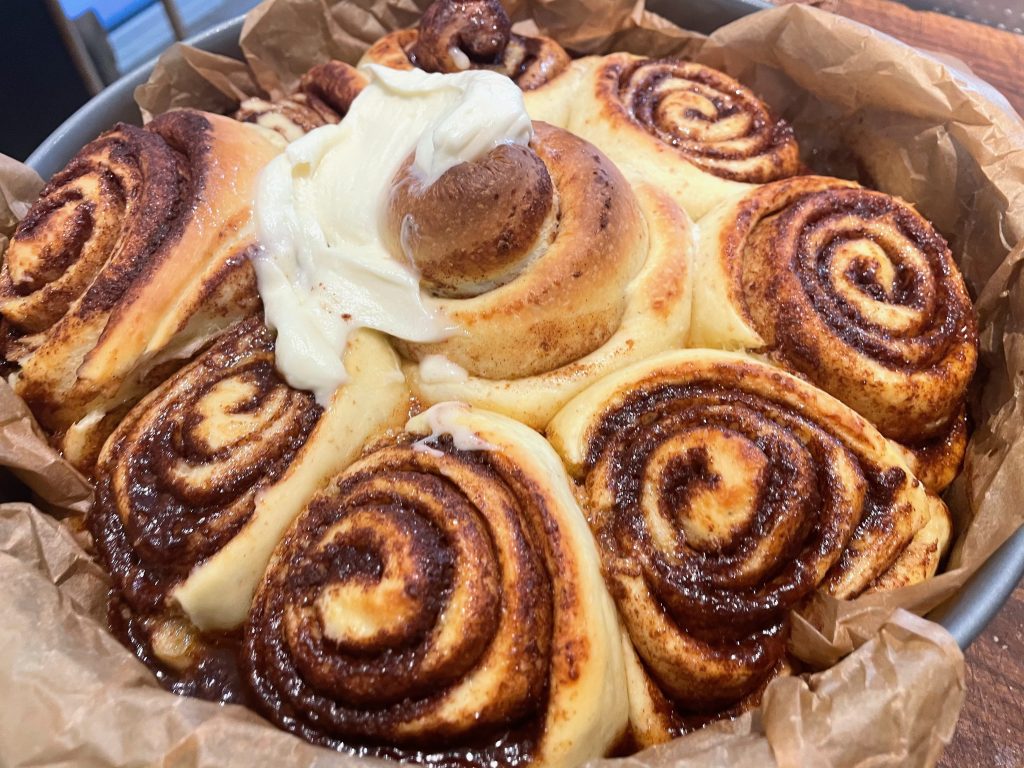 Look for this kind of colouring before you turn off your heat. In this sourdough discard cinnamon rolls recipe, you’re going to ice those buns right out of the oven. (Photo taken with the iPhone 12 Pro)

6. OPTIONAL: add chopped walnuts all over the top of the icing. (Do it! So good. Unless someone is allergic and will die. In that case, do not add the nuts.)

If you make these, I’d love to hear how it goes! Do you agree with Big B that these sourdough cinnamon rolls are better than Cinnabon? 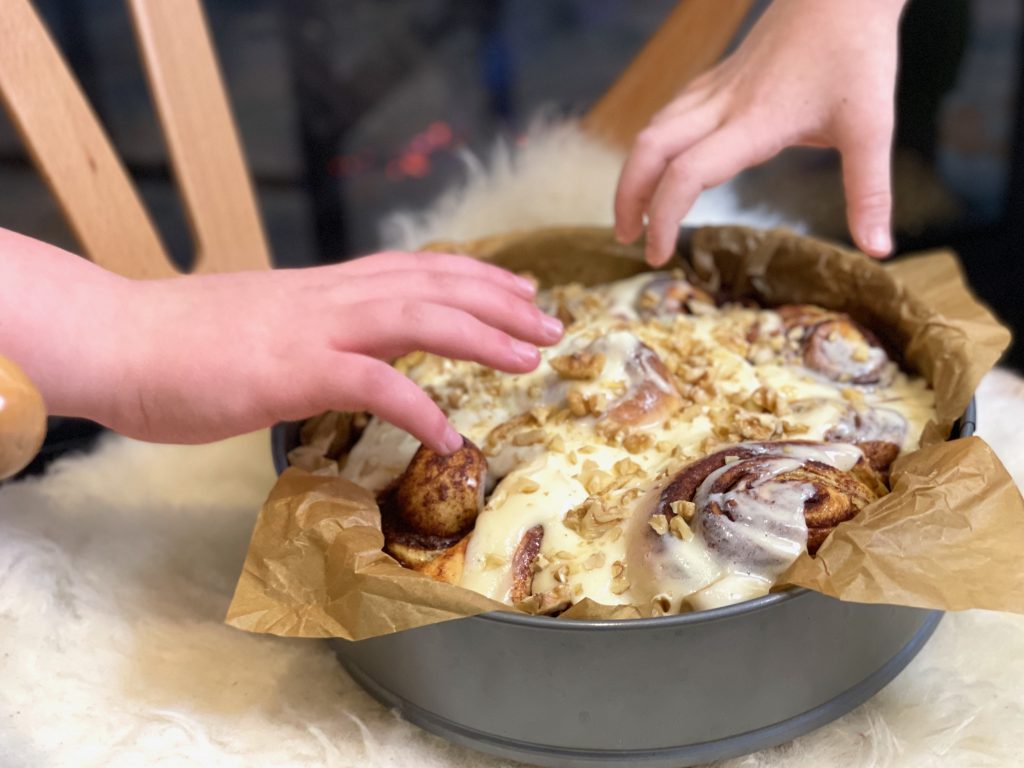 There are no better sourdough cinnamon rolls out there. I swear. I’ve tried them. My kids will back me up on this one. (Photo taken with the iPhone 12 Pro)

Wanna make other sourdough things? How about…