You’re going to have to picture this: I’m in beautiful Niagara-on-the-Lake having dinner at a winery, wearing a bamboo jean chemise dress with sky-high Michael Kors snakeskin heels. Full makeup, hair freshly blown out. And then there are two Springfree Trampolines just outside our dining tent, primed for our group of full-grown humans to review in real life: 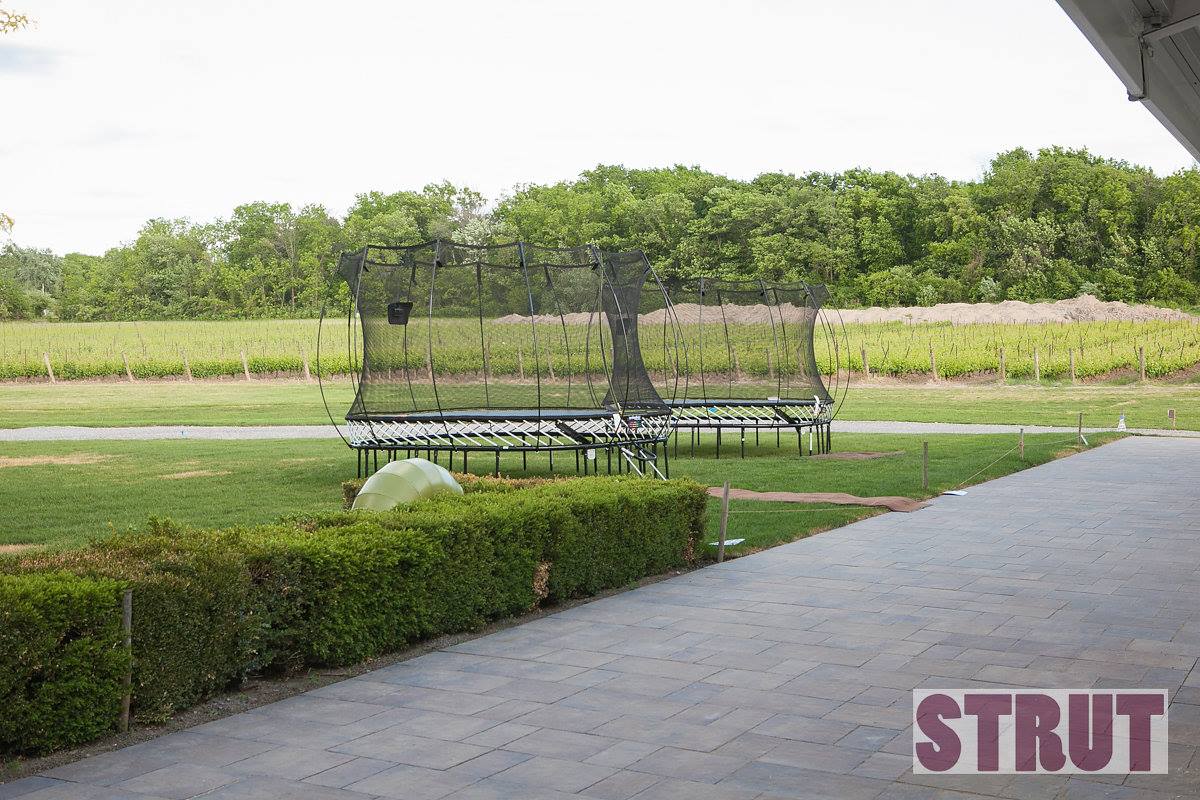 Because this isn’t an ordinary dinner with Big B in one of the most romantic settings — Chateau des Charmes’ vineyard. No, it’s part of an intimate conference for digital influencers, and Springfree is one of the sponsors.

We’re told that in between courses, we’re invited to test out the trampolines which are, of course, all jazzed up with the new tgoma gaming hub (more on that later). There are two Springfrees up for grabs and they’ll go to the two high-scorers on a game called Alien Stomp (think Whack-A-Mole, but with your feet).

The smarties at Springfree brought sporty shorts that those of us wearing frocks could put on, and I did. With gusto. It was quite a look with my dress hiked up: 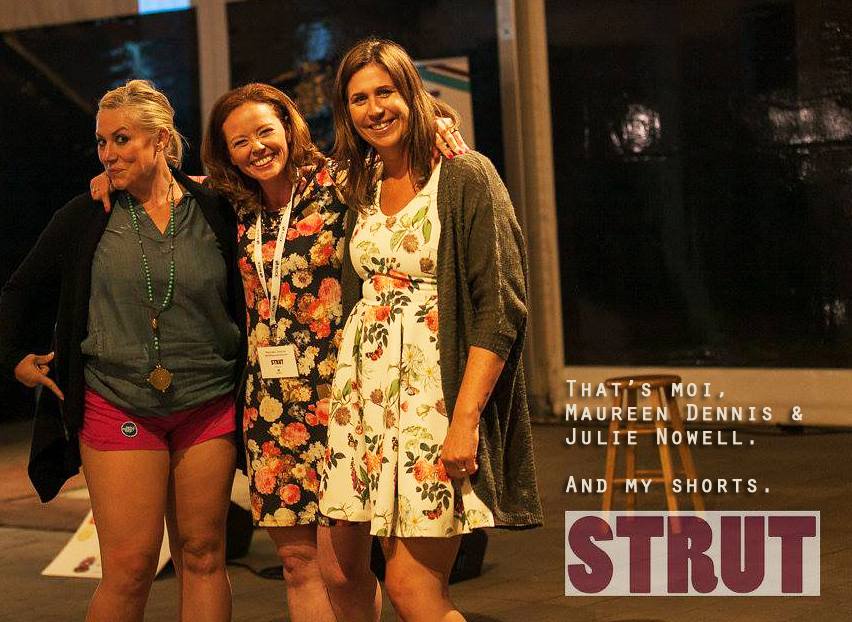 I may or may not be ultra-competitive, but as much with myself as with others so I kept going back onto the trampoline to beat my previous score. I started with a score of 19 and ended with a 74 about six tries later. Sadly, it was two points away from winning — but my darling blog-o-friend Julie from 3 chickens and a boat (see above pic) very graciously passed her high-scoring win onto me since she already had a Springfree Trampoline. WHA?!? Yeah – for reals.

So we managed to order our trampoline and have it installed two days before The K Man’s 8th birthday party. Ah-mazing.

Editor’s note: looking back on this several years later in 2019, I can tell you that my kids STILL jump on our trampoline every day in good weather and the novelty hasn’t worn off. This Springfree Trampoline review is still as strong as ever. The only thing to look at more closely may be prices listed in this post, which were from 2016.

The first bit of good news we got was that we were being far too conservative with the size of trampoline we could fit on the one remaining patch of grass in our otherwise heavily landscaped backyard. Based on the guidelines on Springfree’s site, I initially selected a medium round because we only had a space that was about 16’x16′. However, I am so glad that Springfree’s team talked me into a slightly bigger size. We ended up with the large square and couldn’t be happier — and we had plenty of room for it.

If you’ve ever been on a “normal” trampoline — even one with a net around it — you immediately feel the difference in overall jump quality and safety when you set foot on a Springfree Trampoline. And that’s because the company has designed it with safety in mind, moving all of the springs out of the jump space and creating an entirely spring-free (hence the clever name) experience. They also engineered netting and supports around the netting that will catch a 220-lb. adult and gently toss them back toward the middle of the mat if they manage to jump astray. Beyond that, the netting is actually built to withstand the force of an SUV’s impact. There are no metal edges (in fact, I think the only metal at all is the frame, which is well below the springs so your body never comes in contact with it), no hazardous zones with shifty padding narrowly covering it. I never got a trampoline for my kids because they just never seemed safe. THIS IS SAFE.

Can I just tell you how much freakin’ fun we’re having on this thing? It’s not unusual for my kids to race downstairs each morning, in PJs, to get in a few jumps before breakfast. And although I recognize that it’s still a novelty in our yard, it’s superseded the very expensive inground pool we have — even for the kids’ friends who come for swim dates.

Let’s just say that everyone is sleeping really well at night. If you want to encourage your kids to be outdoors and more active, a Springfree Trampoline is a great way to accomplish both — even without tgoma.

I love that our trampoline is all-weather and doesn’t even need a protective cover on it during winter. We were told to simply brush off the snow with a broom and it would otherwise take care of itself.

Cost has to go somewhere in this review and since these trampolines start at $1,299, we simply have to calculate price-per-use here. Using the size that I won, at $2,099 (plus HST, it’s around $2,300 total), consider that this is realistically a three-season activity. And if each season is 90 days, we arrive at 270 days a year of potential jumping. In one year, it would cost each of my kids about $4 for each of those 270 days to pay for this trampoline. I suspect that most families would get at least five years of solid trampolining in (that’s 1,350 days in case you were wondering), so for a family with two kids, it’s around 85 cents per day per child to claw back the cost of your $2,300 Springfree Trampoline. How many activities do your kids currently do for 85 cents a day?

Although Springfree recommends one jumper at a time, I’d be lying if I told you we follow the recommendation. We don’t — unless we have the tgoma system going (I swear I’m getting to that…). And while we recognize that we’re putting some risk back into an otherwise safe activity, let’s be honest: it would be super boring to just jump by yourself all the time. The thing holds 1,100 lbs. at any given time, so I’m pretty sure they’re expecting you won’t follow the reco either. But…legalities. So use your marbles. 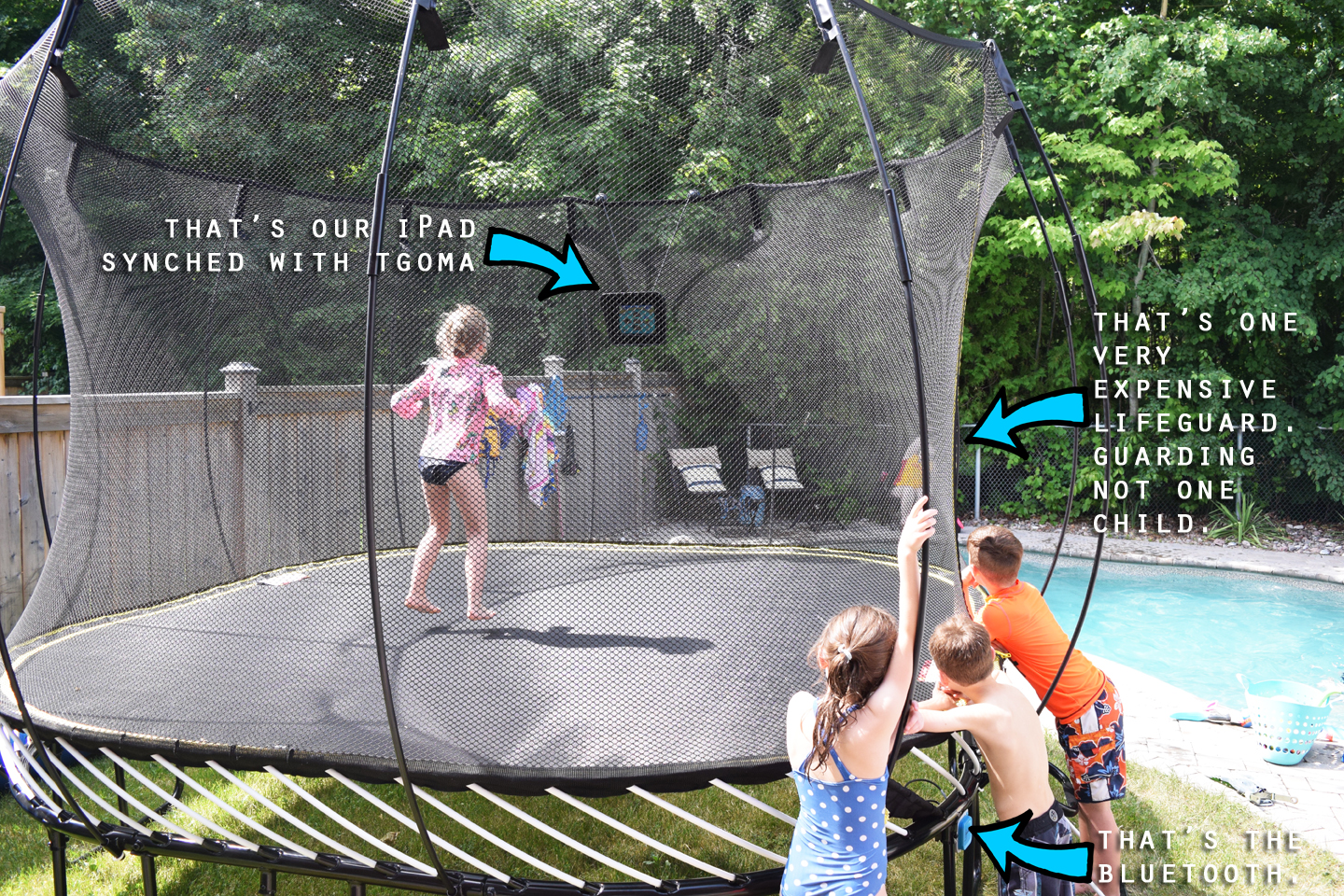 Because it’s like nothing else on the market and it’s hard to wrap your brain around WHY anyone would want to digitize an old-skool activity like jumping on a trampoline, I created a short video to try and show you the basics:

Here’s a fact: the average school-age child is consuming 60 hours of digital media (including gaming, TV, YouTube vids, etc.) per week but fitting in a mere 60 minutes of physical activity in that same week. If your reaction was the same as mine (“Well! Not my children!”), I guarantee that yours — like mine — are still not getting enough cardiovascular exercise. And that’s because we’re all just a little too addicted to technology.

The makers of tgoma partnered with Springfree to bring gaming outside and make it immersively active. Using an iPad or similar sized Android tablet, it fits into a TV-shaped apparatus that hooks onto the trampoline net and uses a little Bluetooth cube and sensors all around the mat to accurately track your jumps — where they land, how many, and so on.

There are currently seven different games and activities on the free app, and I wouldn’t be surprised if there are more to come. You can choose to measure your skills alongside other players who are logged in around the world; you can use it for an intense exercise (think Skyrobics at SkyZone); your kids can reinforce numeracy and literacy skills; or you can just smash alien heads into the earth. Whatever your fancy.

After years of HEAVY use and typical (often harsh) Canadian weather, our trampoline still looks and jumps like brand new. And, no, we have never done anything special to keep it looking that way. 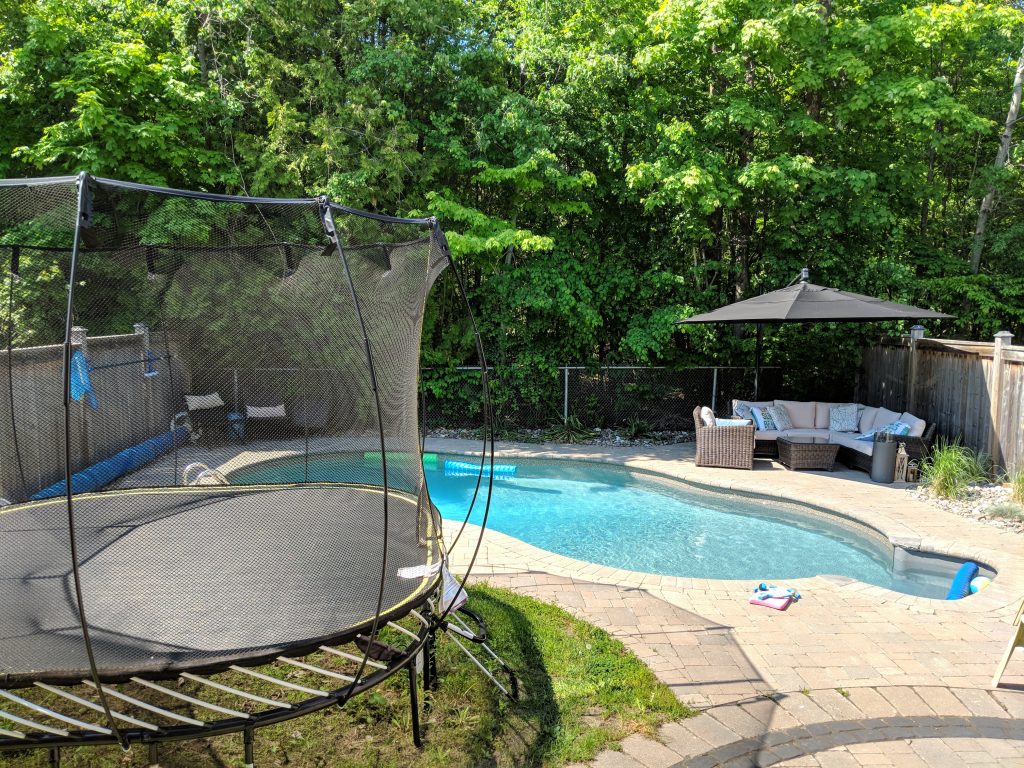 The connectors, nets, floor — everything still looks like new.

But here’s another fact: my kids just don’t bother with the tgoma system at all anymore. They may have been interested for the first couple of months but after that, they went back to basics, and have never asked for it since. And that’s fine by me because they just want to be out there jumping together in the fresh air. So to me, invest in something else for your Springfree — like the FlexRhoop basketball net (awesome) or the step for your trampoline (essential) — and leave the tgoma out of the equation.

For the cost of a Springfree Trampoline, I feel pretty strongly that the ladder should be included. Yes, there are often deals on Springfree’s site that throw the ladder in with purchase but if you don’t happen to catch a deal, it’s another $100 for the ladder. And even adults will find it challenging getting in and out without one.

DIY installation is said to take about two to three hours and known to cause fist-waving. And not in a fun, club-kid kind of way with glow sticks. In an angry Grandpa kind of way. So although it isn’t exactly cheap, I recommend paying to have Springfree install your new trampoline.

Springfree is a no-go zone for Big B. Poor guy. He can’t get on most of the rides at Canada’s Wonderland and now this. Even though the trampoline’s surface can take 1,100 lbs., an individual jumper’s weight limit is 220 lbs. The guys who set it up for us suggested that perhaps if he stuck to the outside and jumped softly, we’d be OK but when we tried that, our Springfree made a hideous “crunching” sound that I’m pretty sure translated to “GET THE HELL OFF OF ME!”