Have you heard some children’s CDs out there? Seriously, there’s some real crap. Terrible rhymes, annoyingly high-pitched voices and messages that aren’t really my idea of values I wish to instill. Sometimes I wonder if these so-called children’s entertainers are really just failed musicians who couldn’t hack it in the big leagues.

That’s why it’s so refreshing when a musician comes along who’s a natural, perfectly suited to the genre. And who seems genuinely interested in making music for kids rather than just making a quick buck.

We own more than a dozen kids’ CDs – Squishy Banana by Oso Simple is probably our favourite. Not because we happen to know the artist personally, but because the music is simply great. 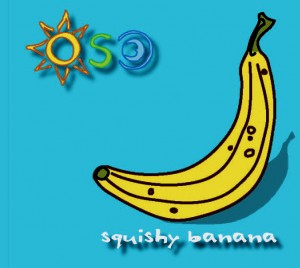 The lyrics are catchy, and the melodies are the type that have you humming them later in the day when you’re by yourself folding laundry. The language is appropriate for even the youngest kids, and sometimes I catch myself chuckling because a line stands out as so clearly written for the parents (like when you’re watching Cars and Mater makes a remark that has you – the adult – rolling on the ground…unless that’s just me).

I like that Oso isn’t trying to be a rockstar to the under-10 set. He plays a mean guitar and many of the tracks on Squishy Banana feature some young singers, too.

With other songs, like “Chaos in the Kitchen” and “I am Beautiful,” somehow this musician, who doesn’t have kids of his own, manages to nail the realities of our world and helps us share important messages with our kids.

You can even book Oso for a party or concert!

Oso Simple only has one album. We really want another one!