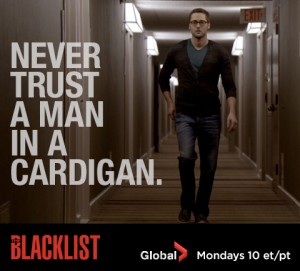 No. I really don’t think you should.

You know that moment when you get hooked on a TV show? When you decide that PVR’ing it simply will not do and you need to watch it with the rest of the country every week?

For me, that moment came within the first 15 minutes of The Blacklist. I hadn’t watched the premier, but my husband came home from work later in its first week saying that “the guys” were raving about it. So, like any good couple who count TV-watching among their favourite hobbies, we found it On Demand.

And I was completely smitten. I immediately set the PVR to record the entire series, but barring one night when I had a wicked migraine, I’ve watched every other week during it’s regular timeslot. I dare not wait. I dare not chance the spoilers.

It’s the smart, witty writing. It’s the plausibility that these kinds of dastardly characters probably exist in FBI files. It’s the oozing charm of Raymond Reddington (played by the talented James Spader) that I can almost smell through my TV. He’s the bad guy with whom you fall in love and who you root for episode after episode.

I watch The Blacklist like I used to watch House: always wondering whether the script is simply clever and imaginative or pulled directly from files that were never meant to make it to TV Land.

Either way, I am engrossed. Week after week, drawn in like Miss Q is to Barbie’s Life in the Dreamhouse (which is actually also very witty, as an aside), barely stirring through the hour for fear of missing some crucial piece of dialogue that’s whipped from Red’s stinging tongue. I don’t even know how I’m going to tweet during the show on Monday night because The Blacklist’s pace doesn’t leave much downtime.

Last week’s episode was pivotal. When it was finally revealed that the protagonist’s husband, Tom Keene (Ryan Eggold), really is up to some shady stuff, I nearly kept through my TV to strangle him. (I’m passionate, OK? Don’t judge me.)

So now’s the time to start watching, lest you be left behind in the dust as this story gets more tangled.

Check out this awesome Vine for a six-second tease. Oh, and watch out for a flash giveaway of some cool swag from The Blacklist on my Facebook page Monday night.

DISCLAIMER: This post and the accompanying social media amplification was sponsored. However, my opinions are mine and mine alone and I freakin’ love this show.