If you’re classic Type A, my guess is that you read everything you could get your hands on when you were pregnant with your first baby. I know I did.

So although I’ve simmered down tremendously on the book front and started to simply “parent from the gut,” when the opportunity came to review a DVD called The Golden Opportunity of Child Development, I was intrigued. Created by Ula Lubin – a child development consultant – in co-operation with child psychologists, the $14.95 DVD spends 40 minutes exploring the impressionable early years of cognitive and social development and how we, as parents, can make a positive impact.

There were some really salient points made throughout the DVD, including: 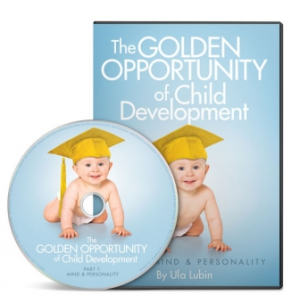 Although I feel like most of us know this, I was glad to be reminded that children learn primarily through modelling. I have a really short fuse with my husband sometimes (look – you know how it is: after 10 years of making lists and 10 years of having things that are CLEARLY on the list not come home, one gets more quickly frustrated year after year). But I have to stop making comments in front of my children. I need to be the grown-up and take it up with Big B after they’re in bed if I can’t calmly discuss it in the moment. They’re watching, and I don’t want them to end up with my impatience.

Many of the messages on the DVD echo that song where the father is too busy to play and talk with his kids, and later they have no time for him when he’s an old man and craving a relationship with them. I can’t remember the name of the song, but I remember the message – and it’s an important one.

There was an emphasis on the importance of goal-setting. I felt a moment of achievement when I likened this to our sticker chart! To encourage trying new foods, sleeping until wakeup time (which is predetermined by The K Man’s Gro-Clock), printing his name and a series of other desirable behaviours, The K Man earns stickers. Every 10 stickers, he gets a treat. Yes, this is also called bribery. Baby steps.

What’s really stayed with me is the message about letting kids be their own people. The DVD’s experts say that when you give your child a toy, it belongs to them. Don’t tell them how to play with it and don’t prevent them from breaking it. If they break it, they’ll understand the responsibility they have in the ownership of their things. This is basically anti-helicopter parenting.

I have to be honest: the voiceover guy is horrible. Very breathy, like some radio-man doing the late-night romance shift.

One of the messages was to speak to your child like s/he is your friend. Huh?! I’ve watched enough Dr. Phil to know that you have to be your child’s parent – not her friend.

At one point, the DVD spends a pretty significant amount of time (considering it’s only 40 minutes long) teaching us how to use a blanket as a tent, a bed, a fort, etc. It was pretty patronizing. I mean, seriously, I don’t need creative direction when it comes to blanket usage.