It’s important to me to raise children who appreciate the arts. Who are inspired by worlds that come to life on a canvas or the stage, through song and dance, and with the kind of interpretation envisioned by playwrights, imagined by costume designers and played out through an actor’s lens. But to raise these kinds of kids, I need to take them to musicals and plays and galleries — again and again and again. Enter The Horse and His Boy — this summer’s family-friendly performance at the Shaw Festival — on until July 21, 2019.

It won’t matter if you took the family to see The Magician’s Nephew last year, the official first installment of C.S. Lewis’s beloved Narnia book series. Because this performance stands on its own beautifully. And that’s perhaps because even in Lewis’s world, the chronology of the series was a tad up for grabs.

The Horse and His Boy is a story in equal parts about magical, talking horses trying to find their way back to Narnia and their riders — one, a lonely boy (Shasta, played by Matt Nethersole) who ultimately discovers he’s so much more than he ever believed; and the other, a spirited girl (Aravis, played by Madelyn Kriese) running away from a fate to which she knows she doesn’t belong.

It wouldn’t be a Shaw Festival performance without whimsical costumes and sets that change dramatically thanks to the artistic use of projection. The monochromatic, paper-made wardrobes from last year’s show have given way to brighter colours, fierce armour, bold feathers, and the most clever use of a saddle on wheels to help create an on-stage horse (featuring a literal pony-tail, no less). 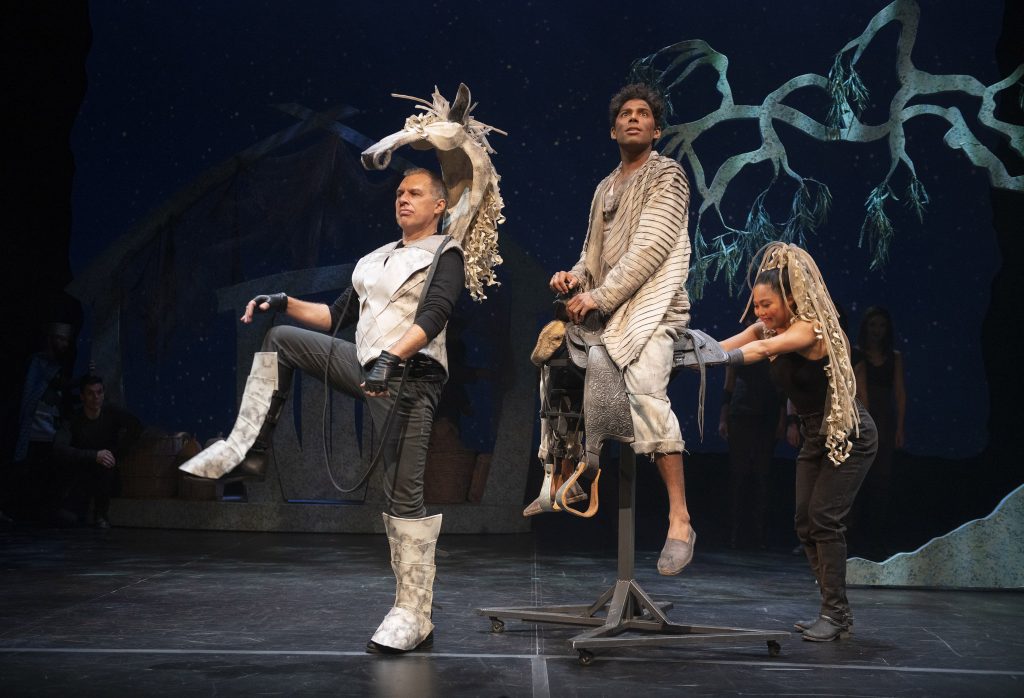 Directed by Christine Brubaker, Anna Chatterton’s world-premier stage adaptation of The Horse and His Boy is less abstract in its execution than The Magician’s Nephew, which I think will appeal to an even wider audience. There are also more laughs and overall it seems to move a bit faster, too.

With a running time of about two hours — including one intermission, perfect for those pesky pee breaks! — The Horse and His Boy is recommended for kids who are six or older. That said, you know your child; if your four year old is unseasonably refined and has managed to sit through a three-hour ballet with ease, just ignore that 6+ suggestion and get yourself some tickets already.

Kid reviews of The Horse and His Boy

My kids are nothing if not opinionated, and they both came out of the show beaming.

Days later, as we chatted at the dinner table about The Horse and His Boy, my kids were able to recount sooooo many details with vivid clarity, which tells me they really enjoyed it. But don’t just take my word for it: 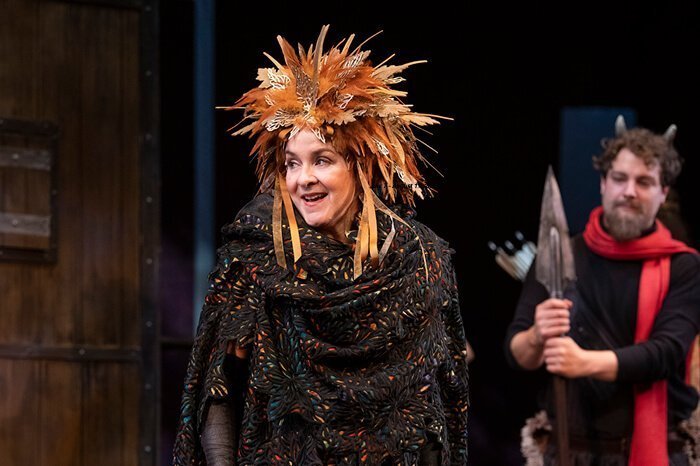 “My favourite part of The Horse and His Boy was when Aslan, the lion, appeared. The headpiece was very cool — it almost looked like leaves. The best character was Aravis because she was just like a warrior, and I love girl warriors! She made me feel so brave and strong, and I really liked that her horse’s initial was the same as mine…Q!” — Miss Q, age 8 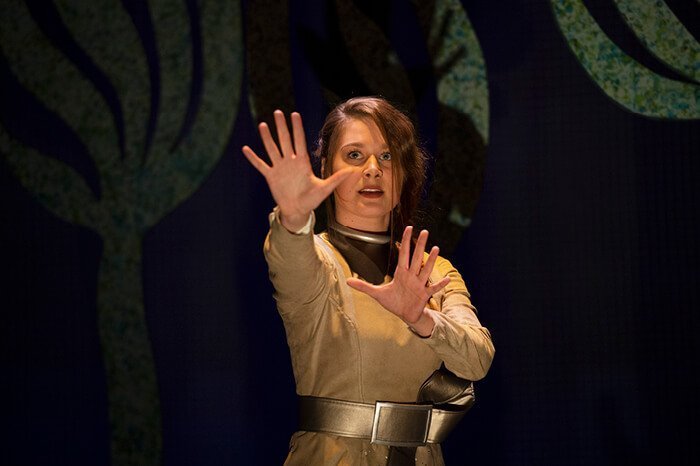 “The best part of the show is when Shasta gets lost in the forest and all of the animals surround him. He is clearly hungry and the goat offers him a teet. It was hilarious! There was lots of great humour in The Horse and His Boy, and that’s always the best. You need to make me laugh to keep me interested.” — The K Man, age 10.5 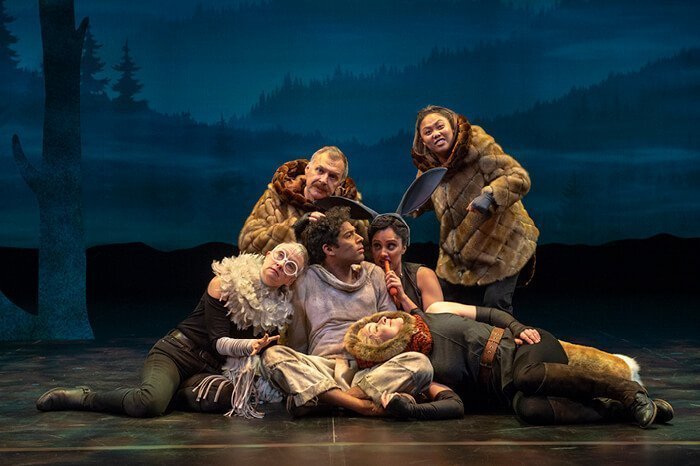 The Shaw Festival provides a unique opportunity to its young guests: an unforgettable pre-show workshop that lets them become part of the performance.

An hour before select performances of The Horse and His Boy, just $5* gets your child a ticket to an interactive, hands-on workshop where s/he can create props to take into the theatre, and learn songs, actions and phrases that are part of the show. About 40 minutes long, you’ll meet and “work” with one of the actors from The Horse and His Boy to prepare for an immersive theatre experience. 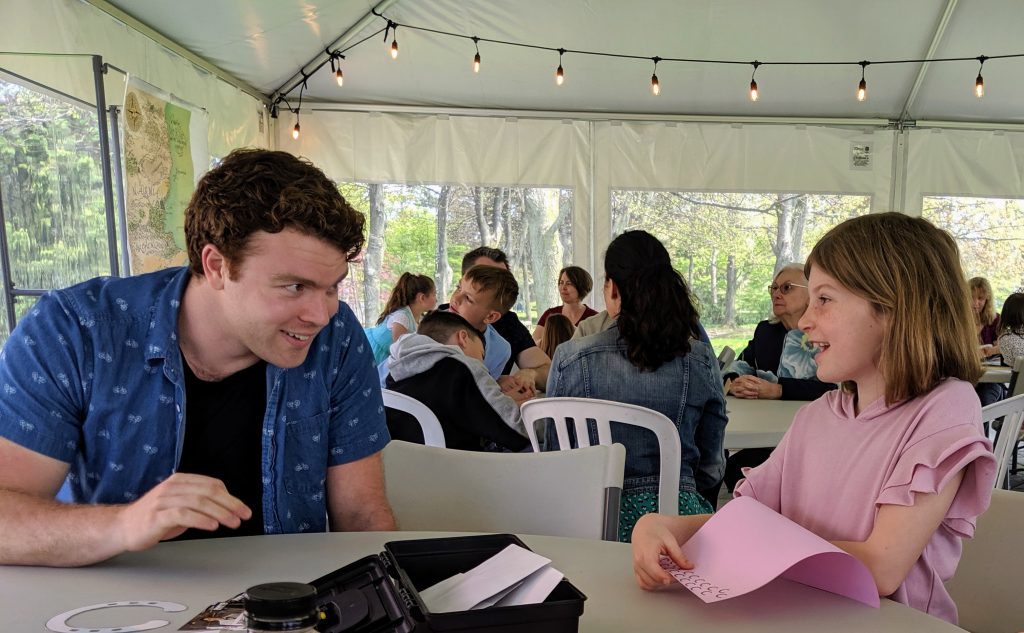 Miss Q hamming it up with actor Drew Plummer, who plays King Edmund in The Horse and His Boy.

During the performance itself, your family will share in the magic on-stage with the actors through special snapping sequences, song choruses and chants that only those in the audience who attended the workshop will know. It’s kind of like a special secret society!

We love, love, LOVE this: Shaw Festival picnic lunches! Available before all Festival Theatre matinee performances from May to October, your portable group picnic includes yummy sandwiches, personal-size bags of potato chips, homemade cookies (these things are GOLD!) and a bottled beverage…plus a Shaw-branded picnic blanket perfect for sprawling across the Festival Theatre’s lawn. 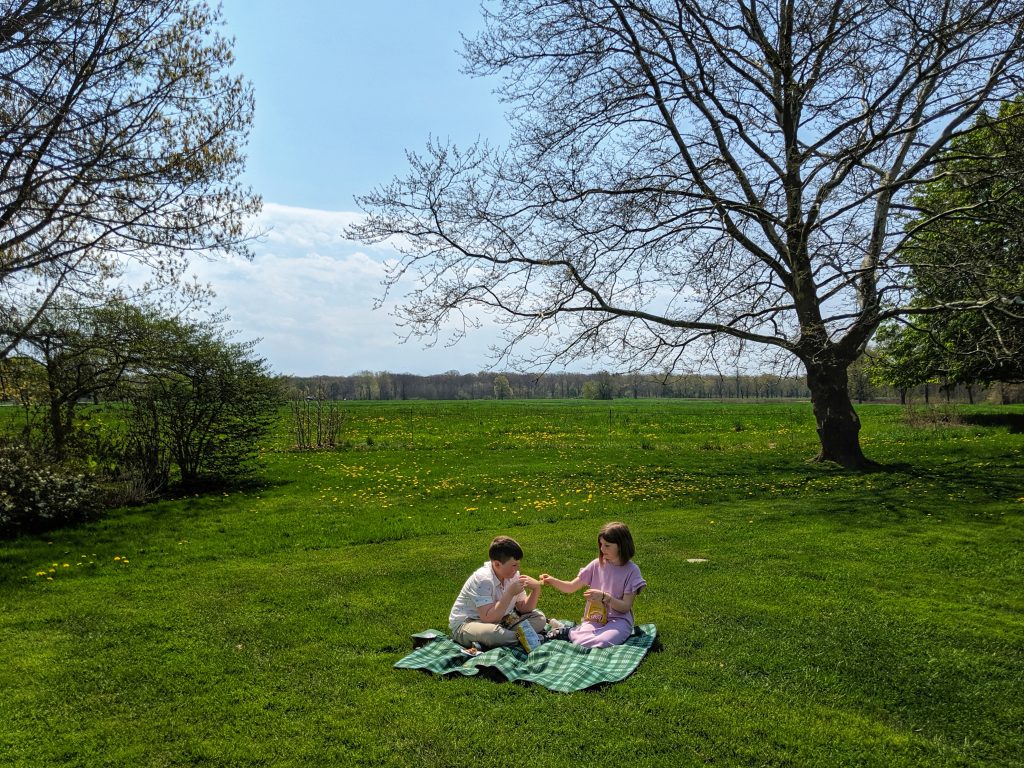 I can’t think of a better way to enjoy a family day out this summer than a picnic and a play in Niagara-on-the-Lake…can you?

WIN A FAMILY PACK OF TICKETS TO SEE THE HORSE AND HIS BOY!


* You must have a ticket to The Horse and His Boy to purchase a workshop ticket.

DISCLAIMER: As a year-long Shaw Festival partner, I have been provided with theatre tickets and compensation to share our theatre experiences with my readers. I am so honoured to be able to bring you my honest opinion about these performances, and hope to encourage you to see each one as a result.

« Child travel consent form: consent letter for children travelling with one parent
17 things to do in Niagara with kids »