When I lived in Asia back in 2000-2001, I did my share of travelling in the region. But all these years later, I still regretted never making it to Hong Kong. I’d been to mainland China, but never the unique city that was under British rule until just a few years ago.

Still very British in many ways — driving on the left and one of the best underground tube (subway) systems in the world — Big B and I spent three fabulous days exploring the sights, sounds, smells and tastes of Hong Kong. And we made The Mira hotel our home away from home while we were there. 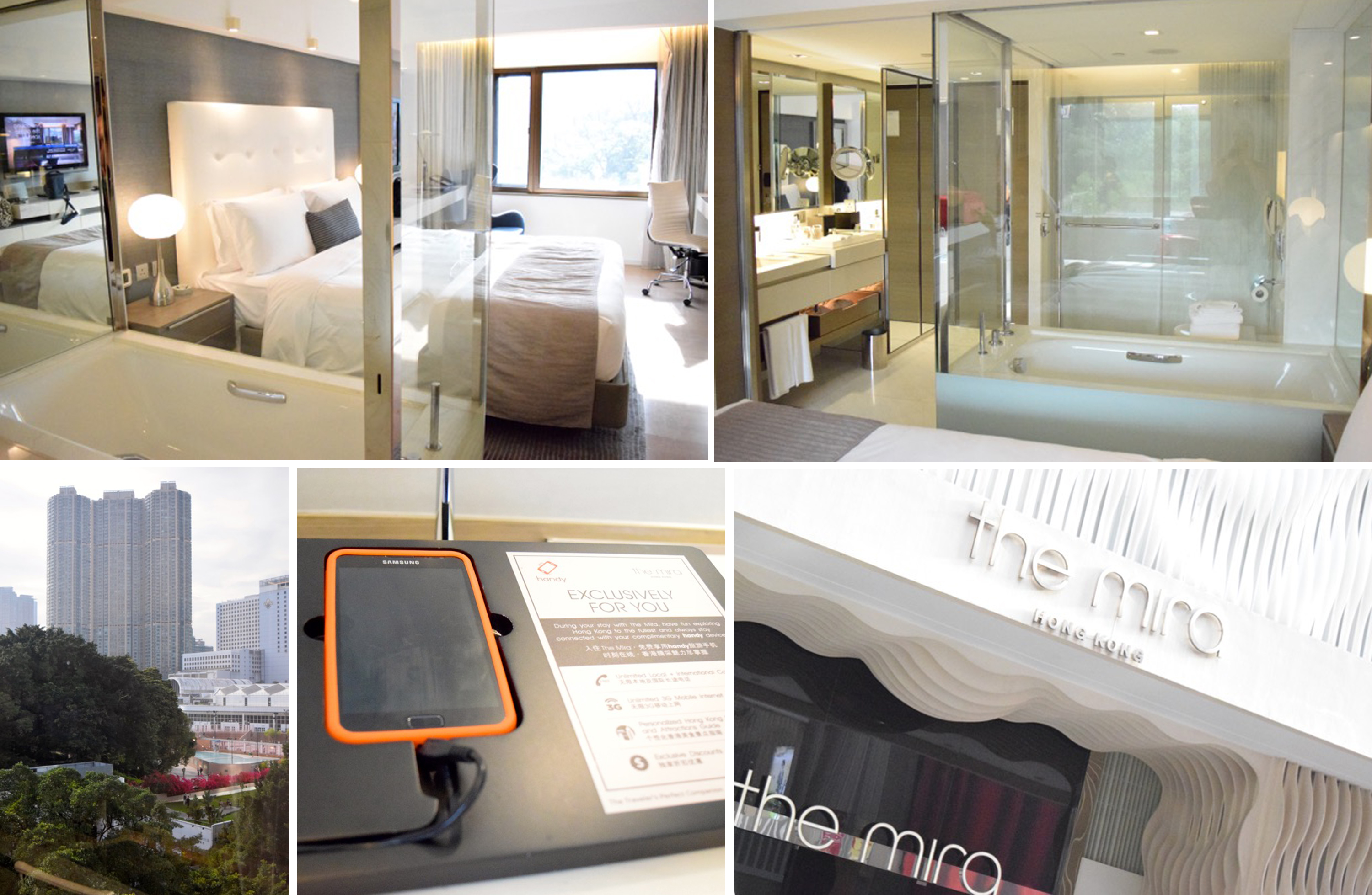 Centrally located on Nathan Road, less than a five-minute walk from the Tsim Tsa Tsui MTR station, The Mira is easy to find as soon as you land in Hong Kong. Take the fast and inexpensive Airport Express from the airport (HK$90 each or HK$140 for a two-person pack) to Kowloon Station and either hop on the MTR or jump in a taxi. The former will run you about HK$15 each or the latter around HK$60 total, including two suitcases and tip. Once you’re settled in, it’s easy to get out and explore by foot. Right across the road is the MiraMall — a huge shopping centre with tonnes of international brands and an unmissable, gigantic plush MiRabbit hung from the ceiling in the atrium — and to the other side, Kowloon Park — which features about a dozen statues of animated superheroes, banyan trees and stunning flowers. You’ll probably see groups of older adults doing tai chi, and if you walk to the north entrance of the park, you can also find the beginning of Shanghai Street. Only a 10-minute walk south of The Mira, and you’re at the famous harbourfront.

Because space is at a premium in Hong Kong, it’s pretty rare to find rooms with king-size beds. A must for my 6’6″ husband. Not only do many of the standard rooms at The Mira have king beds, but they also offer a one-foot extension upon request, making the bed super-duper long.

The rain shower is full of hot water with unwavering temperature and excellent pressure. And it’s spacious enough for two.

The vanity is beautiful, and there’s a mirror for closeup makeup application, which these 40-year-old eyes really appreciate.

So. Much. Light. Because the shower, toilet and bathtub enclosures are all glass, the natural light coming in from the windows floods the entire room. We never needed the lights on during the day.

The room décor is stunning. A contemporary Arne Jacobsen Egg Chair sits in one corner, flanked by a full length bevelled-edge mirror in which you can do a killer selfie and check your outfit head to toe before heading out on the town.

Your bed at The Mira will wash away any residual jet-lag. It’s extraordinarily comfortable and swathed in beautiful linens. And if the already-amazing pillows don’t suit you, there’s a Pillow Menu with seven other options, including buckwheat-filled pillows, body pillows and lavender-scented pillows. If I’d brought more than just carry-on luggage for this trip, I dare say that The Mira would have seen two fewer pillows on the bed when we checked out. They were THAT cozy.

If you’d rather stay in the hotel to dine, there are heaps of options. Yamm puts on a fantastic buffet breakfast, and there’s no beating Cuisine Cuisine for an all-you-can-eat (and all-you-can-drink!) dim sum lunch. There’s an outdoor patio that really gets going after dark, and a wine bar with a unique twist: at-cost wine. No markup. You read that right.

Probably my favourite part of our stay at The Mira was the Heat Experience Zone. Down on level B3, there’s a stunning swimming pool, and when you wander into the men’s and ladies’ areas, you’ll find free lockers (that are actually big enough for all your stuff), a hot tub, a row of private showers with two showerheads (one rain, one handheld), a sauna, a steam room and — the pièce de résistance — the Floatation Lounge.

The Floatation Lounge deserves its own paragraph. Because it’s the epitome of total relaxation. Picture three single-sized waterbeds, shrouded in soft, translucent netting. Add a magazine rack and spa music, plus dim lighting, and you’ve found the perfect place to either unwind after a long flight or replenish your energy before you leave the hotel. We did both. And both times, fell asleep for a good two hours. There should be Floatation Lounges in every hotel. It was, well, WOW.

Staff are only too pleased to help. We encountered nothing but polite, friendly, eager staff at The Mira during our entire stay. It was certainly on par with the likes of The Langham and Waldorf Astoria.

One of our favourite perks of staying at The Mira was the free Samsung Galaxy smartphone in our room. Equipped with Google Maps, free calls to Canada and the U.S., and unlimited Internet access and data usage both in the hotel and throughout Hong Kong, we took this mobile device with us everywhere. It was invaluable as we tried to navigate Hong Kong and the island by foot, or locate an MTR station. We called home several times on their tab, much to the delight of our children and parents. Such a thoughtful addition to the overall five-star experience.

Free WiFi worked in every corner of the hotel, from rooms to lobby to restaurants. Which, if you’re a social media over-sharer like me, you’ll appreciate.

There’s a Nespresso machine in every room, though we didn’t make use of ours once I discovered Hojicha tea lattes at the local Starbucks.

We had a beautiful view of Kowloon Park from our room, which was a Parkview upgrade. Personally, I’m not bothered by views because I use our hotel rooms primarily just for sleeping and grabbing a bite at breakfast. So to keep costs down, I would definitely recommend just sticking with the standard Cityview.

Unless you draw the blinds around the tub, you have to do your business on the toilet with your partner or family watching. I know for most moms, it’s not unusual to be used to peeing with the bathroom door open, but when on vacation, a little privacy is nice.

Like any five-star hotel, The Mira does not come with an inexpensive price tag. Travel during a weekend when Rugby 7s are on, like we did, and you can expect your bill to be even pricier. But if you want a five-star hotel with a king bed in one of the world’s most expensive cities, you should expect to budget at least $400-500 a night for the most basic room. We do consider this a big splurge, but it was the first time Big B and I have ever been away together without the kids, so it was worth celebrating.

The service charges in Hong Kong are standard on every bill (10 per cent) — from a drink in a bar to your restaurant bill, as well as your hotel charges. On a $500 per night stay, this really adds up and it was a bit of a shock when we went to pay.

Very low ceilings in every hallway. Because The Mira used to be a bigger hotel, when the current owner renovated, he kept the basic shell of the building but used the hallway ceilings to run new electrical and piping. So you’re left with a ceiling height not exceeding about 6’7″-6’8″ or so. Big B was always worried about hitting his head walking to our room. If you’re taller than 6’7″ — DUCK. The good news is that the ceilings in all main areas and in the rooms is much, much higher.

Running and outdoor fun with Peak Performance & Serengeti
phil & ted's Dash stroller
If you got sick, could you pay your mortgage? #InsuranceThatFits (sponsored post)

« 2015 GMC Acadia
Restaurant review: The Verandah at The Peninsula hotel »